1. That time I met and shared lunch with a train kid named Breakfast on the sidewalk in Savannah.

“You know,” he smiled as he took a bite of Zunzi’s, Shit Yeah! Sauce dribbling down his chin. “Sometimes I like to take a break from being serious when I’m standing on the side of the road holding a piece of cardboard. Instead, I’ll write something funny like ‘Need money to go to the moon’ or ‘I owe the Loch Ness Monster $3.50.’ Sometimes just seeing somebody smile or laugh as they drive by means more to me than getting a couple of dollars.”

2. That time two people who barely knew me let me borrow their car for the weekend.

I scrolled through potential Couchsurfer hosts as I sat outside the Amtrak station in Denver. My phone buzzed. It was from a 231 number.

“Hey lady! Didn’t you say you’d be in Denver right now? Do you have a place to crash?”

It was from Mary Jane — a girl who I had met over two warm pints of Old Crow at the India House hostel in New Orleans four months before with her boyfriend Dennis.

“Hey! I actually don’t.” My original host had fallen through at the last minute.

She texted me her address. Although she was planning to be gone all weekend, she invited me to stay as long as I needed.

“You can even take Dennis’ car if you want to go camping or see the mountains.”

The conversation replayed in my head as I sat atop Mount Evans at 14,264 feet in the green 2003 Oldsmobile Aurora littered with Carl’s Jr cups and Safeway plastic bags I had deemed the “Dennis Mobile.” Elk and Rocky Mountain Bighorn Sheep grazed about fifty-feet away while yellow bellied marmots scurried past yellow alpine avens into their holes as thunder rolled off mountains smeared by mist and fog. I watched drops of melted hail race down my window while pieces of ice patted the roof.
Having traveled from city to city on the Amtrak for two months, my time in nature had been limited to sunbathing in public parks and watering a friend’s corn plant. But thin as the air was on Mount Evans, it quenched a thirst for the solitude and connection to nature I had been craving — something I wouldn’t have been able to experience without the kindness of two Coloradans who had I spent a total of six drunken hours and two warm pints with.

3. That time a Kiwi let me use his solar shower.

While stopped at a campsite in the dark sky preserve area of Lake Tekapo, my partner and I met Graham — a thin, 82-year-old Kiwi with a love for plump ducks, Willie Nelson, prawn and salmon pies, and the sandfly infested campground we had made home for a few days.

“I’ve got a house somewhere else, yeah. A nice one too. But for an annual fee of $80 and being able to see all the stars in the southern hemisphere, why wouldn’t I stay here seven months out of the year? This is home to me, sandflies and all.”

Our second morning there, he invited us over for coffee. He lived in a small trailer with a neatly made bed draped by a floral duvet and walls covered in black and white photographs of Willie Nelson. A small antique radio fizzed out static as he tuned the knob to find a station.

“How are you liking New Zealand? We haven’t run you off yet, eh?” he asked, settling on a 1950s country station playing Kitty Wells.

I went into detail of getting caught in fog on the Tongariro Alpine Crossing, blackwater rafting in the Waitomo Glowworm Caves, drinking a beer at the Green Dragon, and eating pumpkin enchiladas. “But,” I continued. “Living in a Nissan Cube means we pretty much always look and smell terrible.”

His eyes lit up. “I’ve got this handmade solar shower if you’d like to use it.” He reached for a plastic jug from under his bed.

He took the boiling water that was going to be used for coffee and poured it into the jug. As he walked me over to the showering area, he picked a couple of purple flowers to replace the dead ones wilting in a vase at the foot of the paint chipped shower door. His old and leathered hands shook as he tied up the jug, explaining to me how it worked.

“Thank you, Graham. But you don’t have to do all of this.”

“Well,” he grunted as he pulled the shower higher. “Sometimes I like to ask myself ‘What would Willie do?’ I think Willie would help as many people as he could. And if you’ve been sleeping in that cube car for a month, you need all the help you can get.”

4. That time there was a restaurant in Melbourne that allowed you to pay as you feel.

While exploring St. Kilda in Melbourne, we walked into Lentil as Anything — a small vegetarian restaurant radiating with a warm and bohemian atmosphere.

Upon sitting down, we were asked if we had ever been in before. We said we hadn’t.

One of the servers explained that their mission was to be a “pay as you feel” restaurant where customers had the opportunity to contribute towards a world of respect, trust, freedom, and equality. “Money should never divide us. Everyone has the right to feel valued and equal.”

“That’s incredible,” I responded. “But has it ever made it difficult to stay open?” I looked over at the wooden box with a small slit that acted as a cash register.

“Well, we’ve been opened for over 13 years now,” the server laughed. “So we must be doing something right.”

5. That time an Irishman sat with me on a fire escape in Philadelphia and told me about his patient Simon Fitzmaurice. 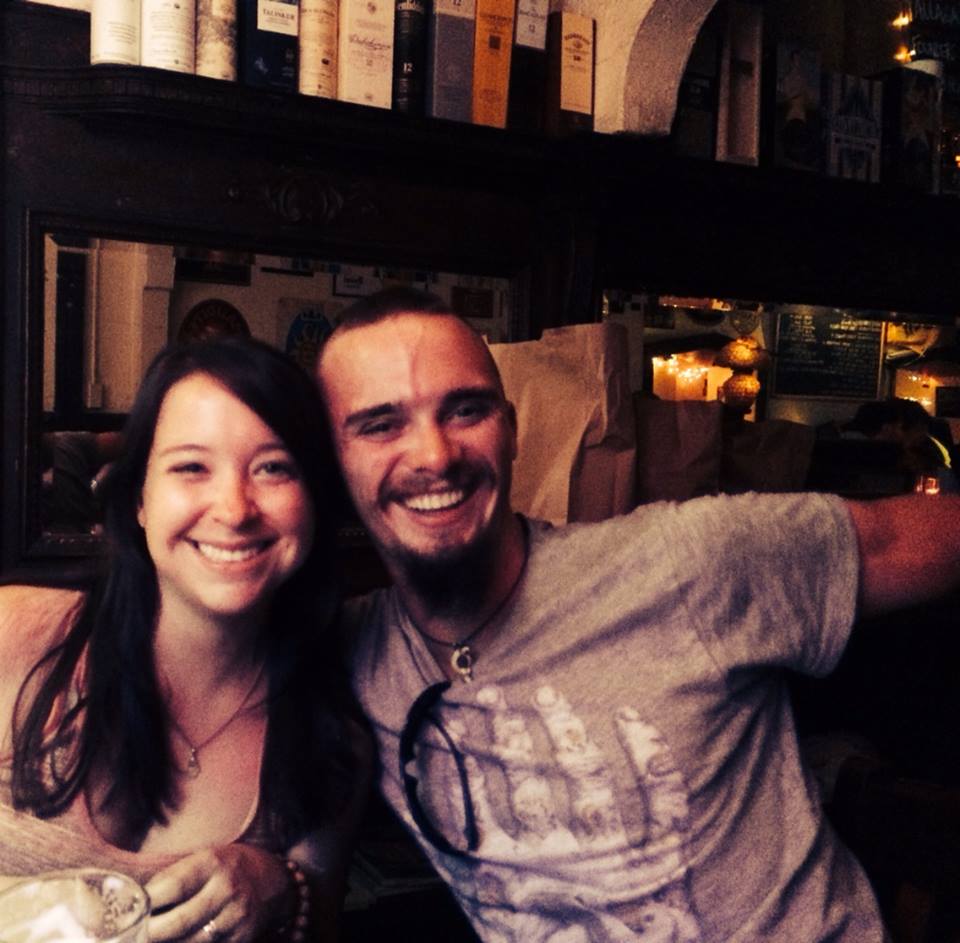 I met Adam at a hostel in Philadelphia. He was a Dublin native traveling around the United States on an orange Honda Shadow motorcycle. He asked if he could rest his beer on my table while he smoked a cigarette. Four 10% Felony IPAs later, we found ourselves eating barbecue seitan on a fire escape.

Between slurred appreciation for the faux-barbecue, he told me of being a nurse back home — one of his patients being Simon Fitzmaurice. Simon had been diagnosed with motor neuron disease, which had left his body paralyzed. As a filmmaker and writer, Simon continued his work, going on to write an entire novel and screenplay on an eye-gaze computer. Post diagnosis, he even got his wife pregnant with twins.

“That’s enough to make anyone question their own achievements,” I laughed.

“Oh yeah,” Adam responded. “But what makes me question my own life isn’t from what Simon has achieved — it’s from the amount of life he has in his mind. He’s got more life to him than anyone else in this world. That’s what makes him great.”