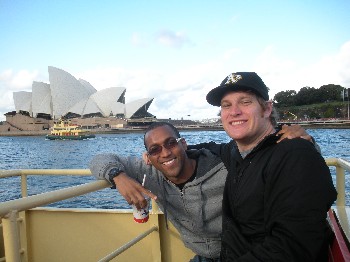 Hot girls from North Carolina we hung out with in Melbourne: 1

Non-annoying hot girls from North Carolina we hung out with in Melbourne: 0

Number of places we ate at that used the same wordplay in their titles that I had in demos for “This Gigantic Robot Kills”: 2

Number of monks who got drunk with us at a monastery near Melbourne: 5

Age of the oldest monk there: 92

Number of times I went to 7-Eleven for coffee: 12

How many days it took for me to learn the difference between “flat white” and “long black” coffee: 3

Number of comic book stores we went to in Melbourne that had awesome old-school Ninja Turtle toys: 2

Number of comic book stores that had the 25th anniversary re-releases: 0

How many koalas I petted at the Featherdale Wildlife Park in NSW: 3

The number of emus that tore up the cone with food for the wallabies when I was trying to feed them: 2 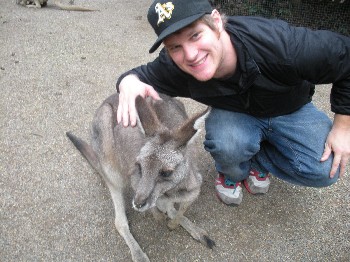 On a scale of 1 to 10, the determination with which DJ declared, “They can’t mess with me,” when we’d had enough of the emu terror: 7

My percentage of being Australian: 50

Distant second cousins and aunts and uncles I had dinner with in Melbourne on our night off: 11

Number of pages I got done for my graphic novel while traveling: 2

Number of pages I’ve gotten done since being back in California: .25

Number of times we listened to the new Eminem record: .5

Number of times we listened to Mewithoutyou: 7

Number of giant monuments to Australian “legend” Craig Giles in the small town of Finley: 1

Number of people in the touring party in Finley who had heard of Craig Giles: 0 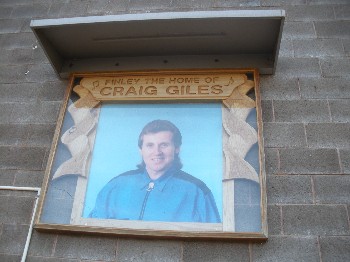 Craig Giles, whoever he is.

The time I finally got to bed on our night off in Melbourne, as I listened to Bile on my iPod and wandered the streets, furious at my ex-girlfriend for something: 5

Number of times per week we ate at Subway: 4

Number of times I eat at Subway per week in the US: 1

How many times I told DJ I wasn’t going to drink at all this tour: 13

Whiskey and Cokes bought with our drink tickets at shows: 13

Number of female DJs at the Spectrum club in Sydney who had fun flirting with us: 3

Number of times I asked people about Alice Springs and was told that it was more expensive to fly there than to Asia: 5

Hours I spent watching YouTube videos about Alice Springs at our hotel when we had WiFi: 2

Number of times I’ve been to Australia: 4

How many people danced and sang with me after I played “Down Under” by Men at Work when I DJed after our Sydney club show: 8

On a scale of 1 to 10, how much this second thing influences my decision to go back soon: 10

Headed down under yourself? Meet Matador’s Australia experts for insider tips, or read about the 15 things you can’t miss while you’re there.

Have a By the Numbers you want us to read? Send to david [at] matadornetwork [dot] com

Ready to submit your trip “by the numbers”? Send to david@matadornetwork.com.

Tagged
Narrative Australia
What did you think of this story?
Meh
Good
Awesome