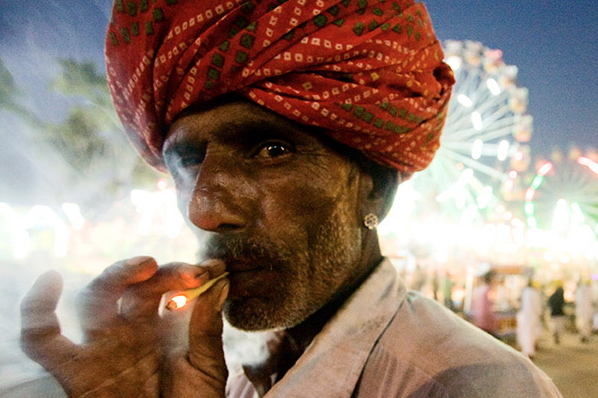 Photo by Radhika Raj, from the photobook, Gurus Gods & Camels: A Photo Journey to Rajasthan.

How saying yes to chaos and privation led to an unprecedented collaboration and an extraordinary photobook.

I STRUGGLE WITH INDIA. While there, I’m disgusted by the poverty, sickened by reality, angry at the absurdity of it all. Inside my head are dueling desires: leaving vs. staying. It helps to laugh, to let yourself go a bit, to not think and instead try to accept it for what it is: India. 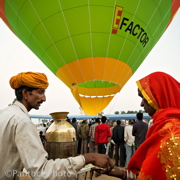 India is often described as extreme. Extreme poverty and disease side by side with extreme wealth and opulence. And most extreme, perhaps, are the feelings inside a traveler’s head while trying to come to terms with it all.

This is what makes India like a drug. For some personalities, it’s addicting. You swear off it when you’re there, but once off it you desire more.

We made our first visit in 2004. One of my closest friends, Jonathan Kingston, was teaching at a photography institute and continually trying to get a group of friends to come visit. Together with Jonathan and Paul Liebhardt, a professor from our own photography school, we decided to cover India’s Thaipusam Festival.

Travel is glamorous only in retrospect. — Paul Theroux

During previous travels, Paul had stumbled onto this festival in a remote southern village. It was not in any guidebook. In other words, it would potentially be our own to experience. We made the journey, spent a month photographing Indian life, and in the end had experienced something sublime.

But when it was all over, I was pretty sure I would never return. India had worn me out.

A few years later, with the same people, we began to hatch a new plan. This time it was the opposite idea. Every savvy traveler has heard of the Pushkar Camel Fair. It’s crowded with travel groups and photo workshops, hardly the experience we’d had on our first trip. But based on photos we’d seen, along with tales of all kinds of mayhem, we were sure India would put on a show like only India can.

Joining our little gang was a group of Jonathan’s former photo students, all Indian, all now working professionals. With such a motivated posse of talent, we thought: “let’s do a book.” 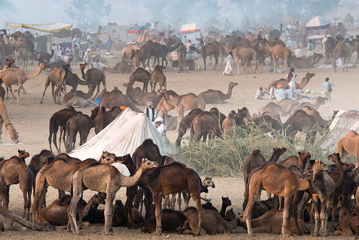 Pushkar is a remote village in the northern Indian state of Rajasthan. Each November, it becomes the venue for a massive gathering of camel traders, nomads, gypsies, Hindu holy men and tourists. And being India, it’s a spectacle.

Not only do western tourists arrive en masse, so too holidaying Indians. There’s entertainment for all: a carnival, contests (best mustache!), balloon rides, food sampling, and so on. For a photographer, the stage is set.

En route to the dry, hot, dusty village of Pushkar, we saw endless caravans of camels, nomadic groups and barefoot holy men. Upon arrival, the usually sleepy town was buzzing with anticipation for its two weeks of glory, two weeks where all the year’s rupees need to be made.

We’d arranged lodging on the edge of town in what we’d hoped would be a quiet complex of tiny individual bungalows. Of some concern, upon checking in, were the workmen rigging loudspeakers on the power poles behind the property.

Yes it is a country, a destination, a place. But much more than these India is a state of mind. — Paul Liebhardt

Outside our gates, the pilgrims settled on any available square inch of street, where they would sell things, beg, pray, sleep and eat for ten days. Through them we would thread our way to the mayhem each dawn.

For a travel photographer in India, dawn is the key period. India coming to life is India at its most beautiful. It’s a time to be alone, observing, ready to make images.

In Pushkar it’s not so difficult to wake for a pre-dawn stroll. The low-quality loudspeakers outside our bungalows had been installed in order to broadcast — at full volume, static and distortion — a nearby Yogi’s endless praying and chanting. We didn’t sleep.

One night Jonathan and I resolved to cut the power line to the poles, but were ultimately thwarted by our own fear of electrocution. So each morning we rose at 4:30, bleary eyed and sleepless, and headed for the streets.

Making good photos in a group is not possible. In a group, you’re distracted, not focused on the task at hand. You’re intimidating to the subjects. So immediately upon departing our little compound, we’d split up, each with a separate idea for what he or she wanted to document.

My usual destination, after first stopping at a tea stall, were the nomads’ camps. On the outskirts of the village are the sand dunes where the camels are kept. Here, I would stroll the cool sands observing women gathering camel dung for fires, men making tea, the gypsy camps coming alive. I would study life as it happened and make my images as I saw them. 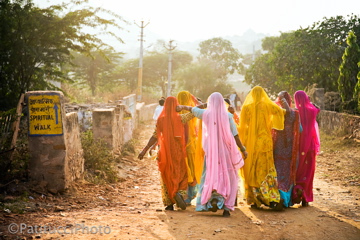 Toward late morning, as the light grew harsh, our gang would come together at a tea stall in the middle of the dunes. Here we would share our morning’s experiences, debriefing each other, discharging overburdened senses.

Back home, the images we make appear on our computer screens, full of color, life, and emotion. Those who’ve been to India know that these images are everywhere. There’s little new to say about India. One way or another, it’s all been said — and has probably all been photographed.

Still, it’s left to each traveler to ask himself the question, “Have I seen and felt these things?”

What’s new in India — what will always be new — is in the unique experience of the individual. And it starts by saying yes — yes to going, yes to the experience.

To see the full photobook online, as designed by Janine Patitucci, click here.

Notes From the Jaipur Literature Festival

The People We Meet Along the Way: Rajasthan

These Are the Love Lessons You Learn in the Desert