I met Daniel two years ago in Montreal, thanks to a mutual friend. I quickly became one of his fangirls and started following his work religiously. Daniel’s got the kind of honesty and storytelling genius that makes me weak in the knees, and so I was thrilled to hear about his Indiegogo campaign to launch his book, The Traveller.

From the campaign page:

“The Traveller” is a full-length travel memoir that recounts the joys and disappointments of pursuing a dream journey. Written with a bit of introspection and a heap of humour, the book is a literary snapshot of twelve distinct global destinations. What emerges is a portrait of an individual trying to be helpful in a variety of volunteer positions and of all the people who subsequently help him along the way. 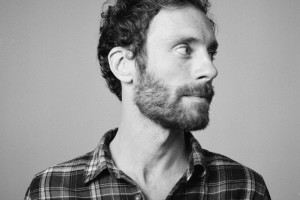 The book takes us through Daniel’s experiences around the globe, from the USA to Morocco to Australia. Amazingly, not only did Daniel pull off a successful campaign, he actually doubled his goal. The whole thing gave me a fresh perspective on the merits of self-publishing.

I reached out to Daniel to ask a few questions about why he chose the self-publishing route, and to what factors he could attribute his success.

Looks like you reached your goal of $5,000 for the book…and then doubled it! Were you expecting such a success story?

Indeed, the campaign ended up over 200% funded! When it comes to crowdfunding, it’s difficult to know what to expect: Some campaigns sink, some campaigns soar. That said, because of the consistent engagement from my social media communities, I figured that $5,000 would be a doable goal. But $10,915? That was AWESOME! It made me jump the couch.

What were your reasons for going the self-publishing route?

To be honest, in the beginning phases I hummed and hawed. I really wanted the validation that comes with “getting published,” but the thought of knocking on the doors of institutional publishing houses really did not appeal. Ultimately, taking an independent publishing route aligned perfectly with the independent nature of my journey — I booked my tickets, found all my host organizations, went into personal debt to make my dream of travelling to twelve countries over twelve months a reality. Plus, with independent publishing, I maintain ownership over the product I’ve created.

For those interested, I’ve written a more comprehensive blog post on the topic: Why I’ve Chosen Self-Publishing, Or As I Prefer, “Team-Publishing”

You mention in that post that you’ve worked in advertising and understand the importance of self-branding. Do you feel like self-publishing is a good route for writers who have zero experience with marketing, or is it more worthwhile to seek a publisher?

Marketing experience is helpful. But the more important skill set to have is that of project management. I playfully refer to my role as the “circus leader.” On any given day I’m communicating and making decisions with an editor, cover designer, typesetter, proofreader, and print company. As a writer, if you’re unaccustomed to or daunted by being a hub of communication, then it’s definitely worthwhile to seek a publisher. The advantageous part of traditional publishing is that it removes many of the administrative tasks and enables the writer to focus on simply writing. For some folks, that’s really important. That said, most publishing houses aren’t going to offer a ton of marketing for first-time authors.

So marketing is something to consider regardless of whether you opt for a traditional or independent route. Fortunately, like proofreading and typesetting, it’s something that can be contracted out. So don’t be scared.

What sort of research did you do beforehand?

In terms of crowdfunding, Indiegogo provides a ton of support — tutorial videos, articles about strategy, and a very responsive customer service team. This was all helpful. I consumed whatever I could find.

The pitch video was probably the singular most important part of designing the campaign. I knew it had to be entertaining and feature footage from my year-long adventure. But it also needed to communicate clearly the essence of what I was requesting from funders. So I watched a ton of other campaign videos until I knew exactly what I wanted mine to look like. 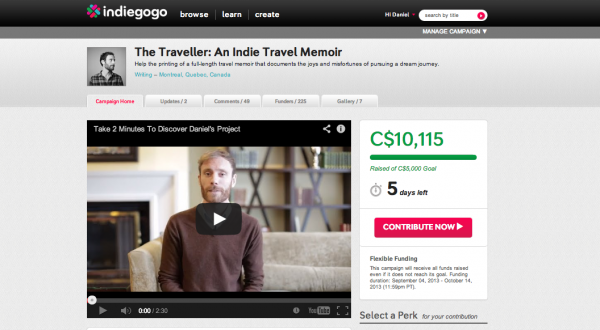 How did you reach out to others to spread the word? What was the response like?

Social media was the most important tool. Over the past few years I’ve worked to develop an online community, primarily as I documented my globetrotting on my blog: The Conversationalist. The success of the Indiegogo campaign is entirely thanks to this community — I recognized 90% of the names of the people who funded me. (The next challenge, of course, will be to reach people who don’t know me.)

A crowdfunding campaign involves risk. Before I launched, I asked the inevitable question: What if I fail? But the response, in terms of both financial support and social media sharing, was very encouraging. I jumped and was held by a supportive community. You could say I “crowd(source)-surfed!”

Did you encounter any problems along the way?

There was a glitch with the “tweet tally” on my campaign page. I immediately informed the Indiegogo technical team, and they eventually resolved it. But for most of the campaign, the number of tweets stayed at zero. This was a bit disappointing — I mean, how embarrassing, right? Ultimately it was the biggest First World problem in the history of First World problems. I got over it quickly.

What do you think is the biggest reason for your success?

Hands down it was because of my aforementioned online community. Over the past few years, I’ve shared my personality and my travels through written articles, photos, and videos. They know me and the adventures I’ve taken. They wanted to be a part of the project and own the rights to its success.

It was also helpful that I was not asking for charity. I tried to frame the campaign in a basic commercial context: You give me money, I give you a product (a book). As a culture we’re programmed for this model of engagement, so I used that to my advantage. The bigger goal was (and will be) convincing people who I don’t know that my book is legitimate — even helpful for those dreaming of big adventures!

What did you learn from this whole experience? Any tips for other authors who are looking to self-publish?

I learned that I could sell a few books. And as an indie writer, that was vital.

For authors who are thinking about self-publishing, my biggest tip is to not do it alone — make it a “team-publishing” endeavor. Firstly, build a community. And then connect with experts who can make your story into a beautifully crafted and professional product.

If you’re stuck, you can find me at danielbaylis.ca — I’m happy to offer a free three-email coaching session to Matador readers!

So, goal achieved. What’s next?

The book gets printed in November, and once I have the printed copies, I need to do what’s called “fulfillment” — ensuring that all 250 of my funders get what they ordered! Once that’s taken care of, I’d like to sleep for a couple of days.

In 2014, I’ll head full-tilt into promotional mode for The Traveller. I’ll also be taking a couple social media and writing contracts. And I’ll begin researching my next major project: writing the life story of someone very close to me.

Oh yes, and I hope to do some travelling — I mean, obviously. That’s why we’re all here on Matador, right?