Note: this piece is a kind of ‘follow-up’ to last week’s Notes on Marketing Language and Youth.

THE BIGGEST PROBLEM I HAVE with most people’s writing (including my own) is when it strings you along on one emotional level. When it’s emotionally flat-lining.

When this happens, the writer tends to come off as if he’s been sheltered his whole life, as if nothing unpleasant or difficult has ever happened. There’s a kind of mild ‘wonderment’ or ‘excitement’ over whatever experience is being recounted, and that’s as deep as it goes. 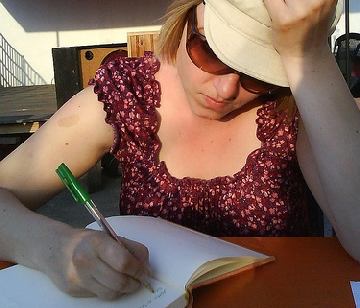 I’m talking more about narratives here, but this same kind of emptiness also kills a lot of informational-style pieces about travel or social media or whatever subject.

Authors of these kinds of pieces would have you believe that all you need–in a metaphorical sense–is to pay for a ticket, pay for insurance, and everything will be taken care of.

People who know who they are

What saves me is good writing. Stuff that’s real, that hits all different emotional levels. Sad, happy, funny, whatever. David Sedaris comes to mind immediately, as does Sherman Alexie.

[As kind of a side-note: It seems like a disproportionate number of these kinds of ‘alive’ writers have always been gay, from Whitman on up the line. I have a weird theory about this. Basically my theory goes: gays / lesbians have traditionally been discriminated against in most if not all societies. Certainly ours. So, in my mind anyway, gay people are probably forced to do a lot of extra thinking about and ‘coming to terms’ with who they are.]

Self Awareness as a ‘technique’ in fiction

. . .to me, self-aware writing is smart writing. I never forget I’m reading a book. I’m never reading a book and transported into Narnia and forgot where I was. I always know it’s words on a page. So I’m not going to try to pretend that the person who reads my book isn’t going to be as smart as I am or is basically going to give themselves up to whatever concept I might be proposing.

A different, but perhaps slightly related form of self-awareness happens in fiction when the narrator basically breaks in and reminds you that this is all just a book. It goes against the tradition of creating a kind of seamless fictional realm where the reader ‘suspends disbelief’.

You can apply a similar kind of self-awareness to nonfiction, which is one way to check yourself from ‘glossing over’ a subject or narrating a story all on one emotional level.

There are many ways to do this. Here are a few obvious ones:

On one hand I feel like I’ve conflated the idea of ‘knowing who you are’ with ‘utilizing self-awareness as a kind of contrivance’. The main idea is basically that you think about who you are–and trust in that–and not be afraid to break in and let all different parts of yourself flow into the writing. There’s already enough boring crap out there. Say what you really need to say.