THERE WERE SIXTEEN OF us in all: three crammed in the front row, four in the second, and about nine in the back. A few mother-daughter pairs, a single businessman, a government economist, a woman who held a prayer session every time we started the car, an old man who never uttered a word, and a handfull of small children. I still don’t exactly know who they belonged to.

Our departure point was Arusha, the busy wildlife safari hub of Tanzania, but a luxurious five-star safari to the Serengeti was probably the farthest possible experience from what we were in for. Certainly one could describe the impending adventure as a “safari”, but only in the true Swahili sense of the word: “a very long journey.” 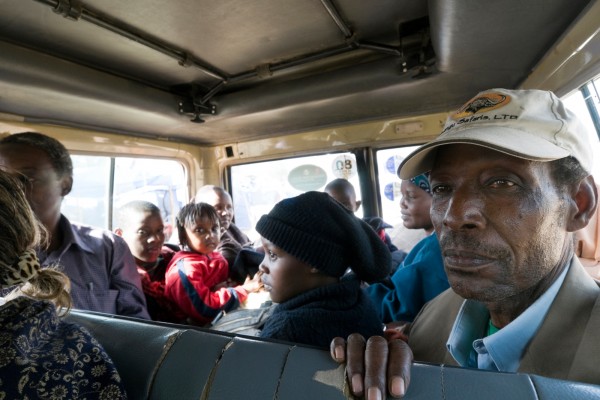 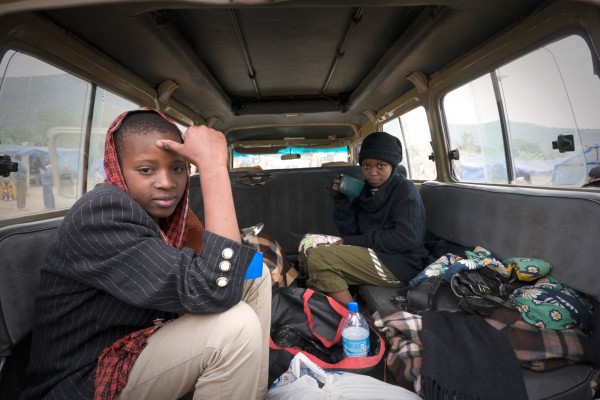 Our goal was to reach the tiny village of Samunge, in Loliondo, which lies deep in northern Tanzania and skirts the boarder with Kenya. A rough five-hour drive from even the most faintly paved roads, it’s a place far beyond the even the most offbeat backpacking trails, where brilliantly adorned Maasai warriors and their children chase down passing vehicles, hawking enormous bricks of salt they recently hauled out of Lake Natron.

In the distance hangs the highly active volcano Ol Doinyo L’engai, (literally “Mountain of God” in the Maasai language), its destructive power visible in the long, deep scars burned into the barren landscapes. Cell phones fail to find even a single bar of reception. 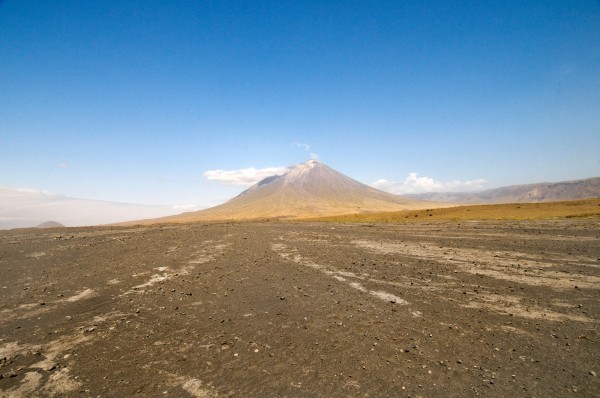 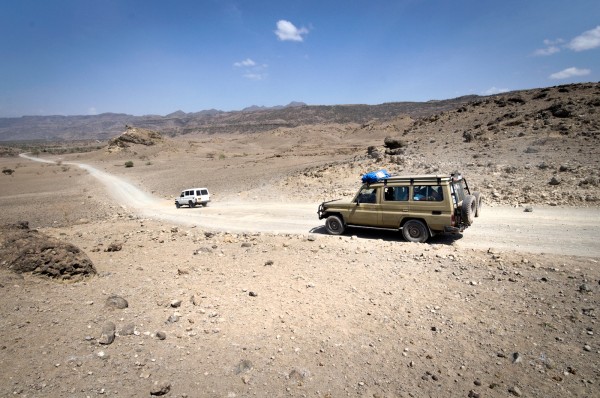 Before this year, Loliondo was nothing more than another unremarkable dot on some remarkably detailed map. Yet since February, Loliondo has captivated Tanzania’s attention and led to a massive migration of people flocking by bus, car, motorcycle, land cruiser and for the fortunate few, by helicopter, to this tiny rural village. At one point in March, it was reported that over 20,000 people per day were arriving at Loliondo. They’re all in search of one man: retired Evangelical Lutheran pastor and “miracle healer” Rev. Ambilikile Mwasupile.

Known to most as simply “Babu,” he’s been doling out thousands of doses from his “Kikombe cha Dawa” (cup of medicine), a “secret” potion apparently derived from the Carissa edulis plant (known locally by many names, including the Mtandamboo plant and Mugariga tree) that’s said to cure those who imbibe it of everything from common headaches to diabetes, asthma, epilepsy, cancer and HIV/AIDS. 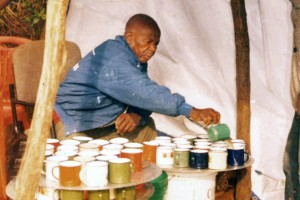 Yet one must not be deceived by this modern medical breakthrough. It’s not the plant itself which contains the cure. It’s the distilled drink, according to Babu, which bears the “power of Jesus,” brewed solely by Rev. Mwasupile himself, drunk only within the gates of his compound, and by those who truly believe, which holds the cure. It’s kind of like an energy drink from god, which is to be administered only under specific FDA guidelines.

In May, after probably months of internal debate, the government of Tanzania finally took a loose stance, declaring that the concoction was “not toxic and safe for use”, a vague statement at best neither denying nor endorsing its “healing” capabilities. The fact that dozens of ministers, the Prime Minister, and even the President of Tanzania, Jakaya Kikwete, have visited Babu of Loliondo and sipped from the cup only serves to subtly reinforce its power to the public.

As chronically sick people from across the country and around the world flocked to Loliondo in hope of a miracle cure for their ailments, they often were reported to have abandoned previous treatments, doctors’ instructions, and their HIV/AIDS medications. A close friend who works at a private hospital in Dar es Salaam has seen dozens of individuals coming back from Loliondo to be re-tested for their illnesses. She has seen no change in results.

But I haven’t come across too many miracle healers in my lifetime, so I simply couldn’t resist the urge to go. 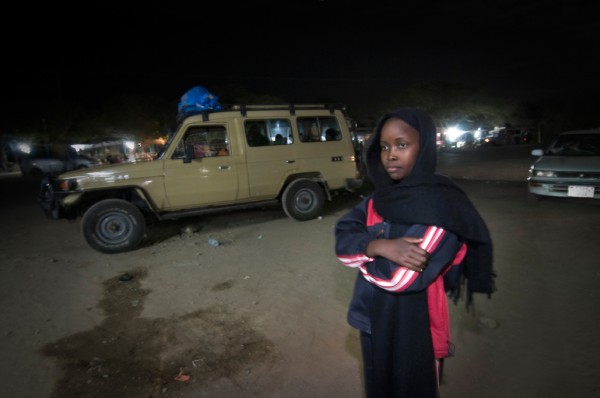 After a quick stop at a gas station to pick up some essentials–Red Bull, biscuits, water, and some Konyagi (Tanzanian liquor) in case of dire emergency, we headed north. We passed around and shared the food among the 16 of us in the cramped Land Cruiser, each excited by the uncertainty of what lay ahead. Two and half hours later, our Land Cruiser took a turn off the smooth pavement and began hobbling down an even darker dirt road towards Loliondo.

As we cleared the immediate brush and trees off the main highway, the landscape suddenly transformed, teleporting us into what seemed like a completely separate world. We quickly descended down a ridge into complete, flat blackness; the moon was nearly full, but not a single dot of light could be seen on the horizon. All that surrounded us was an eerie black ocean of terrain surrounded by sharp mountains. Our high beams penetrated the cloud of dust kicked up by a constant rhythm of gas, break, gas, break, meticulously navigating around ravines and boulders. 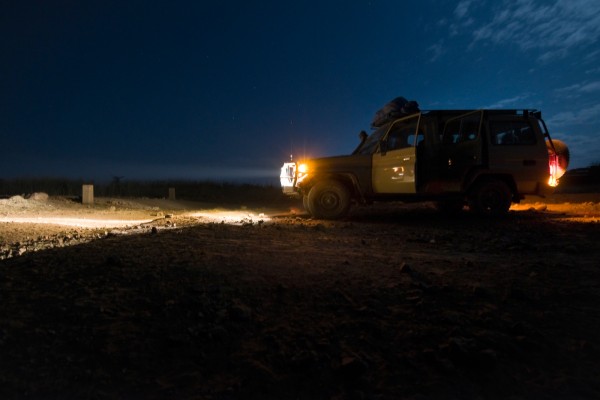 We stopped only to go to the bathroom, a herd of Zebras illuminated in our path. Sleep was hopeless, resulting in nothing but painful whiplash the moment the neck fell slack, so our minds drifted into the sea of darkness outside.

At 3:15 AM, after multiple random checkpoints, we arrived at the impromptu gate to Loliondo. Like a teenager waiting to enter a punk rock music festival, a sense of giddiness and electrified curiosity came over me. I’d read the reports in the local papers from weeks earlier. Thousands of sick people waiting for Babu. No water, no sanitation, no accommodations. It seemed like a humanitarian crisis waiting to happen. Bodies of those who couldn’t make it littered the path, they said. 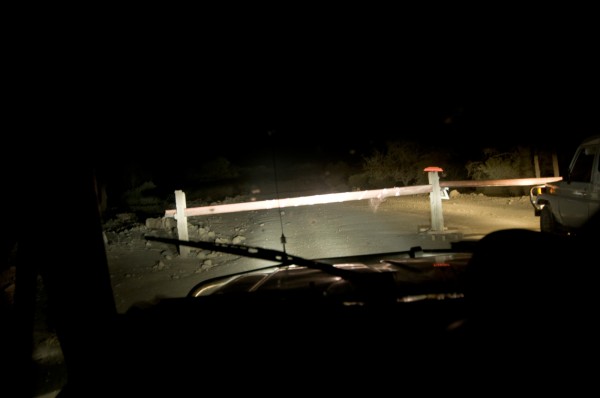 The idea of a medicine man is not uncommon in this part of Africa. These traditional healers can be found in nearly every village, and in many cases they are the first medical line of defense in rural areas. Most people will see their local healer with an ailment long before they make a one, two, or even five hour trek to a medical professional. ”Miracle healers” like Babu, however, are a little less frequently available.

It only took a small bribe at the gate, the result of a passport mistakenly left at a guesthouse in Arusha (who knew you needed a passport when you weren’t crossing boarders?), and we were in. Our Land Cruiser crept up the hill, and we watched a line of cars snaking down the dusty path. Pop-up tents everywhere. An entire town, it seemed, of blue tarps and sticks. Not until much later, walking up the path towards Babu’s compound, did we see any permanent structures. 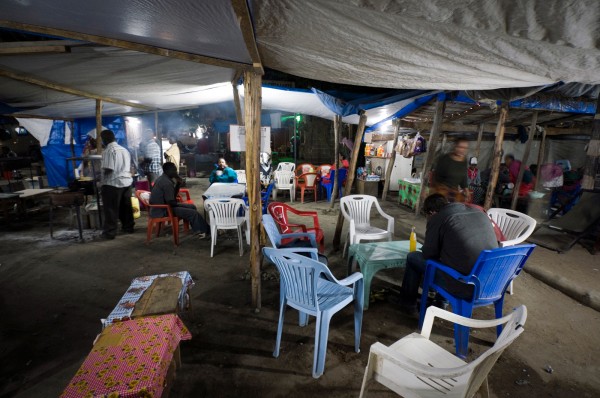 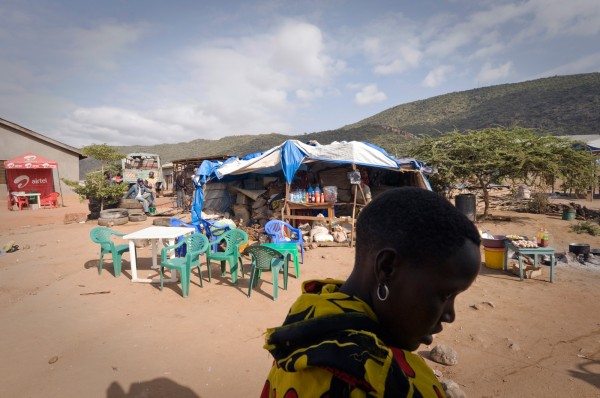 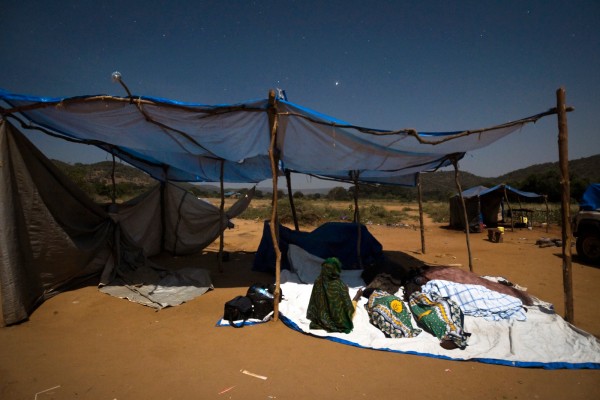 While most of our fellow passengers passed out on an open a blue tarp immediately after our arrival, our trio–a journalist, a photographer, and Max the Translator–set off to explore the area in the wee hours before dawn, talking to locals and stepping around mangy street dogs. It cost 500 shillings to go to the bathroom (a hole in the ground with a tarp around it). If you chose the seemingly more sanitary option–a bush–a Maasai tribesman would kindly round you up and point you the other way. To pay, of course.

We met Alfons, a village council member with good English who now runs one of the most high-tech tents in the town with a generator, multiple phone chargers, and a TV that blares Bongo-flava DVDs from 6 AM onward.

Rehema, a woman at least a few sheets to the wind from her double-shot packets of Konyagi, came all the way from Dar es Salaam to see Babu because of a headache she had for two weeks. Her mother-in-law came with her son from Germany, and her grandma came with heart trouble “and a massive obesity problem,” said Rehema. 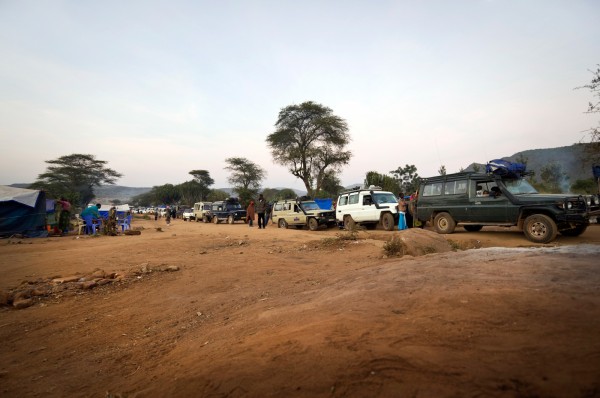 As dawn approached, small fires began stirring in the lanes between the cars and tents, filling the air with aromas of milk tea and greasy chapati bread. Wake-up time was the moment Alfons cranked on the television, and sleep was again futile in the midst of his blaring music videos.

The transient city awoke slowly, and people began trickling out of buses, Land Cruisers, tents and bushes and into the small food stalls. As the light dawned on Loliondo, the situation was much better than I had imagined. Trash littered the dirt road, haphazardly-constructed tents precariously balanced on one another, but there were no dead bodies, no open defecation, and enough food and water for an entire army. The line of cars, trucks, and buses stretched perhaps only 300-400 deep, carrying probably around 3,500 people. 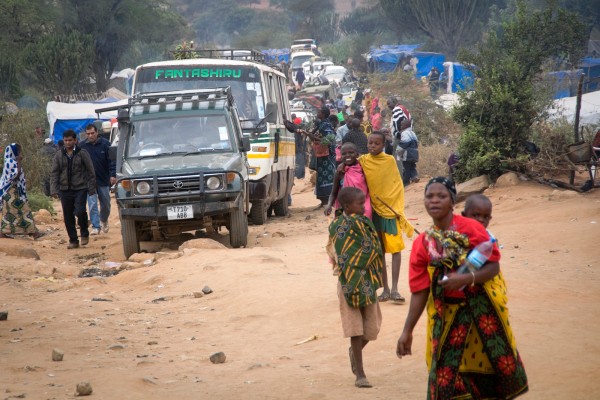 At the entrance to the Babu in Loliondo. All photos by the author.

At 8 AM, Babu himself was scheduled to speak to the crowd in front of his compound. We anxiously made our way up the hill as he began preaching the powers of his medicine and the restrictions of it’s use–most importantly not to take it off the compound, because it won’t work, and if you’re a witch doctor, it won’t do anything for you. It might even kill you, actually, if you are a witch doctor.

Halfway through his quite uncompelling speech, I found myself pulled out of the crowd and hassled by yet another immigration offer. This time, I got away without a bribe, after assuring him I was simply, cough, a “Christian from America seeking to drink from Babu’s cup of miracles.” I was, absolutely, not a journalist.

So there we were, ready for our holy grail, our cup of miracles, our magic cure, when suddenly we were all instructed back to our cars and told that we would simply drive through the compound and receive our drink by Babu’s servants. Not even the McDonalds’ playbook could hold something so brilliant and divine. A drive-thru cure of all your ailments served up a variety of colored plastic cups. 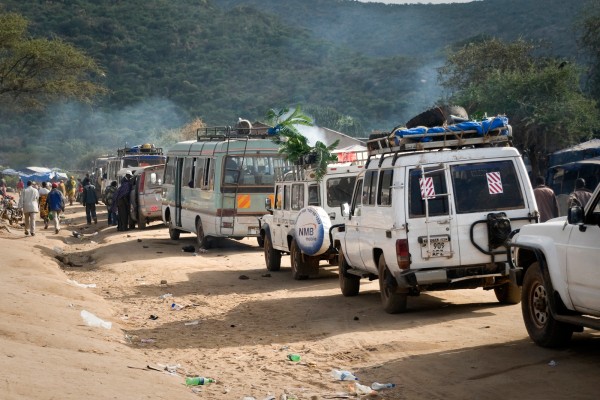 In less than an hour, our Land Cruiser rolled into the compound. The plastic cups with an opaque, greenish liquid were thrust into our windows, and we were ordered to drink. I waited patiently as we passed the cups to the families in the back seat until I received mine. Without hesitation, I downed the sucker, which left an earthy, almost minty aftertaste in my mouth. And then it was all over.

We returned the cups, and drove off, back another seven grueling hours to Arusha. I felt kind of used.

I felt a little lightheaded. But my guess is that this was from the lack of sleep. More than anything, though, I just couldn’t get my head around the whole endeavor; I understand the power of faith, I do have a belief in traditional medicine, and can see why, when faced with little alternatives in a failed health system that people seek this miracle cure from all over East Africa. But seriously, a drive-thru? 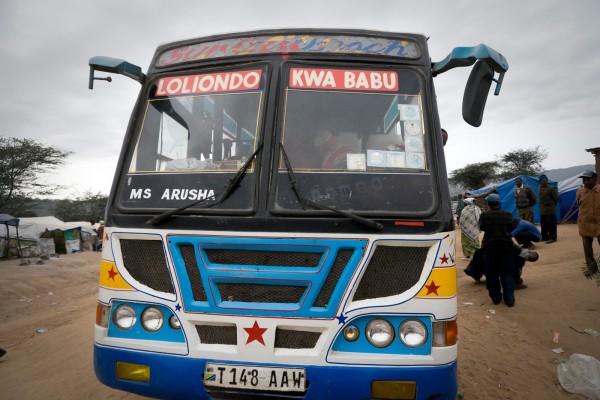 Whatever. It was worth the trip. And if the government of Tanzania declared it “non-toxic and safe for use,” well, what did I have to lose? Aside from, perhaps, my already dwindling faith in certain governments.

Tagged
Narrative Tanzania
What did you think of this story?
Meh
Good
Awesome

On Witnessing a Maasai Circumcision Ceremony