Scantily clad Penthouse Magazine “pets” deliver pina coladas and casually spin roulette wheels. Even with punters being surrounded ten-deep by soft-porn models, happy endings at the Penthouse Adriatic Club casino always come down to the luck of the draw. Housed in the Haludovo Palace Hotel on the Croatian island of Krk, the hotel / casino / hotbed of 1970s awesomeness was the brainchild of Bob Guccione — owner of Penthouse Magazine worldwide.

Opening its lavish doors during the thick years of Josip Broz Tito’s Yugoslavia, at a cost of $45 million — in 1972, dollars were worth a lot more than they are these days — the Haludovo Hotel had a fittingly rock star ending. One year after opening, the opulent casino complex by the seaside was declared bankrupt. Bikinis were packed into suitcases, chips were cashed in, and the Pets went home. 1970s Yugoslavia? Hell yes.

After more than a year continuously on the road, it’s fair to say I spend a lot of time in hotels. However, this is not 1972 Yugoslavia, where men wore mustaches, Mexican-inspired salsa music was rocketing up the charts, and brand new brutalist concrete apartment blocks were gleaming, not decaying. This is 2013 Croatia, and as you can see from the photos, the Haludovo Palace Hotel may be fit for photographers with a bent for urban exploration — but it’s not exactly the glamorous destination it was in Bob’s days. 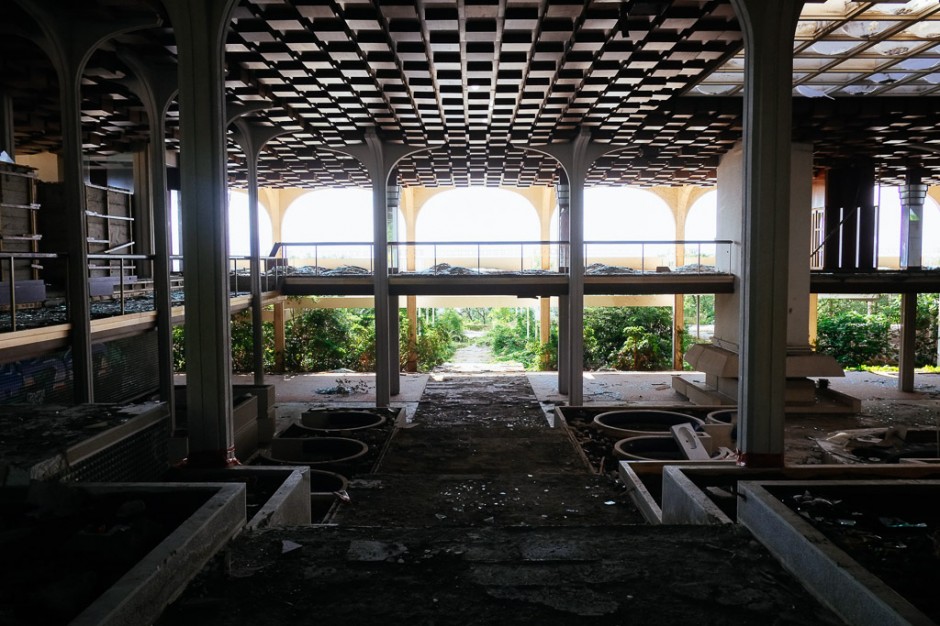 Haludovo Palace Hotel. Also known as the Adriatic Club Casino. On the island of Krk, Croatia. 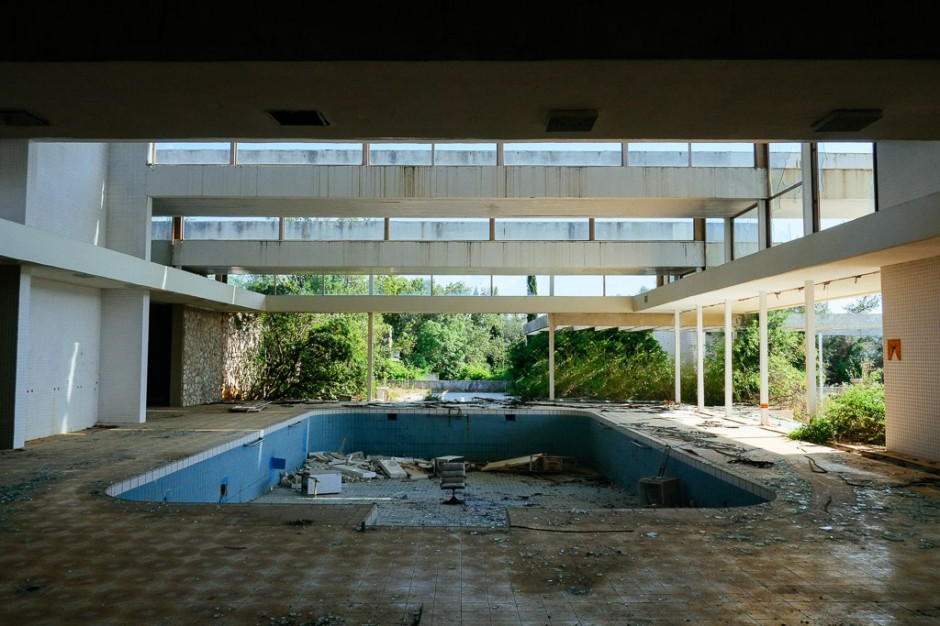 Indoor swimming pool at the Haludovo Hotel. Come on in, the water is fine. 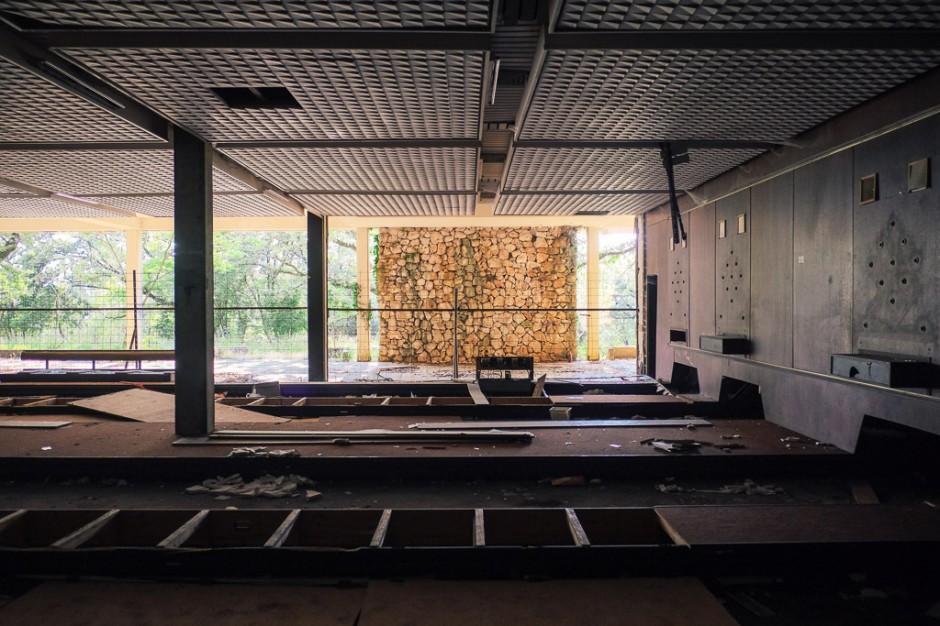 Not up for a swim? Perhaps a game of Ten Pen Bowling then. Penthouse Club Adriatic, Krk, Croatia. 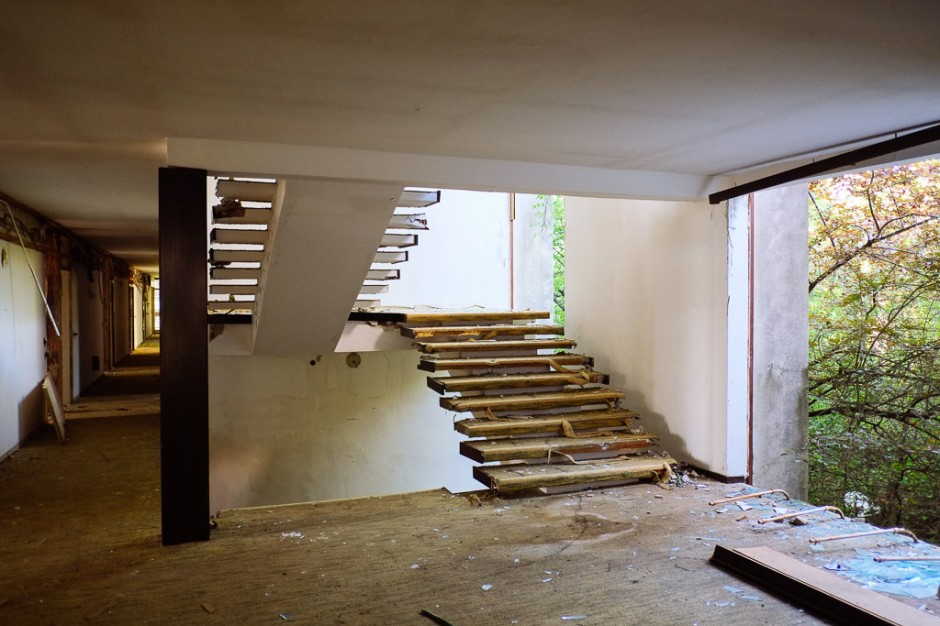 One of the wings where the suites are located in the Haludovo Palace Hotel, Croatia. 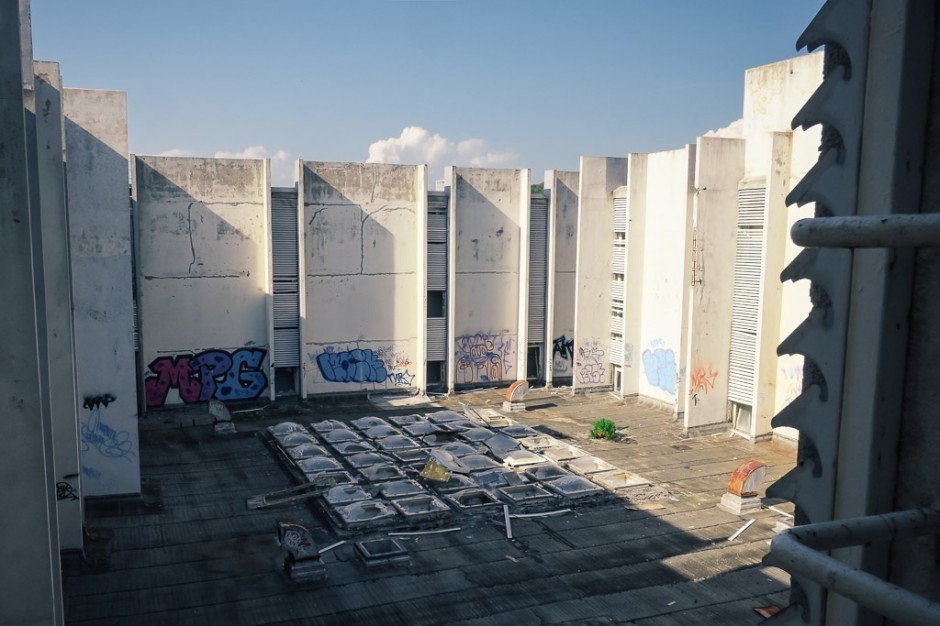 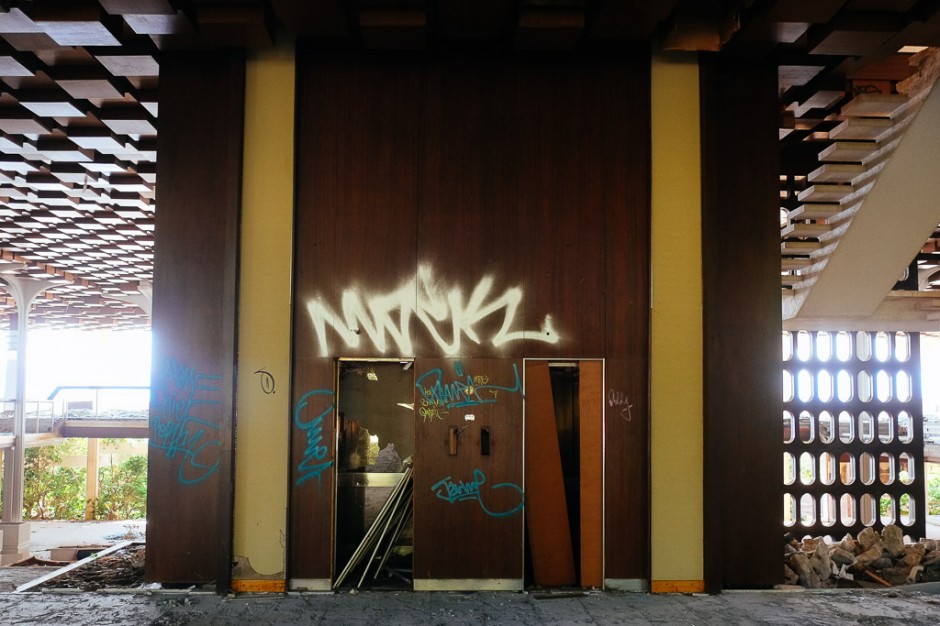 Elevators are out of order at the Penthouse Adriatic Club. Actually, pretty much everything is out of order these days. 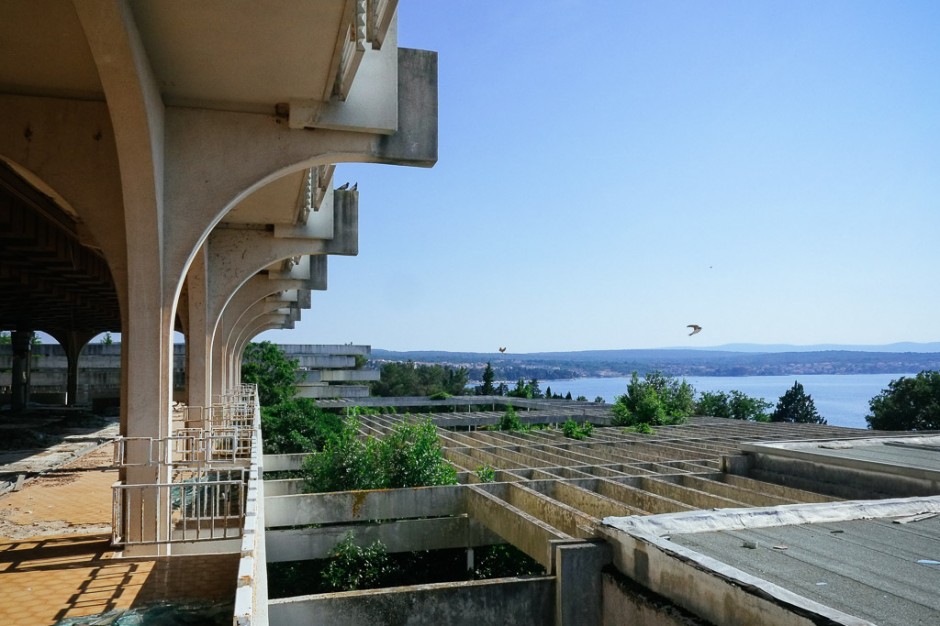 These days, the Haludovo sits as stark evidence that “Communist” Yugoslavia, ruled over by “Dictator” Tito, is perhaps not exactly what you thought it was. Even though the term “Iron Curtain” was coined in these parts, it’s very clear that allowing an American businessman to set up a hotel / casino so that local and foreign gamblers could throw money around whilst being waited on by Penthouse Pets is an indicator that perhaps Yugoslavia was not as communist as you may have been led to believe. And that Tito was not exactly the dictator with the heaviest fists.

Then, as now, misconceptions and misunderstandings about the former Yugoslavia filled the minds of Western citizens. Perhaps more people should have paid attention to Penthouse Magazine, the bastion and final word on all things political (I only read it for the articles), when the June 1972 edition described Haludovo as “richly located on the idyllic island of Krk, a few miles south of Trieste and directly opposite Venice, this mile-long Xanadu of glittering buildings will become for international cognoscenti a premier playground for summer and winter seasons alike.”

Every day, lobster, caviar, and champagne was consumed like it was going out of style. Because it was. There was a problem. Despite the architecture being “a gracefully colonnaded construction within whose elegant interior is the Great Lounge, bedecked with hanging gardens, pools and fountains,” and that the casino was promised to compete “with the finest casinos in Las Vegas and other principal gambling centers,” the casino component, known as the “Anglo-American Penthouse Casino,” was unfortunately restricted to only foreign gamblers. And foreigners didn’t exactly flock to Yugoslavian casinos in 1972. With such a huge expense in construction and ongoing costs, it was soon apparent that the hotel was bleeding money. This is one casino where the house didn’t always win.

But that wasn’t the end of the Haludovo. For the next 20 years, the hotel resort was operated as a worker-run enterprise, with the Penthouse kingpin breaking all ties. Right up until 1990, the hotel was profitable. And then that most Yugoslavian of beasts — war — meant that the tourists well and truly dried up. During the years of war, parts of the complex were used as a refugee camp, and the downfall of the Haludovo continued to gain momentum. Ironically, it was the brutal process of “communist” Yugoslavia transforming into capitalist Croatia that bought about the end of Bob’s palace. These days, the hotel has changed owners a few times, with the current owners seemingly not fazed that an icon of mid-century architectural grandeur continues to devolve into abandoned decay. 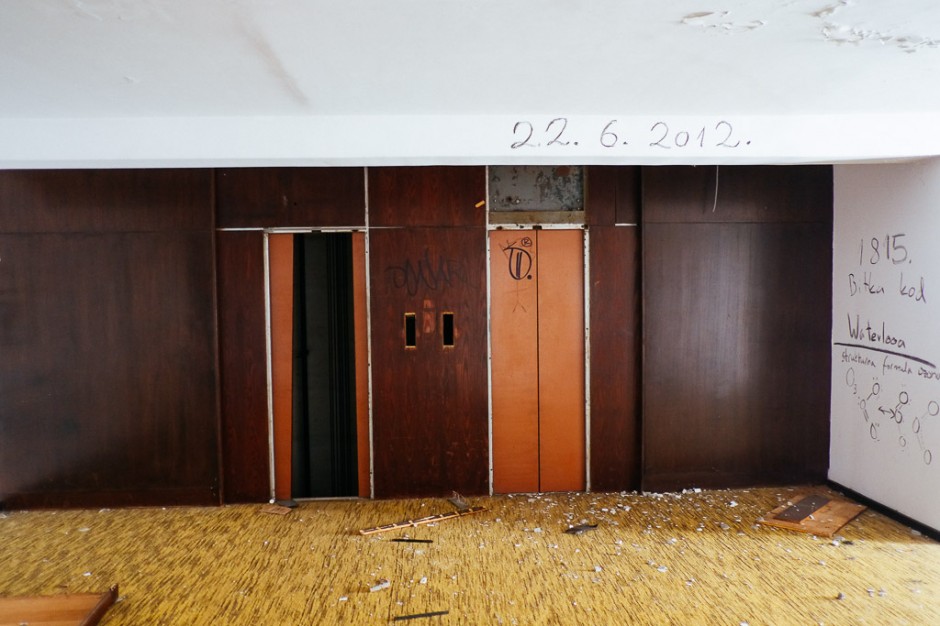 Yep. Out of order. 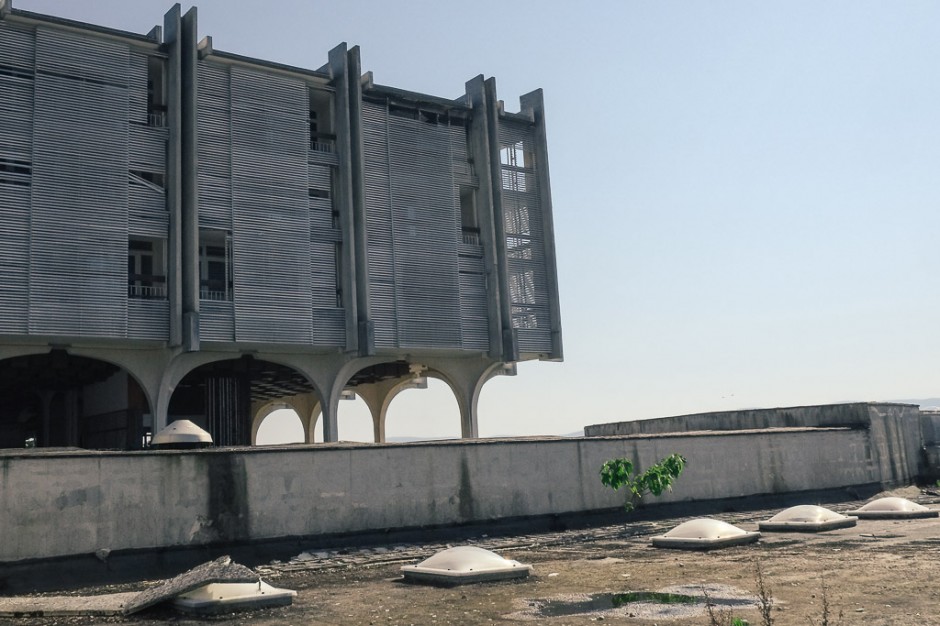 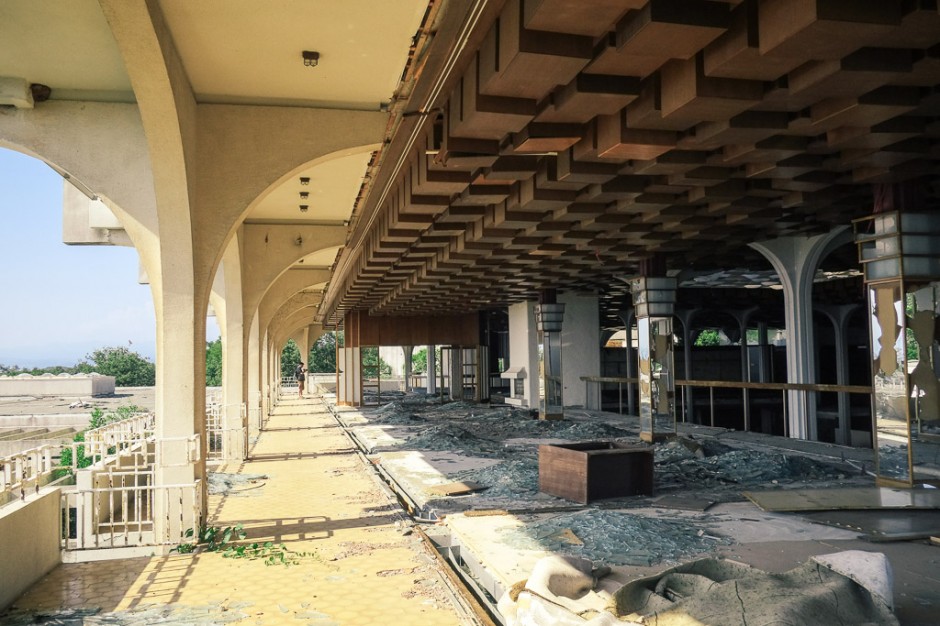 Amazing ceiling details at the Haludovo. In the distance is my Croatian buddy Nikola, a fellow photographer and part-time trespasser. 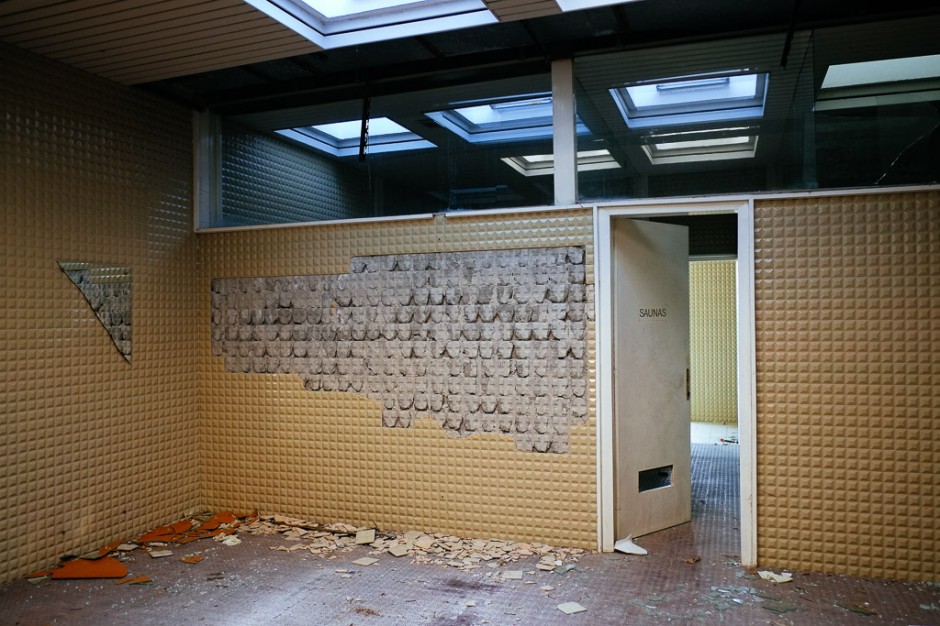 Inside this sauna, I don’t really want to know. 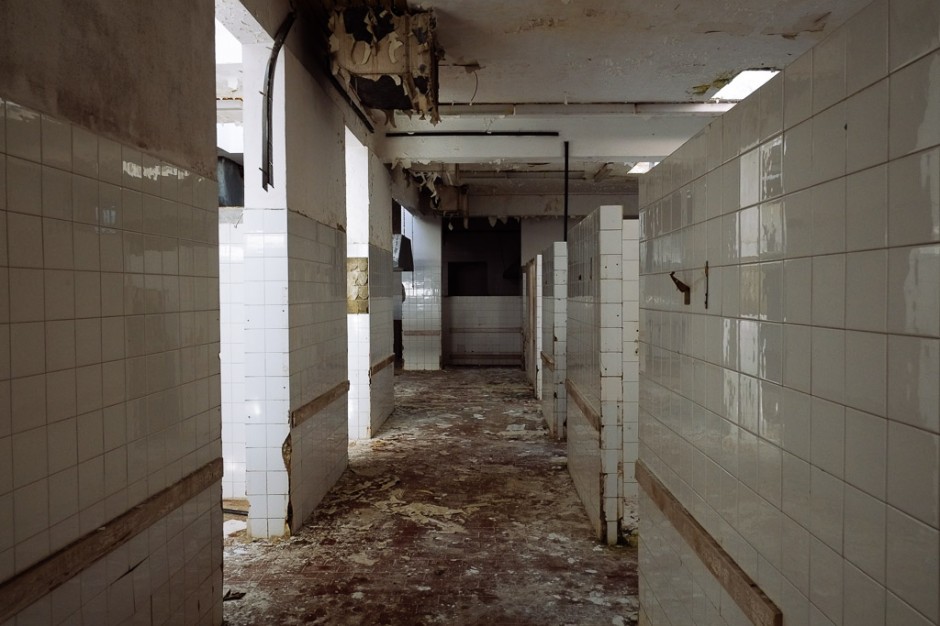 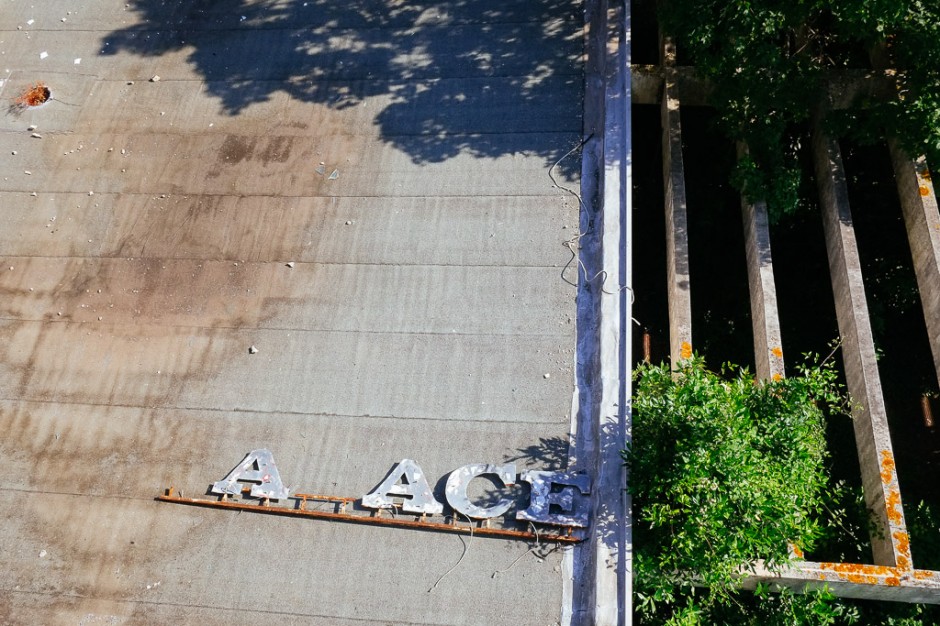 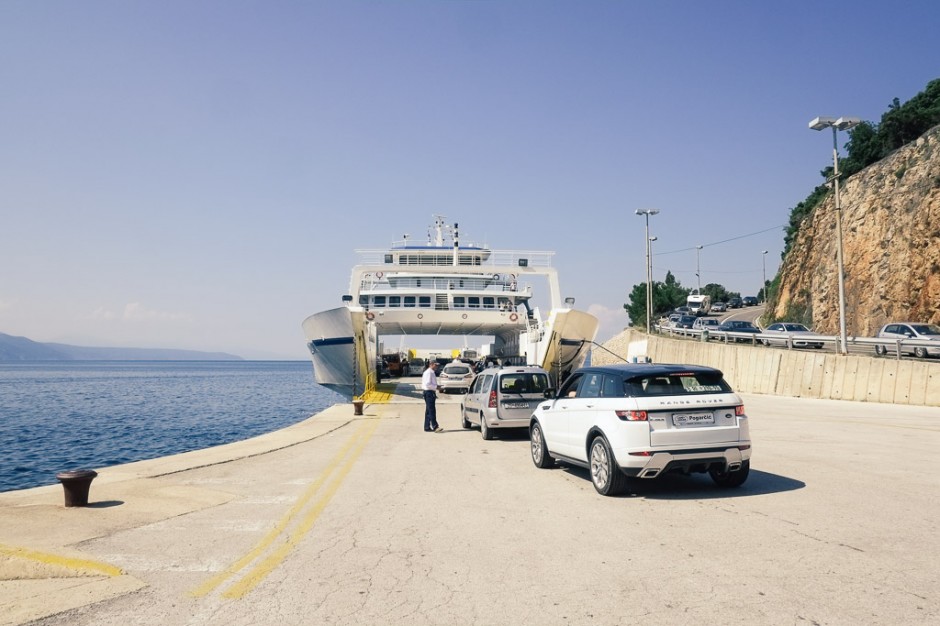 Island hopping onto the island of Krk from another one of Croatia’s stunning islands. Getting off is easy – a bridge connects Krk with the mainland.

Still, you’ve got to hand it to Bob Guccione (RIP). Although a natural assumption may be that the American uber-capitalist was interested in nothing but money and perfectly shaped women, keep in mind this quote:

There are still false ideas about Yugoslavia as a country behind the “Iron Curtain,” as a country in which a businessman or someone looking for entertainment would find nothing. The Penthouse, too, faces many prejudices, doubts and a lack of understanding. We are called non-serious exhibitionists and pornographers, incapable of and disinterested in any serious business. I think that all this is, above all, a result of ignorance. Even the cold war itself is a consequence of ignorance. In order to defeat ignorance it is necessary to develop communications between people. In this connection tourism is certainly one of the most powerful forms of communication. Through the realization of this project, the Penthouse Adriatic on Krk, we have the opportunity to start a big process of re-education: we have become partners in removing doubts and ignorance.

So, I wouldn’t go as far as calling Mr. Guccione a humanitarian, but he did seem to get a kick from doing his part to educate the rest of the world about what Yugoslavia was really like.

Bob knew, but I don’t. Without having lived through 1972 Yugoslavia, I don’t feel 100% justified in being 100% certain of what it was like. But having visited the rapidly decaying ruins of the modernist masterpiece that is the Haludovo Palace Hotel, I can be absolutely certain of one thing about Yugoslavia.

This post was originally published at Yomadic and is reprinted here with permission.