WHEN I ENTER THE oldest church of the oldest Chinatown in the world, I notice I’ve walked into the middle of a Chinese-Filipino wedding. The groom is grinning in his white satin jacket and bright red shirt. The bride wears, of course, pure white.

The couple is in good matrimonial company in Binondo Church. Andres Bonifacio married here in 1895; he was a poet, and the Supremo of the Katipunan, the nineteenth-century Philippine revolutionary force that fought the colonizing Spaniards. The Spaniards who, in 1594, allowed the Chinese community to settle in this area of Manila, then, in 1596, built this church.

To my left, the regal Black Nazarene Jesus statue bleeds forever in his red, gold-trimmed robes. Above me, an enormous, pastel mural bears the Virgin Mary to heaven above a canopy of clouds on the ceiling. To my right, a half dozen street kids play on the church’s mural scaffolding. 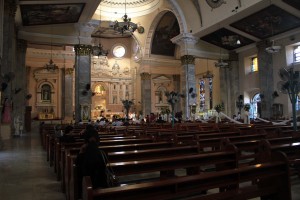 Then a stout woman charges down the right aisle of the church. I see her back, not her face. But her hair gives her away—the stubborn black bulb of it, despite her age; the fixed place of each strand. Something about the dictatorial style of this woman’s coif makes me say to myself, My God, she will live forever.

She is Imelda Marcos. Eighty-two-year-old widow of President Ferdinand Marcos, whose 21-year authoritarian regime plunged the country into poverty. She currently enjoys her position as House Representative, of Ilocos Norte.

Imelda is flanked by four bodyguards and one female attendant, all of them dressed in white. Her dress is black, with puffed, short sleeves. She sits near the Twelfth Station of the Cross, then changes her mind and moves to the front pew. An elderly vendor limps forward and tries to hand Imelda a ring of sampaguita flowers, but a bodyguard shoos her away.

I think, for a moment, that Imelda is here to attend the wedding. But then she abruptly rises and walks out the back exit without acknowledging the couple. The street children abandon the scaffolding to follow her with open, empty palms, ignoring her shaking head. It’s an impromptu parade: suffering following power.

To cope with the troubling, tragicomic scene I’ve just seen, I do as many Filipinos do. I sigh, turn to my friend, and say “Kain na tayo,” in my beginner Tagalog. It’s time to eat. 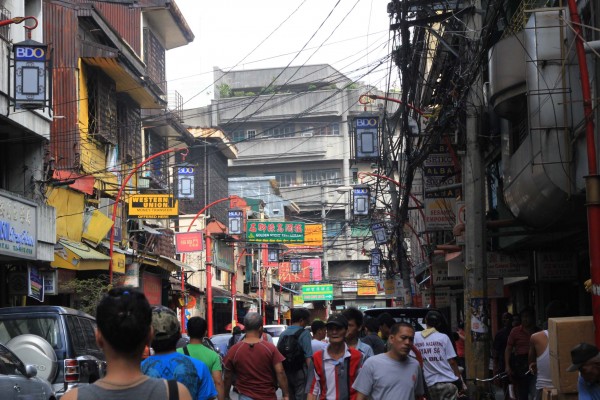 Eating is why most Filipinos visit Binondo now. Mention Chinatown to Manileños, and their eyes grow hungry and dreamy. They will name a street, and then their favorite food on that street. The milk tea on Benavidez. The fresh Xiamen Lumpia on Quintin Paredes. The countless kakanin in the alley on Carvajal. I shake off my amazement at the scene in Binondo Church and go in search of food, accompanied by a local Filipina friend.

We head into the crowded Plaza San Lorenzo Ruiz—named for the first Filipino saint—with its stone statue of Roman Ongpin, who stands holding an envelope at his side. Ongpin was a Chinese businessman who helped fund the revolution against Spain, and then the revolution against America, and so had the honor of being imprisoned by both of the Philippines’ major colonizers. 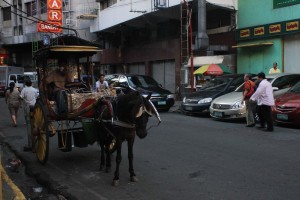 Near Roman, tricycle drivers napping on the seats of their motorcycles wake up and hiss-beckon us to ride, flapping their hands toward their empty sidecars. Kalesa drivers beckon us, too, tossing their cigarettes aside hopefully and rousing their skinny, sleeping horses.

The traffic in Binondo, though, isn’t something I want to brave in any vehicle, horse-powered or otherwise; it seems at a near-standstill, pouring in from all corners of Metro Manila. So my friend and I ignore the hisses and walk. We ease our way between jeepneys, motorcycles, and SUVs, my friend putting up an insistent palm at each speeding driver, who always seem to obey her and stop for us.

Some tour guides will instruct non-Filipinos to speed through this alley, eyes forward, bag tightly held, to discourage pickpockets. I appear non-Filipino, but I don’t rush, and I would never encourage anyone to skip Carvajal’s multicolored universe of kakanin—Filipino desserts—fat sausages, egg rolls, and noodles. I scan the bounty and choose a piece of suman, a small log-shaped dessert solidly wrapped in a wide banana leaf. I reveal a rectangle of sticky rice, sweetened and brightened green by screwpine pandan leaves. 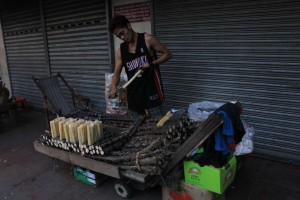 A sugarcane vendor in Binondo.

We continue onto Ongpin Street. We pass teenaged vendors in basketball tank tops, peeling sweet, purple stalks of sugar cane down to their white, fibrous, chewable cores. An elderly female vendor sells fish, nearby tiny crabs, and shrimp from small buckets; the shrimp keep wiggling onto the concrete, and she tosses them back in. We pass the shops that seem common to every Chinatown; vendors of red lanterns, mah jong sets, jade sculptures, and Chinese slippers; narrow shops for endless small errands.

We find La Resurreccion Chocolate, the decades-old, tiny factory of tablea, native chocolate discs. In her own dreamy hunger for Binondo, my Filipina mother often described her father’s Christmas recipe for hot chocolate: he would melt an entire roll of La Resurreccion chocolate tablea in a once-a-year pot of fresh cow’s milk, making sure it was so thick, the spoon struggled to move in her mug.

La Resurreccion sets its chocolate in a simple, outdoor, one-woman stand, at the foot of the stairs where the tiny factory makes its sweet goods. My Filipina pal purchases one 65-peso, paper-wrapped roll of unsweetened tablea, holding it under her nose for an anticipatory whiff of dark tsokolate. 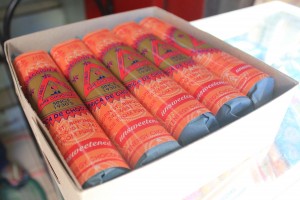 We bob and weave our way through Saturday traffic, my friend’s demanding palm up again. We pass under the tall, curved, hand-painted Filipino-American friendship arch. Barefoot street kids dart out ahead of us, bearing old rice sacks filled with discarded plastic.

We find the landmark purple fire engine; the vehicular signature of Binondo’s volunteer firefighters, parked on Ongpin across the street from Café Mezzanine, the firefighters’ signature hangout. It’s a dark watering hole upstairs, bright and bustling vendor of fast rice meals and Chinese hopia and tikoy downstairs, with a sign that declares it “A Smile Zone.”

On the quieter Quintin Paredes street, we find the Art-Deco Uysubin building. It’s home to the New Po-Heng Lumpia House, where a food writer friend told me she longs daily for the fresh Xiamen-style lumpia. The hallway leading to the Lumpia House is both forbidding and adorable. A slightly broken fluorescent bulb flickers over a squinting, sleepy guard, while the walls are painted bright pink.

The Lumpia House itself is an order-at-the-counter, fast-food-style cafeteria, with an open-air view of a quiet, green courtyard. It has an empty angel fountain, and sunlight filtering down to it, as if lighting a secret garden. The 45-peso, fresh egg roll has a pleasing, peanutty crunch, skinny strips of carrots and cabbage wrapped burrito-style in a thin sheen of seaweed and dumpling wrapper, overlaid with a brown, sweet sauce. 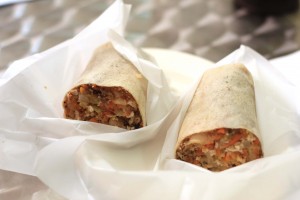 We head out to Escolta Street, the former Broadway of Manila. Shuttered buildings and abandoned alleys bear banner ads of Escolta’s fancier days; upper-class Filipinos dressed in their finest white, lining the streets with 1930s sedans, bringing their business before World War II flattened much of Binondo, and the financial companies moved to tony Makati.

But a bustle of negotiation still takes place in the Hua San Jewelry and Fountain Pen store. Middle-aged ex-pats argue over the price of gold engagement rings—for second or third wives, perhaps? I pause to eye the Parker/Sheaffer fountain pens gleaming behind their glass display case, and the fifties-style clocks mountain on the wall above them.

We cross a short bridge over a fetid tributary and walk gingerly under the scaffolding for a new high-rise condo. We pass a wedding arch of pink and red roses at the President’s Grand Palace restaurant, a palatial dim sum restaurant for special occasions that we’re skipping today.

Today we want Benavidez Street, where we sit upstairs in the bare-bones interior of always-crowded Wai Ying Fastfood. We sit at a sticky table and order chicken feet. I’ve never had chicken feet before, but I know Asians rightfully assume that the tastiest meat is closest to the bone. Though raised in California, I, too, can’t understand the American fixation on bland, boneless cuts of white meat. Wai-Ying’s chicken feet are spiced with chili and black beans; the tender meat falls away effortlessly from the small bones. We get boiled shrimp and pork siomai dumplings, and the best nai cha milk tea in Manila; grassy, chilly, not too sweet, with just the right splash of condensed milk rising ghostly around the ice cubes.

Downstairs we find bicho-bicho; Filipino donuts so good, locals quip, they had to name them twice. The vendor chooses a fritter as tall and thick as a bamboo stalk, picks up a pair of plain scissors, snips the fritter into a half-dozen chunks, then dusts them with white sugar. The bicho-bicho dough is ropy, chewy, and just sweet enough. I find that I’m not done putting fried things into my mouth, so we head back to Ongpin Street, where we find Shanghai Fried Siopao; fat chunks of savory pork and fresh chives tucked into a simple, flash-fried white bao bun. 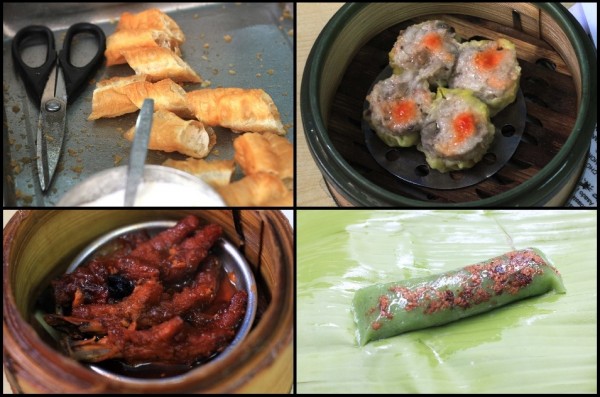 We see a young monk in tan-orange robes eating a pale tamarind popsicle. An older monk stands nearby, chatting on a mobile phone.

My friend points out a high-rise apartment building where a Chinese doctor once diagnosed her ills simply by looking at the whites of her eyes. He sent her downstairs to Ching Tay Chinese Drugstore with a list of herbs to purchase. Its tiny space is packed with customers, its shelves stocked with more mushrooms, teas, and labels than I can categorize. The storefront smells like strong, pleasing ginger. A Filipino nun bargains cheerfully in Tagalog over two scales weighed with herbs.

I briefly consider, and then decline, a hot pink plastic rosary held out to me by an elderly woman.

Our last stop is at Tomas Pinpin street, named for the first Filipino to set up a native printing press. There is a Catholic altar named for him, too, inlaid into a wall at the corner of Ongpin. A human-sized gold cross is draped with long, braided strands of sweet-smelling sampaguita flowers—what the poor vendor had tried to hand to Imelda Marcos earlier.

Visitors stop to light candles and incense and bow their heads for a moment. We watch the flames move a little in the afternoon breeze. The incense smoke rises and disappears into the air of Binondo.

5 Uncomfortable Truths About Living in Manila

9 Signs You Were Born and Raised in Manila