“Where?”
-Everyone I’ve talked to.

ONE LAST RESORT FAMILY CONNECTION got me in Sayid’s Honda Jazz, which proved plenty capable of navigating the sandy tracks inside the minefield. We quickly reached the ‘border’ dividing Western Sahara’s two territories where the multiple plaques, flags, guards, and military very obviously spelled out that this was “Morocco“, although more telling was the lack of black people in this place only a few minutes north of an entire town of them. The few black Africans present in the visa check were getting grilled, looking uneasy, and it couldn’t have improved their mood to watch me get waved through thanks to my American passport. 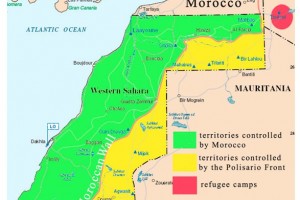 The dirt road returned to pavement as we exited the “No Man’s Land,” a nice leftover from the Spanish decolonisation and withdrawal from the territory of Western Sahara and the subsequent war between Morocco, Mauritania, and the actual locals, the Polisario. Spain couldn’t decide whose side to take, so they just left. Since Morocco was the only country that possessed any drinking water within its borders, it quickly gained an unfair advantage. After pushing everyone out they laid claim to what’s now Western Sahara, and over the next 30 years meticulously landmined the shit out of the entire border, backing it up with a three-meter-high fortified sandwall 2,700 kilometers long.

As we crossed the No Man’s Land, we passed a Guinean man traversing the landmined area on foot, attempting to hitchhike. Talking to him later at the Moroccan border post, he seemed completely oblivious of the mine field he had just navigated, and instead was very focused on getting to Rabat, where he believed he had a job waiting. What this job was he didn’t know, but he definitely didn’t laugh when I recommended setting up an egg sandwich stand. 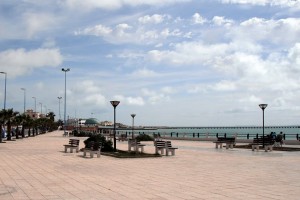 So from there we took the short 350 kilometer drive to Dakhla, the sardine and windsurfing capital of Sahara. Located on a long peninsula with a gorgeous bayfront (interesting that the second city in a country that isn’t even a country has a better promenade than Dakar), the town itself is mainly composed of “expat” Moroccans. Cafes are everywhere, packed the entire day with men always almost finished with their espresso. It’s socially unacceptable for women to enter these cafes, but it wasn’t surprising considering how rarely I even saw them in the street. Multiple times the men would comment on a beautiful girl, and each time I would spin around and see either nothing or nothing but a veil. Maybe there’s some technique that I don’t know about.

We spent some time wandering Dakhla’s clearly preplanned layout of practical but plain housing complexes and huge boulevards that may or may not have anything lining them. The government also spared no expense when it came to walkways, and the city has more pristine sidewalk space than the city’s inhabitants could ever walk. Even miles outside of the town center the road was still conveniently lined with street-sized sidewalks, which I discovered after deciding to hitchhike. 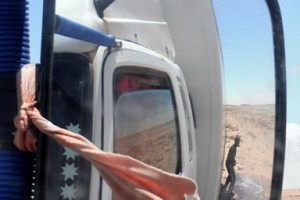 My driver lets out the now-melted sardine blood.

In Sahara, there are tons of trucks doing the long haul up the coast and there’s only one road, perfect for hitchers. Hardly five minutes after waiting I was sitting in the cab of a large sardine truck. My driver was very excited to hear I was American, and we promptly bonded over soccer and Obama, as usual.

Every couple hours we took a quick break as he evacuated the fish blood. Even with all the truck’s refrigeration, long hours of sun melts the ice, causing the formerly frozen blood to mix with the sardines, and so must to be let out every so often to keep the fish from marinating in their own blood water. The gush of sardine bloodwater looks a lot like the wet end of a fire hose, but disgusting. Down the road I thought, ‘This must be the only country in the world with street signs prohibiting you from dumping your fish-blood-water.’

Tagged
Narrative Morocco
What did you think of this story?
Meh
Good
Awesome

Morocco's Most Pristine Resort Is the Epitome of Luxury in Merzouga