But I did get thinking about the concept of love. Is a one night stand an example of love? Is friendship or is fucking a better example of love? Or do they both qualify and to what ends? I remember giving my freshman composition class an assignment to define a word. A young student chose to define the word love. She gave all sorts of examples from her present relationship: she couldn’t eat, she couldn’t sleep, she thought about him every moment. I told her that she was defining the word infatuation, and she became angry with me. I tried to explain to her that infatuation is actually stronger than love, and she shook her head. “No,” she had said, it was obvious that I didn’t understand real love. Because I love words and their precise definitions, I argued that she could at least call what she was feeling “romantic love.” She didn’t like the compromise; for her, adding the word romantic somehow diluted the power. No matter that two weeks later she had moved on.

However, like my student, I didn’t want to differentiate between friendship love, one-night-stand love, or soulmate love. I thought so much about all of this that my head began to spin, and I started asking my neighbors on the playa what they thought. I asked a man I met in my favorite bar, Celestial Bodies, what love was. This man, who ironically turned out to be named Gabriel, said, “Everything is love. Love is a column in the universe, and we are all part of that column.” I am too cynical to chant the om’s at the end of yoga, and I couldn’t picture a column of love any more than I can picture Emerson’s transparent eyeball.

But that is just the point, we cannot describe love without metaphor, which I have to admit makes the poet in me very happy. But because I couldn’t quite get on board with the column of love, I decided to pay better attention, to create my own metaphors.

In paying attention, I realized that out at Burning Man, I didn’t need metaphors—affection is the outward manifestation of love, and it was all over the playa. Couples, young and old, were holding hands. And I wondered, is the giant column of love more present at Black Rock City than the rest of the world? Or are the couples who are drawn to Burning Man the ones who would be holding hands anyway? I couldn’t decide.

My friend Nano said, “The hand holders definitely would be more likely to come to Burning Man.” Maybe that’s because we are embarrassed about our feelings. We prefer logic, we prefer to have our emotions under control. We don’t like to own up to our animal selves. So, when feeling overrides thinking, we often feel shame, we often apologize.

Often, we are embarrassed about love and lust—it is our bodies, our animal selves, doing what they want without the ruling brain telling us our natural inclinations are naughty. So, naturally, less shame means more displays of affection. Manifestations of love become the norm, whether that means outward demonstrations of affection or helping your neighbor set up his tent in a windstorm. In a society that wants to mandate who can marry and who can’t, I think we can take a lesson in love from Burning Man. 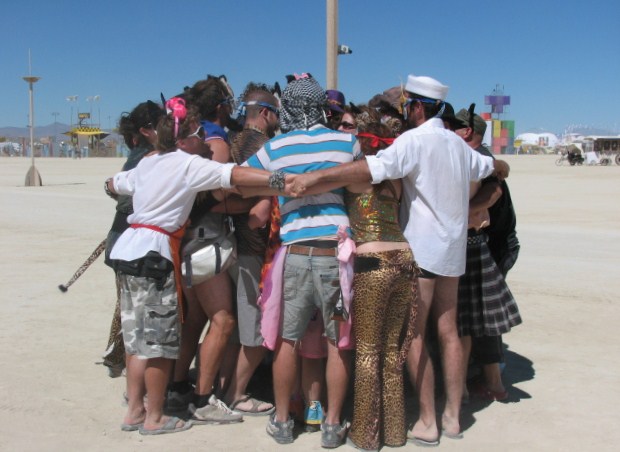 The proclivity toward displays of love at Burning Man is also a by-product of living in the moment. Without much cell phone coverage, no one is walking with a friend but talking to another. No one is looking down at the texting screen instead of out at the world. Everyone is present. At my college campus, every other student is texting, emailing, or talking on her cell phone. No one is right there with the people she is with. This sort of fractured attention span makes it impossible to show love and affection to the people around us. In fact, not only are we holding back love, we are being downright rude.

In the last century, Flannery O’Connor said we were a nation that had lost its manners: she didn’t know that half of it. I tell my students to turn off their phones, to let their friends leave messages, to make it seem like they have lives (I actually wrote this on my syllabus this fall).

Yet, at Burning Man, everyone is in the moment, living a full life right there, enjoying the desert landscape, the art, their new friends. A trip to get ice could turn into a belly dancing lesson or five hours in Center Camp if a dust storm blows in, which is a real opportunity to build community.

Last year, I was riding my bicycle on my way to the “Geology of the Black Rock Desert” class at the Earth Guardian Camp, and I stopped momentarily to watch a live band perform on the Esplanade. After a song, the crowd clapped and cheered with more affection than Lady Gaga fans, and the lead singer introduced the bass player, who he himself had just met and then said, “This will never happen again.”

He meant that the music, the group performing, the exact spot—this was Burning Man, after all, a celebration of creativity, of community, of impermanence. After the geology lecture, which my campmates referred to as the “geek camp,” proving there is something for everyone at Burning Man, even for geeks like me, the wind picked up. I hurried to Center Camp, hoping the swirling dust would settle in the time it took me to drink an iced latte.

No such luck, or maybe it was lucky: I was stranded in Center Camp for five hours, and a dust storm whirled outside—hardly my definition of hedonism. I spent the time talking to some new friends through my goggles and dust mask. While it is true that Burning Man promotes creativity and self-expression, self-awareness and boundary-bending, so much of it is not exactly pleasurable, including this dust storm, which lasted nine hours and tested this burner’s radical self-reliance. Yet, the beauty of the dust storm is that it removes the borders between me and the natural world, making me realize that we truly are connected to the natural world, and oftentimes are at the mercy of it.

When we are at the mercy of nature, we seek out each other. A dust storm forces community. Because I have always had a terrible sense of direction, even when I can see, I knew I would never find my way back to my dusty tent, but my new friends, Racy and Sapphire from Oregon, went out of their way to ride with me. At Burning Man, it is possible to rely upon the kindness of strangers, serving as an antidote for the often individualistic nature of our society, and if that isn’t love, I don’t know what is.

Burning Man can teach us the creative ways that self-reliance, artistic expression, and a gift economy can make our lives—as temporal as they may be—better both on and off the playa. At Black Rock City, it’s possible to give the truest gift of love, uninterrupted attention to those we are with. This immediacy, and maybe the ephemeral nature of Burning Man—the city disappears after the event, literally, without a trace—encourages displays of love.

Affection and acts of kindness are the currency of love’s economy. Words and metaphors continue to fail me. I can’t describe love, not exactly, certainly not with as much certitude as my new friend Gabriel, who pictured a column up to the cosmos, but I can’t exactly describe Burning Man either—like love, it’s just one of those places you have to go yourself.

We published an interview with Suzanne Roberts a few months back.

Check out our resource page on Burning Man for more about the playa.

The Best Art From This Year’s Burning Man
Don’t Hit the Road Without Reading This Perfect Las Vegas To Zion Itinerary
There’s a Micronation in the Nevada Desert You Can Visit With Its Own Currency, Customs, and President
This Epic Burning Man Drone Show Blew Everyone Out of the Water This Year