View all travel news
Top Countries
Top CitiesView All Destinations
Trending Regions
Trending Cities
Load More
Suzanne Roberts goes to Burning Man to document ‘found love’ on the playa. Her only problem: how to do this while still participating?

“I’M DOING a project on found love at Burning Man,” I told a new friend on the playa. He was dressed like Tigger from Winnie the Pooh.

“You mean like one night stands?” he asked. His nails were painted orange to match his fur.

I tried to explain my version of found love, as in a found poem or found piece of art—love that was already there. So rather than ask people dressed in crazy costumes to pose, I wanted to find them already posed, take their picture, and write some sort of pithy caption. But, I realized that finding love, in the form of a one night stand, is also a type of found love. I told Tigger I went out to Burning Man this year with a project in mind.

Truth be told, I love camping, cocktails, costumes, community, art, and gifting (Burning Man runs on a gift economy), as much as anyone, but I am never truly happy unless I have a project. So, I decided rather than to gift glow-in-the-dark trinkets, I would gift my time and my creativity: I would write a book about love on the playa, accompanied with photographs, and I would donate any money from said book back to Burning Man via Black Rock Arts Foundation. 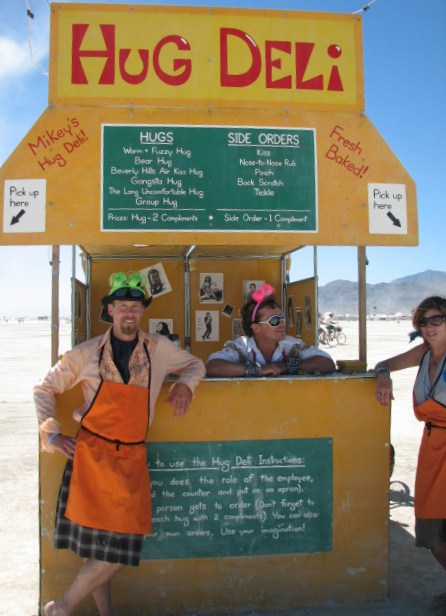 The previous year, I had been drawn to all the hand holding and smooching, and though voyeuristic, that’s what I took pictures of, so when I got home, I decided that my theme would be love on the playa—all kinds of love, boy-girl, boy-boy, girl-girl, friendship, and families. So I had my project. Then, I set up the rules—I would only photograph what I came to call “found love.” I would not ask anyone to pose. I might not even tell people I had photographed them if they were not identifiable. I would be sneaky.

The problem was that when I arrived to Black Rock City, I wanted to participate not spectate. How could I do both? At the hug deli I both wanted the “warm and fuzzy” hug in exchange for two compliments, and I wanted to take pictures of the booth. I wanted to join the group hug, and I wanted to photograph it. Truth be told, I did a half-assed job of both. I didn’t get the pictures I wanted, and I missed out on the group hug. This happened to me all week.

Next Page
Tagged
Narrative Nevada, United States
What did you think of this story?
Meh
Good
Awesome

May 11, 2022 Eben Diskin
✖
travelstoke
Download the mobile app
stoked by