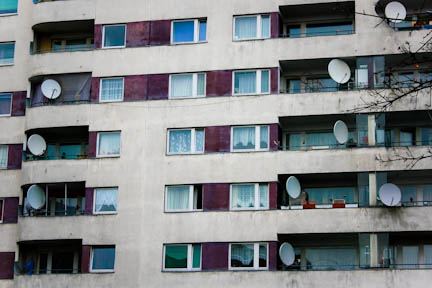 Each unit with its own story. Apartment complex in Berlins Kreuzberg district. All photos by the author.

We had nowhere else to go. The man who had answered our emergency request welcomed us, smiled as he corrected our pronunciation. I spent a sleepless night staring at the Banksy prints on the walls, then dozed under the Eiffel tower the following afternoon. We ate baguettes and brie in the Luxembourg Gardens; I photographed old couples in matching trenchcoats. Jason and I climbed nine flights of stairs to a maid’s room with a view of the Latin Quarter. Dee had lost her phone at Las Fallas but we found her wandering by the Seine and shared a bottle of wine as the sun set. 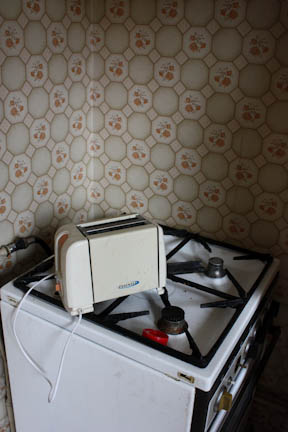 Alex said her art was perishable because she was impermanent. She made cellophane mountains that contrasted with the flatness of the low countries. Her CouchSurfing profile featured an album called “Me Balancing Things on my Head.” There was no heat. Em and I slept on two ripped flower-print mattresses on the floor, wrapped ourselves in all the clothing we had packed. We ate at a vegan squat, danced to 80’s New Wave at a party squat, participated in a “food experiment” at a squat in a former gay sauna where the coat check girl drew a naked woman on my arm in Sharpie. I had my arms around the waist of a German man who giggled as he piloted our Dutch bicycle through the Grachts and Strasses. Alex led the way, singing “Bohemian Rhapsody” at the full moon. We drank too many razzperinhas, lost an hour to Daylight Savings, sped past blue and purple houses that leaned on each other like tired children.

Lev served us dark beer and beherovka in his kitchen. We headed to Cross Club, which was recommended to us by a long-haired Czech man while drinking mate one morning in an Andalusian hostel. Cross Club was a labyrinth of steampunk machinery – gears and generators, junkheap industrial chic. I was dancing to a reggae band from the Netherlands when I bumped into an acquaintance from New York. “I can’t deal with this right now,” she said as a greeting. We bought fried cheese from the vendors at Wenceslas Square at four in the morning, two blocks away from the spot where, forty years ago, Jan Palach set himself on fire. 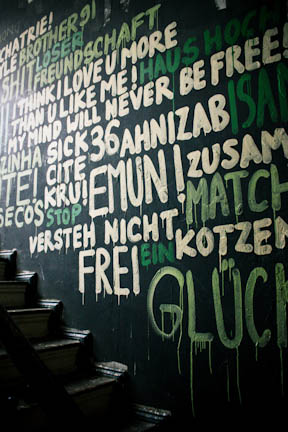 She was up writing a paper on German philosophy when we arrived at 5am. Em and I slept on the floor in a makeshift nest of clothes and couch cushions, woke up to her roommate washing dishes in the nude. Later she strummed the guitar and told us about her failed attempts at freight-hopping. The hausmeister had a lazy eye, wore overalls, didn’t understand English and so didn’t give me keys to the laundry room. We feasted on Franziskaner Weissbier and baklava on the S-bahn, dressed in evening dresses and fishnet tights. Anastasiya told us about the generational responsibility shift and the presence of absence. Twilight made her uneasy. We went to a drum n bass club where the DJ spun the same beats for hours. I feigned an X-step, bounced my body through the darkness, lost myself in the crowd. When I found Anastasiya again she was asleep in the hallway.

We shared the living room with a drum kit, two guitars, a bass, a harmonica, a washboard, three touring musicians, and two dogs. Johnny wore a hospital bracelet on his wrist and told me about growing up in the Las Vegas barrio. He said his father brought home pieces of Soviet drones from his job at Area 51. Winter’s 4×4 had teeth painted on the fender. We snuck into an abandoned building to read poetry – Jonah Winter, James Tate, Henry Rollins. I was introduced as a visiting deaf-mute to a girl in a feather boa because I had lost my voice in Albuquerque. I sat on top of a parked freight train with a boy who loved mountains. I couldn’t speak so I listened – to the wind howling through the desert, to the hum of a Tibetan singing bowl, to the story-telling gravel-crunching tea-pouring travel song, and the sound of things falling into and out of place.

We lay in the grass, discussing university culture and the people you met while waiting tables.

I was too embarrassed to do the double cheek kiss when I met him in Plaza de Obradoiro. Two days of hiking the Camino de Santiago left me sunburnt and disheveled, my hiking boots caked. I had seen dogs dozing on dusty farms, dodged bikers on narrow mountain ridges, shared snacks with Finnish sisters who sang as they walked. Vincenzo had a cold. He wore mirrored sunglasses, I wore flowers in my hair. We lay in the grass, discussing university culture and the people you met while waiting tables. I ate octopus, I ate a Magnum bar, I ate tapas which came free with beers. Vincenzo was from a small town in the south of Italy where family was the main priority. People think you are weird if you leave, he explained, until you do it often enough. Then you become known as a traveler. Each time, he said, it gets a little bit easier.