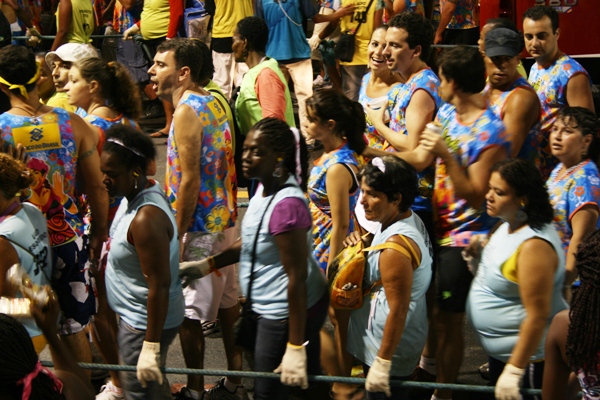 Photos by Julie Schwietert
We’ve been publishing several photoessays on Carnival in different places. Here’s a note about Carnaval in Salvador that shows a different side. Julie Schwietert recalls those holding the ropes.

Brazil seems far away this morning.

It could be the six inches of snow on the ground.

Or maybe it’s the fact I never really connected with anyone or anything there the way I always do when I travel.

But still, there are some things I can’t get out of my head, some things that will only begin to make sense if I write about them, some images that stick with me more than costumes and dancing and music:

The facial expressions of revelers compared to vendors.

Tired from flights and still feeling everyone out, I refrain from pointing out what I consider to be the obvious: Race and class have almost always been linked, especially in the Americas.

“There’s not a race problem in Brazil,” an American colleague tells me authoritatively. “It’s a class problem.”

Tired from flights and still feeling everyone out, I refrain from pointing out what I consider to be the obvious: Race and class have almost always been linked, especially in the Americas.

I notice it the first night of Carnaval in Salvador, on the circuit near the waterfront.

The people accompanying the floats, those who have paid for the privilege of wearing a shirt that permits them special access inside the ropes, close to the float, are mostly white, mostly young.

The guys look like American frat boys: they wear sunglasses at night, they have a beer in each hand (bought from mostly black vendors), they slap each others’ backs or curl their arms around each others’ necks in a headlock… the strange intimacy of men.

The women are the perfect weight, many with blond highlights, their t-shirts trimmed into deep V’s or tied with a mid-riff knot. 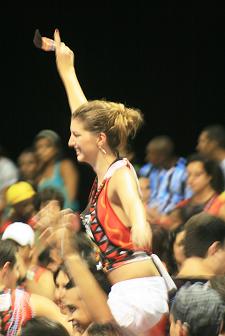 They’re all smiling, rows of nice white teeth. They’re happy. This is Carnaval!

Unless you’re on the ropes.

The smiling bright crowd, pumped on music and beer and just the idea of being here, moves forward with the floats, and they’re all reined in by ropes.

Held by the hands of hundreds, the ropes keep payers in, riffraff out, and set the pace for the moving mass.

Most people holding the rope are not smiling. They’re concentrating on their work. They’re tired.

When the float stops, unable to advance, the people holding the rope sink to the pavement for a moment’s rest, oblivious to the rivulets of beer and urine left behind in the revelers’ wake.

It’s then that kids dart up and down the street, collecting cans. The kids are black, as are the people holding the ropes. They have shirts, too… only they didn’t pay hundreds of dollars to wear them, charging it to their credit card and paying it off for the rest of the year (so goes the rumor).

I can’t stop thinking about them, this morning, early in New York, as the snow keeps falling.

[Editor’s note: this was remixed from Julie’s Blog at Matador. She also notes: “I should mention that each city where Carnaval is celebrated in Brazil is distinctly different. In Pelourinho, a suburb of Salvador, the feel is definitely much more “by the people, for the people”– and I felt a tremendous difference there as a spectator as a result.”]

The 10 Best Venues and Shows in Salvador, Bahia, Brazil

Best Places To Study in Brazil