View all travel news
Top Destinations
Top CitiesView All Destinations
Trending Regions
Trending Cities
Load More
Tom Gates travels from Boston through Amsterdam, Paris, and Stockholm, where he finally meets the person who inspired his round the world trip, and reflects on the journeys so many of us have taken, and continue to take at Matador.

I have blagged my way into the British Airways lounge by complimenting the check-in lady on her silver dollar-sized earrings. They’re hideous.

First Class lounges often find me buzzed on odd combinations of cheese, water crackers, Kahlua, Campari and any other kind of odd liquor/liqueur that it never strikes me to try at home. Today is no exception.

The guy across from me is wearing a cardigan and reading Yacht World. I want to put him in front of a speaker and blare Ramones and shake him from his necktie existence, to give him a tour of a world where he doesn’t have to gingerly cross one leg over the other. He’s fine wine and I’m a Jello shot. He can have his yacht and I’ll keep Joey & Dee Dee & Johnny & Tommy.

I cherish these odd shaped rooms, full of stained chairs and stinky-pitted businessmen. They portray excellence and the opposite of the double-coupon clipping class from which I am bred. Here I am regal because I can eat cubes of Monterrey Jack for free.

It’s been a longstanding dream of mine to be the first person to sleep in a new hotel room. I’m checking that one off tonight at this hotel, which is in previews. 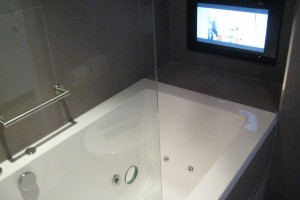 The room is a monster success – sleek, big, and comfortable. A flat-screen-TV-in-the-shower kind of joint. There is zero aroma of cleaning products and only a slight waft of fresh paint.

I become obsessed with taking the room of its virginity, making sure to try everything for the first time. Kind of like in Del Mar, I open curtains, drawers, cabinets, the mini bar and sewing kits. I am the first one to go potty in this room, and the first to realize that the bathroom has no windows.

I imagine the things that will happen in here. Children will be conceived. Someone will cry in bed after hearing bad news from home. A woman will say “aw, fuck” in the bathroom as she realized that she’s forgot Playtex. Another will pace as she waits to find out if the pregnancy test reads positive, contemplating abortion.

A couple will have an hour of silence as they each imagine the words that will hurt their partner the most, then turn the thoughts into perfectly formed, piercing words. Relationships will end. Relationships will begin. A teenager will suffer through having to share a room with his parents. A drunk man will punch a mirror and require stitches.

Someone will smoke way too much weed and have three traumatic hours on the bed. A man will dance to James Brown in his underwear. A woman will try on four outfits, only to leave in the first one. A man will be impotent on his wedding night.

And surely, someone will die.

The restaurant tic. I have to find the right restaurant. The right one is the one that is stumbled upon, gut feeling, after a lot of wandering. They all call to me like hookers:

I was looking for vanilla.

Or are you the shady lady with twenty two pounds of week-old scallops?

There it is. Italian place, rammed to the rafters with chalkboard specials. Twenty tables, if that. Put me in the corner. I am in Le Marais and I want to get wine-drunk and stare at gossipy French homosexuals.

I order a lifeboat of antipasto, which comes piled on a cutting board, all kinds of pretty. A marvel. Prosciutto and eggplant and mozzarella and artichokes and mushrooms. Some other kind of pig, too. I consume it like an aristocrat for the first minute, then like a caveman for the next nine.

50cl of Tellus rouge fuels the operation and stains my left cuff. I don’t know what a cl is. It’s a lot.

I am people watching as the spaghetti bolognese arrives, via a dumbwaiter above the bar. It is fresh and is as sweet as Bambi. It is gone as fast as it arrived. I’ll come back here every time I’m in Paris.

I have wanted to meet Lola Akinmade for over two years. She is the spirit of Matador, blasting positivity through the staff, readers, and students. You’ve probably seen her somewhere on the site, jumping in a photo. It’s her thing.

Lola does not know that she was the patron saint of my 2009 round-the-world. I felt her on my shoulder, pushing me forward and somehow protecting me. I am not at all religious but it was a religious kind of feeling. It was something else to have this person who feels so pure-but-not-puritanical keeping an eye on you.

My writing is turgid and weird and filled with the kind of things that make therapists drool. How’s Matador’s soul guru going to hang with the guy who sucks face with randoms in Chilean tree houses?

That’s what tenses my guts as I go to meet her. Given my impression of Lola – the pure thing – I wonder how in the world she’d even give me the time of day. My writing is turgid and weird and filled with the kind of things that make therapists drool. How’s Matador’s soul guru going to hang with the guy who sucks face with randoms in Chilean tree houses?

Her newish husband and stunning sister joined us for a traditional Swedish meal, which did include meatballs. I tried to keep up with Lola’s unique accent; a little Nigerian, a little DC and a little Swedish.

We talked about things that travel writers do. Places, things in places, people in places and inspiration. Not to lick the balls of Matador, but we also talked about what an incredible ride it’s been for the site, and the people that it has brought up with it. Lola’s been here for a while and can step back and see lives changing.

I reminisced about how I had never written anything before Matador. Two blogs later and I was on a conference call with Ross Borden and David Miller, both of whom talk like a cross between The Dalai Lama and Ton Loc.

“Tom, it would be so boss if you edited our Life section. You’re enlightened. Straight up, we like your shit.” I didn’t have any experience or training or regard for how long sentences run on, nor did I have any training in maintaining a website. I had, and still have, a fierce disdain for coding. “Yes, but you have heart, and that is all you need in this world. We have a dope feeling, dawg. Get some!” Hired.

I think about those in MatadorU and wonder if they really get it. I have both feet back in music business now and see it with musicians all of the time – there’s luck, but if you’re really good then you’ll get your shot. You just have to find the outlet. Matador is one of the few places that allows for the travel writing shot, and the encouragement when you still kind of suck. It’s an important platform if you’re a jumper.

I once edited a piece for three hours from someone who spoke English as a second language, just because I wanted so badly for her to win. I’d spend about another 10 hours editing her subsequent pieces, until the training wheels were off. If you’ve ever turned in anything that has heart or an original voice at Matador, you’ve probably had the same experience. Matador wants heart. Verb tenses will come.

There are so many quirks about The Matador Approach To Publishing that I love, that are a part of me. To illustrate what’s behind the curtain, I’m looking back at my old emails and a David Miller email to the staff on September 28, 2009 will serve as an example:

Ladies and gentleman, I’m hereby declaring war on anything that sounds like canned writing. If a single platitude comes up in a draft, please delete it immediately, and if it seems like you’re deleting every other word–“polishing a turd” as carpenters like to say–then let’s question publishing it at all.

For a year and a half I winged it. Or wung it. Where’s my editor? My most frequent commenter, other than Tim Patterson and Julie Schwietert, was Lola. The more whacked out my stories would get, the more she’d encourage me. She’d find the pieces of my writing that I was most afraid to type and zero in on them, pointing out those exact things as positives in the comments.

I realize that Lola effuses positivity in a way that is not put on, which is to be savored. But I think I’m getting something more now, as I talk to her here in Stockholm. I think I’m realizing that Lola would only plug herself into a job where there is love. And care. And compassion. And spirit. She’d never spend a day working for a boss who screams. Any guidebook or travel outlet would die to have her but she has instincts about what will make her fulfilled.

She’s found that in Matador. She doesn’t care that Matador is held together by duct tape and wi-fi. She does it because she feels connected with whatever energy comes out of our ragtag group. That’s the purity that guided me.

I get it now. Her divination is just simply love.