PHOTOGRAPHER PAUL-HYNES ALLEN’S work has often been rooted in the concept of the outsider — the individual apart, oftentimes “the stranger.” It’s a concept that has driven him in the pursuit of artistic progress, but helped him also to overcome the impact and scars from a turbulent past.

Hailing from Croydon, south London, he first came to Berlin in 2004 after finishing his BA at Brighton University. The migration, he admits, was prompted more by internal reasons than any external draw. “I had this ‘why not?’ mentality at the time,” he says. “It was just kind of a crazy thing I did.” A crazy thing that has left him anchored in the city ever since.

Like many artists, Hynes-Allen defines his work as semi-autobiographical; it brings to mind names like Rilke, who used practical knowledge and psychological insight to seek truth in the external environment. “My work is about my experiences and I try to expose the trauma I find within the developed world. I choose to photograph the area I inhabit — I always have.”

His first project, entitled A Sense of Madness,” found him moving in with a friend who was heavily disturbed both by mental illness and substance abuse, for a period of months. In this series we witness the daily degradation of an individual in pain, the personal and sentimental images of the photographer building a sympathetic but unflinching portrait. “It was extreme,” Hynes-Allen says. “But I sometimes think it’s the best thing I’ve done.”

Here in Berlin, his work and methodology are less radical, but fascinating nonetheless. “My latest project is made in the streets. It’s about portraits,” he reveals, “but they’re environmental as well, so the background is also very important.” The series, called “Berlin Outsiders,” is an ongoing case study into Berlin’s homeless community. These thought-provoking pieces utilise the power of juxtaposition to promote varying interpretations and effects. 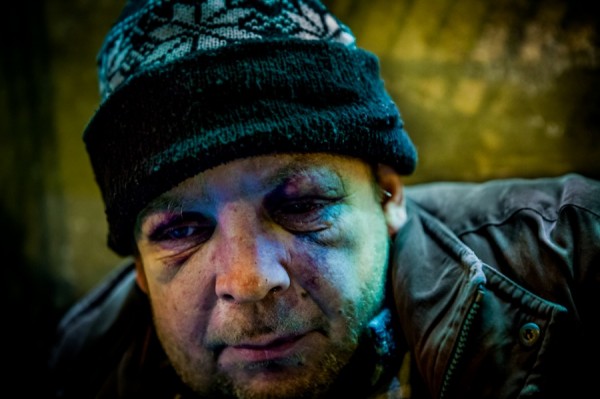 Each photograph provides the audience with a brief glimpse into a world so many of us are too timid to confront with any level of intimacy.

Within each frame, beyond a facade of bruises, dirt, and other symbols of indigence, we are able to easily locate the human being: isolated and still, distracted briefly from the eye of a storm that oft-defines their life experience.

The series is an attempt of an artist to get in touch with himself as well as the place he has come to occupy. But conversely, as viewers, we are forced to ask similar questions: What do we recognise in the faces in these photographs? How much of ourselves do we see within them, and to what degree do they help us understand the place we call home?

Though the project inherently provokes sociological analysis, Hynes-Allen is insistent that this is not its purpose. It goes above and beyond, he says, aiming “to explore the relevant issues of loneliness and isolation.” His goal is to “touch people on a personal level and in an emotional way. “To use Freud’s terminology,” he says, “I want the image to stay on an ‘optic nerve.’”

Though existential in theme, “Berlin Outsiders” bears relation to Romantic realism in its attempt to present the pain of others as a strength rather than a weakness. In that, the series is universal: We all struggle with demons that sometimes attempt to overcome us. Berlin draws more than its fair share of dreamers, the necessary flip-side of which is disillusion.

Interestingly, Hynes-Allen often sees his work rejected or misunderstood, usually beginning in the very process and act of making it. On the streets, when engaging with his subjects, passers-by will snicker, shake their heads, and recurrently assume the worst — that his subjects are being taken advantage of. 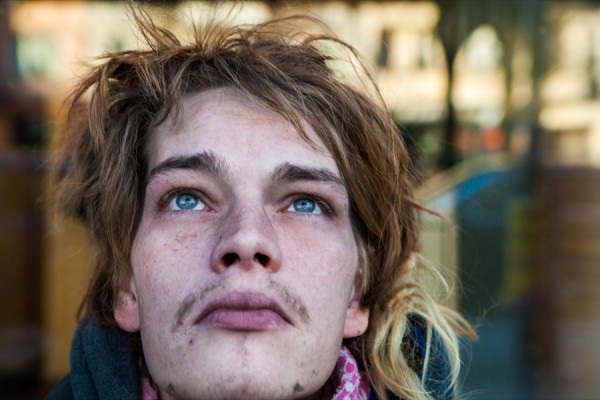 Like any good photographer, he’s acutely aware of the sensitivities and ethics around these kinds of interactions.

“Sometimes I feel really guilty. If a photo-shoot doesn’t go right, that can trigger off a series of sort of bad feelings about myself and about what I’m doing with photography. I’ve got a conscience and sometimes I suffer…maybe a little too much.”

There is also the danger of getting too close: “I’ve got a responsibility to avoid giving these people false hope. I’ve realized I can have nice moments with these people, but I know in the end that I can’t help them. Their path has got to come from themselves.”

His ultimate plans for the series?

Perhaps he’ll make a book, maybe present his work in a gallery if the time and setting feels right. “I would only sell my work through the right channels,” he states. “I also don’t want to devalue the people I’m photographing.” For Paul Hynes-Allen, it’s all a question of respect — respecting one’s own craft, of course, but also the people and places that go into making it possible.

This story was written by Jack Seemer and originally appeared at Slow Travel Berlin.

Tagged
Travel Berlin, Germany
What did you think of this story?
Meh
Good
Awesome