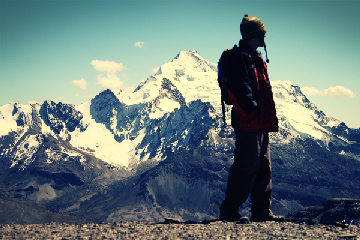 Photo by a song under the sugar sugar

YOU DON’T MISTAKE travel writing for punk rock. Most of it just isn’t loud or raw enough. Publicly, at readings, travel writers tend to restrain themselves from smashing the podium or lighting shit on fire.

The process of creation itself (and the audience’s reception) is generally an ass-to-chair kind of deal, often with food and / or beverages nearby [writing these lines with a tomato and cheese sandwich + coffee in a cafe in Santiago].

Still, I’d like to imagine a scenario where travel writing was 100% punk. Where you were all-out free to write anything about anyone or anyplace in any style you wanted, free to investigate and write the stories of what’s going on in say, the cruise ship industry, only from a deckhand, not a passenger’s point of view. Or with the Kalahari Bushmen. Or maybe the fucked up lady that lives right above you in your building.

The fact that we all actually have this freedom but so few of us choose to exercise it is partly a reflection, I’m guessing, on human nature (paraphrasing Saul Bellow: “We get as much truth as we have courage to ask,”) and part straight up bitch-slapping economics.

There appears to be no dearth of paying markets for stories that lend themselves to advertising, but far fewer options (and certainly far less sustainable options) for writers going after stories on people and their relationship with place, which, to me anyway, is what travel writing is. As Jim Harrison wrote “How could we disappear into ourselves and forget our subject matter, the earth?”

Obviously I recognize the need for other kinds of writing (and have actually enjoyed having a copy down here of the Fodor’s Patagonia that Tim Patterson and I contributed to last year).

But most of all I’m interested in reading the stories people write not out of a need to accomplish or get paid but just out of a raw need to tell the story. And unless or until someone is out there writing / editing / and publishing their work in real time as they’re getting shot at in Iraq or patrolling the mountains in Afghanistan, I guess that’s as close to punk rock that we as travel writers can get.

So all of this blathered, I asked around our crew what we should include in a list of travel stories published at Matador which are the most punk rock, the ones that seem to keep reverberating:

– Huayhuash: A Convergence of Change and Resilience

– Another End of the Road: (Still) Searching for Surf in Centroamerica

– What would you give for your traveler’s moment?

– Growing up in East Germany

– Notes on Not Being Able to Pray at the Wailing Wall

*Get access to paid freelance travel writing opportunities and an active community of travel journalists by enrolling in the MatadorU Travel Writing program.