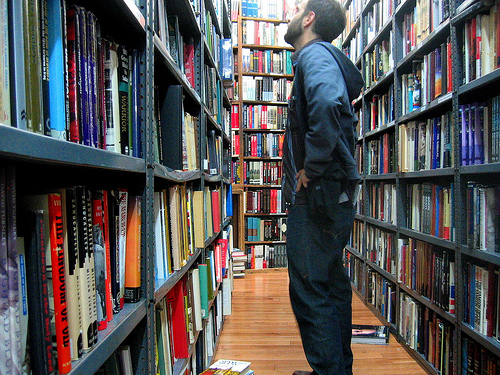 I’m slightly suspicious of superlatives— you know, the best of this or the worst of that– so I tend to approach them with some skepticism.

Professor and researcher Dr. John W. Miller of Central Connecticut State University has just released the results of the 2008 study of America’s most literate cities. Miller, who launched the America’s Most Literate Cities study in 2003, examines six indicators of literacy:

Based on his review of available data, culled from other sources (such as the American Booksellers’ Association, National Center for Education Statistics, and the U.S. Census Bureau, among others), Miller reports that the most literate cities in America in 2008 were Minneapolis; Seattle; Washington, D.C.; St. Paul, Minnesota; San Francisco; Atlanta; Denver; Boston, St. Louis; Cincinnati; and Portland, Oregon.

Now I’m not saying that these cities aren’t highly literate, but it’s hard for me to believe that New York City ranked 24 on the list. With one of the most respected newspapers in the United States, thriving bookstores (just try to plow through the crowd at The Strand), and one of the best circulating and research libraries anywhere, Miller’s list has me itching to travel to these other cities to see how they bested the Big Apple.

What do you think of this list? And what would you rank as the most literate cities outside the United States?

Tagged
News United States
What did you think of this story?
Meh
Good
Awesome

This small and remote Scottish island is looking for new residents
Italy is reviving a Black Death tradition by reopening ‘wine windows’
10 treasure chests containing $1 million each to be hidden across the US
Scientists to dive into an unexplored ‘blue hole’ at the bottom of the ocean
Wombats are the heroes of the Australian fires, sheltering animals in their burrows

The most beautiful and emptiest state parks in New England

Congress has approved $9.5 billion for US national parks

US extends travel restrictions with Canada and Mexico until August 21