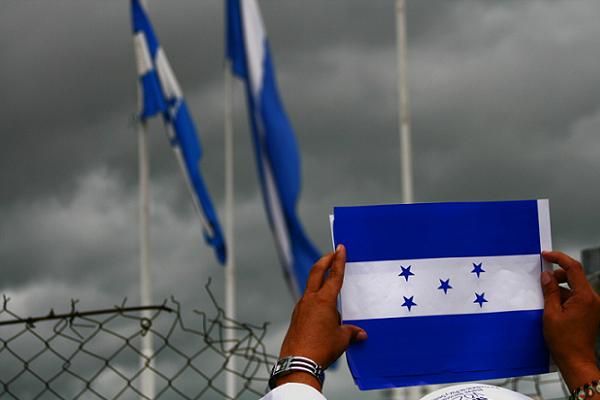 Venezuelan plane and crew attempt to land at Tegucigalpa’s airport with President Zelaya aboard.

The government of Roberto Micheletti, installed after last weekend’s coup deposed President Zelaya, kept its promise: it would not let Zelaya return without a fight.

As I write this, a Venezuelan plane carrying President Zelaya is circling the airport in the Honduran capital of Tegucigalpa.

In what appears to be a highly coordinated effort by the Micheletti government, the military, and the air control employees, the plane bearing Zelaya is being prevented from landing. According to this report by CNN, “Civil Aviation Director Alfredo San Martin said in a radio address that the ousted leader’s flight would be barred from landing in Honduras and diverted to El Salvador.” According to the pilot of the plane, interviewed by Spanish language channel Telesur, the airport runway was blocked by strategically parked military vehicles to prevent landing.

A separate plane carrying other South American leaders, including Argentina’s president Cristina Fernandez de Kirchner, Ecuador’s president, Rafael Correa, Fernando Lugo of Paraguay, and the head of the Organization of American States had also been diverted, though the original plan was for these leaders to accompany Zelaya. UN General Assembly president, Miguel d’Escoto, was reportedly on the plane with Zelaya.

Though it seems that Zelaya will not be returning to Honduras today as he planned, the world’s governments and political organizations are strengthening sanctions against Honduras. On Saturday, the Organization of American States suspended Honduras–the only country other than Cuba to have its membership suspended or revoked–after Micheletti refused to reinstall Zelaya to the presidency.

Click here to see photos of protests in the Honduran capital taken the day after the coup.