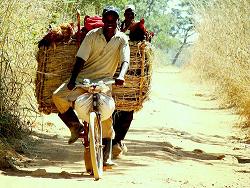 I’ve been known to criticize the incessant darkness and the emphasis on the catastrophic that characterizes a lot of modern journalism about Africa.

But I had never really stopped to think about how it feels to be one of those journalists, spending all your days writing about famine, AIDS, civil war, or genocide – until I read this interview with Bryan Mealer in World Hum.

After a three-year stint as a war reporter in the area, Mealer wrapped up his time in Central Africa by completing a 1,077-mile journey along the Congo River.

“For the first time, I was leaving eastern Congo without this heavy dread in my gut,” he says of his departure for the river trip.

I was just so sick of that shit. I covered the war for three years. That’s all I’ve ever covered when I worked for AP—that’s all there was time to do. I could’ve gone looking for more hopeful stories, but there just wasn’t time. So I needed to go out and find that little bit of reprieve… I said, “OK, I’m going to go out and travel on the river.” I didn’t want my legacy to that place to be just a bunch of stories about dead people.

Mealer’s book about the trip, ‘All Things Must Fight To Live,‘ came out last month. The entire interview is well worth reading.