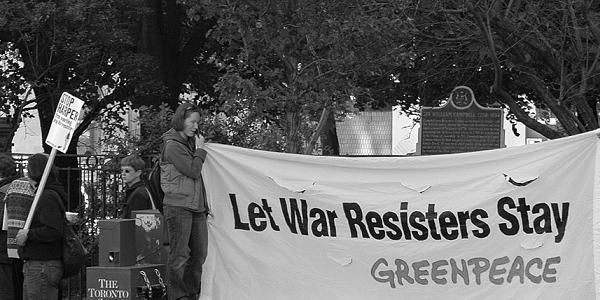 A protest in support of conscientious objectors, held in Toronto; Photo: picturenarrative

The stories of men who have crossed the US-Canada border as a statement against war are many, and they go back several decades. According to a recent article in Newsweek, about 50,000 men fled to Canada during the Vietnam War era in order to avoid the draft, many adjusting to life in their adopted country and settling there permanently.

Although the draft no longer exists in the United States, many war-weary soldiers who have done enough duty in Afghanistan and Iraq to question America’s motives for being there have returned from their deployments as conscientious objectors, refusing to accept redeployment orders. Many of them have crossed the border to seek asylum in Canada.

Increasingly, however, the Canadian government is taking active measures to deport these individuals back to the United States to face desertion charges. According to Newsweek, while three in five Canadians support the granting of permanent residency to conscientious objectors, the conservative government has been stepping up deportation activity since this time last year.

To learn more about the men and women who have served in the current wars and who now question America’s actions abroad, visit Iraq Veterans Against the War.