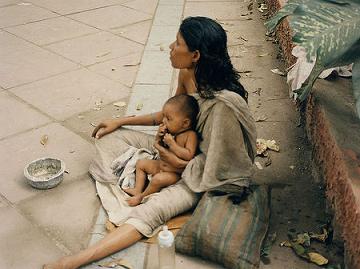 Every traveler has encountered the dilemma: To give or not to give when confronted by someone asking for money in the street or on public transport?

Though hard numbers are difficult to come by due to the varied definitions applied to beggars (are all people who are homeless beggars?), the mobility of beggars, and the fact that they are often overlooked in official censuses, governments and social service organizations estimate that the number of beggars around the world is increasing:

And as begging has increased, so have local government and law enforcement efforts to curb the practice. In Makassar, for instance, citizens are banned from giving money to beggars. China and France have considered moving beggars permanently (though not into shelters or social service programs that work on root issues of begging and related social problems).

More innovative programs have been implemented, including street collection boxes in Aberdeen, Scotland, though many end in failure.

Still, Mexico City thinks it’s come up with the solution for street begging and the moral discomfort it raises in the prospective giver. The program “El amor nos une,” or “Love will unite us,” lets those who are tired of or uncomfortable with cash donations give coupons instead. The coupons, which the recipient can redeem for food, can be purchased at grocery stores throughout the city. Similar programs exist in Colombia and are planned for Chile.

But is “Love will unite us” just another band-aid that covers up the real problems that perpetuate poverty and begging? What’s your opinion? What other anti-begging strategies have you come across in your travels?

Want to learn more about how you can deal with begging during your travels? Check out Michaela Lola’s article, “Ten Ways You Can Help Street Children Without Giving Money,” over at Brave New Traveler.