For those who worry about Latin America’s swing to the political left, there was one more country to start fretting about this weekend: El Salvador. 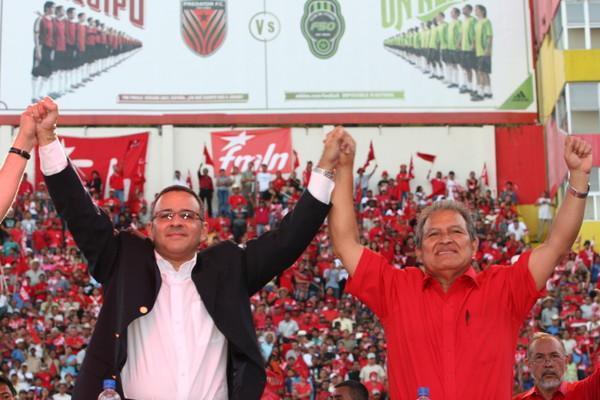 NACLA–North American Congress on Latin America–reported the following about the outcome of the country’s presidential election:

“The FMLN’s [Farabundo Martí National Liberation Front Party] Mauricio Funes declared victory at 9:30 [Sunday night]. His challenger from the incumbent, far-right ARENA party conceded defeat a few hours later, bringing an end to 20 years of one-party rule. Funes will become El Salvador’s first leftist head of state in the country’s history.The essence of Funes’ campaign slogan, ‘Hope is born,’ could be felt throughout the country yesterday, with massive voter turnout reported from the metropolis of San Salvador to rural villages in the outlying departments.”

Funes, an investigative journalist, ran for the presidency because he felt that he would only be able to help his country recover from years of conflict and unrest by exerting political authority. “The problems here are so powerful that I can’t continue working as a journalist,” Funes said in an interview with a Nicaraguan publication. “Journalism has allowed me to know the realities of El Salvador– especially the reality of poverty. But journalism doesn’t allow me to change that reality.”

Though the previous US presidential administration had expressed deep concern about the liberalization of Latin America, Funes and his party have articulated a set of 10 goals that seem to warrant hope, not worry:

1. Improve job prospects for the unemployed.
2. Explore and accelerate possibilities for responsible use of natural resources.
3. Combat organized crime.
4. Reduce the digital divide that exists between Salvadorans and the citizens of other countries.
5. Initiate an era of fiscal reform at the federal and regional government levels.
6. Respond to the global economic crisis and minimize effects on the country.
7. Unify divided communities.
8. Reaffirm the principles and values of democracy.
9. Restore legal standards to protect people seeking protection and justice.
10. Explore new opportunities for economic, social, and political alliances in Latin America.

Funes and the FMLN have their work cut out for them, for sure. But let’s hope that El Salvador can begin to enjoy some hope and change of their own.

Tagged
News Activism El Salvador
What did you think of this story?
Meh
Good
Awesome

Winners of the 2021 Ocean Photography Awards will make you see our oceans in a new light
Could virtual windows in airplane cabins be the future of aviation?
Which US airline is more likely to lose or damage your luggage?
Mesmerizing aerial images from the Drone Awards 2021
Rare footage shows a humpback whale nursing her calf in Hawaii

Everyone thinks El Salvador is dangerous. Here’s why I can’t wait to go back there

Here’s what happens when women are punished for having abortions