1961: Ingrid Betancourt is born in Bogota, Colombia. Her father, Gabriel Betancourt, was Colombia’s Minister of Education, assistant director of UNESCO, and UNESCO’s ambassador to France. Her mother, Yolanda Pulecio, was a Congresswoman who represented poor communities in Bogota.

1975: Betancourt’s parents divorce; her father receives custody and she and her sister, Astrid, are raised and educated in France. 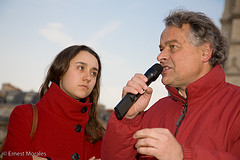 1989: Betancourt returns to Colombia when presidential candidate Luis Carlos Galan is assassinated. Betancourt and her husband divorce thereafter, as he is unwilling to relocate to Colombia. 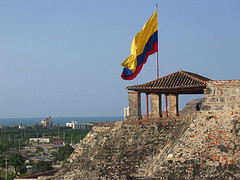 1990: Betancourt begins working at the Ministry of Finance in Colombia.

1994: Betancourt is elected to public office as a representative. She founds the Oxygen Green Party with the platform centered around combating corruption.

March 2001: Betancourt publishes her memoir, La rage au couer, in French. The book is a bestseller.

May 2001: Betancourt launches her presidential campaign. She begins a tour of the country to meet Colombians.

January 2002: Betancourt’s English-language memoir, Until Death do Us Part: My Struggle to Save Colombia is published. Betancourt’s presidential campaign and tour of Colombia continue.

February 23, 2002: Betancourt and her campaign manager, Clara Rojas, continue traversing Colombia in an effort to talk with all possible constituencies. She and Rojas are kidnapped at a FARC checkpoint. Rebels would later say they had no active plan to kidnap Betancourt, but that rebels had a standing order to “detain all politicians of national stature.”

2003: Rescue effort fails and FARC rebels kill 10 hostages upon hearing a helicopter approach. Families of Betancourt and other hostages become divided in their opinions about future rescue efforts.

December 2007: Betancourt writes a 12 page letter to her mother as “proof of life”; in letter, Betancourt expresses desperation and indicates she is losing her will to live. “Mamita,” she writes, “I am tired, tired of suffering…. Each day, less and less of myself remains.”
International efforts to rescue Betancourt and other hostages intensify. 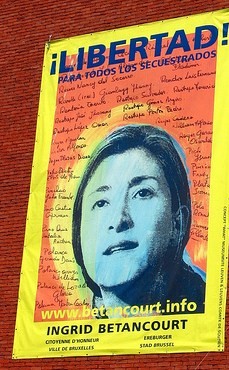 May 31, 2008: Surveillance and rescue planning begin for Operation Jaque, the code name for the hostage rescue. Though the effort is spearheaded by the Colombian government and military, the U.S. government is reported to provide air, surveillance, and technical support, and the support of the French and Venezuelan governments are also reported.

July 2008: Betancourt and fellow hostages released in a daring rescue operation. Betancourt reunites with her family and addresses the world. Betancourt reports that she plans to write a play about her hostage experience and is committed to continue serving Colombia… perhaps running again as president when current president Alvaro Uribe’s term expires in 2010.