Top Countries
Top CitiesView All Destinations
Trending Countries
Trending Cities
Load More
Maybe you don’t remember his name. But you certainly remember what he did. 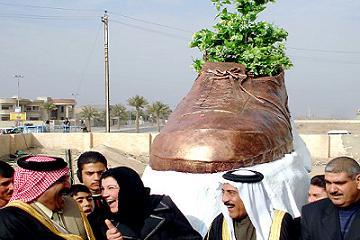 How about the Iraqi “shoe throw” journalist?

Well, al-Zaidi IS the journalist who famously threw his shoes at President Bush during a December 2008 press conference. He was subsequently arrested and sentenced to three years in prison.

Despite the long sentence, his total time was reduced to one year since he had no prior criminal record, and local authorities agreed he could be released three months early in recognition of his good behavior. He is scheduled to be released from a Baghdad prison tomorrow.

Though no one’s arguing that serving time is pleasant, al-Zaidi has been enjoying some unexpected benefits as the result of public support of his actions. In addition to continuing to receive his salary from the al-Baghdadiya news agency, al-Zaidi has allegedly been bought a house and has received multiple offers from parents who are eager to give their daughters’ hands to him in marriage. He (and his shoes) were also nominated as BBC’s Person of the Year.

Other promises–such as the Emir of Qatar’s pledge to buy al-Zaidi a golden horse–haven’t yet materialized.

No word yet on al-Zaidi’s post-prison plans, but his boss at al-Baghdadiya says he expects al-Zaidi to return to journalism.

Are you a member of the armed forces who has served in Iraq or Afghanistan? Join Matador Travel today and start sharing your stories with our community.