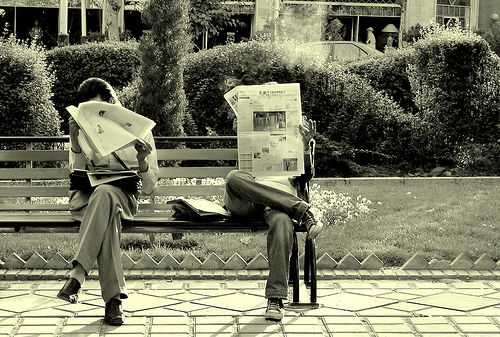 In breaking “is this the death of print?” news, the New York Times reports that the Tribune Company, the publisher of both the Los Angeles Times and the Chicago Tribune, has filed for bankruptcy.

I’m one of those traditionalist folks who can’t imagine life without newspapers and books (and no, a Kindle won’t do) and I generally assume that the frequently prophesied Death Of Print is greatly exaggerated.

But this is big news.

The serious financial strain that the newspaper industry is very clearly under these days could have (and indeed, may already be having) a major impact on the news that we receive daily.

As the Times story notes, many newspapers have been slashing jobs and paring down their newsrooms: eventually, this cost-cutting has to have an effect on the quality and quantity of the reporting of news from around the world.

Would a report on the terror attacks in Mumbai have the same power if it was filed from Los Angeles? Can someone in New York truly understand what’s happening in Zimbabwe?

But it’s also very important: in the same way that travel helps us to better understand our neighbours, real, on-the-ground reportage brings us closer to the heart of events in other countries.

Granted, blogging, Twitter, YouTube videos and other online tools of citizen reporting can help to fill the gap – but they’re not (at least, not yet) a complete substitute for a seasoned reporter with regional expertise.

The online community tends to have little sympathy for the mega-media empires that produce our daily newspaper and television news. We often view them as dated, irrelevant, “dead tree” publishers that lack the up-to-the-nanosecond speed of the web.

But they still play a vital role in the global dissemination of news. Without them, we risk losing some of our connection with the outside world.

[Via Kim Mance of Galavanting]

Loop from Boston to California and back on the ultimate US train trip When we travel again, don’t all rush to the first place that will take you 17 things you didn’t know about the Cook Islands The days of US passport dominance may be over What the changing laws in Hong Kong mean for travelers