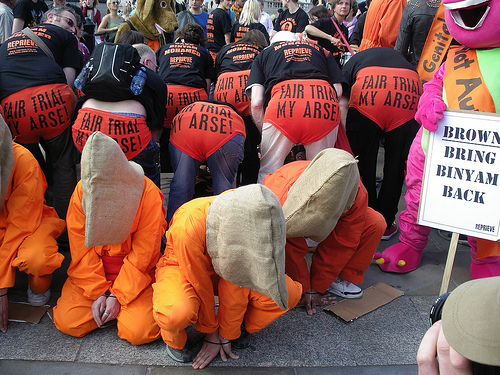 A US pre-trial hearing for a Canadian child soldier (sorry, make that child “enemy combatant”) who’s been held in Guantanamo for six years will go ahead after all — just one day before Barack Obama becomes President.

Omar Khadr is currently scheduled to appear in one of Guantanamo’s much-maligned military commissions on January 19 (Martin Luther King Day, for those keeping track), the day before Obama — who has pledged to close the prison camp at Gitmo — takes office.

It shows desperation and you can almost interpret it as a thumb in the eye of the incoming Obama camp.

Khadr was just 15 years old when he was captured after a firefight in Afghanistan, and has been imprisoned ever since, waiting to face charges of “war crimes” and “murder”, based on allegations that he threw a hand grenade (in said firefight) that killed a US soldier.

(Incidentally, the soldiers that captured Khadr initially found him unarmed and wounded, and shot him in the back. They only took him into custody when he survived the bullets — but they have yet to face charges of attempted murder. In fact, they’ll be among the chief witnesses for the prosecution.)

Why are child soldiers from Sierra Leone or Uganda viewed as victims, but Omar Khadr is instead treated as a war criminal?

The Khadr family is extremely controversial up here in Canada.

Omar’s father (who was killed in Afghanistan) was a well-known fundraiser for Al Qaeda, said to know Osama Bin Laden personally, while the mother has frequently been in the news in recent years, complaining about the Canadian government’s inadequacies while publicly supporting Al Qaeda and the Taliban.

But all of that — far from making me believe Omar is getting what he deserves, as some do — only makes me feel the injustice of his case more strongly.

This is a boy who was sent to Afghanistan by his parents for terrorist training before he’d hit puberty — truly a case of child abuse if ever I’ve heard one.

And yet, instead of trying to protect or rehabilitate him (and even the staff at Gitmo believe he is a perfect candidate for rehab), the Canadian and US governments have responded by stripping him of his rights, torturing him, and putting him on trial for “murder”, a bizarre charge to level at someone in a war zone where (as his captors made clear when they tried to finish him off) it was kill or be killed.

Why are child soldiers from Sierra Leone or Uganda viewed as victims, but Omar Khadr is instead treated as a war criminal?

And why are US prosecutors so intent on seeing his case through, even as a new President arrives who’s made it clear he wants no part of the mockery made of justice in the last 8 years?

The answers to both questions are the same: as with Abu Ghraib, third-party rendition, and everything else, too many high-level US administrators have become so intent on “winning” the War on Terror, that they’ve lost all sight of what they are supposed to be fighting to protect.

Unfortunately for Omar Khadr, it may come one day too late.