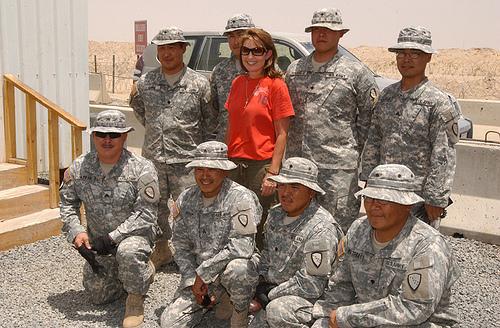 Sure, the Matador editors have been a little bit obsessed with Sarah Palin over the past couple of days.

We’ve poked fun at Palin’s patriotism (she took things WAY further than a lapel pin; how’d you like that American flag bikini and the confident trigger finger?).

We wondered aloud how she could permit oil drilling in her state.

But we’re not done yet.

Governor Palin, could you please show us your passport?

According to a New York Times article published earlier this week, Palin has only held a passport since the middle of last year.

Her reason for applying? She needed a passport in order to visit troops in Kuwait.

Blogosphere speculation abounds, of course, as to whether there’s any other ink in her passport, but as one Salon.com blogger noted, Palin can’t “compete with…Biden…who has been to every war zone in recent memory and logged plenty of time in every time zone relevant to our national interest.”

While some bloggers argue that her lack of a passport makes her MORE likeable (this from a guy whose screen name is “strung out”), Matador editors and passionate travelers know that travel is, in fact, an important veep credential.

And Palin doesn’t have it.