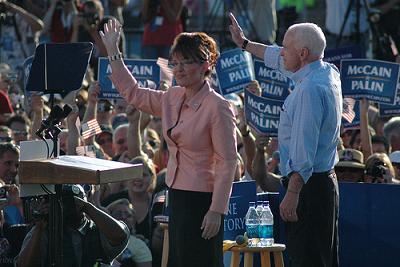 Shortly after candidate John McCain announced that his running mate would be someone most Americans had never heard of, I wrote a brief article about the fact VP pick Palin didn’t have a passport–ever–until 2007.

Thankfully, I wasn’t the only person in America who wondered why Palin waited until she was 43 years old to get a passport.

The nagging thought occurred to Katie Couric, too, and Couric got to Palin before I did (she isn’t scheduling a whole lot of interviews, you know).

Couric: “a lot of our viewers … and Internet users wanted to know why you did not get a passport until last year. And they wondered if that indicated a lack of interest and curiosity in the world.”

Palin: “I’m not one of those who maybe came from a background of, you know, kids who perhaps graduate college and their parents give them a passport and give them a backpack and say go off and travel the world. No, I’ve worked all my life. In fact, I usually had two jobs all my life until I had kids. I was not a part of, I guess, that culture. The way that I have understood the world is through education, through books, through mediums that have provided me a lot of perspective on the world.”

Palin’s response is offensive because it assumes, falsely in my opinion, that:

1. Travel is only for members of the upper class.

2. The only purpose of travel is leisure… travelers are part of some “culture” that’s separate from the mainstream.

3. A parent can’t travel… and definitely can’t take their kids along for the ride.

4. The only way to become educated about the world is through a book (or some “medium” that provides “a lot of perspective”).

All of which Matador members are proving wrong every day.

Take, for example, Matador editor Tim Patterson’s article “How to Travel the World for Free”. Or Rigo Lara’s moving article, “Changed Forever,” an account of his experience of traveling abroad for the first time.

Read blogs by Matador dads David Miller and Jacob Bielanski. Or visit Matador member MST’s blog, Big Sweet Tooth, to see what a non college educated woman can learn about the world… and what she can do with what she learns.

I wasn’t the only person who thought this was one of Palin’s biggest “Doh!” moments.

Yeah – because it happens just like that for everyone. Every backpacker you find today had parents that handed them a passport, gear and ticket abroad by as soon as they got out of college (with no debt and never having had to balance work and courses, for sure). That’s how backpackers get to travel…. right?

What do YOU think about Palin’s passport delay excuse? Share your comments below!

39 of the most breathtaking natural wonders in the world
This new, glass-domed train will take you on an epic journey through the Rocky Mountains
A time capsule from the north pole just washed up in Ireland
The truth about artificial vanilla extract (and why you should always splurge for pure)
30 awesome Japanese idioms we should start using in English