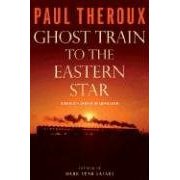 Would it be too dramatic if I said that ‘Ghost Train to the Eastern Star‘ is the most anticipated travel book of the year?

Maybe. But for me at least, dramatic or not, it’s certainly true.

It’s been nearly 35 years since Theroux’s travel classic, ‘The Great Railway Bazaar‘, was first released – and in those years, I can’t be the only reader to have been electrified by those famous opening lines:

In the intervening years, Paul Theroux has covered plenty of other ground, in well-loved books like ‘The Old Patagonian Express‘ and ‘Dark Star Safari‘. But now, with ‘Ghost Train’, he re-traces his steps on that first, famous journey.

I haven’t gotten my hands on the book yet, but this Q&A, courtesy of World Hum, is a great appetite-whetter.

7 vintage train rides in the US that will take you where no cars can go
Soon, your ID might not get you through airport security
Every destination in the world currently open to US tourists
The 9 best travel rewards credit cards in 2021
On your visit to Orlando, you should actually stay (and eat) in Kissimmee