Ten years ago Rolf Potts stormed onto the travel writing scene as a wandering columnist for Salon.com.

Since then, he’s been published in the travel world’s most respected publications, racked up awards and appearances in the annual Best American Travel Writing anthologies, and produced a book – Vagabonding: An Uncommon Guide to The Art of Long-Term World Travel – that has inspired countless readers to make more time for travel.

Now, Rolf’s second book, Marco Polo Didn’t Go There: Stories and Revelations From One Decade as a Postmodern Travel Writer, has just been released.

To celebrate, he’s put together a virtual book tour (alongside a physical one), and today’s tour stop is none other than Matador Pulse!

We’re thrilled to have Rolf Potts here to talk about being a travel writer vs. just being a writer, some adventures that haven’t made it to publication yet, and his plans for the future. 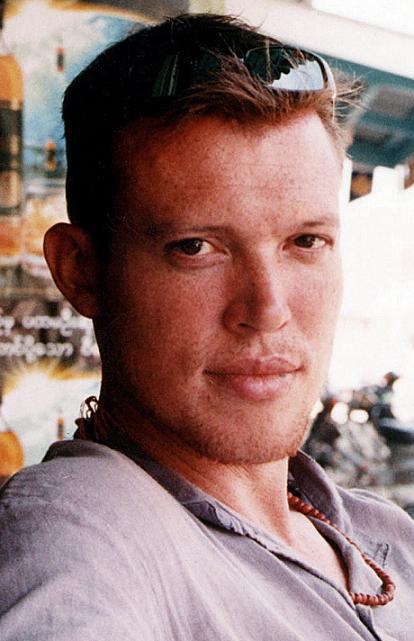 Some, like Chuck Thompson, paint a pretty grim picture of the industry. Others – Paul Theroux for instance – emphasize that they are simply writers, not “travel writers.”

What about you? Any urge to dissociate yourself from the “travel writer” label any time soon?

Rolf Potts: Travel writing is definitely not the “dream job” fantasy that so many people envision it to be. I touch on this a bit in my new book — particularly in the endnotes — and for years I’ve been trying to promote a more practical and realistic view of the genre through the “Writers” section of my website, which includes Q&As with nearly 100 working travel writers.

As for me, I sometimes call myself a travel writer, and other times just a writer, since I write on non-travel topics for outlets like The Believer and the New York Times Magazine. I’m sure Theroux calls himself a “writer” for the same reason, and in this way it’s more a matter of descriptive accuracy than distaste for the genre.

I find no embarrassment at the term “travel writer,” but some established writers feel the genre is too closely associated with subsidized “press trips” and brainless destination writing. This is not a new sentiment.

As Jason Wilson noted in a 2000 Salon article called “Trip Lit,” travel writing has been regarded as a lesser genre going back to the 19th century, when writers like Herman Melville and Nathaniel Hawthorne wrote travel books less as a serious literary pursuit than an easy way to augment their income.

As you mentioned in your World Hum Q&A last week, there are two sides to travel writing: the more artistic, literary stories, and the consumer pieces.

I think most new writers aspire to end up on the literary side of things eventually – but realistically, the consumer content is much easier to a) produce and b) sell.

I know you plunged right into essay writing back in your Salon days and have hardly looked back, but for the rest of us, any thoughts on bridging that divide?

Is it a matter of choosing one or the other, or is there a way to strike a balance between selling Top 5 lists for a living and cultivating our inner essayists?

I don’t think you have to choose one or the other. Even though I was publishing literary essays early in my career, I’ve still done a fair amount of consumer writing over the years. Since consumer writing pays comparatively well, I regard service items and destination articles as a kind of “day job” that helps support my more serious writing.

I intentionally included one of these consumer articles (a story about Grenada) in my new book so I could use the chapter endnotes to comment on the limitations of pre-assigned destination stories, the ethical challenges of press-trips, and the idiosyncrasies of working with photographers.

So for those who are just starting out, I’d recommend developing your literary chops even as you research and sell consumer articles. Researching superficial service articles needn’t compromise your ability to write about richer human themes someday down the line. 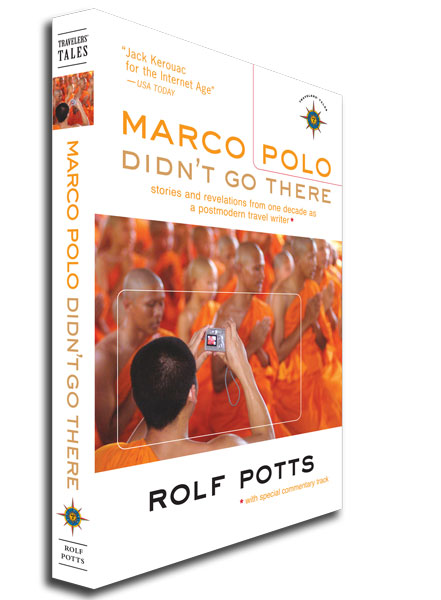 Marco Polo Didn’t Go There has an unusual feature: a commentary track accompanying the essays, that reveals “the ragged edges behind the experience and creation of each tale.”

I was impressed by the self-awareness you must have when you write, to have been able to produce that commentary.

Do you think that being conscious of your artistic decisions when writing – as opposed to just letting it flow – is an important part of good story construction?

Would you advise new writers to strive for that sort of awareness?

All the chapter endnotes were written well after the essays themselves, which means none of the stories were written with a “commentary track” in mind. I reassembled the endnote information retrospectively, using spare notes and memories of the experiences in question.

It’s interesting that you mention “letting it flow,” since it’s never that simple for me. Even when my writing is flowing, it’s doing so in the context of a deliberately structured narrative. Beginning writers sometimes forget about the importance of structure — I know I did when I was starting out.

George Orwell admitted that his most effortless-sounding prose was actually the result of painstaking effort. This applies to many writers, including me — and the passages of mine that seem to flow down the page didn’t necessarily flow that way onto the page.

In this new book, and in your whole body of work, readers get an up-close look at your travel highs and lows, personal moments and misadventures. But I’m wondering about the stories that never got written.

Have you had any especially memorable travel experiences that you’ve tried to write about – and been unable to do so?

Yes, definitely. I’ve been going to Latin America every winter for the past three years — largely in an attempt to learn how to dance — and I am currently at a loss for how to write about this increasingly quixotic endeavor.

Eight years ago I walked across Israel just a few weeks before the latest intifada — and I’m still trying to figure out ways to make this bucolic stroll sound relevant in the context of a post-9/11 world. The next year I rode a bicycle down Burma’s Irrawaddy valley, and to date I’ve only published snippets of that experience.

I’m just optimistic enough to think I’ll find a way to get all these adventures down on paper someday. Chapter 11 of my new book, which describes my attempt to track down a friend in Thailand who may or may not have been dead, was written in this way: For years I was too close to the experience emotionally, so I didn’t make it into a story until four years after it happened.

Finally, I know you’ve just wrapped up this book – and have a North American tour coming up – but looking ahead, are there any more large-scale projects on the horizon?

There are lots of possibilities, though I have yet to settle on a single one. I have an idea for a travel book set in North America, as well as a memoir set in the 1990s. I’ve been exploring some documentary television opportunities as well. And one of these days I should probably get back down the South America and learn how to dance properly.

But right now I’m just looking forward to coming back to Kansas in December and unwinding for a few weeks. I’ve literally been on the go since May, and the pace of all my recent projects has been more urgent and micromanaged than I’d prefer. So my first big task will be to rest on the prairie for a while, read my way through a stack of books, spend the holidays with my family, and try to figure out my next big journey.

We’ll look forward to reading about it. Thanks, Rolf!

You can follow the rest of Rolf Potts’ virtual book tour online, or see him in person at one of 20 cities nationwide as he celebrates the release of Marco Polo Didn’t Go There (Travelers’ Tales, 2008).  We encourage you to ask for the book at your favorite local bookstore or Amazon.com, and follow Rolf’s tour diary at Gadling starting Sept 29th.  Tomorrow’s virtual book tour stop will be at Brave New Traveler. To read Friday’s tour stop, go to The Lost Girls.