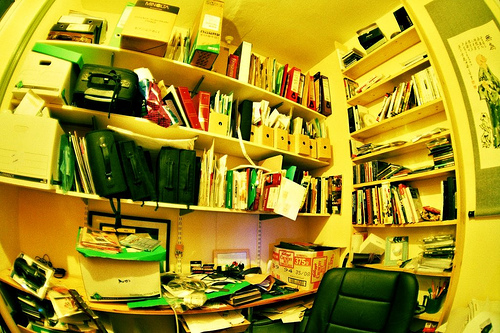 BEFORE YOU ASK: yes, I’ve already grasped the irony of raising this subject on a blog.

Anyway, irony aside, I’ve been noticing different threads of a similar conversation in several articles around the web, and they all boil down to this question: Can a writer blog, tweet, digg, vlog, tumbl, and whatever else – and still get down to the actual business of writing, too, with the same effectiveness?

We all know social media can be a great networking tool: it helps us make contacts, collaborate with other writers, set up meetings, and even land gigs.

But what about the impact of the ever-growing social media in our lives on the purely literary side of our efforts?

Over at the Poetry Foundation’s online journal, Adam Kirsch writes:

The Internet has democratized the means of self-expression, but it has not democratized the rewards of self-expression. Now everyone can assert a claim to recognition—in a blog, Tumblog, Facebook status update. But the amount of recognition available in the world is inexorably shrinking, since each passing generation leaves behind more writers with a claim on our memory. That is why the fight for recognition is so fierce and so personal…

If that is the case, then the best strategy for writers in the age of the Internet may be to ignore the Internet and look down on it. If print is a luxury, make it a rare and exclusive one; if literature is antidemocratic, revel in its injustice. Make sure that the reward of recognition goes to the most beautiful and difficult writing, not to the loudest and neediest.

Responding to Kirsch on the VQR blog, Jacob Silverman agrees:

I would recommend that writers avoid the internet (for few can skip over it entirely, except for someone living off the grid like Carolyn Chute or a member of the established old guard, perhaps no better personified than in the quasi-prophetic voice of Cormac McCarthy, calling from a mountaintop) not because by immersing themselves in the Web they meet their critics on their own ground, becoming caught in the same muck they ostensibly hold themselves above, but because more than anything, such activities are simply a waste of time….

[B]efore one works one’s way out, how many hours are wasted? How much stress and emotional concern and how many thousands of words devoted to, say, a litblog vs. lit mag showdown that concerns no one beyond the immediate participants and their friends?

In a separate thread at Poets & Writers, Frank Bures has also been pondering the impact of all this digital communication on writing.

“As a writer, I have always strived to carve out this place where I can think my own thoughts, where I can let all that’s rolling around in my mind congeal into something (hopefully) new and interesting,” Bures writes.

But if that was difficult to do two decades ago… it’s a million times more difficult now. Today, it seems that we have access to an unlimited amount of information all the time, and for those of us who want to be alone with our thoughts, that information is getting harder and harder to avoid.

…What does all this mean for writers? It means that from the comfort of our own chairs we can research the hell out of whatever we’re writing, while keeping up on the latest celebrity scandals, political polls, and the flood of e-mail. But a growing body of research shows that we pay a price for this constant stream of information.

And that price, according to Bures and some of the writers he interviewed (including a favourite travel writer of mine, Tom Bissell)?

Obviously I’m hardly anti-blog (please see above-noted irony) but I do think there’s something to all this. If I’m working on a longer piece – a personal essay, say – I always close my email, all my browser windows, sometimes I even unplug the high speed entirely.

I only do that rarely, though, under special circumstances. The rest of the time I bounce between Word, Google Docs, Twitter, email, and an assortment of blogging platforms.

Does my writing suffer as a result? Does yours?