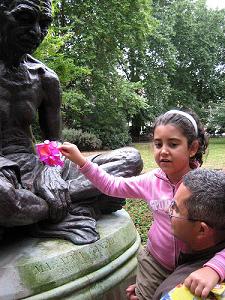 The auction, set for today at Manhattan’s Antiquorum auction house, is described simply as a collection of “important collectors’ wristwatches, pocket watches, and clocks.”

But lot #364 is REALLY important… and it’s causing quite a bit of interest and competition even outside the rarefied world of auctions.

Collector and peace activist James Otis submitted lot #364 for auction, and here’s what it includes: Mahatma Gandhi’s pocket watch, a pair of leather sandals, a bowl and plate used by Gandhi, Gandhi’s glasses, images of Gandhi, and letters of authenticity from Ghita Mehta, Talatsahid Khan Babi, and Professor Lester Kurtz.

The bids are expected to start between $20,000 and $30,000 US dollars. Otis has publicly said that he’ll use the proceeds to educate people about Gandhi’s philosophy of non-violence, especially in developing countries.

But the government of India is none too happy about Otis’s plan.

Upon learning that Otis had submitted this lot of items for auction, India, which considers the items to be part of the country’s cultural patrimony, demanded that they be returned to India immediately.

Otis, however, declined to do so. Instead, he went to the Indian Consulate General in New York, where he collaborated on drafting a compromise with the Indian government.

The terms? I’ll give you back Gandhi’s goods (which Otis acquired legally) if you agree to increase spending on the poor from the current 1% of the GDP to 5%. He also proposed that the Indian government sponsor a world tour of the items to promote knowledge about Gandhi. The Indian government rejected Otis’s proposal.

But Otis–and the world’s poor–may end up getting the best deal of all.

In an article run earlier today by the Associated Press and published in the Chicago Tribune, India’s culture minister, Ambika Soni confirmed that Prime Minister Manmohan Singh has given her strict instructions to not allow any bidder at today’s auction outbid her. “[We will] offer whatever it takes,” Soni said, “to make sure these things come back to Gandhi’s motherland.”

The bidding may get fierce at this afternoon’s auction, but one thing seems certain: with India determined to acquire lot #364 at any price, Otis may well be able to bankroll an impressive anti-poverty campaign… thanks to the country that tried to resist just that.

Get paid $20,000 to drink beer and hike the Appalachian Trail Japan will partially pay for domestic travel so you can explore more of the country The winners of the International Photography Awards revealed, and they’re stunning Stonehenge will livestream its summer solstice celebration for the first time ever You can finally take a virtual tour of the rarely photographed Studio Ghibli Museum in Japan