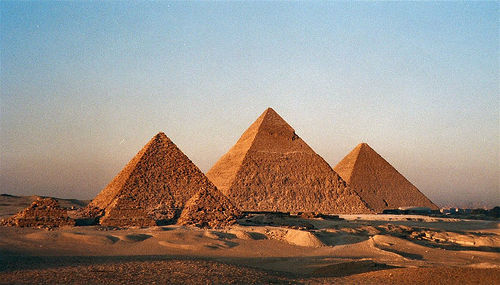 There have been a couple of pretty exciting archaeological discoveries worth noting in recent days:

First up, a new pyramid has been discovered in Egypt. (Well, not new. Hella old, actually. But new to us. You know what I mean…) The structure is estimated to be 4,300 years old.

It’s been worn down to its foundation, so tourists won’t be posing for dramatic photos with it anytime soon. Still, it’s a significant find, coming in an area near Memphis that has yet to be fully explored.

From the CNN story:

[Egyptian antiquities chief] Hawass’ team has been excavating at the location for two years, but he said it was only two months ago when they determined the structure, with sides about 72 feet (22 meters) long, was the base of a pyramid. They also found parts of the pyramid’s white limestone casing — believed to have once covered the entire structure — which enabled them to calculate that the complete pyramid was once 45 feet (14 meters) high.

The pyramid is the 118th discovered so far in Egypt. “To find a new pyramid is always exciting,” said Hawass. “And this one is magical. It belonged to a queen.”

Meanwhile, in Bulgaria, a 1,300 year-old bronze-covered chariot has been discovered, in what’s believed to be a Thracian aristocrat’s burial mound.

It’s just the second complete chariot to be unearthed in the area – and that’s where this story turns a little grim.

An archaeologist interviewed for the story noted that his and other teams can’t keep up with better-equipped, better-funded teams of looters in Bulgaria, who make the finds first and sell their findings on the black market.

According to the AP:

Some 10,000 Thracian mounds — part of them covering monumental stone tombs — are scattered across the country.

…[But] up to 90 percent of the tombs in the region have been completely or partially destroyed by treasure hunters who smuggle the most precious objects abroad.

It’s a sobering reminder that no matter how many discoveries are made, there are thousands more pieces of that historical jigsaw puzzle that we may never be able to retrieve.

The best island in the Caribbean for every type of traveler
These destinations are opening to US tourists this summer
Can we trust negative COVID-19 tests as a green light for travel? We asked a travel doctor.
7 disputed territories that only tenacious travelers can visit
Loop from Boston to California and back on the ultimate US train trip