Getting these shots and followers sometimes ain’t that glamorous! Some shots take forever to get, some are accidents, some are planned, and most are heavily edited. And most of these shots also got me a lot of weird stares while I was taking them. Here’s a bit of backstory: 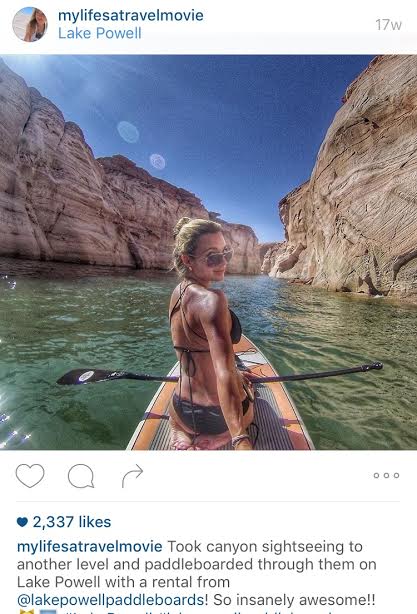 Don’t let that smile fool you, I was pretty much a zombie after not sleeping because I decided to camp alone on a deserted island the night before, but I needed a shot of the paddle board for a blog post I was doing. I’m sitting because I have a gash on the bottom of my foot, and because I couldn’t balance to take the picture, and was terrified of falling in. Notice how you can’t see my left arm? I was using it to (carefully) hold my iPhone to see a preview of the shot with my GoPro. 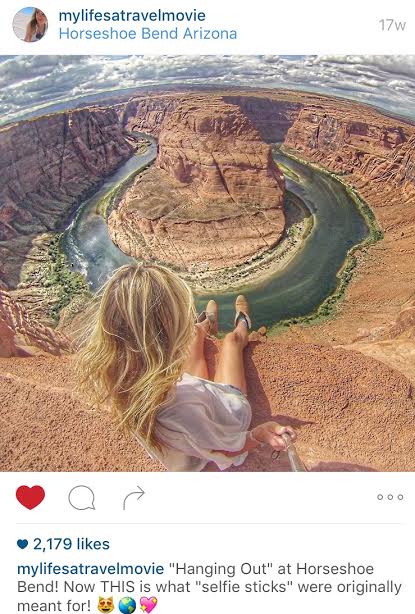 I specifically went to Horseshoe Bend because I really, really wanted this shot. Again, notice how you don’t see my left arm, and I’m looking down; it’s because I can see the preview of the GoPro shot on my phone, which I was purposely angling so you couldn’t see the dozens of tourists staring at me like I was crazy for hanging my feet over the edge to take a “selfie”. To be fair, I was slightly terrified, and I did fit in with all of the tourists using selfie sticks for their phones. My travel companion was slowly starting to hate me for taking photos instead of “enjoying the moment”. 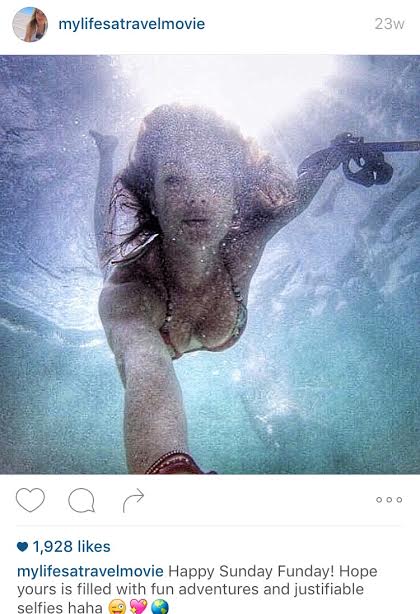 This picture actually was a really awesome moment for me. It was not only one of my first solo trips, but also the first time I realized I could see underwater because I had just gotten Lasik. But, I still did not mean to get such an awesome shot. I had my GoPro on a timer and happened to get this one out of like 30 really weird ones of me looking like a drowning cat. It was actually cloudy and raining so I also had to edit the shit out of this just so you can see me.

4. Top of Angel’s Landing in Zion 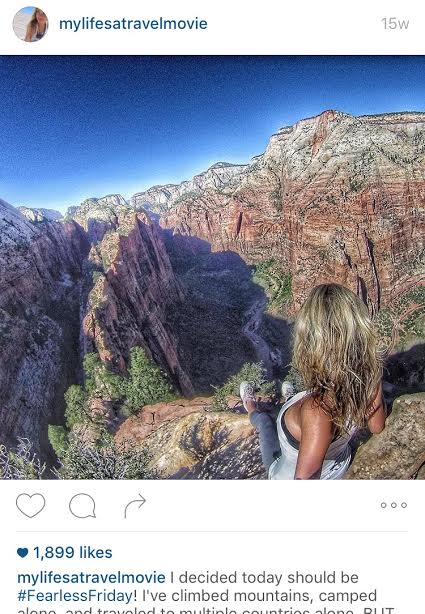 Angel’s Landing is the highest/hardest hike in Zion National Park…guess who didn’t know that until they were half way into the hike? I was not prepared at all. Also guess who had never climbed a freaking mountain using mounted chains and ropes? This girl. That being said, you can probably imagine why my hair (which I only took down out of a bun for the pic) is wet. I also waited about 10 minutes for a guy to hike down so he wouldn’t judge me for using a selfie stick. On a cooler note, two girls stopped me at the top because they follow me on Instagram! #humblebrag. 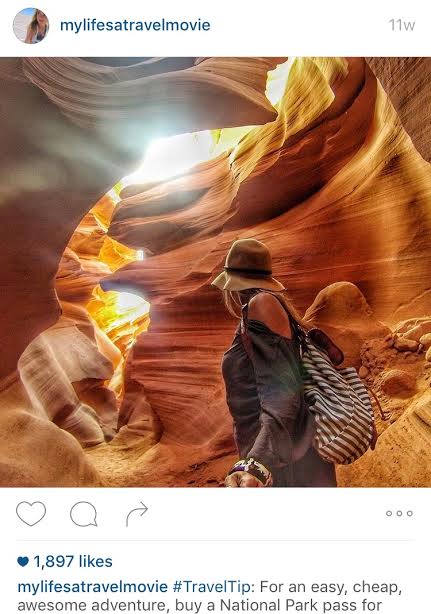 I had been dying to get shots of Antelope Valley, but apparently so were a lot of people, because both tours I attended were full of people. The guide made fun of me every time I’d take a picture, making me look like a self-absorbed princess to the others, so I had to lag behind or run ahead to get shots when no one was around. Everyone kept asking if I wanted them to just take my picture, but it’s hard to explain that I don’t actually want a photo of myself, but I have a specific angle and shot that I like, and have to be in the photo to a certain extent otherwise it won’t do as well on Instagram. I also changed outfits in the car to differentiate between Upper and Lower Antelope Canyon. 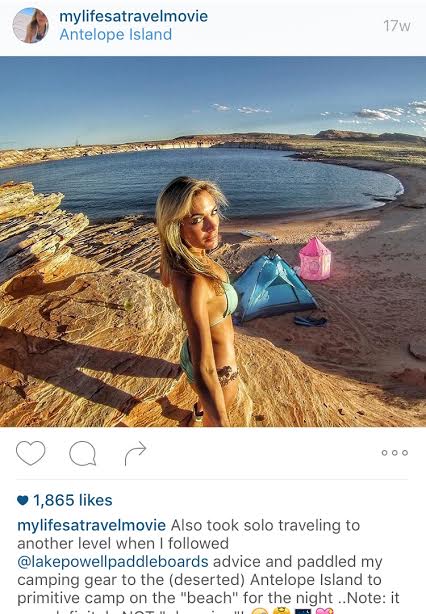 There’s a lot going on here. First of all, I paddle boarded all of my camping gear to a deserted island in Arizona because the guy at the paddle board shop said it would be “a great adventure”, and since I was pissed that the dude I was dating had just crashed my road trip then left, I figured, “f*ck it, why the hell not”. That “glow” on my skin is from the hour it took me to get the stupid blue two-person tent up by myself, and the pink princess tent was brought specifically for my amusement and photos. Yes, that is a knife in my bikini, yes, my left arm is again holding my phone with a preview of shot, and yes, I was scared shitless the second it got dark outside. 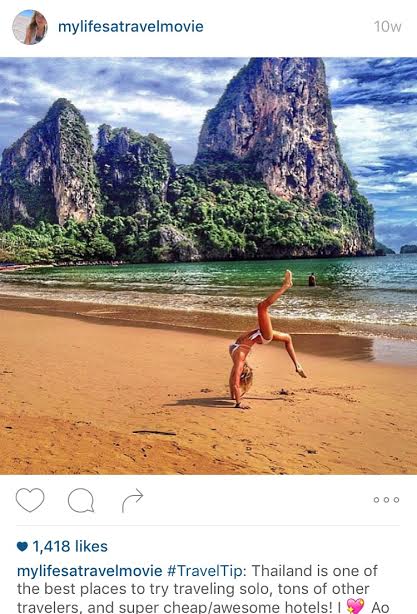 This is the product of an attempted handstand-shot on Railay Beach in Thailand. I have my GoPro on a timer, and have the stick shoved in the sand and propped up by beer bottles. That being said, I was also drinking, and extremely rusty on my gymnastics skills, so couldn’t keep my legs straight up for the life of me. I believe my mother even said, “Wow, I had no idea you could even still do that!” Also, like usual, I was extremely sunburnt. A few days later I got my debit and credit card stolen, had to fly Malaysia Airlines (it was empty), and still had a week left traveling sunburnt and solo in Australia. 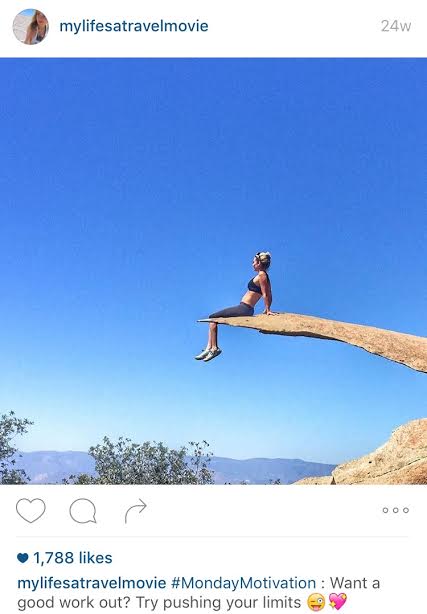 Here’s another specific location I really wanted to go to to get a cool picture as I knew it would do well on Instagram, and only an hour or so from where I live. I didn’t exactly look too much into it besides the drive. I got stuck doing a steep incline hike in the blazing California sun, only to get to this potato chip looking rock that only looks impressive in photos. Sorry for the spoiler alert, but everyone who sees it for the first time goes, “that’s it?!” 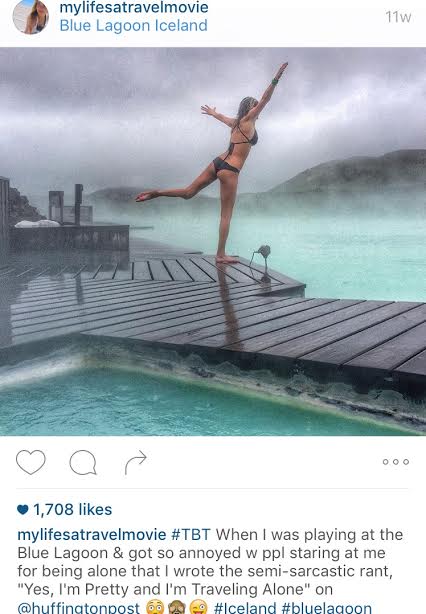 The moments before this photo it was filled with tourists, gawking at me for being there alone and thus influencing me to write my lovely little rant, “Yes, I’m Pretty and I’m Traveling Alone.” Luckily one of the gawkers was also a worker, who let me stay back as everyone was exiting. While he took my picture, and I froze my ass off.

I’m a Professional Road Tripper. Here’s What I Never Leave Home Without.
The Ultimate Food Tour of New Haven, the Birthplace of American Pizza
Skip Marfa for These True Small Town Texas Experiences
This Historic Castle Distillery Is the Best Place To Drink in Kentucky Bourbon Country
The Truth About Artificial Vanilla Extract (and Why You Should Always Splurge for Pure)