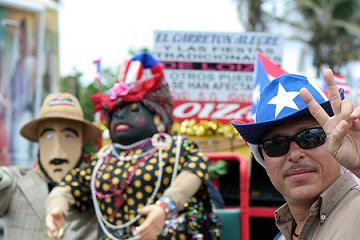 The status of Puerto Rico is one of the most complicated, confusing, and fascinating political arrangements in the world.

Puerto Rico, formerly a Spanish colony, was ceded to the United States in 1898 as a consequence of the Spanish American War. For several decades afterward, the status and identity of the island were in limbo as the United States and islanders attempted to arrive at a viable political arrangement that would satisfy the interests of both parties.

The result was a strange compromise in which Puerto Rico became a commonwealth, or “free associated state,” of the US. The status granted some–but not all–of the benefits of US citizenship and left many Puerto Ricans wondering what, exactly, being a commonwealth meant.

It’s an issue that remains the focal point of politics on the island, with referenda being held every few years to determine what islanders want their status to be. There are those who favor statehood, others who favor complete independence, and still others who would be content to let the commonwealth continue as is.

Yesterday, the Associated Press reported that the US House of Representatives approved the island’s proposal to allow Puerto Ricans to hold a new referendum to vote on the island’s political future. Under the proposal, titled the Puerto Rico Democracy Act of 2009,

“[v]oters would choose between keeping the island’s commonwealth status, adopted in 1952, or to opt for something different. In the latter case, a second plebiscite would let them decide whether they wanted statehood, independence or independence with a loose association to the United States.”

Though no date has been scheduled for a vote, anxiety about the potential referendum is already high. The last referendum was held in 1998.