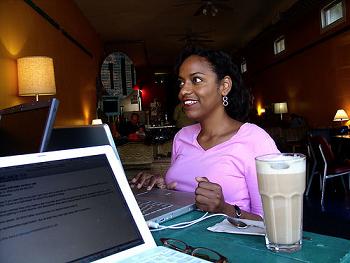 A recent opinion poll conducted by the BBC indicated that “people in 22 countries would prefer Obama as president by a margin of 4 to 1 over Republican rival John McCain.”

We decided to reach out to 50 bloggers around the world and ask: Where do you live? Are you following the elections? Who would you prefer to win? What is the importance of this election for your country?

This article is the first installment in a series leading up to the election in which bloggers abroad share their opinions:

Francis Wade of Kingston, Jamaica: “I am following the elections. I’m for Obama! [The election is] critical. The outcome affects the entire world and the way the US is perceived. Bush has done much to ruin that country’s leadership role in the world, most notably by invading Iraq for no good reason.

The Republicans are very unpopular in Jamaica as a result, and connect easily with Obama’s view of the world.”

Juan Arellano Valdivia of Peru: Juan is following the elections and says he’d vote for Obama “without a doubt.” While he doesn’t think that the Peruvian economy would be profoundly affected by a McCain or Obama win because of the existing free trade agreement between the two countries, he does think that immigrants are likely to be affected negatively if McCain wins.

Rodrigo Ergueta of Bolivia: Though he abstains from sharing his opinion about who he’d vote for, Rodrigo is following the race closely and says he believes that Obama has a clear advantage over McCain because of the “constant loss of support that Republicans have been experiencing recently due to the deteriorating economy.”

What concerns him in the event of a McCain or Obama win is whether the next US president will attempt to maintain and improve bilateral relations between the US and Bolivia, particularly considering the recent expulsion of the US Ambassador from the country by the Bolivian President, Evo Morales.

Guillermo, an Argentinean expat living in Canada, says he “sincerely wishes” he didn’t care about the US elections, but finds it hard not to follow them. He wouldn’t vote for Obama OR McCain, but thinks if McCain-Palin win, they’ll make Bush “look like an innocent baby compared to them!”

Gabriela Garcia Calderon Orbe of Peru predicts McCain will win, but says she’d vote for Obama, because she believes he’s capable of bringing needed change to the White House.

Obama can chalk up another vote: Carolina Botero of Colombia says she’s in his corner, and hopes that his win would dilute some of the neoliberal policies her country’s government has adopted in recent years in conjunction with US economic and military support.

Moving across the pond, Nicholas Starling of Norfolk, England writes that he’s also an Obama supporter. Why? Because “It’s time for America to have a real change… and to regain its position as a friend of freedom and a beacon of hope. Another Republican and a creationist VP who thinks that being able to see Russia from an Alaskan island means she has foreign affairs experience is not the answer.”

Where are YOU from? And what do you think about the elections? Do you agree with the Matador editors’ endorsement of Obama? Share your policial opinions below!