No matter where you travel in the world, visiting ancient ruins is often one of the most memorable parts of the experience. There’s something transcendent about glimpsing a place that was once filled with people probably a lot like you, with their own plans and worries, but living millennia ago. In winter, seeing some of the world’s most magnificent ancient structures is even more dazzling. Snowfall and fewer crowds present them in an entirely different hue. Grab your parka and your snow boots because these famous historical sites are stunning with a dash of snow. 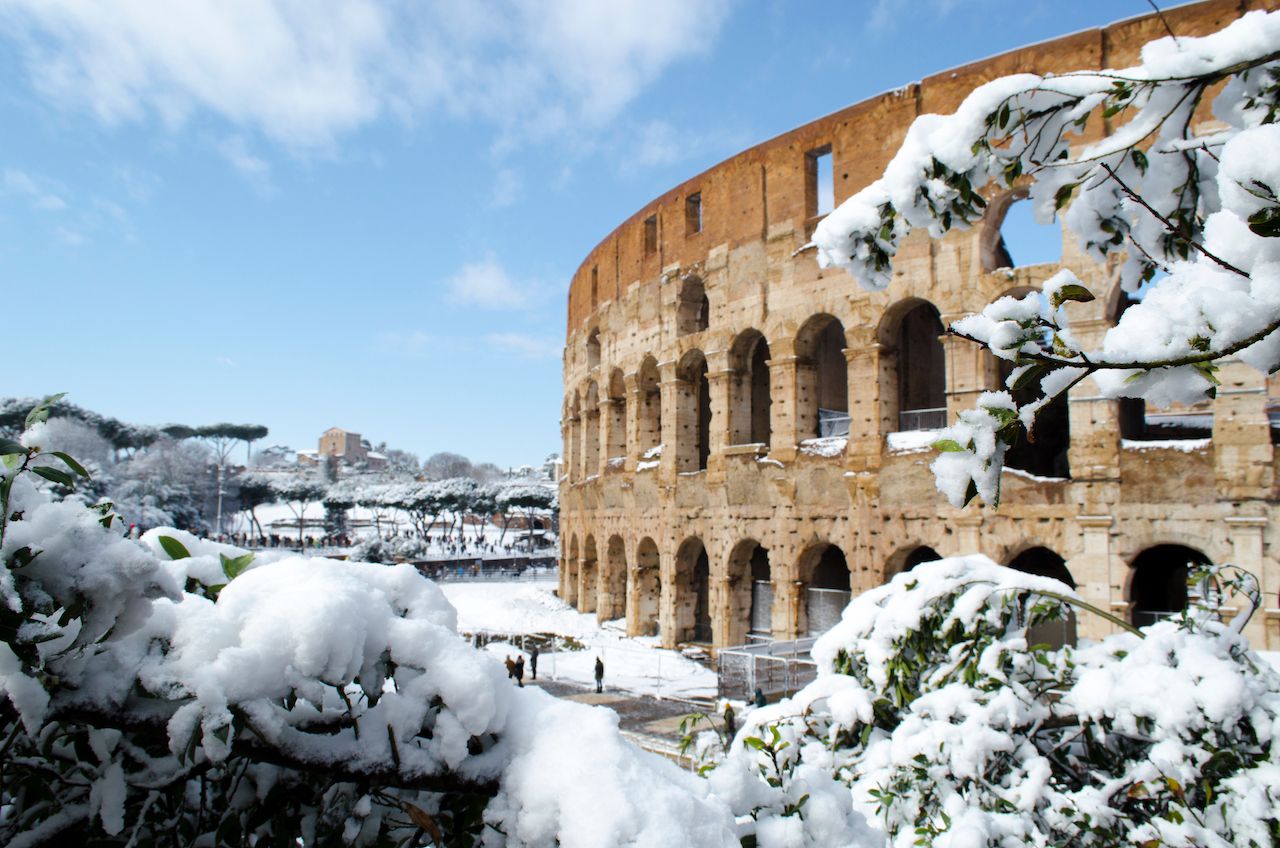 There’s something about old Roman lore that makes a blanket of white snow seem totally appropriate. The Roman Coliseum and nearby Roman Forum have endured nearly 2,000 years of empire and wars, so even the depths of winter fail to hinder their glory. The Roman Forum was constructed in 203 AD as a tribute to the ancient Romans defeat of the Parthians, and its revered dominance among Rome’s historic sites attract visitors year-round — but far fewer in winter than in summer. The Roman Coliseum, opened in 80 AD as the largest amphitheater in the Roman World, kicked off 100 days of revelry to commemorate its status as the social hub of ancient Rome, and its global fame today marks it as the most renowned architectural achievement of the Roman Empire. 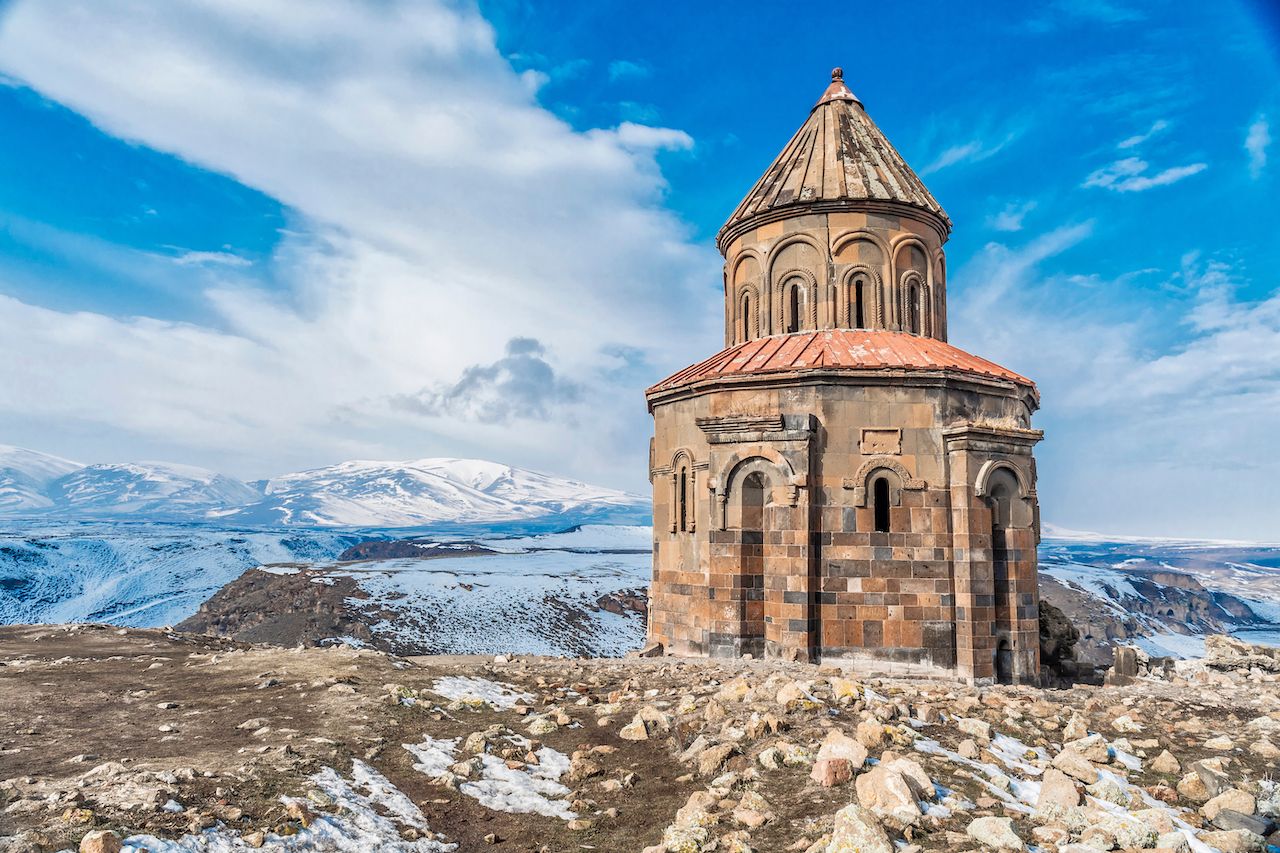 These ruins are what remain of the ancient capital city of the Bagratid Armenian kingdom. The ruins, located in Turkey’s far east, near the border with modern-day Armenia, date to at least the fifth century. The city’s population was attacked and brutally murdered in 1064 by the Seljuk Empire, marking the end of its dominance as a major regional capital and economic hub. The long shadows cast during the colder months evoke the area’s turbulent history in a way that the summer sunshine never quite can. With the surrounding mountains and open space covered in the white of winter, the snow cover helps the ruins recover the image of their former glory. Visitors can charter a day tour via bus from the nearby Turkish city of Kars to include a guided tour of the ruins overlooking an expansive canyon carved by the Akhurian River below, as well as the old city of Kars. 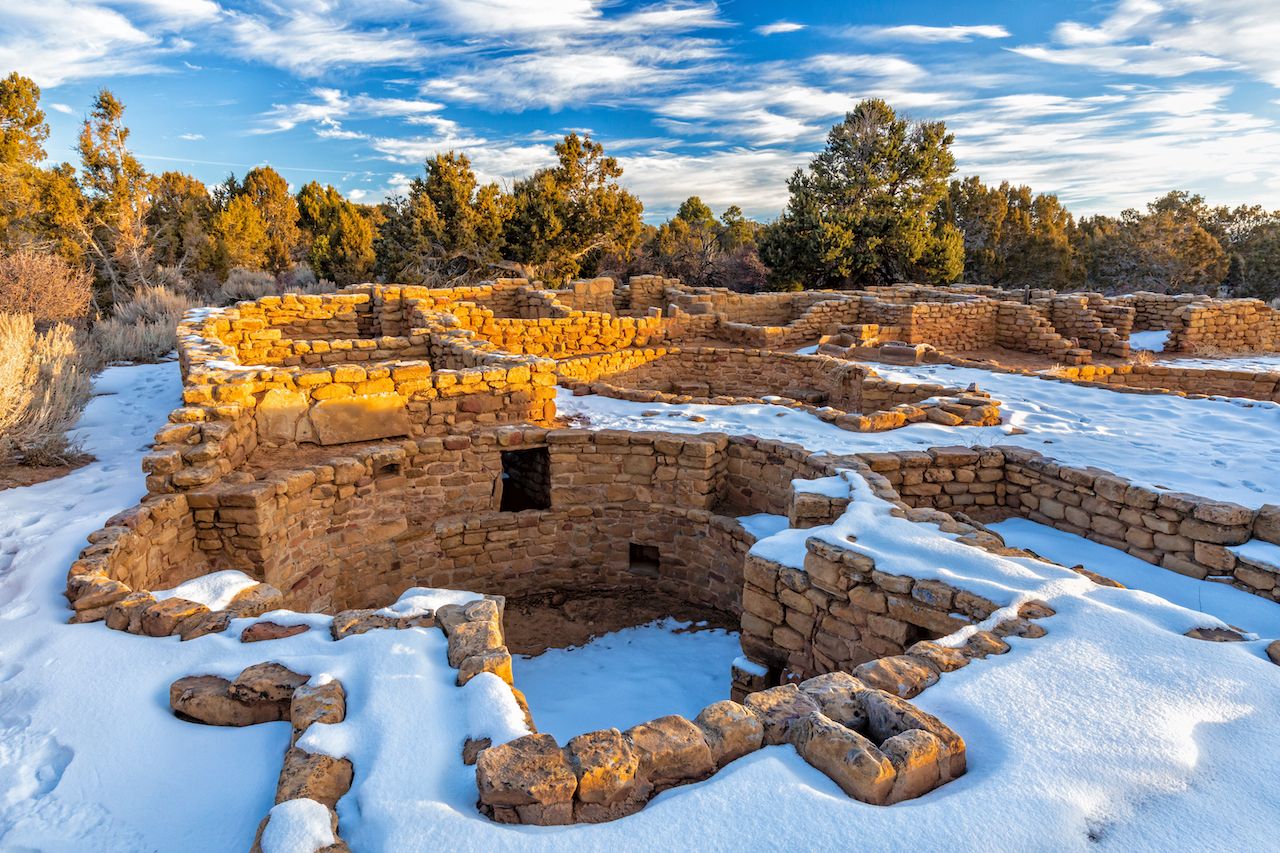 Mesa Verde National Park’s famed Cliff Dwelling is one of the most photographed sites in what is now Colorado, historically the land of the Anasazi. Add snow and you actually have a unique shot for your social media channels. With snow approaching its base, the view of the ruin site from the overlook offers a glimpse into how the dwelling’s inhabitants survived the area’s often harsh winters. A winter trip to Mesa Verde, accessible from the nearby town of Durango, is incomplete without heading up Chapin Mesa to Coyote Village, which didn’t benefit from the safety of a cliff overhang but gives an up-close look into Anasazi architecture. 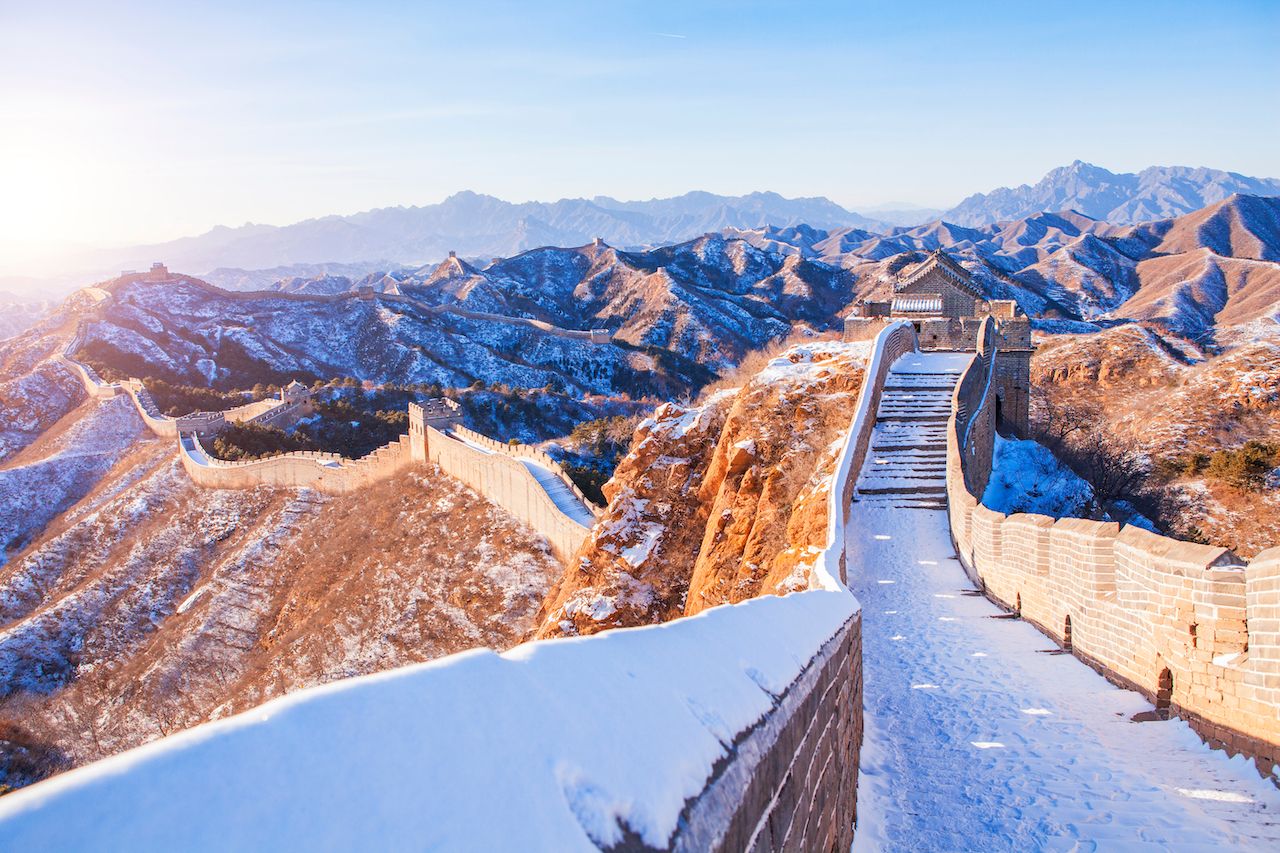 The Great Wall of China is among the most iconic historic structures anywhere on the planet and, according to legend, the only one viewable from space (though NASA isn’t quite sure about this). While you may never have the chance to determine whether or not that’s true, you can see the wall in all its snow-covered glory in winter. There are far fewer people hiking the wall’s grounds during this season, meaning you won’t have to jostle for prime selfie positioning and can spend more time taking in the views without being pushed along. To visit the wall in winter, travel to Beijing and book an organized tour to Badaling, Jinshanling, Juyongguan, or Mutianyu. 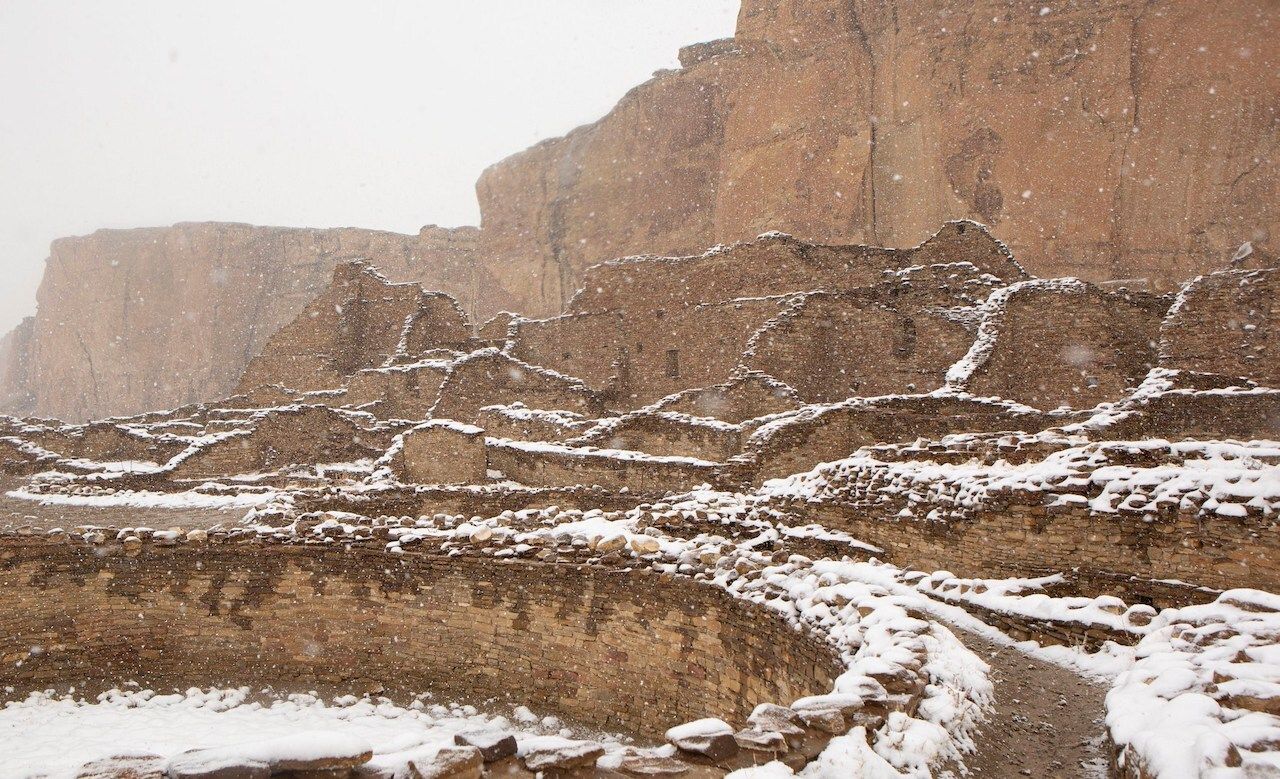 Chaco Canyon, in what is now northwestern New Mexico, was for more than 2,000 years a hotbed of ancestral Puebloan culture and activity. The primary and most popular site inside Chaco Culture National Historical Park is Pueblo Bonito, which was made up of a collection of special halls called kivas, rooms, and multi-story dwellings called “great houses.” Originally inhabited between the ninth and 13th centuries, the structures were where the Chacoan people held religious ceremonies and gatherings. The area was a major social and economic center for the Chacoans, peaking in the 11th century. Also worth a winter visit is the nearby Aztec Ruins National Monument outside the town of Aztec. 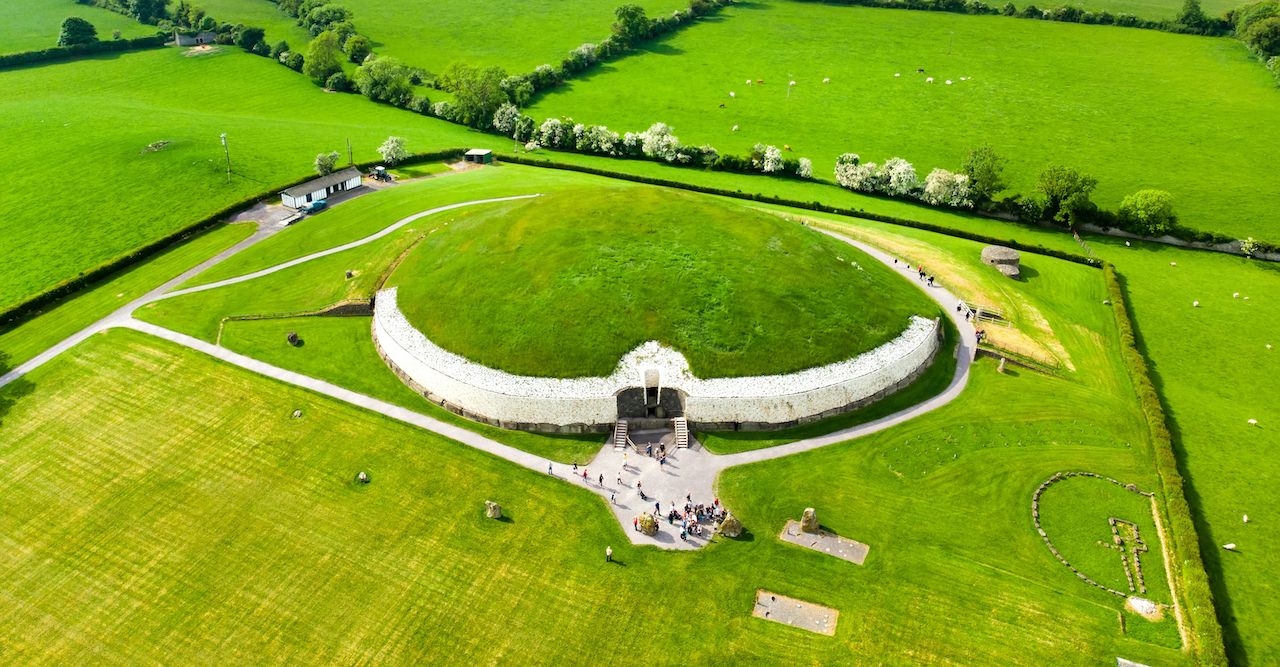 You likely won’t find Newgrange covered in snow. Rather, its primary wintertime draw is the winter solstice. Each year on the day of the solstice, the sun rises in alignment with what’s called a “roof box” and fills the inner chamber with rays of sunshine, a rare occurrence of natural lighting in an enclosed — and technically underground — space. Solstice morning crowds book well in advance through a lottery, but even if you don’t win a ticket to the celebration, stop by later in the day for a tour inside the chamber. The experience is nearly as magical. Often, guests bring traditional instruments to ring inside the chamber, and on-site tour guides explain the significance of each part within the cathedral-in-the-green, built by the Tuatha Dé Danann for their king around 3200 BC.

Art + ArchitectureThe 8 Most Beautiful Small Towns in Brazil
Tagged
Archaeology
What did you think of this story?
Meh
Good
Awesome