South of Australia lies Tasmania, a triangle of an island that looks like it broke off from Australia and is slowly drifting toward Antarctica. Measuring 25,000 square miles, this Australian state has nearly half of its wild countryside designated as national parks. In these parks live unusual wild animals that are hard to spot anywhere else and that make their homes among the diverse eucalyptus trees native to the area.

“Tassie” is just a puddle jump from the mainland city of Melbourne. Its 19 national parks have rugged mountains, pale-sand beaches, and vast stretches of woodland home to endemic wildlife. Much of this land, representing more than 20 percent of the island’s total, is under UNESCO protection as the Tasmanian Wilderness World Heritage Area. Hiking in Tasmania is an opportunity to experience nature in an intimate manner, though many of the top attractions don’t require much of a walk at all. Here’s a rundown of memorable things to see and to do in Tasmania and its national parks, by activity.

The best national parks for hiking in Tasmania 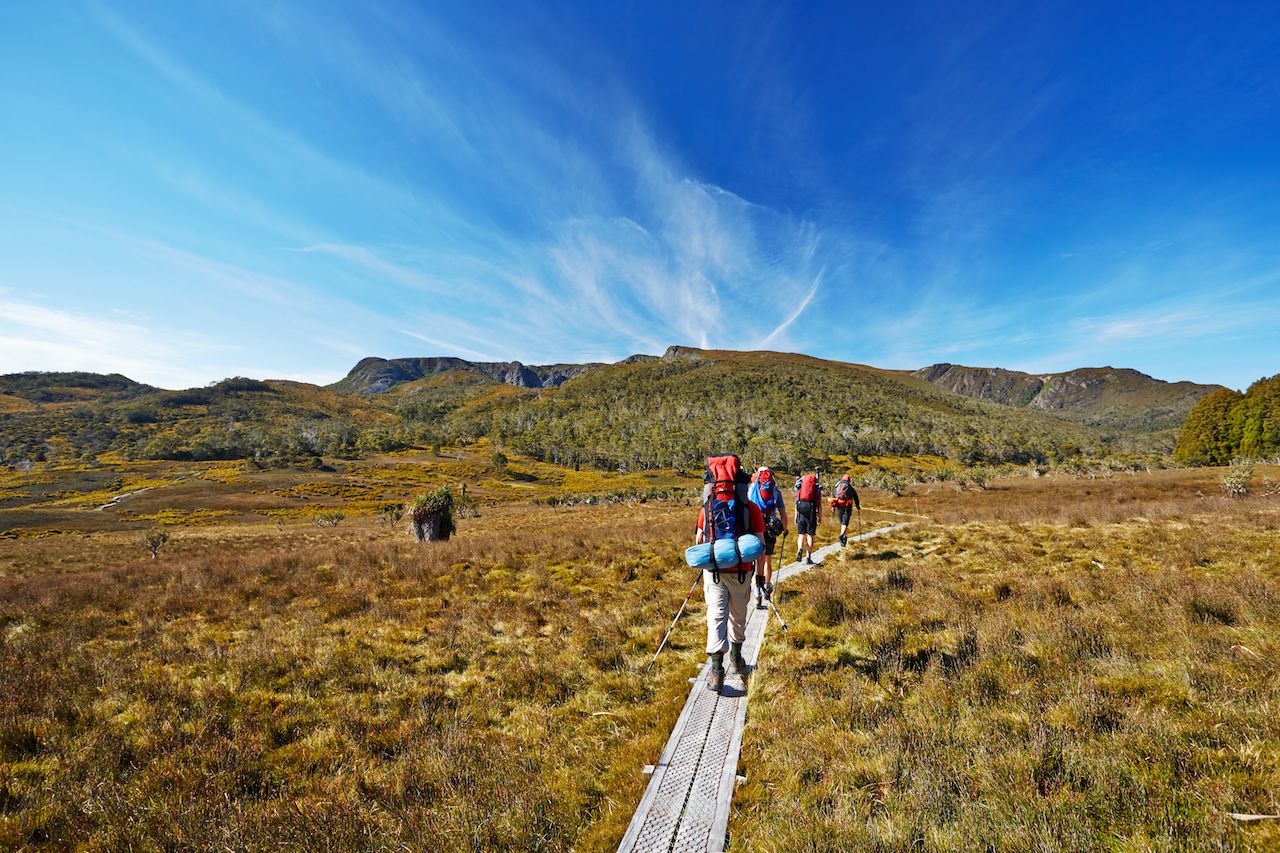 Cradle Mountain-Lake St. Clair National Park is located in the island’s mountainous Central Highlands. It’s home to numerous trekking routes, including the 40-mile Overland Track, a strenuous high-alpine that covers the park’s entire bushland. En route hikers pass streams, lakes, and waterfalls, all surrounded by some of the island’s most beautiful mountains and glacier-etched valleys. Note that, despite being 3,000 miles from Antarctica, nothing but ocean lies between Tasmania and the frozen continent — so storms can appear even during the warm months of summer.

As such, if you plan to hike the entire trail, do so with a guide from Trek Tasmania. Alternatively, choose a short section or embark on a relaxed, three-mile journey across the boardwalks of the Crater Lake Circuit. Here you’ll visit Wombat Lake — where you’re likely to see an actual wombat — along with Lake Lilla and climb up a bit of the Crater Wall to overlook the namesake lake down below.

Two popular treks are located in Tasman National Park in the far southeast of the country, on the Tasman Peninsula. The 6.3-mile Cape Hauy Track can be done in less than one day by moderately fit hikers, with multiple stops along the way to look out over the cape into the Tasman Sea, making for ideal picnic spots. For a much longer hike, the Three Capes Trek generally takes fit hikers four days to complete, traversing the cliffed coastline to Cape Raoul, Cape Pillar, and Cape Hauy over the course of four days. As a guided trek, the experience covers just under 30 miles and includes lodge stays each evening. You can also hike to individual capes as shorter day hikes.

In the peninsular Freycinet National Park on Tasmania’s east coast, the Wineglass Bay hike leads to a lookout over mountains and water with the park’s views stretching from the Tasman Sea inland across the bay. Mount Field National Park, 90 minutes northwest of the capital city of Hobart, is ideal for medium-distance day hikes that offer a decent challenge but can be done in a half-day or so and allow you time to get back to lodging in the city afterward. Try the four-mile Lady Barron Falls Circuit or the 5.5-mile Mount Field East trail from Lake Nicholls.

Walk to beachside attractions in Freycinet and Tasman national parks 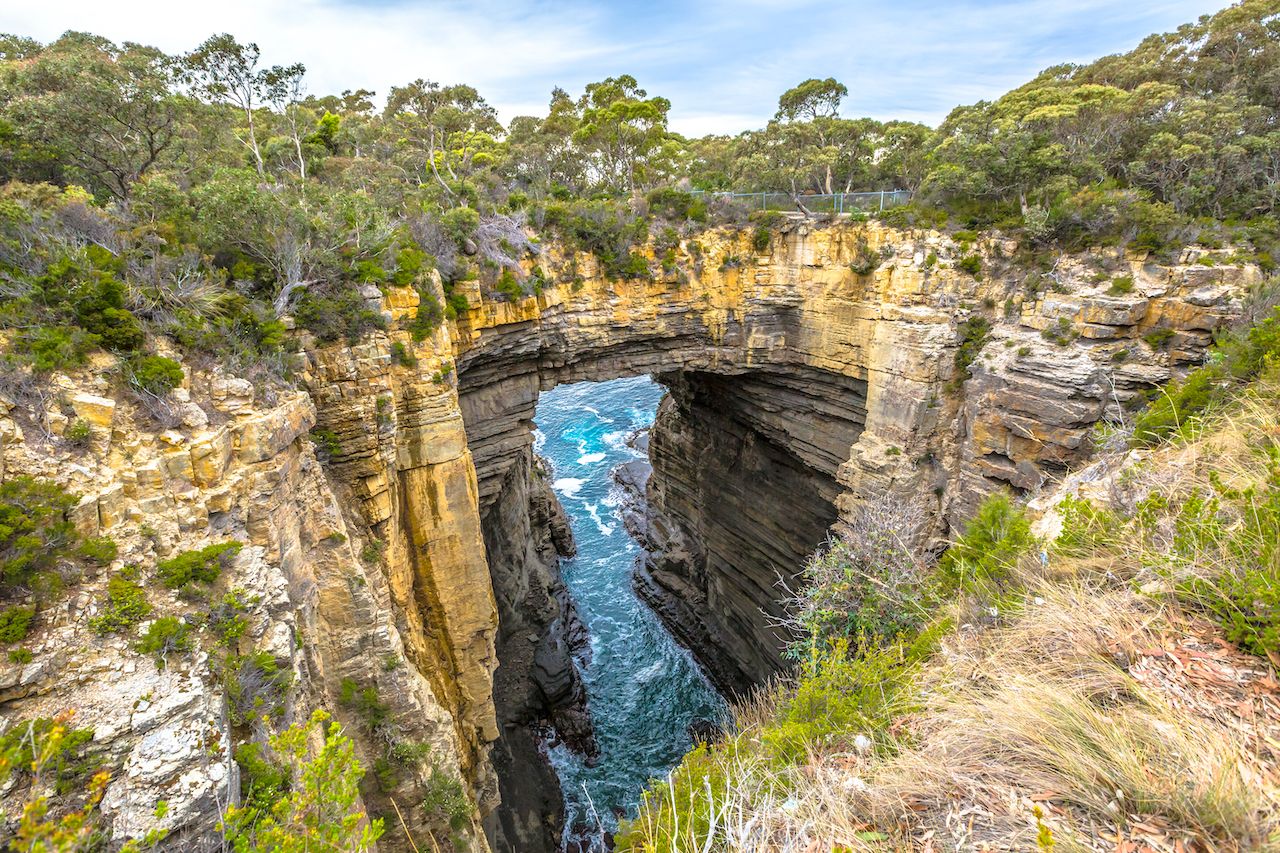 Tasmanian national parks encompass diverse landscapes, with coastal mountains dropping to beaches at times devoid of footprints. Offering great reward for little effort, Friendly Beaches in Freycinet National Park is a short walk from a well-marked adjacent parking area. Here, walking the pale sand alongside crashing waves takes over half a day to cover nearly five miles to Friendly Point and back, or head to Rocky Isaacs Point just a few minutes’ walk from the parking lot. Don’t be fooled by the beach’s moniker, or the avid, wetsuited surfers offshore. Despite being called “friendly,” it is a wild beach with serious riptides and, like many Tasmanian beaches, cold water that can catch you off guard. Best to admire the aquamarine water from the soft sand.

If taking the Wineglass Bay hike in Freycinet National Park, an extra half hour of walking puts you at Wineglass Beach, the park’s other and more hidden spot for a beach day. Remember that you must add 30 minutes of walking back out as well, plus however long you spend on the sand.

Tasman National Park is best known for the Tasman Arch, a towering rock arch overlooking the water in this park on the Tasman Peninsula. You can visit the arch along with the trench of Devil’s Kitchen via an easy walking path from an adjacent parking area. Also stop to see the Blow Hole, where waves pass through a rock tunnel and shoot water up through the “blow hole” when the tide is in.

Where to see wildlife in Tasmanian national parks including wombats, Tasmanian devils, and wallabies 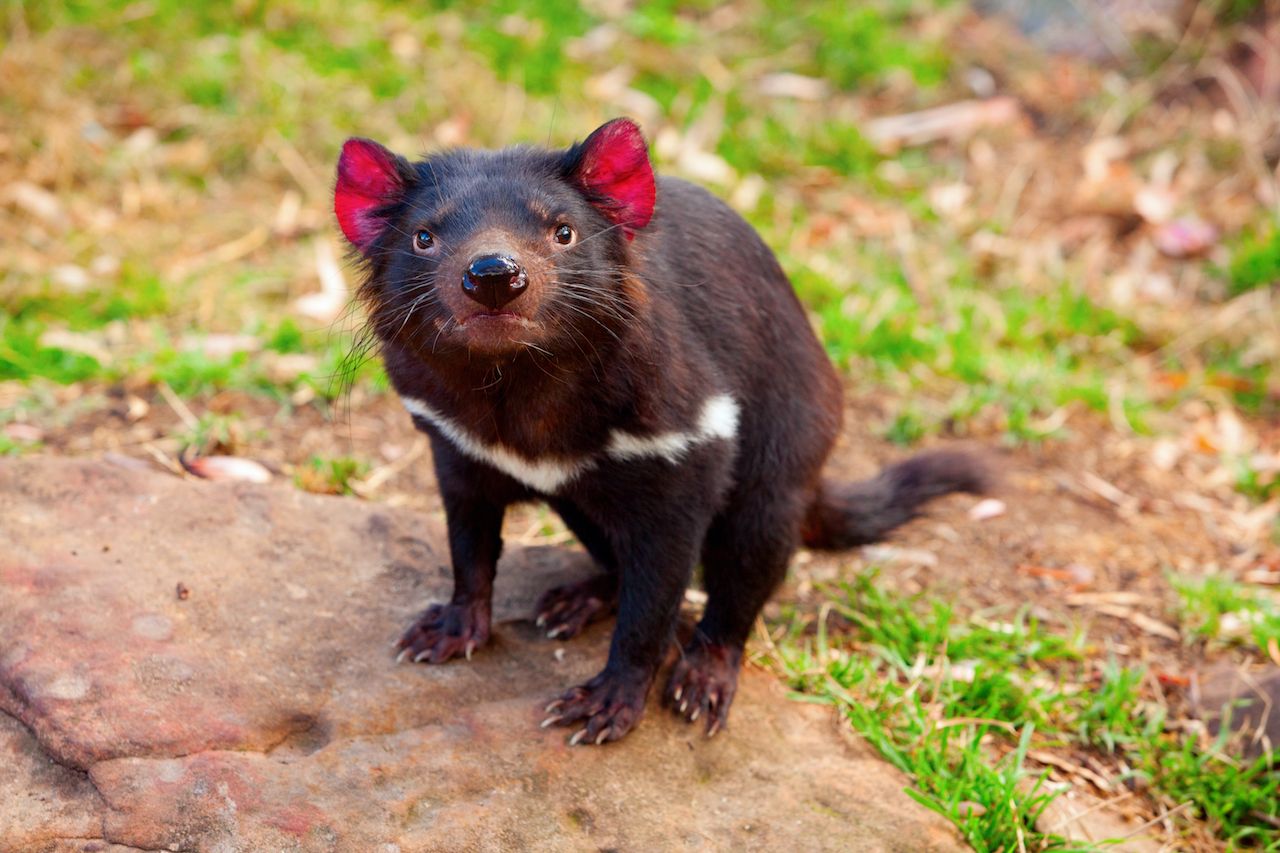 A popular thing to do in Tasmania and its wild places is to see a wombat while on the island. A common wombat-sighting spot is Ronnie Creek in Cradle Mountain-St. Clair National Park. An even better place is Maria Island National Park, where the wombat’s famously cube-shaped poop can be found dotting the park’s roads and trails. Hop on a bike or don hiking boots and hit a trail, as you’re likely to see the wombats emerging from their burrows.

Maria Island is an island off the state’s east coast that is entirely designated as a national park. This is the best place to see a Tasmanian devil. Healthy devils were relocated to Maria, as it’s known by locals, to repopulate the species as the spread of devil facial tumor disease began to decimate the population in the early 2000s.

Freycinet National Park is the best place to see wallabies in Tasmania’s wild. These smaller cousins to the kangaroo are as popular as Tasmanian devils and wombats. Book a campsite in the park and you’re likely to see many wallabies wandering by. You may also see possums and pademelons.

Mount William National Park, in the northeast of Tasmania, is often overlooked by visitors, but if you’re a birder, your entire itinerary should be built around this park. You’re likely to spot wrens, finches, cockatoos, and honeyeaters, along with migrating birds depending on the season. Forester kangaroos and wombats are common, as well. Hike to the summit of Mount William and back in under two hours, including time to gaze at the birds soaring past. 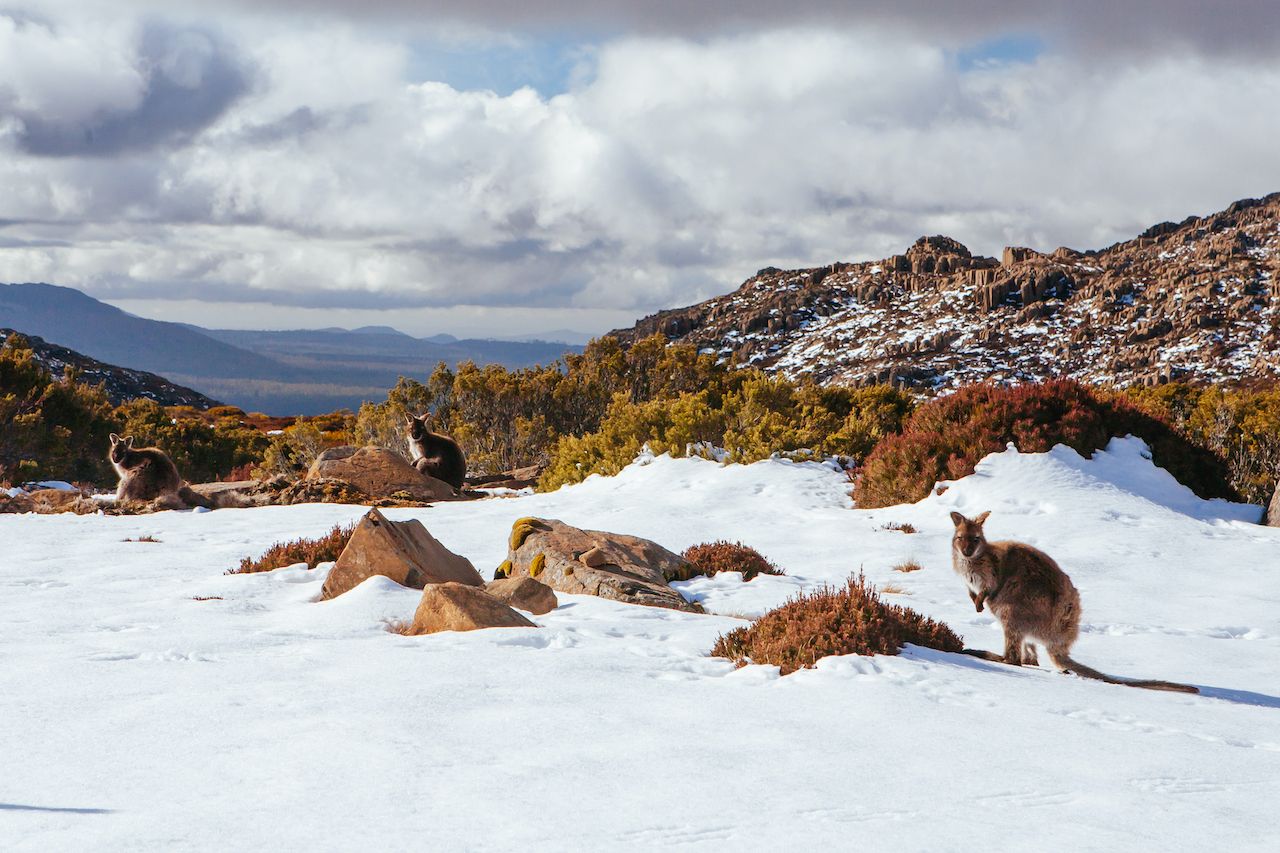 Rare is the North American tourist who plans a ski trip to Australia, despite the popularity of ski and snowboard travel to neighboring New Zealand — whose South Island crosses the same latitude as Tasmania. The skiing omission is regretful, according to Tasmania’s Ben Lomond National Park. Its ski resort of the same name offers seven lifts and some of Australia’s best intermediate skiing along with a cozy lodge offering the après-ski amenities you’d expect at any decent ski resort.

The resort is small, but tell your friends and family you’re going skiing or snowboarding in Tasmania and you’re bound to get at least a few questioning stares — especially because the ski season down south is the opposite of that up north. When the snow melts, rock climbing is a popular activity here.

During Tasmania’s summer months, from December to February, rafting the Franklin River is a popular activity in Franklin-Gordon Rivers National Park. Book a trip with Franklin River Rafting and see the island’s extensive rainforest from a unique perspective as you paddle your way across the moderate rapids.

Kayaking and canoeing is a common thing to do in Tasmania in many of the coastal parks with access roads leading to the water. Moulting Lagoon in Freycinet National Park is easy to access and your best chance at spotting a dolphin while in Tasmania. In Southwest National Park, the state’s largest, you can kayak on a number of lakes including Lake Pedder, surrounded by tree-covered peaks in all directions.

How to get to Tasmanania from mainland Australia 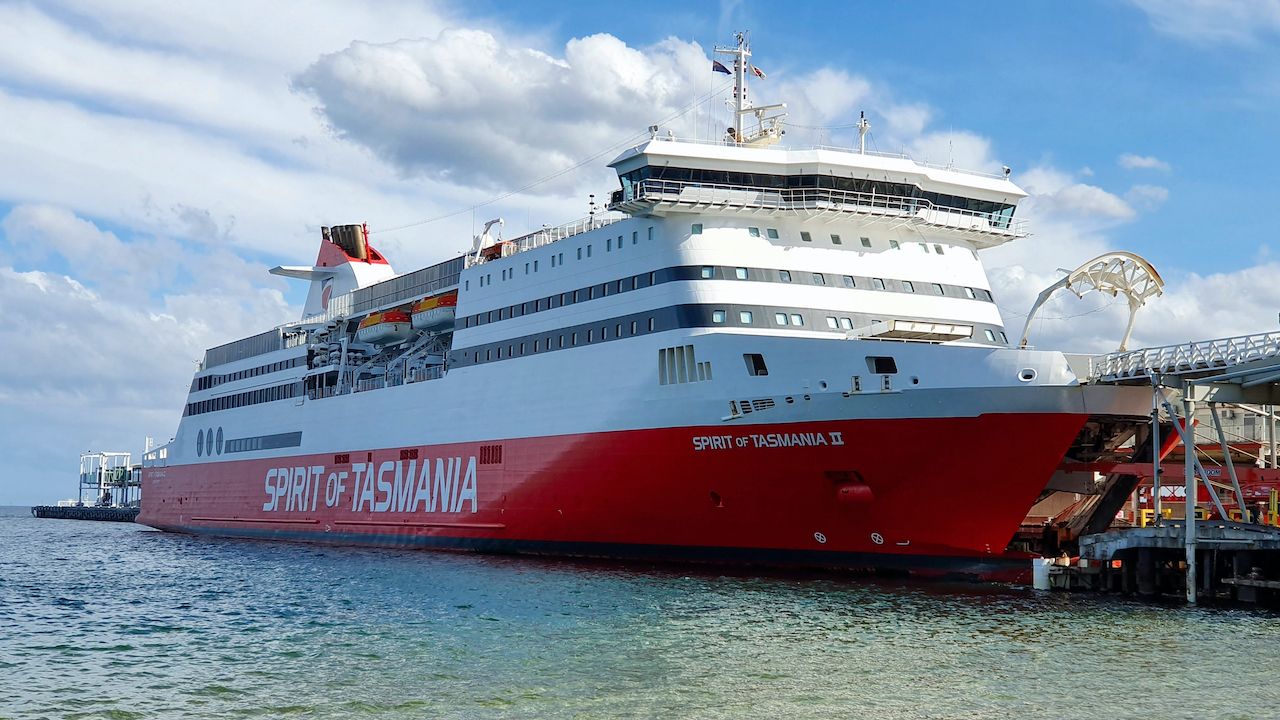 Tasmania has two airports that receive daily flights from mainland Australia. The largest is Hobart International Airport in the island state’s capital, where flights from Melbourne, Brisbane, and Sydney are easy to come by. Launceston, the island’s second-largest city with 68,000 residents, also receives daily flights from major cities on the mainland. Flying from Melbourne, the closest major city, takes an hour and 15 minutes and costs between $70 and $250.

You can also get to the island via the Spirit of Tasmania passenger ship. These overnight cruises sail from Melbourne to Devonport, with ships departing from each city nightly at 7:30 PM. Onboard accommodation is booked in a similar fashion to hostels and hotels: You can go basic with a recliner chair in the main lounge, secure a twin shared cabin designed for solo travelers, book a four-bed cabin designed for families, or luxuriate in the Deluxe Cabin, designed for adults seeking a top experience. Fares start at about $100 and rise according to the level of accommodation preferred and whether or not you’re bringing a vehicle. Moving about the island in a rental vehicle is straightforward. It takes about 4.5 hours to cross it, and leaving the relative urbanity of Hobart behind in favor of vast stretches of wilderness takes far less time than that.

HikingThis Under-Visited Region of Tasmania Is Australia’s Most Stunning Secret
What did you think of this story?
Meh
Good
Awesome

I’m a Professional Road Tripper. Here’s What I Never Leave Home Without.
The Ultimate Food Tour of New Haven, the Birthplace of American Pizza
This Historic Castle Distillery Is the Best Place To Drink in Kentucky Bourbon Country
Hilton’s Vallarta Riviera Will Change Your Mind About Booking All-Inclusives
The Truth About Artificial Vanilla Extract (and Why You Should Always Splurge for Pure)