The word barbecue is as loaded as the average plateful at a backyard cookout. It’s both a noun and a verb. One theory posits that it derives from barbacoa, the Spanish term for the Taíno technique of slow-grilling meat over hot coals. This would plant barbecue’s etymological roots in the Caribbean, but the act of smoking, pit roasting, and grilling heaps of beef, pork, poultry, and other proteins is grounded in customs that span nearly every continent.

Styles vary around the world, but all barbecue has one thing in common: It’s an excuse for friends and family to gather over food that’s just as much about culture as it is cuisine.

Americans know this as well as anyone. In Texas, brisket is backed by the same rabid enthusiasm that fuels Texas Longhorns tailgates. In Kansas City, burnt ends have contributed as much to the cultural identity as the jazz greats who made the city famous. Even in states with no claims to the United States’ best barbecue dishes, it’s hard to imagine a Fourth of July not anchored by a grill full of burgers and a cooler full of beer.

Like in the US, barbecues are a summer ritual in Australia, where they’re the backdrop to Australia Day celebrations every January. Even Christmas dinner, a meal once defined by British dishes that clashed with the season in the Southern Hemisphere, has come to revolve around the barbie, forging a chosen tradition over an inherited one.

Barbecuing on warm-weather holidays is a theme across the outdoor-barbecuing world. Roasted whole pigs, called lechón, are prepared in the Philippines for Christmas and other special occasions. Pigs are prepared in Tahiti, too, where above-ground spits are swapped for below-ground ovens. There’s even an initiative to rebrand National Heritage Day as National Braai Day in South Africa.

Jan Scannell, who goes by Jan Braai after South Africa’s barbecue style, started the initiative in 2005 to recognize one tradition that unites his countrymen. Archbishop Desmond Tutu supported the cause, calling Scannell’s mission an attempt at “nurturing and embracing a common South African culture, which is shared across all races and genders.”

Yet the act of barbecuing fosters a festive spirit even when it’s not tied to a specific celebration. In many cultures, barbecuing itself is an occasion. 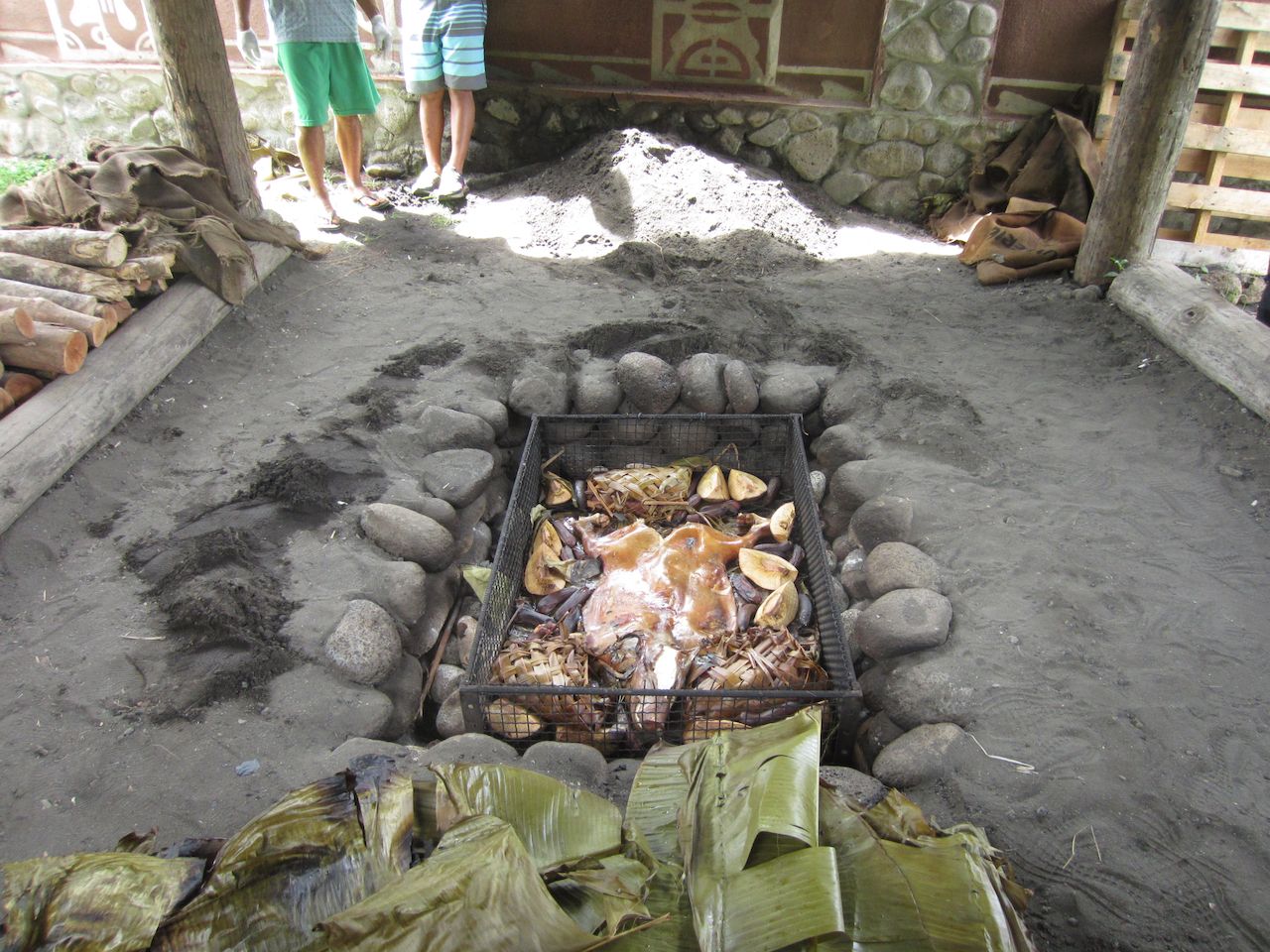 Heimata Hall, a Tahitian chef who now runs a food tour on the island of Moorea, grew up on family barbecues. He credits them with informing his decision to pursue food professionally. Every Sunday, his grandfather would wake up early to prepare the ahima’a pit in his backyard. His uncles would help with the large cuts of meat and fish while his grandmother and aunties prepared sweet potatoes, taro, and po’e, a type of fruit pudding.

The food would then be layered into the ahima’a, with the faster-cooking dishes on top. When it was time to eat, the family would say a prayer of thanks, and after they were finished, they’d break out ukuleles, drums, and guitars, with others reaching for spoons and cans, and spend the next few hours singing and sharing beers during the ensuing tamara’a.

“It was a very joyous time,” Hall says. “You’d have music playing in the background, everybody sitting around, talking story…Food just always brought everybody together.”

Though these Sunday gatherings are growing less regular with every passing generation, according to Hall, somebody, somewhere on the islands, still hosts one every weekend. And, even when not in use, the ahima’a is a reminder of Tahitian values.

“Growing up, I would say every household or at least family had one. Back then all the land was family land. One neighborhood could be one family, and it could consist of 50 people, or 100 people, or more,” says Hall, who also notes the significance of planting banana trees at home.

“A lot of people don’t realize what the banana tree represented for a family,” Hall says. “It was used to feed the people but also used for the underground oven. You need the stumps to put over the rocks to bring the heat down and create steam, and then you put the banana leaves down at the end to help keep the smoke in.”

This low-and-slow cooking style was created by design: It guarantees ample time spent with loved ones. And it’s not unique to French Polynesia.

Like in Tahiti, Sunday is largely viewed as a family day in Argentina. Often this means gathering for an asado, which is a common way to celebrate birthdays, graduations, engagements, and other events as well. 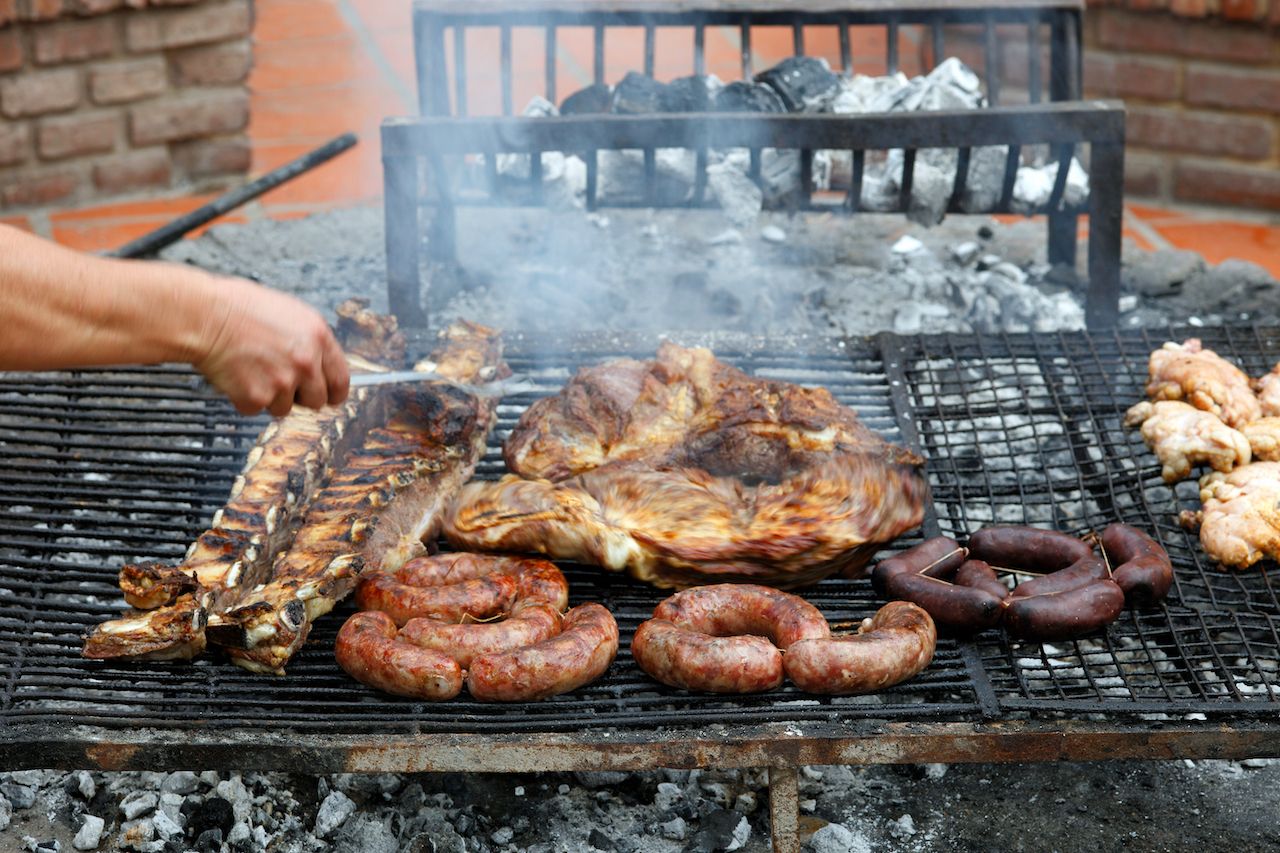 In the Argentine tradition, time is the key ingredient in barbecue. It’s otherwise unfussy, centered on bread and meat that’s not marinated or accompanied by a slew of side dishes. Asadors keep a close eye on the heat of their parrillas, or grills, cooking at a low temperature over a long time. Food is then served in several rounds.

A proper asado requires endurance, says Rachel Fuller, co-author of The Food of Argentina: Asado, Empanadas, Dulce de Leche, and More. Fuller was born in Australia but lived outside of Buenos Aires, where she met her future husband, for a year.

Fuller attributes more than just the way Argentinians eat to this asado culture. “Argentinians are really good storytellers,” she says, recalling instances from her annual visits to her in-laws in which she found herself wrapt by conversations that were “about absolutely nothing, but everybody keeps going at length, and everybody’s interested.”

“To me, it seems a product of growing up eating asados or drinking mate,” she says, “where you have this concept, or lack of concept, of time. Where you’re walking into something going, ‘This takes as long as it will take,’ and you have all this time and space for sitting around and talking.”

Not all barbecue is as slow as asado, however. Neither do all barbecuing traditions center on fresh air and family. Yet even meals enjoyed in a restaurant setting, with friends or colleagues, on any random day of the week, share glimpses into a culture outside of a strictly culinary context. 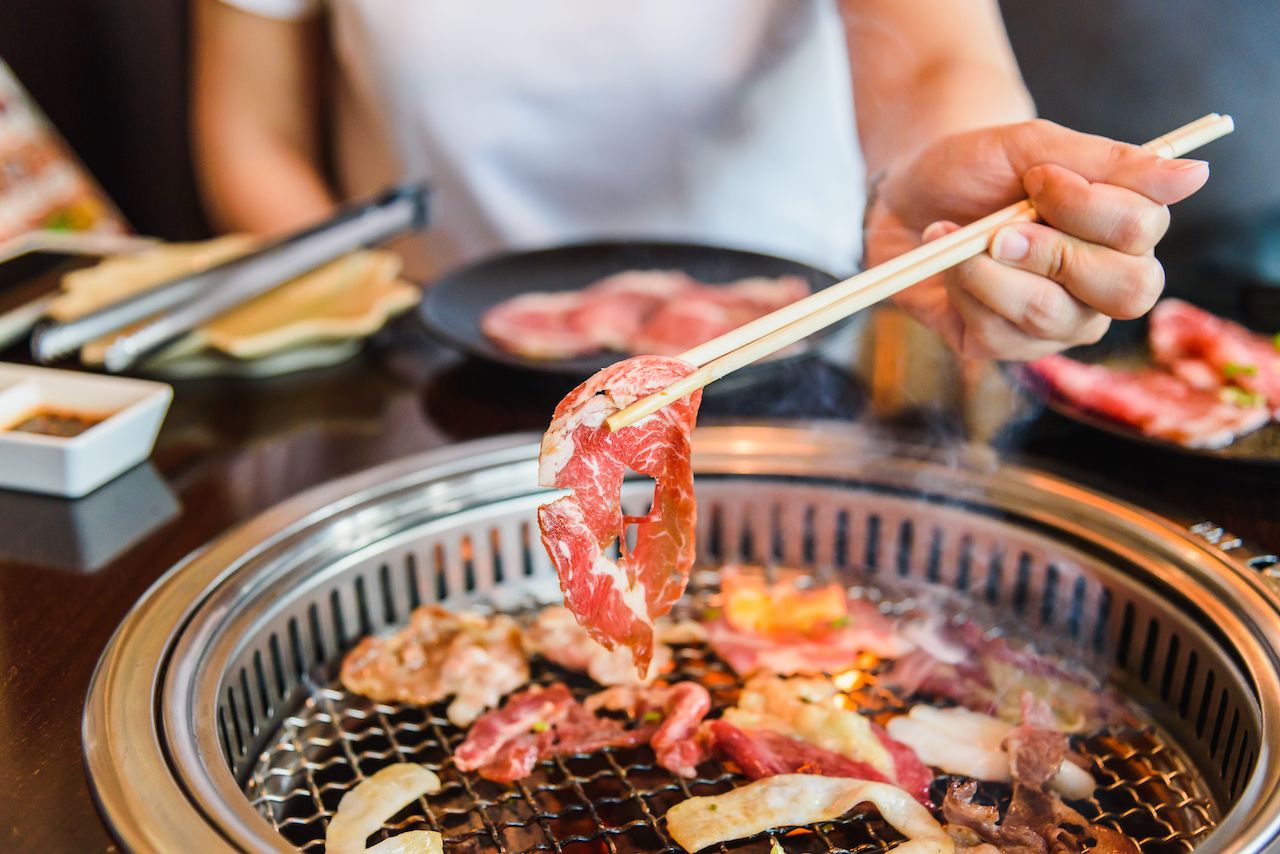 Take Korean barbecue. Unlike in Argentina, where asadors do all the work and guests show their appreciation by joining in a round of applause, diners in Korea cook their own meat over smaller, communal grills. Sauces and sides, called banchan, are plentiful.

Still, etiquette is integral to Korean barbecue: Elders at the table signal when it’s time to eat by taking the first bites. Mesh grills are reserved for beef while pork is to be cooked on a hot plate. Diners tally their orders on a bill as they eat and pay up front when they’re finished. The rules around preparing, sharing, and eating barbecue may be different everywhere, but every barbecuing culture invariably has rules that testify to its values.

Anyone who’s ever barbecued, whether in their home country or abroad, already knows how special it is to share a meal with loved ones over a place’s favorite foods. Recognizing how significant barbecue culture can be is easier to overlook.

Keep that in mind, though, and your next barbecue experience will be that much more delicious.