Mental images of the desert can evoke a lone cactus baking in the blistering heat of a high-noon sun. But deserts are a lot more complex than that, and many of them are found at higher altitudes that see sub-zero wintertime temperatures. In the absence of moisture in the air, even warm days can turn quickly to frigid nights once the sun dips below the horizon. Add in an overnight storm, and you may find yourself waking up to a desert landscape in a sparkling blanket of snowflakes. From California to Arizona, New Mexico and Idaho, these are the deserts that are even more beautiful once the snow falls. 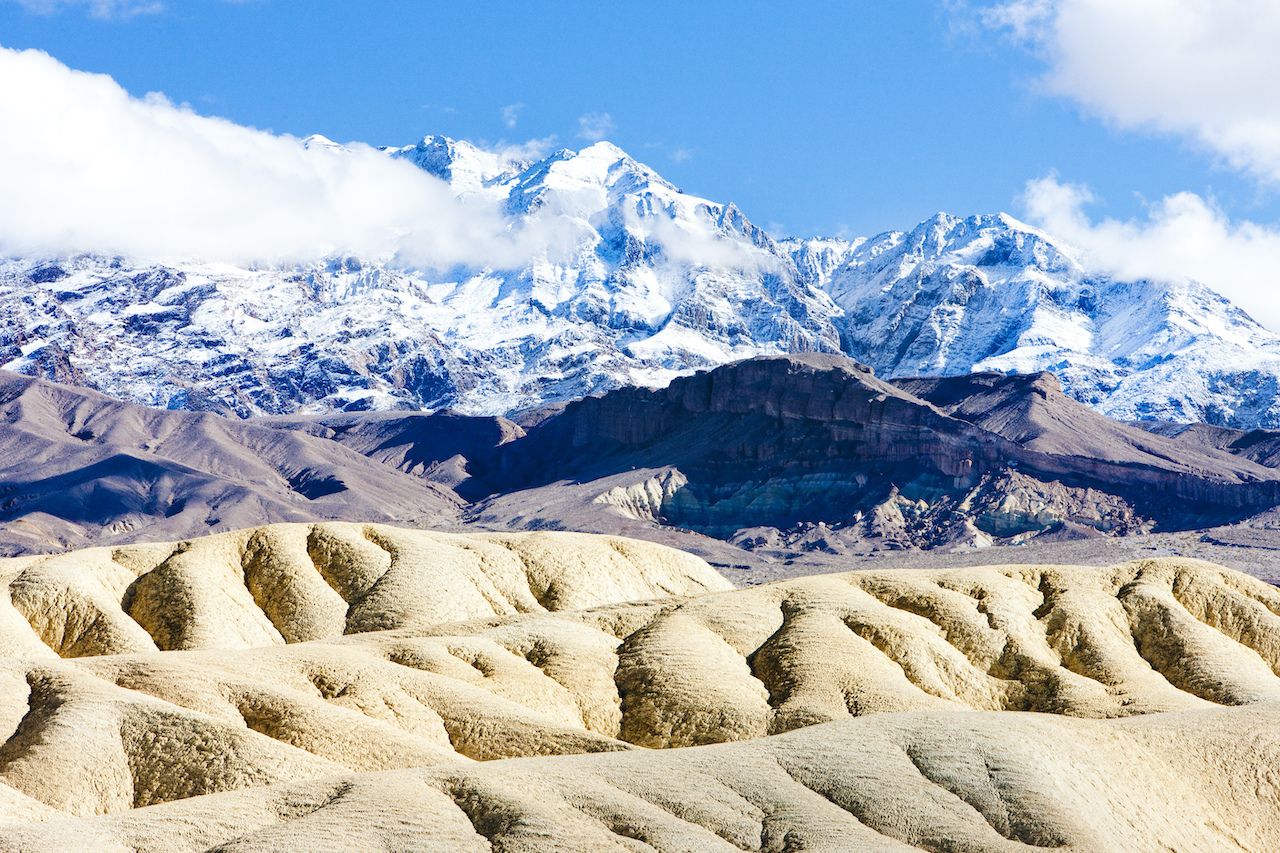 Given that Death Valley’s summertime temperatures are some of the highest on the planet, this has long been a national park to visit in the cooler months. And in winter, when the snow falls on the 11,000-foot-high Panamints, a mountain range at the northern end of the Mojave Desert within Death Valley, the scene is breathtaking. Work your way up from the valley floor, which is at 282 feet below sea level, to Zabriskie Point, one of the most famed locations in Death Valley National Park. From Zabriskie, with its undulating waves built from the sediment of a five-million-year-old lake, savor the juxtaposition of the arid, earth-toned valley floor and the snowy peaks behind it. 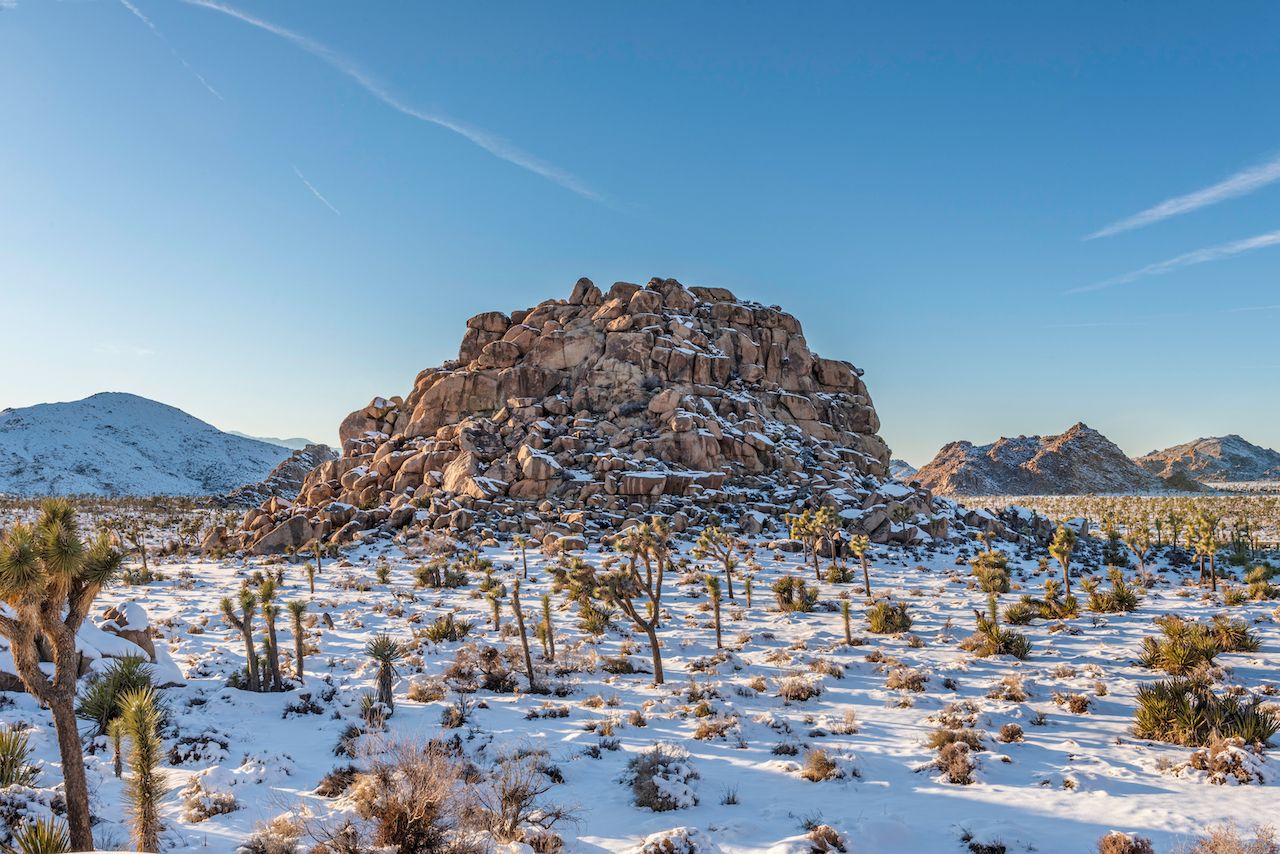 The highest elevations at Joshua Tree National Park top 5,500 feet above sea level. Add in ultra-dry air that doesn’t hold in the daytime warmth, and temperatures dip low enough on winter nights for it to snow — averaging an inch of snowfall annually. If you can time it right, it doesn’t get more magical than seeing freshly fallen flakes gracing the smoothly rounded boulders that seem straight out of The Flintstones and the Joshua trees, which are actually tall yucca palms that look like something from an alien planet. 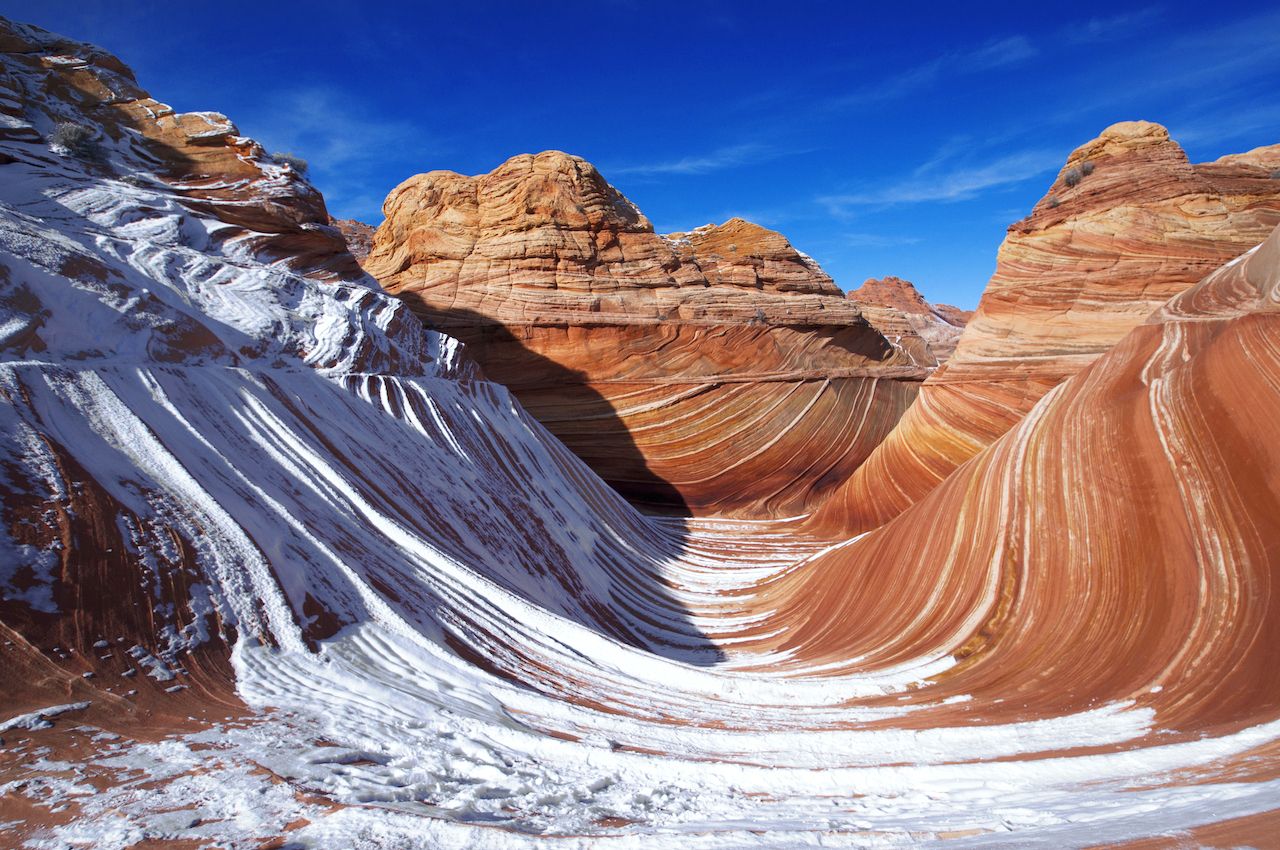 The Coyote Buttes inside the Paria Canyon-Vermilion Cliffs Wilderness Area are spectacular at any time of year, but catching them with a layer of snow is like looking at a multi-layered cake with vanilla icing. The most famous place is “The Wave,” which is more like a gulley, and which requires advanced reservations to see up close. You can enter the lottery to do so here. But if you are lucky enough to see these different strata of sandstone, so colored due to iron-oxide deposits, sprinkled with winter white, it’ll be a memory to cherish forever. Throughout Paria Canyon, the brick red sandstone formations rival those of Bryce Canyon, but attract a lot fewer visitors. 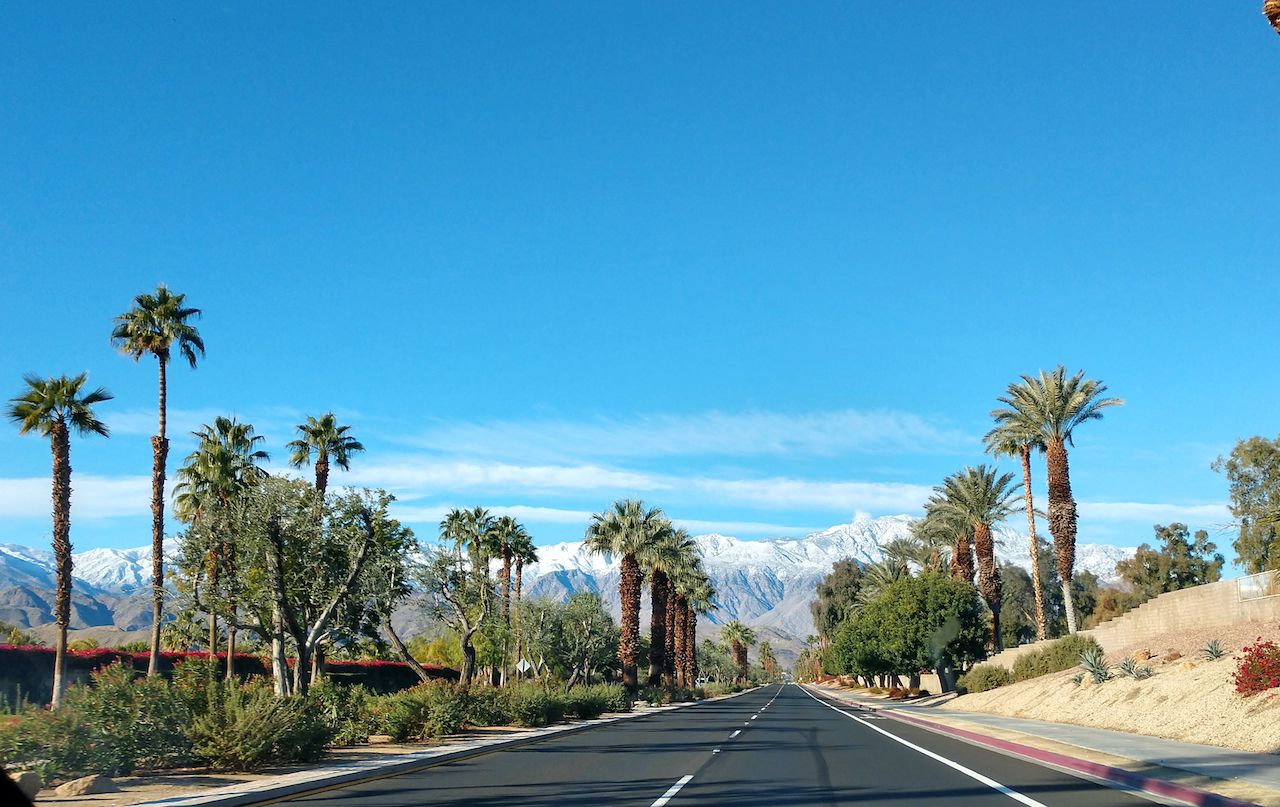 Winter in the desert doesn’t always require snow on the ground to be striking. In Palm Springs, stroll through town and then look up to see the mountains of the San Jacinto Range, many of them surpassing 10,000 feet, decked in winter white — it feels almost incongruous. Even more inimitable is the experience of getting onto the Palm Springs Aerial Tramway in shorts and T-shirt weather and disembarking at 8,516 feet to a mountaintop covered in snow. You’d best have packed warm layers with good hiking boots, because the tram gives you access to over 50 miles of trails in the Mount San Jacinto Wilderness area. There aren’t too many places in the world where you can hike on snowy trails flanked by limber pine and lodgepole pine trees, and then take the tram back down to a palm-tree flanked hotel and sip a cocktail poolside. 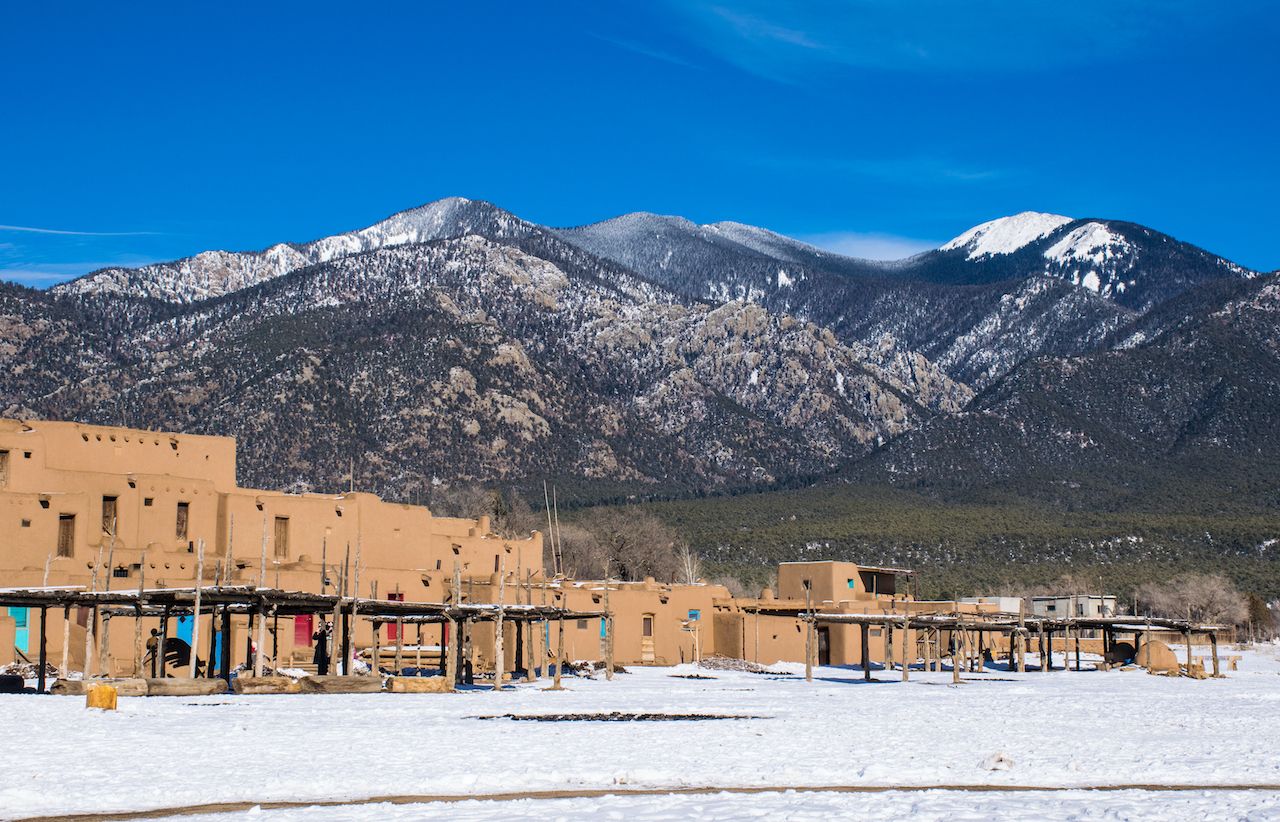 New Mexico is one of our favorite winter road trip destinations, and Toas is one reason why. The picturesque desert town, located at nearly 7000 feet, is a vibrant artist colony at the foothills of the Sangre de Cristo Mountains. It’s home to Taos Pueblo, one of the oldest continuously inhabited settlements in the United States, as well as excellent chili rellenos and other savory cuisine. It being winter, you may prefer to warm your hands around a cup of hot chocolate and savor some freshly made fry bread, served hot and drizzled with honey. After a day enjoying the wintery scene in Taos, you can drive up into the mountain behind town to Taos Ski Valley, which we’ve called one of the best places to ski in North America. 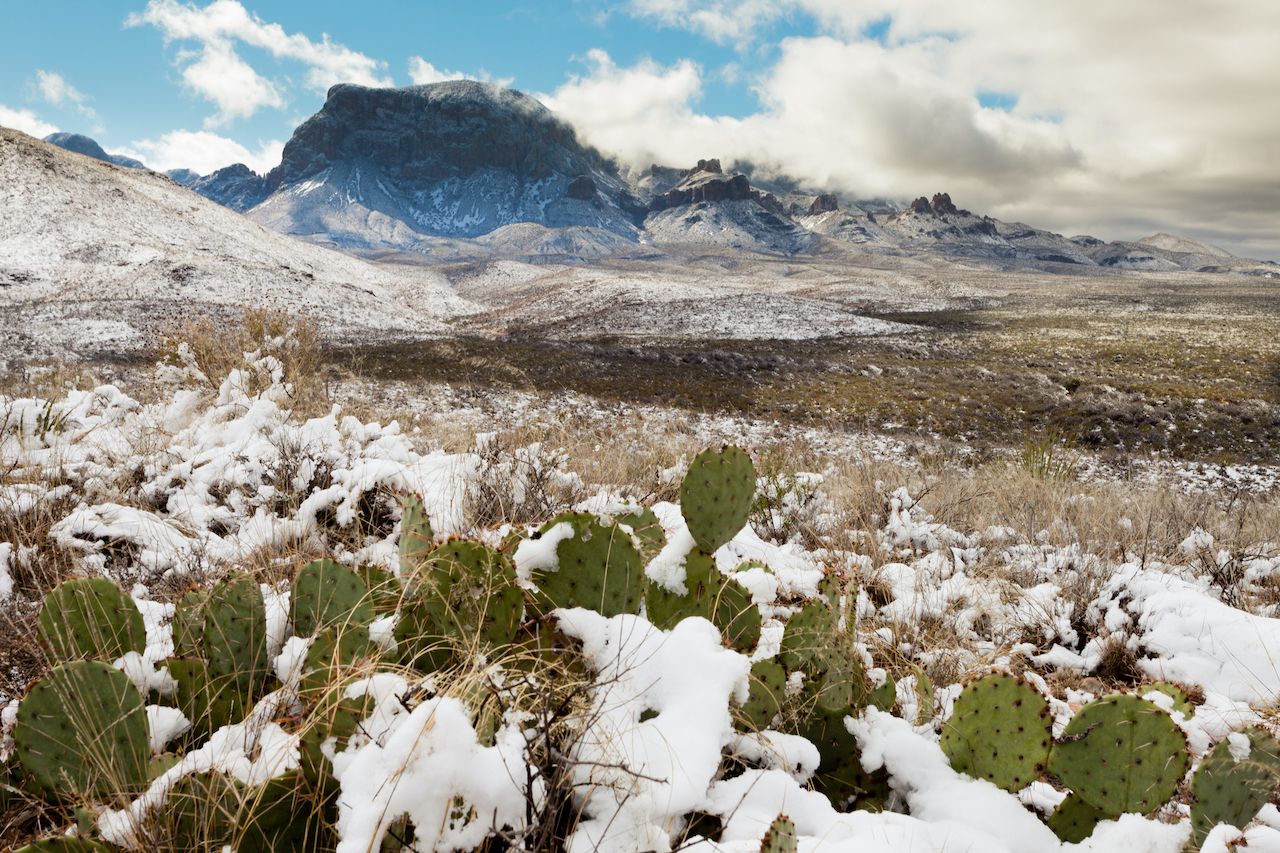 The Chihuahuan Desert in Big Bend National Park receives very little rainfall, as storm systems are blocked by the mountain ranges that surround it. Yet it gets enough rain in the summer to support several native species of plants and animals, and a dusting of precipitation in winter that falls as snow in the higher latitudes. The leafy agave plants and prickly pear cactuses look so incongruous when they are covered in snow, but they lap up the moisture and store it to last during the dry months of spring. 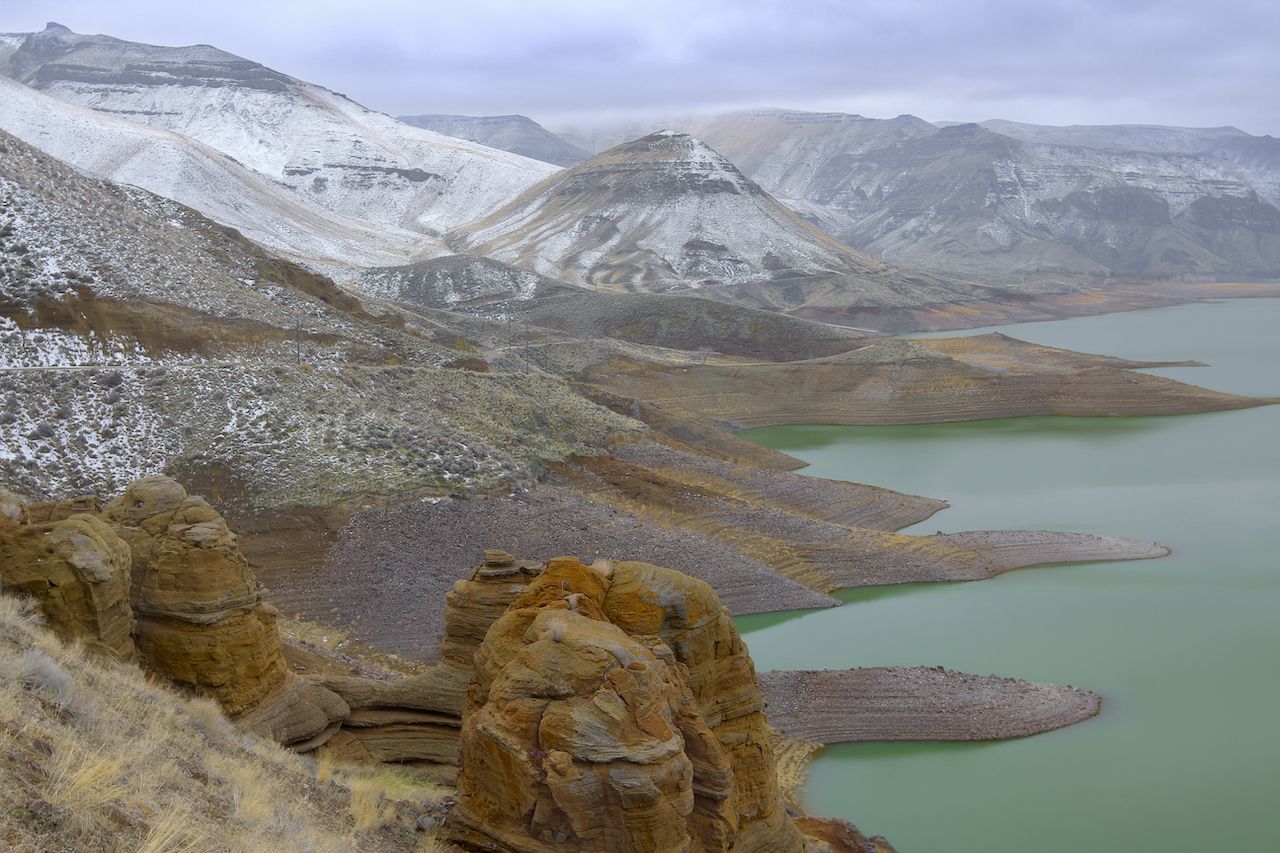 Canyons criss-cross this high desert plateau that stretches across three states — from Oregon to Idaho to the northern reaches of Nevada. This Bureau of Land Management area is some of the most remote in the country, offering sightings of elk, mule deer, and bighorn sheep. Although summer is the time for river rafting and fishing, winter brings a snowy solitude that is hard to replicate in many places. Note that winter can see road closures and limited opportunities to visit, so if you do manage to see it with winter’s sparkling blanket, consider yourself fortunate.

CampingThe best places to go camping in the desert in the US
Tagged
Parks + Wilderness United States
What did you think of this story?
Meh
Good
Awesome

7 places where you can admire towering sequoias in Europe
Argentina’s wine country is an outdoor adventure paradise at the foot of the Andes
Biscayne National Park is the perfect day trip from Miami
The best Maldives experiences that combine luxury and wildlife
California’s four least-visited national parks are some of the raddest places in the US. Here’s why.

9 experiences you never knew you could have in Nebraska

NYC will host a massive ‘Homecoming Week’ in August with a 60,000-person concert

Beginner’s guide to visiting the Hawaiian island of Molokai

7 things that will surprise you about Myrtle Beach, SC

National forests are trending for summer travel, and we’re here for it

How to see Chile’s otherworldly Atacama Desert, the driest place on Earth