Combing the Earth for million-year-old fossils is a job many dream about but few actually pursue, but the good news is that it’s surprisingly easy to pull off as a hobby. A number of sites across the United States and the United Kingdom welcome amateur fossil hunters, as well as select spots across the globe. Countries like China, Argentina, and Morocco are rich with ancient remains though strict regulations can make excavations and even surface collection difficult. While above-board tours are worth looking into no matter where you’re headed next, be it Europe or Oceania, stick to these six spots for hassle-free fossil hunting and viewing in some of the most fossil-rich sites on the planet. 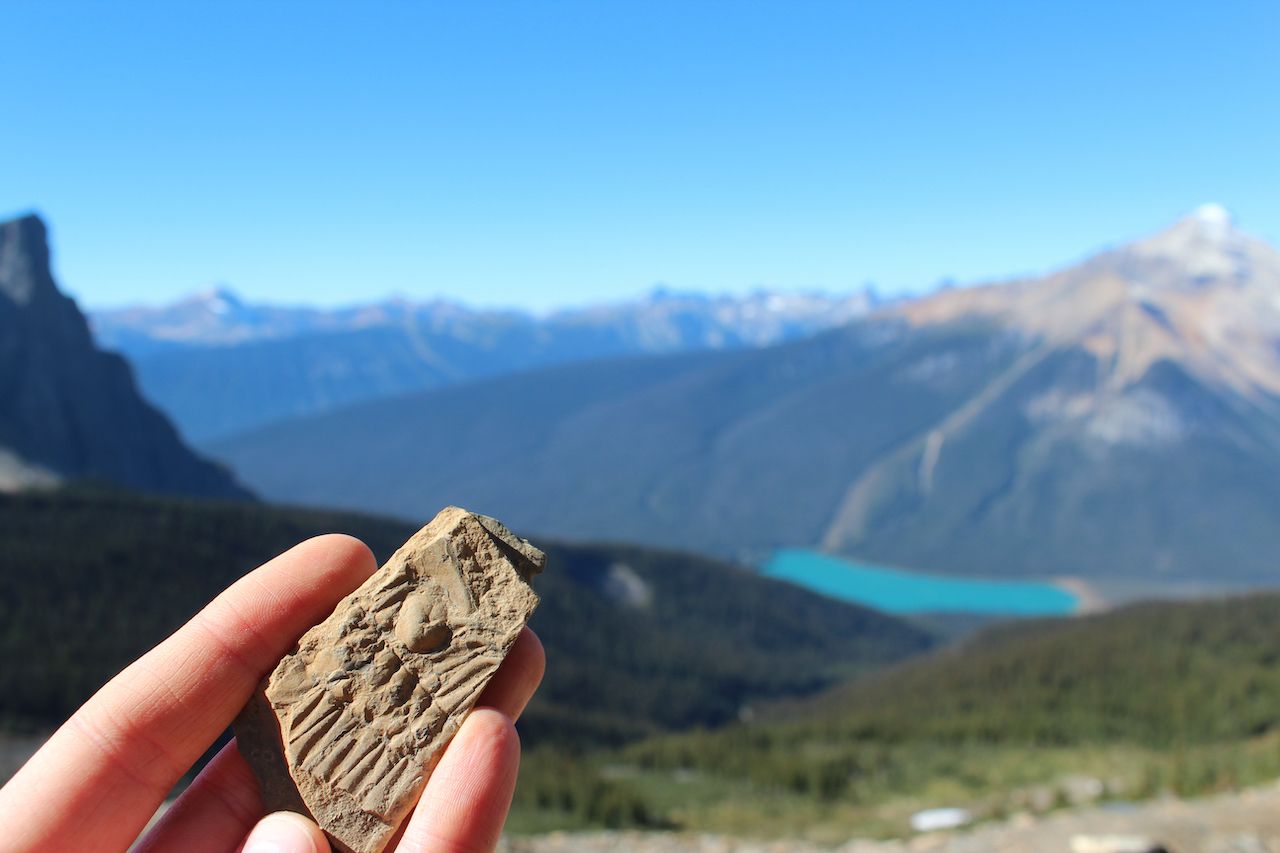 Collecting fossils from national parks and other protected areas is strictly prohibited in Canada, but fossil lovers would be remiss to overlook the Great White North in their quest for petrified prehistoric organisms. Some of the most fertile ground for fossils can be found in Alberta and Ontario, but there are significant deposits in almost every province. Among them, the Burgess Shale in the Canadian Rockies of British Columbia stands out for its exceptionally well-preserved soft-bodied fossils, which have led to major revelations about ancient organisms and helped earn the Canadian Rocky Mountain Parks a UNESCO inscription in 1984.

Amazingly, thanks to the Burgess Shale Geoscience Foundation, these groundbreaking fossils can be seen up-close by the public. The foundation hosts two guided hikes through the otherwise closed fossil beds, neither of which are for the easily exhausted. The 11-hour, 14-mile round-trip excursion to the Walcott Quarry takes fossil lovers up 2,710 feet of uneven terrain, and the price is almost as steep at $126 per person.

If you’re planning a family adventure, opt for the Mount Stephens trek instead, which still manages a 2,610-foot ascent in just five miles out and back and costs between $44 and $99 depending on the age of participants. The seven-hour trek is hardly a cake walk, but the wealth of easily spotted trilobite fossils here makes it ideal for kids. 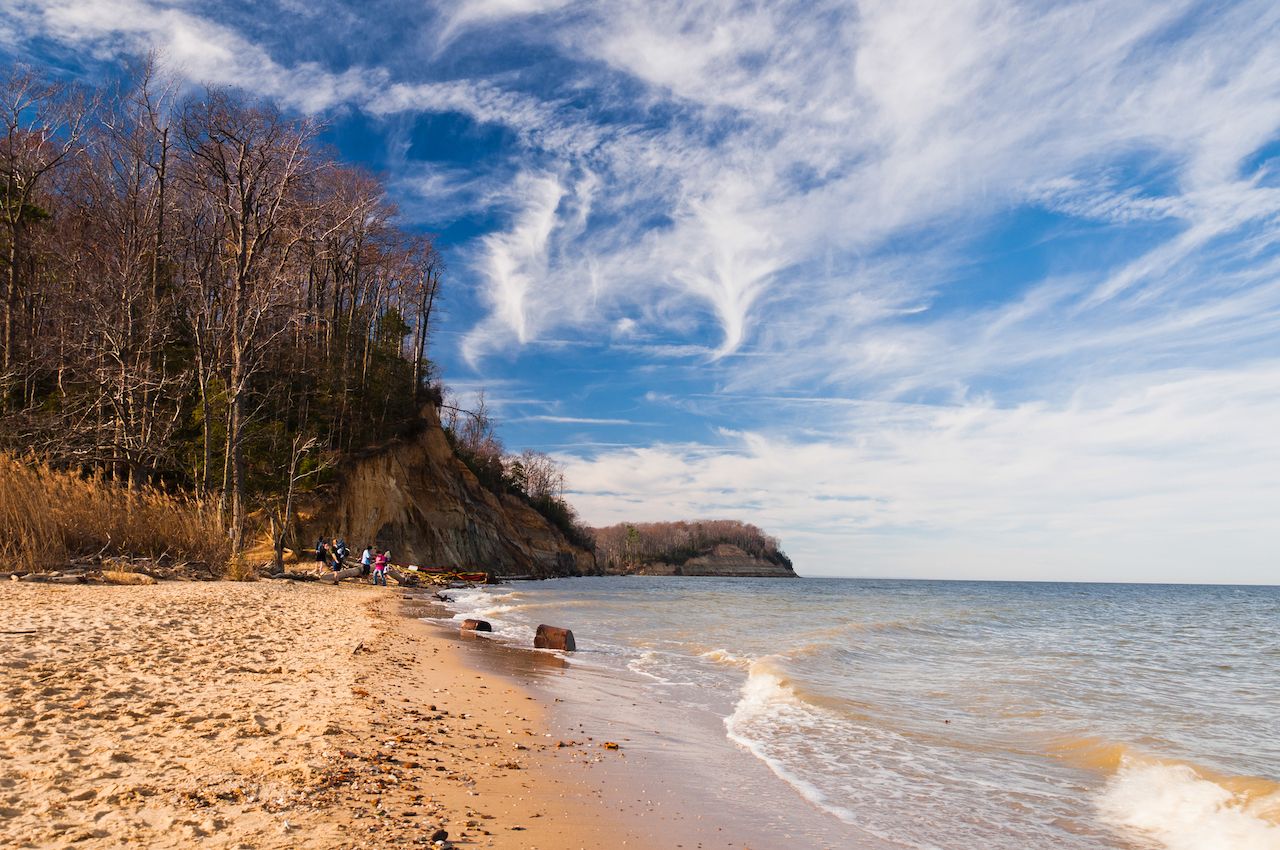 Calvert Cliffs State Park spans 24 miles of the western end of Chesapeake Bay where the cliffs have been accumulating fossils since the Miocene era as far back as 20 million years ago. The area was submerged in warm seawater at the time, making fossilized shark teeth and marine fauna the big draw here, including crocodile, porpoise, whale, oyster, and sea turtle remains. If you’re lucky, you might even stumble across fossils belonging to a mastodon or peccary, ancestors of today’s elephants and pigs respectively, or those of massive, extinct birds whose wingspans measured up to 20 feet across. In total, the fossils of more than 600 species have been collected at the Calvert Cliffs, the largest Miocene fossil deposit on the East Coast. 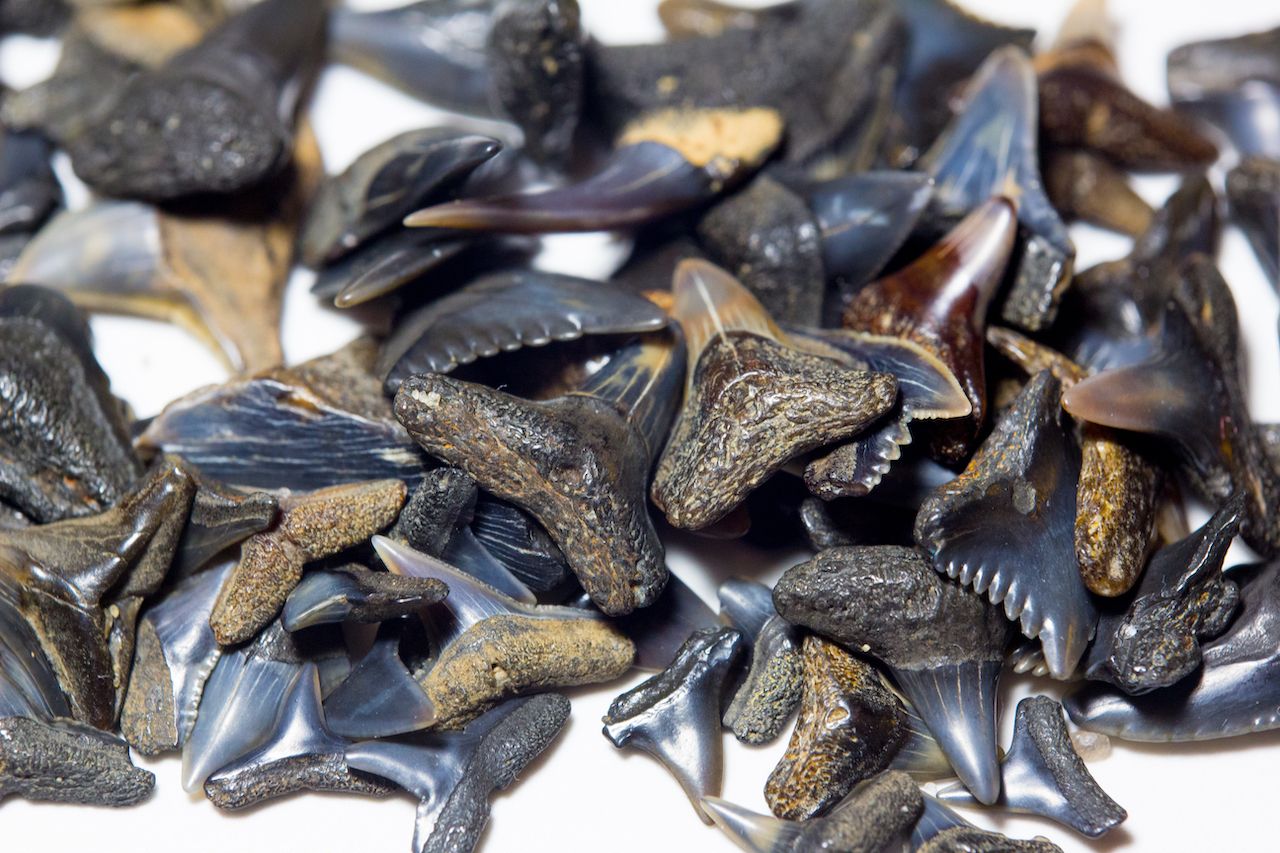 The best place to hunt here is at the end of the red trail, a 1.8-mile stretch leading from the parking lot to a fossil-filled beachfront. Equipment like shovels and sieves are permitted on the beach, but collecting fossils from and directly below the cliffs themselves is prohibited, as well as dangerous given the likelihood of landslides. 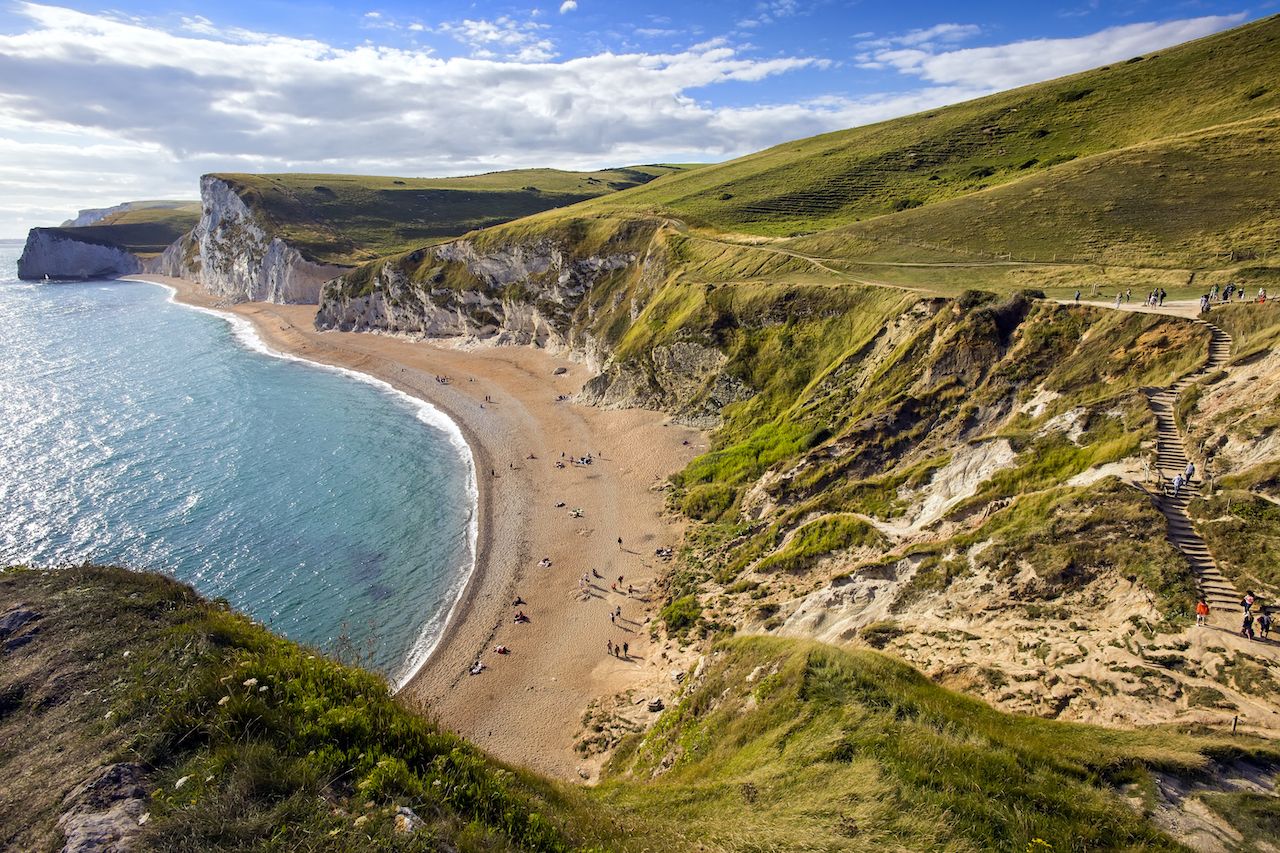 If the name wasn’t indication enough, the Jurassic Coast is rich with fossils. While the UNESCO World Heritage site covers 95 miles of English Channel coastline from Devon to Dorset, budding paleontologists should set their sights on Charmouth where guided fossil-hunting walks are organized by the Charmouth Heritage Coast Centre. The center itself is a great source of information for the sort of fossils you’ll find along the Jurassic Coast, most commonly extinct mollusk and marine species. Many of the species found here are ancient relatives of modern-day squids, clams, sea slugs and snails, octopuses, and cuttlefish. 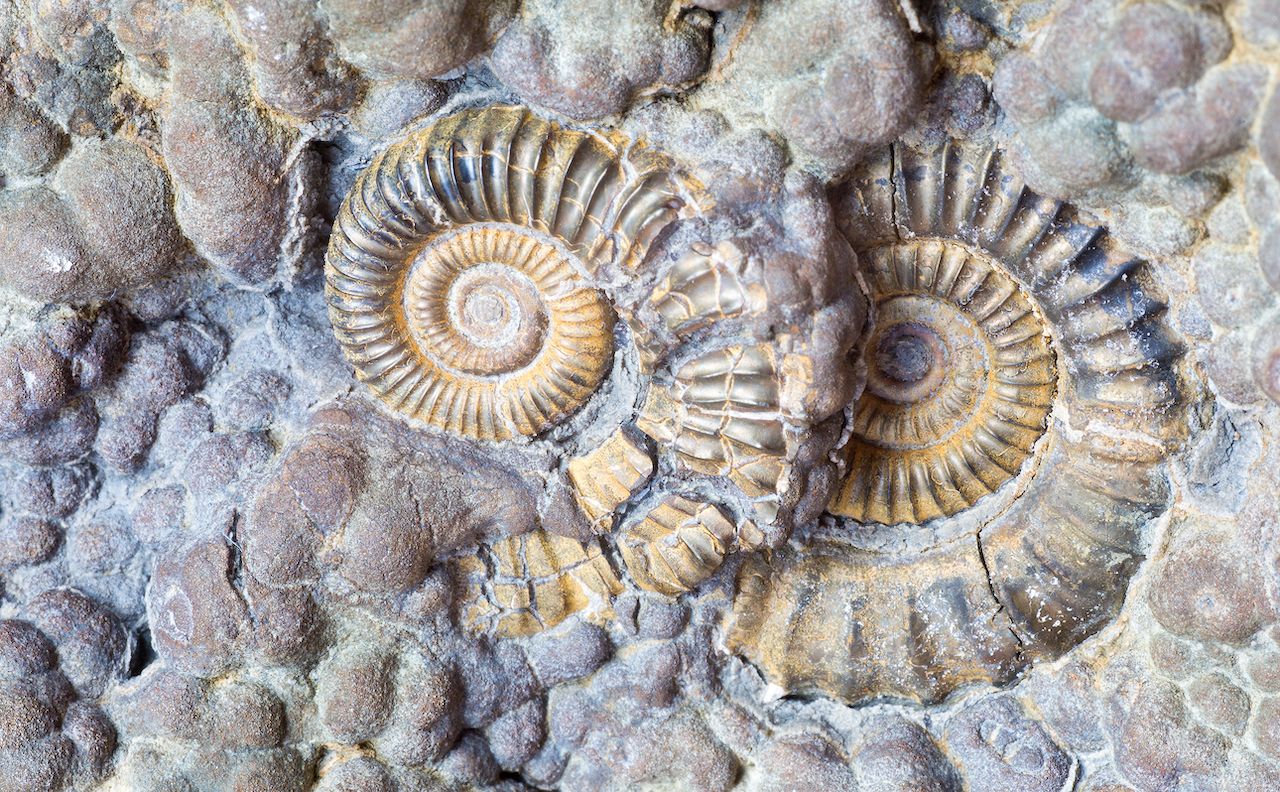 Fossil hunting can be a controversial hobby, but it’s actually encouraged here as whatever relics aren’t collected are likely to be lost to the sea forever. You’re allowed to keep whatever fossils you find (transporting them between countries is a separate issue) though the site asks that all discoveries are disclosed for record-keeping purposes. Just be sure to stick to the beach and stay off the cliffs — climbing here is dangerous. You can read more about the rules of fossil collecting on the Jurassic Coast here. 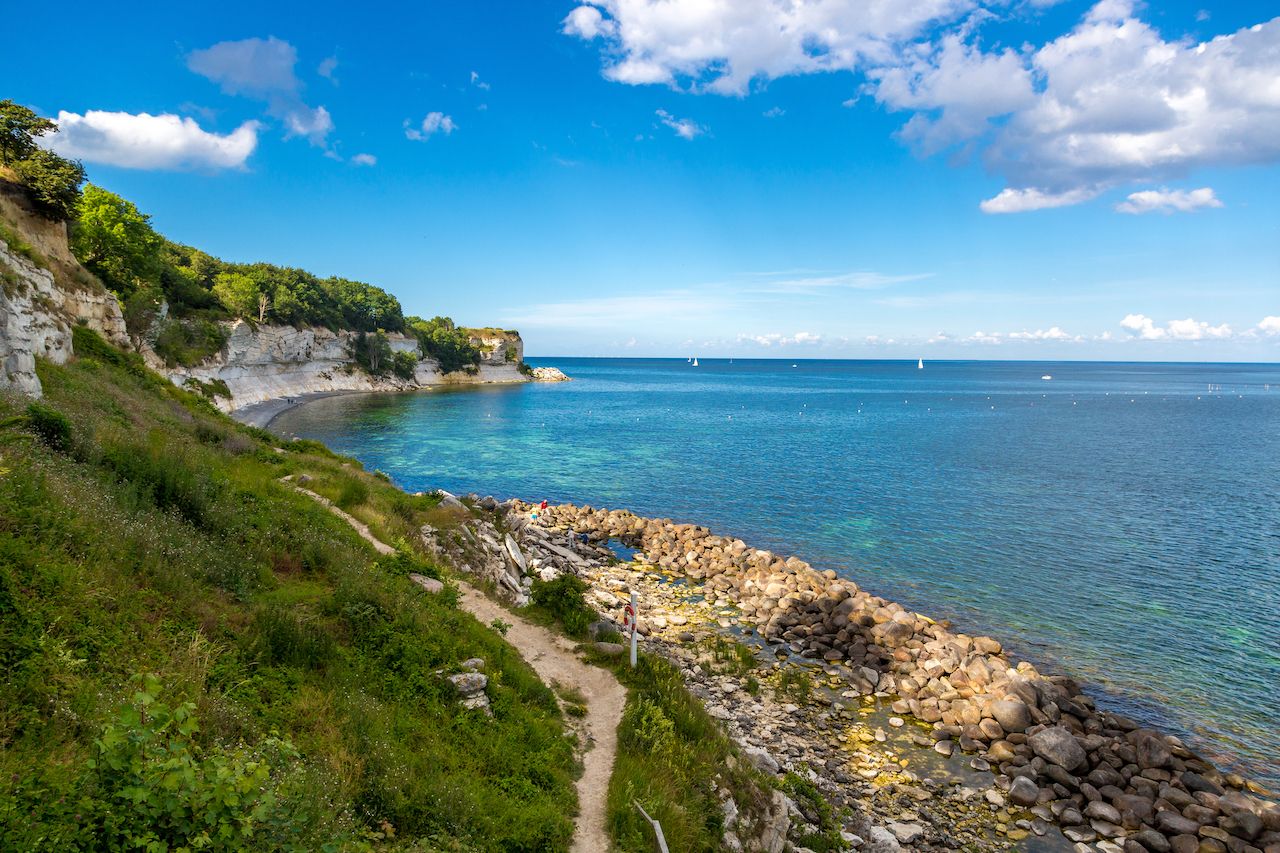 Stevns Klint is a UNESCO World Heritage site spanning nine miles of white chalk cliffs on the Danish island of Zealand. Evidence of the Chicxulub meteorite that’s said to have wiped out the dinosaurs around 65 million years ago abounds here, contributing to its heritage status. Stevns Klint is the first fossil site most people think of in Denmark, but it actually comes in second for fossil hunting. First place goes to Møns Klint on the island of Møns, south of Zealand, which has just under four miles of chalk cliffs and is teeming with fossils. Seriously, you’d have to try pretty hard not to find petrified urchins and belemnites, relatives of present-day cuttlefish, here. 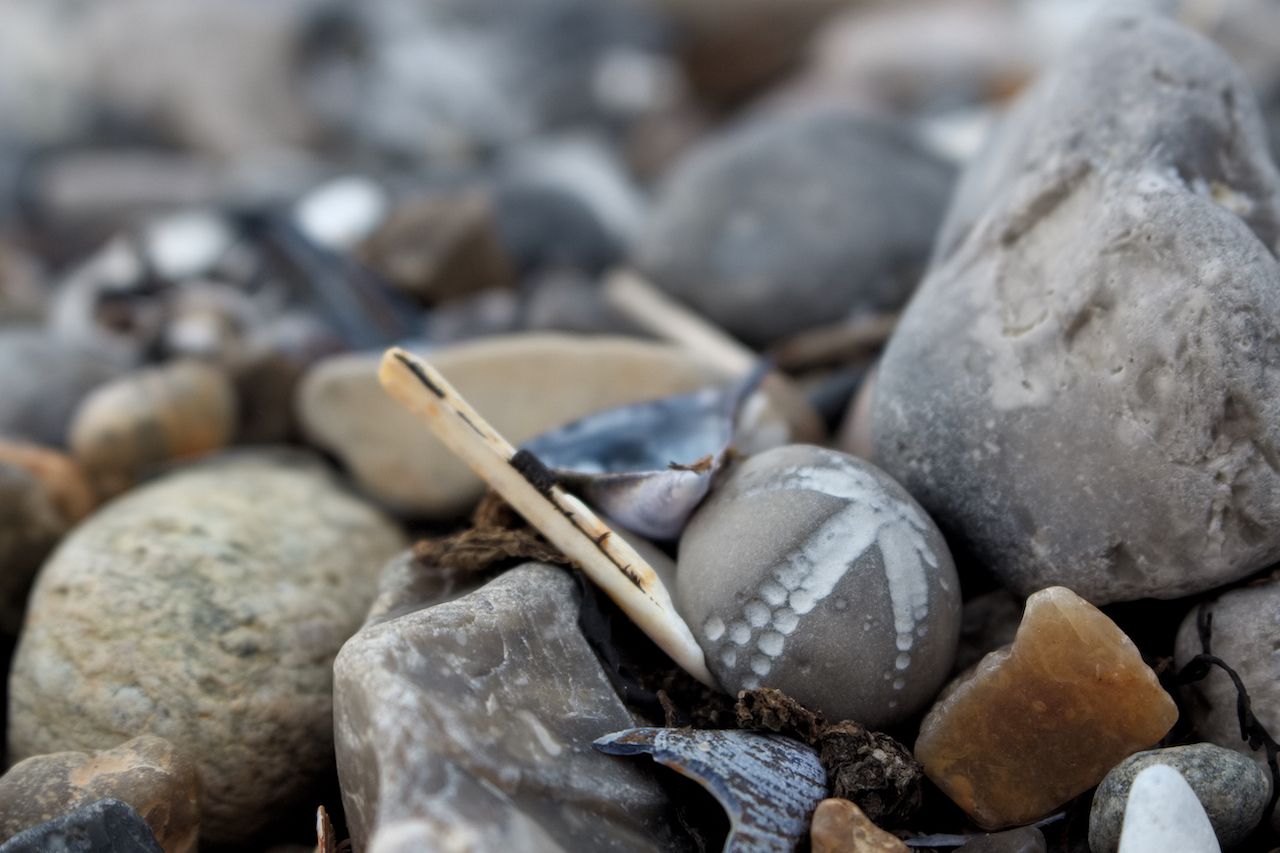 Guided tours of the cliffs are available, but you can also opt to forage for fossils on the beach below. The best routes for collecting are the 1.7-mile northern circular walk from the Geocenter Møns Klint up to the highest vantage point on the cliffs and the 1.4-mile southern circular walk that ends up right on the beach. You can arrange tours of the site through the geocenter, which also has interactive and educational exhibits for kids. 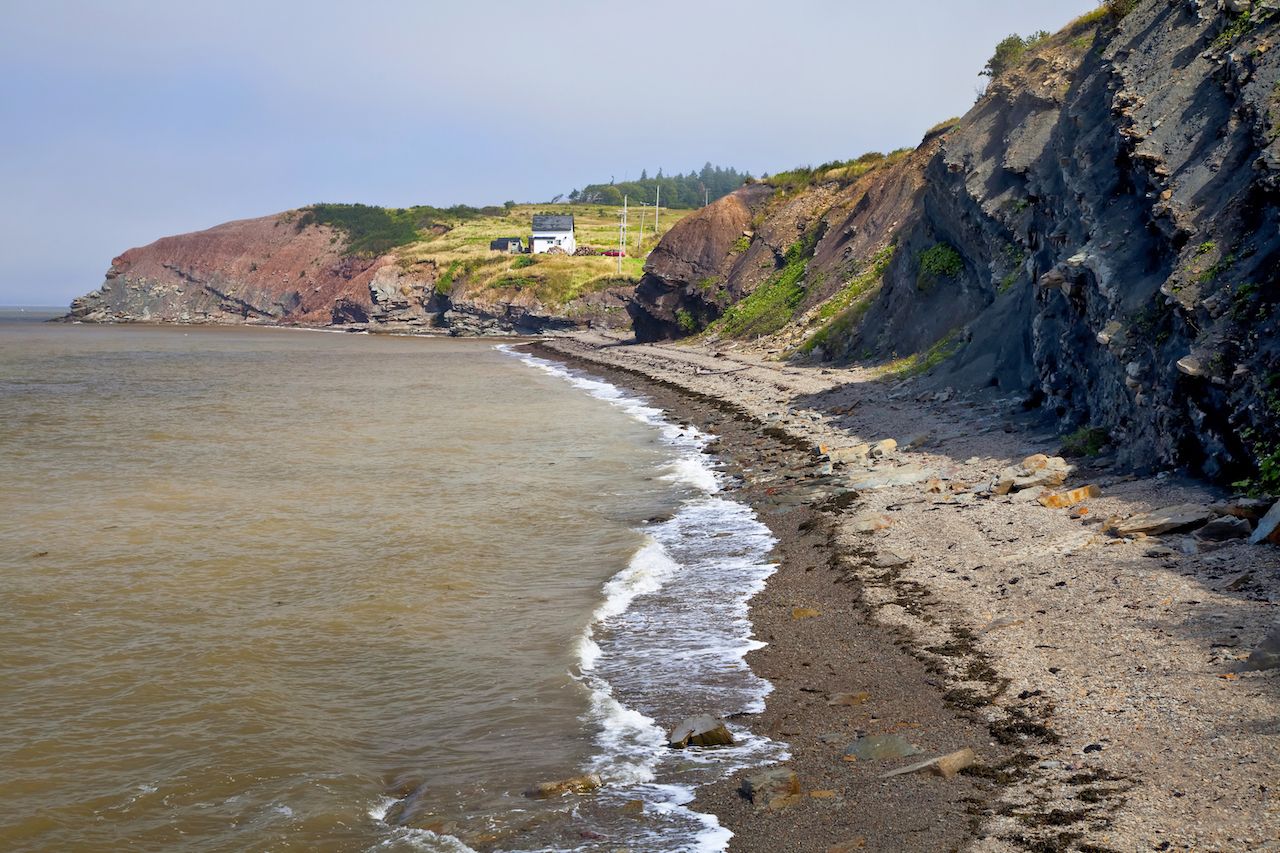 Like the Burgess Shale, the Joggins Fossil Cliffs have been recognized by UNESCO for Outstanding Universal Value due to the rare fossils found there. And much like tours of the Burgess Shale, the visitor focus here is on viewing rather than collecting. The more than 100 fossil species in Joggins date back to the Carboniferous period of around 300 million years ago, sometimes referred to as the Coal Age due to the emergence of coal beds during that time. The most impressive fossils found here belong to ancient amphibians and reptiles, including the remains of Hylonomus lyelli, a lizard-like creature and the earliest known reptile. As the area was covered in primeval forest way back when, petrified flora also abounds. 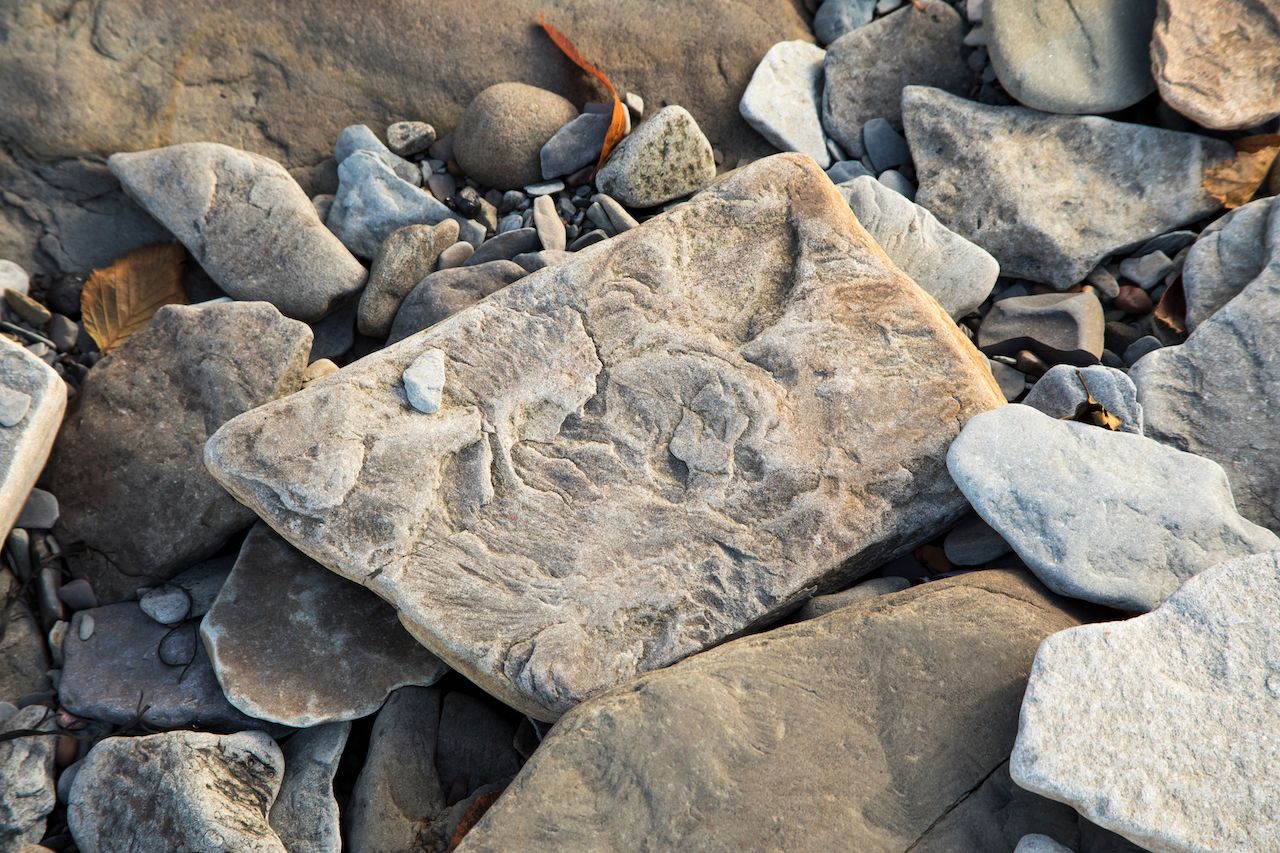 If you want to learn more, book a beach tour with a knowledgeable guide, ranging from 30 minutes to four hours at $10.50 to $75 per adult. You can also opt to tour the Joggins Fossil Cliffs independently, granted only qualified paleontologists with Heritage Research Permits are allowed to collect and keep their finds. Apply here if you have the proper qualifications or else start planning a visually astounding visit to Joggins. 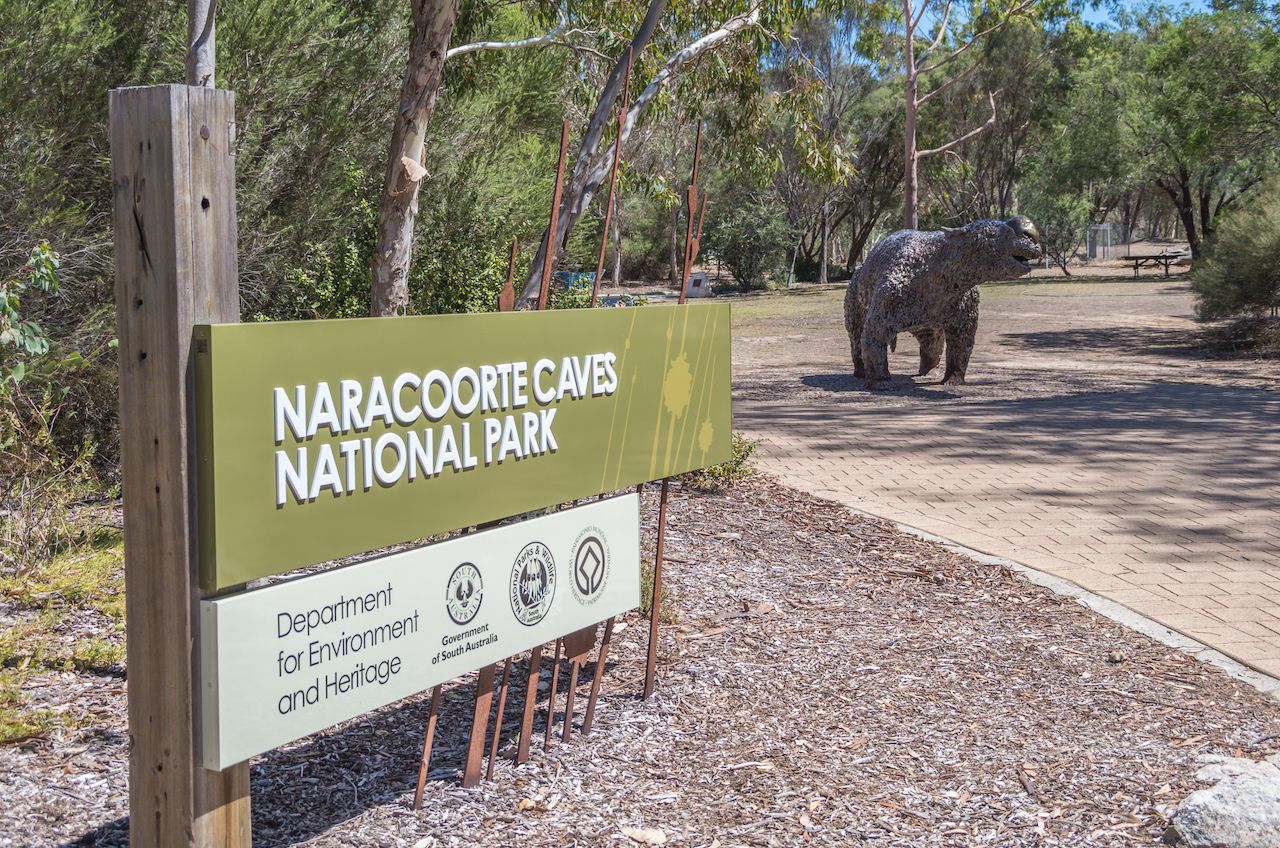 This karst cave system in South Australia has been deemed one of the top 10 fossil sites in the world by UNESCO. Giant marsupials, monitor lizards, and kangaroos once roamed the area, leaving behind fossils that help explain significant stages of evolution. Overall, the Naracoorte Caves are as rich with Pleistocene-era vertebrate fossils as it gets. Many of these ancient creatures have been fully excavated and are now on display within the cave system while others remain preserved in the limestone. Take a guided or self-guided tour of the Victoria Fossil Cave, the most fossil-dense, as well as the Alexandra Cave, known for its stalagmite and stalactite formations. Entrance to Naracoorte Caves National Park is free with guided tours starting at $20 per adult. 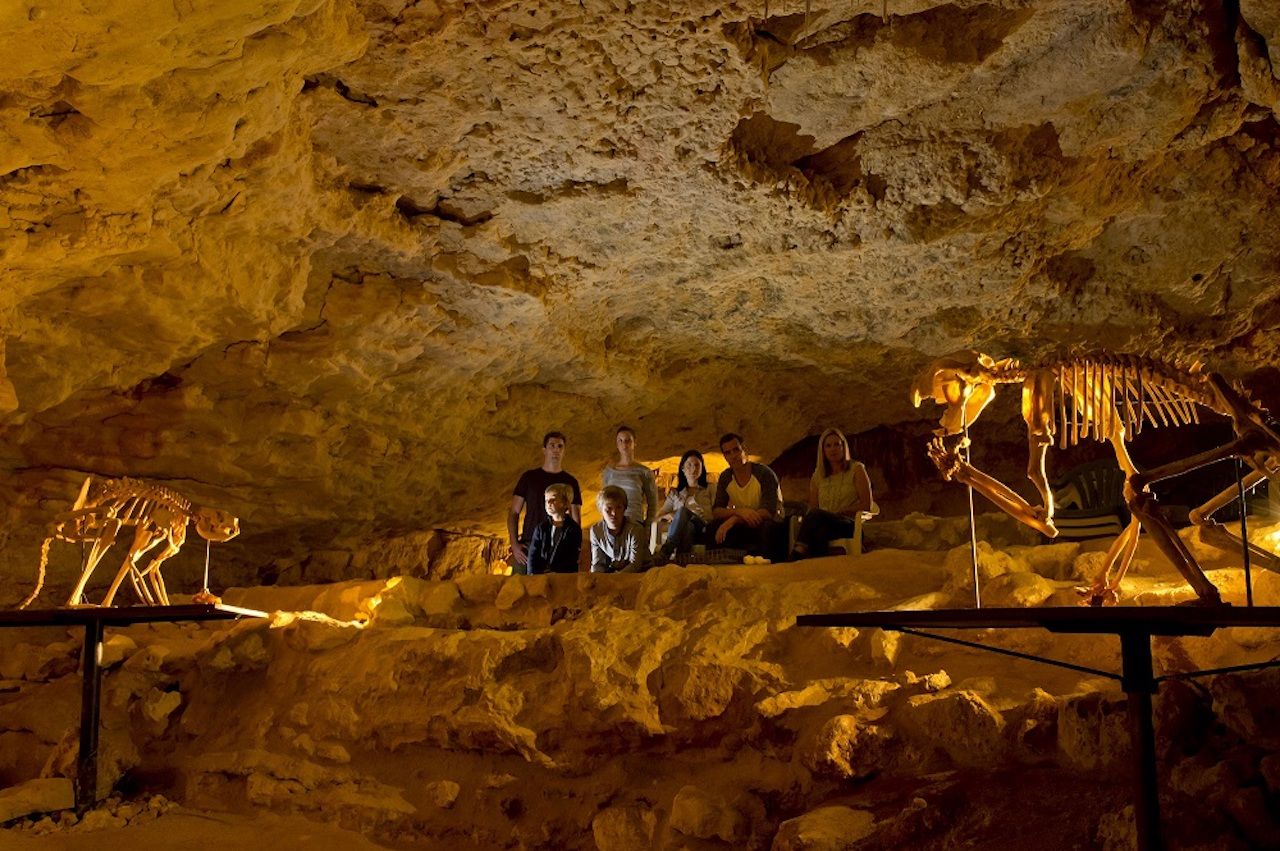 Before you leave, stop by the Wonambi Fossil Centre to see recreations of the massive marsupials that once called South Australia home. It’s a less hands-on fossil hunting experience, but it has the largest number, most diverse, and best preserved fossils of its kind anywhere on Earth.

ArchaeologyArchaeological Digs Around the World You Can Actually Partake in This Year
Tagged
Archaeology Outdoor National Parks Trip Planning
What did you think of this story?
Meh
Good
Awesome