Fossils have long captured people’s imagination. Like a window to life on Earth millions of years ago, fossils are the imprint in rocks of ancient organisms like plants, animals, fungi, and finding one is like winning the paleontological lottery. Luckily for those who like a gamble, there are many places across the US where you can ethically and legally go fossil hunting and even keep your finds.

From trilobites to fossilized plants to dinosaur bones, here are the essential stops for a fossil-hunting road trip across the US. But, before setting off, be sure to check out the paleontology community’s set of ethics regarding collecting fossils, and keep in mind it is always illegal to collect fossils from National Parks and Monuments. 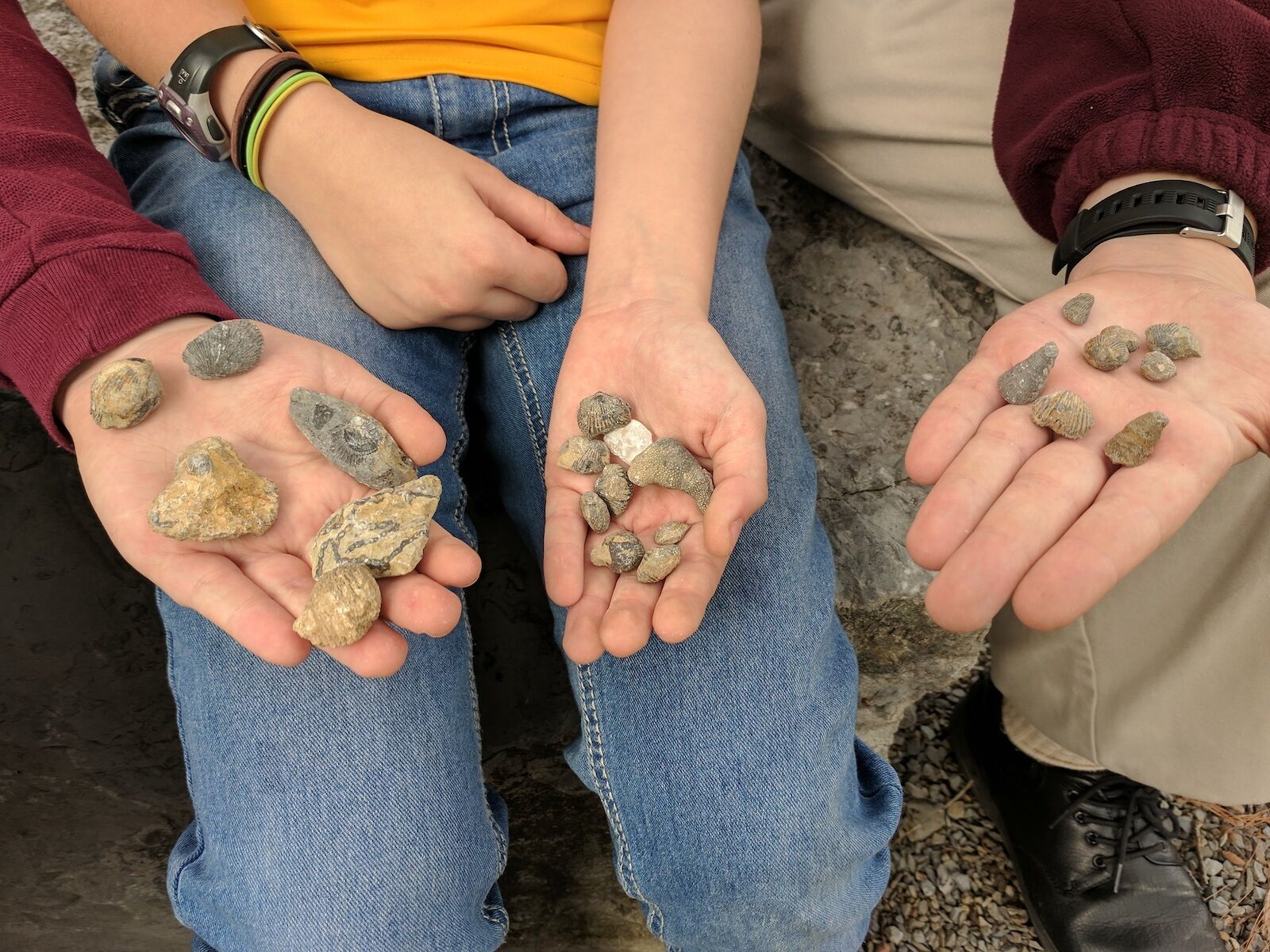 Starting in Pennsylvania, Montour Preserve Fossil Pit is a free fossil collection site open year-round. The site consists of one acre of exposed Devonian Period shale laid down 395 million years ago when Pennsylvania was covered by a shallow sea. Pelecypods (oysters, mussels, clams), cephalopods, crinoids, corals, and trilobites can be found, and visitors can keep any fossils they find. Tools are allowed, and geologists’ hammers, safety goggles, and brushes are encouraged to help break up the shale.

Nearby attractions: Across the road from the fossil pit, Lake Chillisquaque has boating, fishing, walking trails, and wildlife blinds for animal observation. 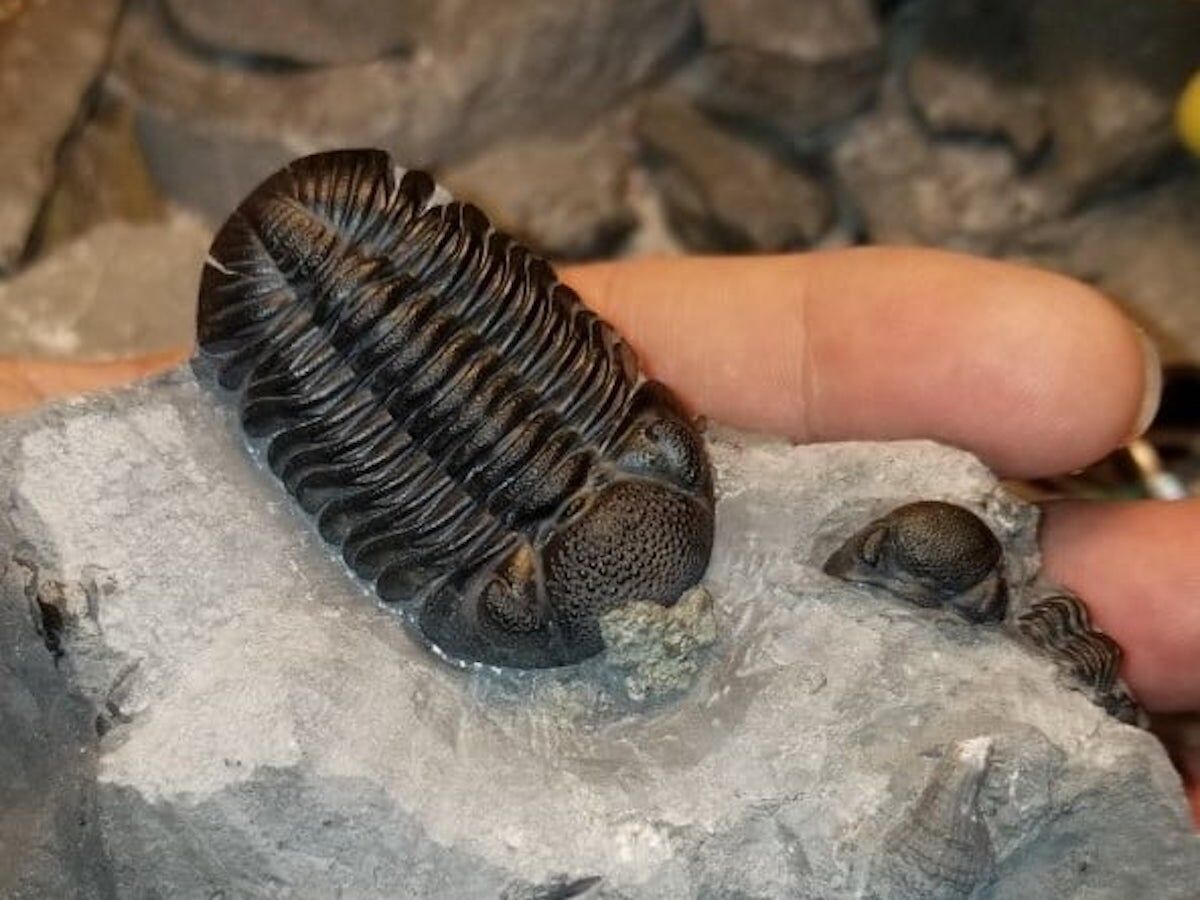 Next up is The Penn Dixie Fossil Park and Nature Reserve, a 54-acre park near Buffalo, New York, that was once an ancient undersea environment. When the area was quarried, layers of 380 million-year-old Devonian Period rock were uncovered, filled with brachiopods, bryozoans, corals, and (famously) trilobites. The park is open from April to October, and there is a $14 entrance fee. Tools are available for rental, and fossils can be kept, though the park asks to photograph particularly fascinating ones. Staff and volunteers assist visitors, and the park is accessible to wheelchairs, with paved paths throughout. There are also Dig With The Experts events every June.

Nearby Attractions: Woodlawn Beach State Park, a mile-long beach on Lake Erie, is just a short seven-minute drive away, and Niagara Falls is 40 minutes north. The Buffalo Museum of Science, as of 2022, has an exhibit on dinosaurs in Antarctica. 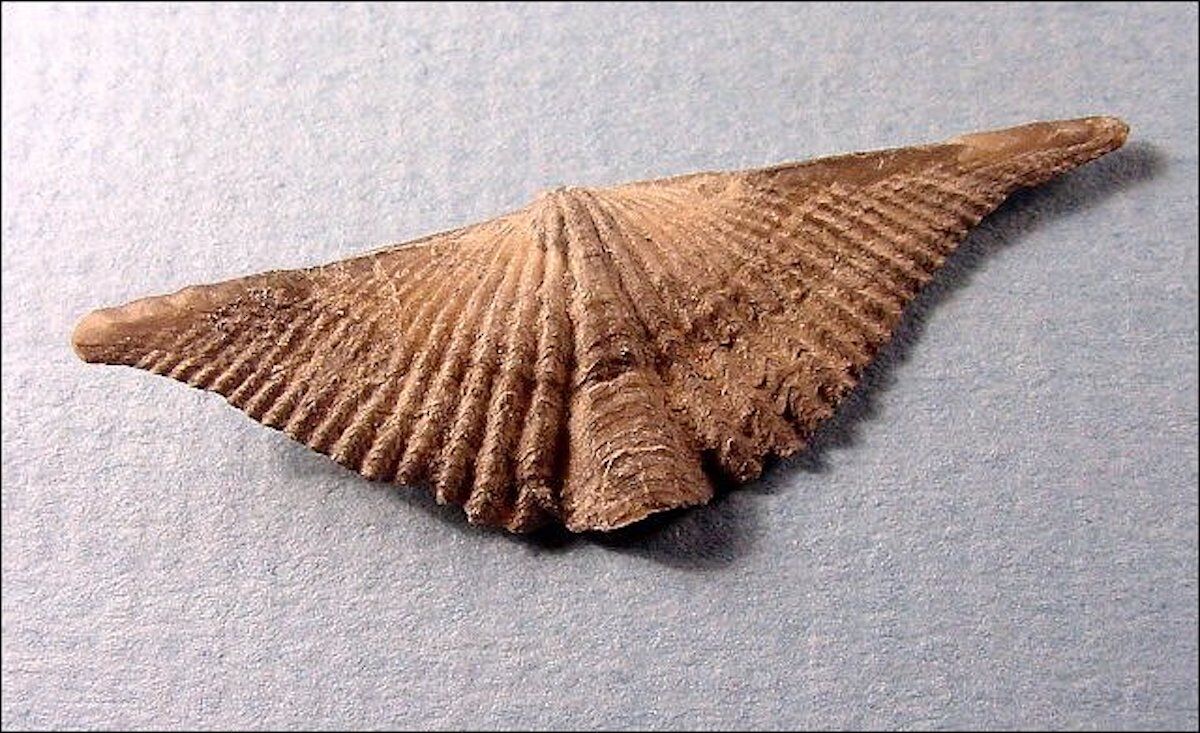 Moving west, Olander Fossil Park in Ohio is a free, wheelchair-accessible site that is open from mid-April to late October. The park is a five-acre rock quarry consisting of Devonian Period shale, deposited 375 million years ago when northwest Ohio was under a shallow sea. Over 200 prehistoric life species can be found, including trilobites, brachiopods, and corals. Visitors can keep fossils, but no tools are allowed; the shale is soft enough to break apart with your hands.

Nearby Attractions: Fossil Park has biking and walking trails. The Paulding La Farge County Community Fossil Garden, a parking lot used as a dumpsite for a nearby quarry, is located an hour southwest and has Devonian shale with trilobites, brachiopods, and corals.

Quarry Hill Nature Center in Minnesota has two quarries open year-round, where visitors can look for fossils. The fossils are in Platteville limestone layers laid down when southeastern Minnesota was covered by an ocean 450 million years ago. Brachiopods, trilobites, cephalopods, and gastropods can be found, and visitors can keep any fossils they find as long as they fit in the palm of their hand. The Nature Center also has a fossil guide to help with fossil identification, and three large cephalopod fossils are visible in the limestone floor of the new quarry.

Nearby Attractions: Quarry Hill is also known for birding and geocaches. The Nature Center also has a museum and animal center with 35 species of native animals. 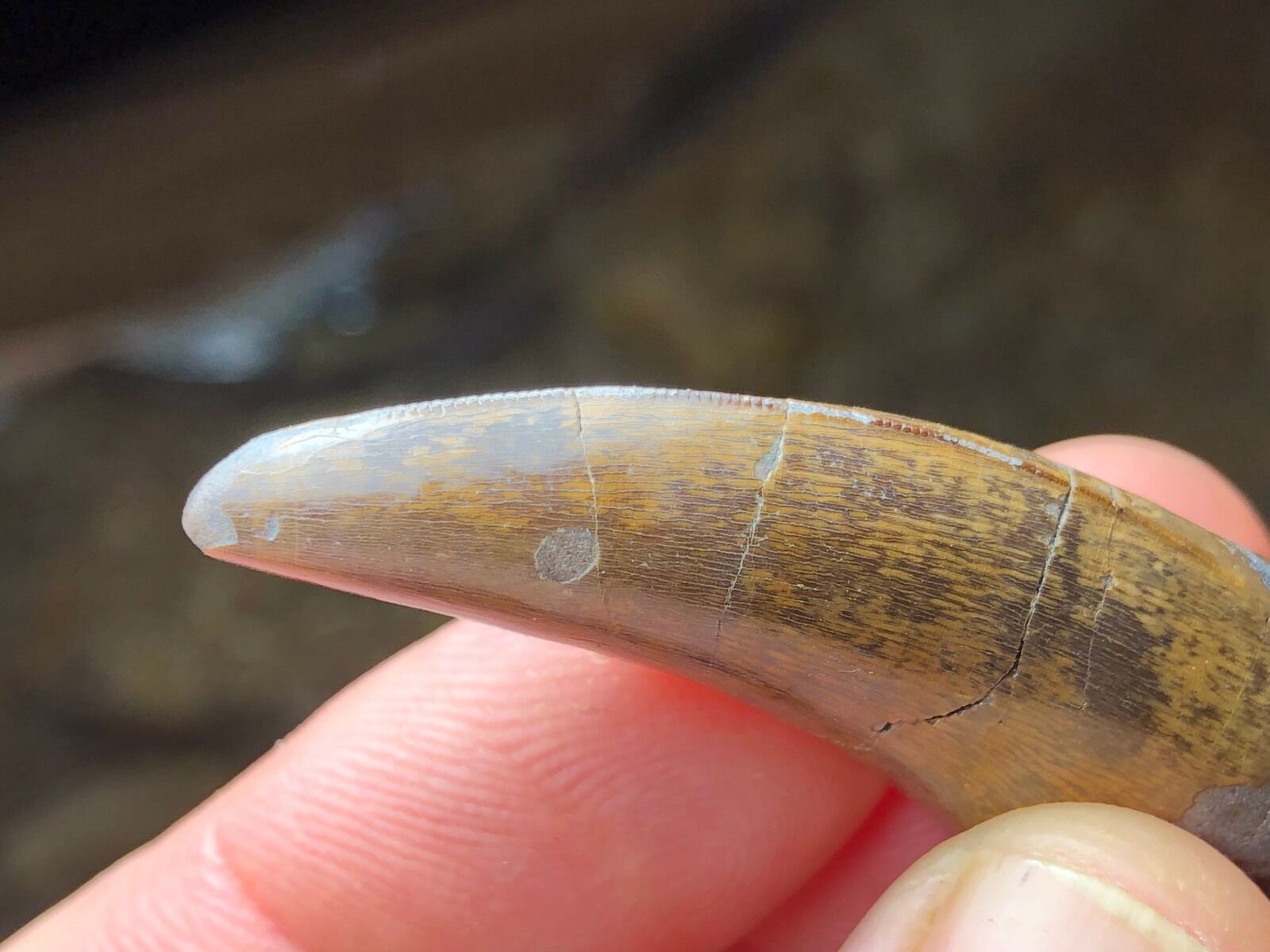 PaleoAdventures in South Dakota offers guided, full-day field trips from March through September. Operating from their field station in Belle Fourche, PaleoAdventures takes visitors to dig for fossils on private ranches. Unlike the other sites, Paleoadventures specializes in dinosaur fossils, particularly fossils from the Late Cretaceous Period (100 to 66 million years ago), such as bones and teeth from T.Rexes and Triceratopses. All tools and gear are provided, as well as expert instruction. Visitors can keep any common fossils, such as Triceratops teeth and unidentifiable dinosaur bone fragments. Fossils that have scientific significance are either sold or donated to universities and museums. A dig day is $175 per person and the days often fill up before the season starts, so early booking is essential.

Nearby Attractions: Badlands National Park and the Black Hills are just two hours away. The Mammoth Site is also two hours south and features a museum and an active paleontological excavation site.

Florissant Fossil Quarry in Colorado is open from Memorial Day to Labor Day, with an entrance fee of $15. The quarry was an ancient lakebed during the Eocene Epoch, 34 million years ago. Ash from a volcanic eruption trapped layers of living animals and plants in shale, and now fossilized insects, plants, small animals, and fish can be found. Fossils can be kept, though any finds of scientific significance, such as the fossil of a new species of shorebird found in 1997, are donated to the National Park Museum. Staff at the quarry provide tools and instruction.

Nearby Attractions: Florissant Fossil Bed National Monument, which does not allow digging, is a great place to visit before going to the quarry to learn about the geographic history and fossils in the area. The Rocky Mountain Dinosaur Resource Center is 20 minutes away and features world-class exhibits of dinosaurs and prehistoric reptiles, and has a working fossil laboratory.

Warfield Fossil Quarries in Wyoming are open from Memorial Day to the end of September. The quarries feature rock from the Green River Formation and are known for their fossilized fish Visitors can keep all common fish fossils, but rare species such as stingrays, turtles, reptiles, and mammals stay with the quarry. An hour of digging is $30 per person, and all tools are provided, as well as a guided lesson.

Nearby Attractions: Fossil Butte National Monument is 30 minutes away and a perfect place to stop before heading to the quarry to learn about the geology and fossils in the area. Blue Moon Quarry is also six miles west of Kemmerer and is open from mid-April through October. 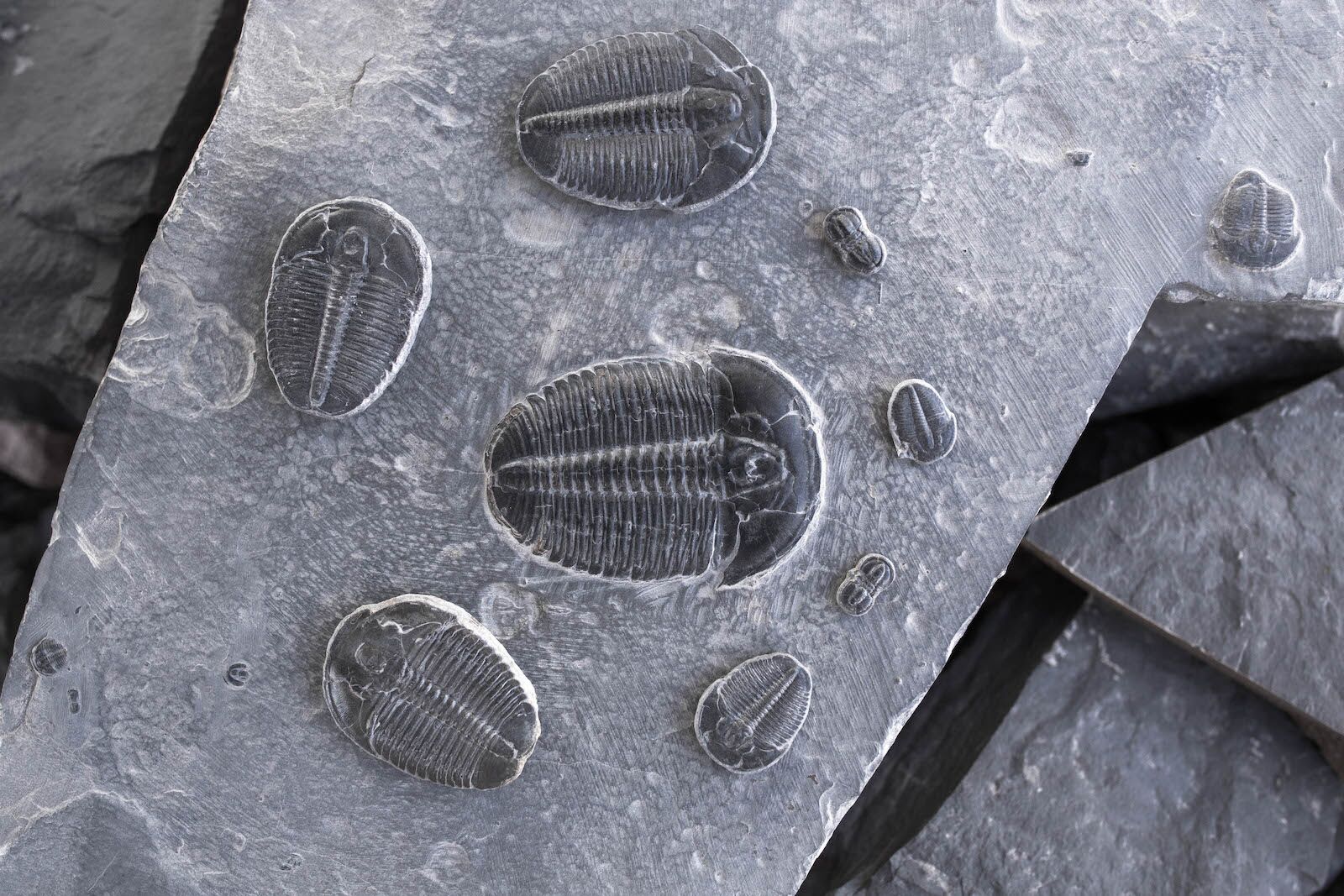 U-Dig Fossils in Utah, open from March to October, is a remote, 40-acre park with limestone shale from the Cambrian Period that is 500 million years old. The park is famous for its trilobites and is one of the most prolific trilobite sites in the world. For an hourly fee, visitors are provided tools and instruction and can keep any fossils found. The staff on-site will also help with polishing fossils.

Nearby Attractions: The U-Dig site is surrounded by BLM land with primitive camping. Utah deserves its own fossil road trip; if you have time, visit the state’s numerous dinosaur museums and dinosaur track sites.

Boot Hill Fossil site in Washington is a great place to end a road trip. The site is open May through September and features Eocene Epoch shale from 50 million years ago. The area was once a lake bed that was filled with volcanic ash, trapping animals and plants in the layers. Fossils of leaves, flowers, fish, and insects can be found. Finds are identified by staff members, and any discoveries of scientific value must remain at the site. Visitors can take three fossils home, and there are tools for rent. The Stonerose Interpretive Center on-site is wheelchair accessible.

Nearby Attractions: Curlew Lake State Park, an 87-acre park, is just down the road and has fishing, birding, and camping.

Road TripsThis US Road Trip Will Take You To the Best Places To Dig for Gems
Tagged
Archaeology Road Trips United States
What did you think of this story?
Meh
Good
Awesome