The western coast of the United States has brought down its fair share of ships, either from poor weather, unmarked reefs, or shorelines that gained elevation just a little too quickly for older ships to avoid. On top of that, many of the best shipwrecks on the West Coast were internationally sunk (after being cleaned, of course) to create reefs for marine life.

The best thing about the West Coast shipwrecks below is that you don’t have to be a scuba diver to see most of them. Sure, some of the wrecks around San Diego will require a certification, but some of these shipwrecks are viewable from shore or easy to access if you sign up for a snorkel tour or — wait for it — an hour-long ride on a tourist submarine. In fact, seeing most of these West Coast shipwrecks won’t even require you to get your feet wet.

Oh, and if you’re more about the history and artifacts than the ships themselves, you’ll want to check out some of these area museums near the wrecks.

In California, from south to north, you’ll find the San Diego Maritime Museum, which has everything from exhibits on pirates and sea monsters to full-sized historical replicas; the Los Angles Maritime Museum, a smaller but packed museum with a huge naval history section; the San Francisco Maritime Historic Park, with rangers that sing sea shanties housed in a noted historical building; and the Humboldt Bay Maritime Museum, with a great exhibit on shipbuilding (and shipwrecking).

In Hawaii, you’ll want to visit the Bishop Museum of Hawaiian history and culture in Honolulu or, of course, the Pearl Harbor National Historic Landmark to learn about naval history and ships. In Oregon, the Columbia River Maritime Museum, Cannon Beach History Center and Museum, and the Oregon Maritime Museum in Portland tell the fascinating history of the roughly 2,000 ships sunk in the state’s waters since the mid-1700s. 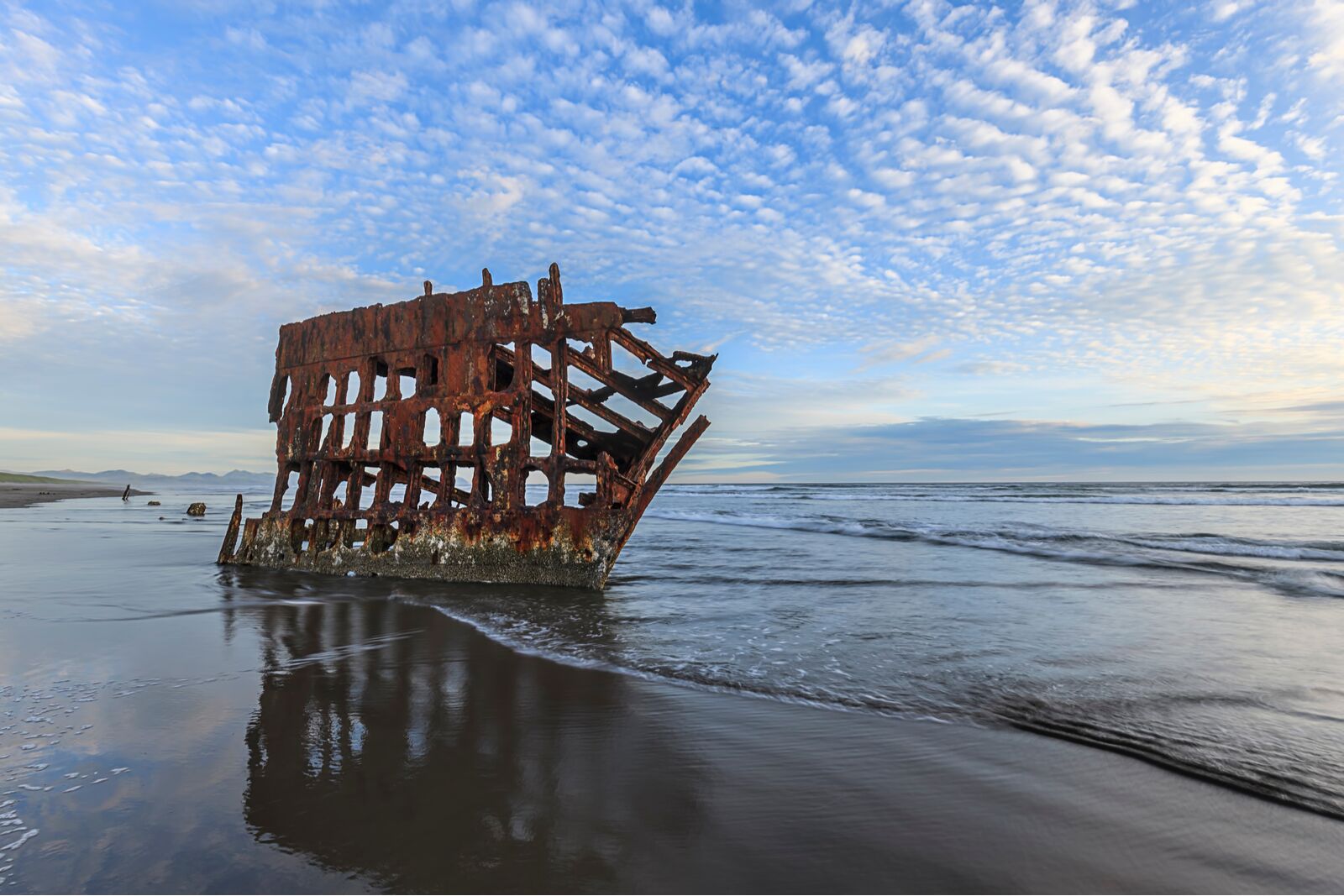 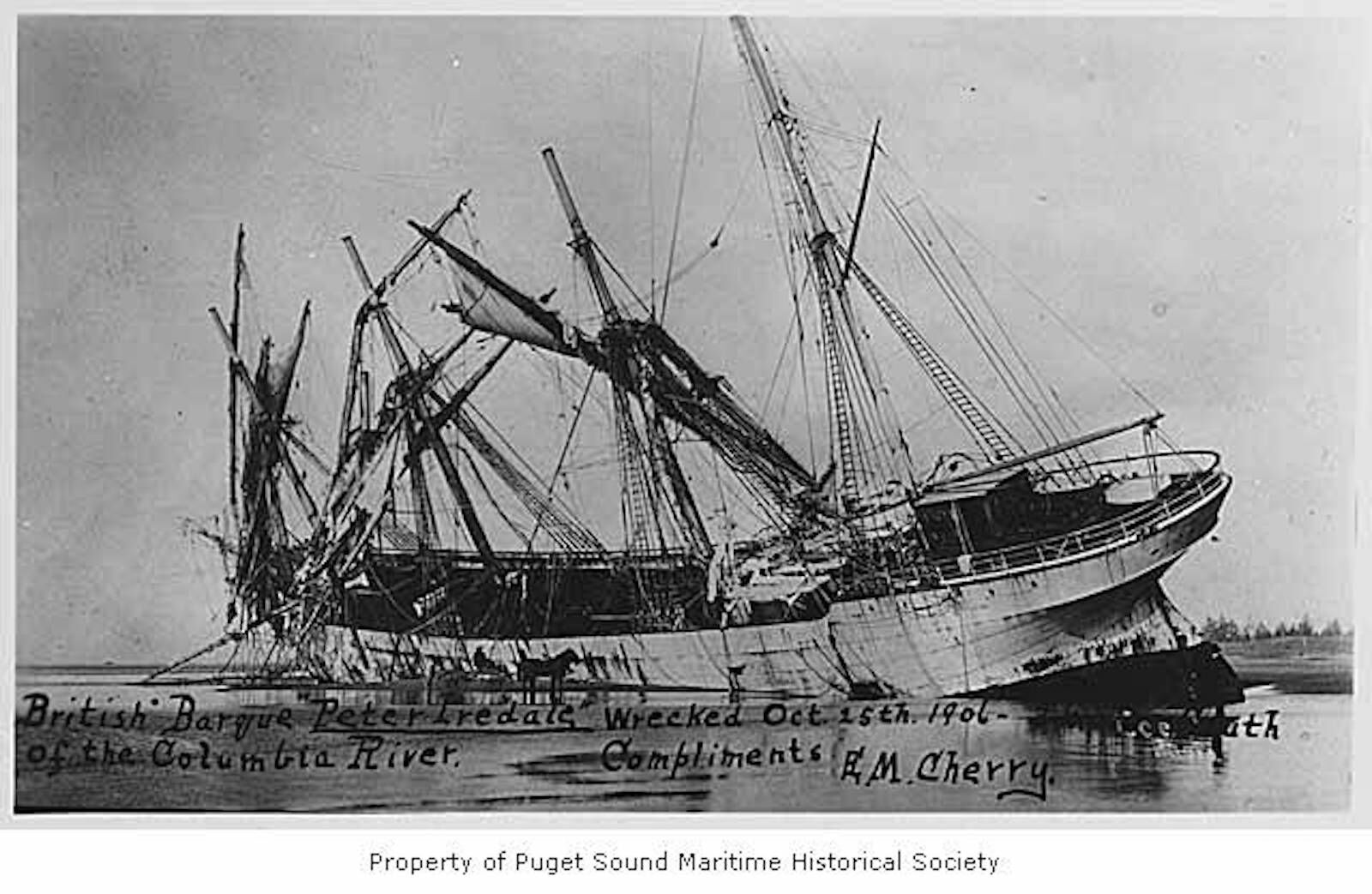 The Peter Iredale is one of Oregon’s most popular backdrops for epic photoshoots as it sits in the sand at Fort Stevens State Park and is easy to reach. When it was built way back in 1890, the ship was 285 feet long and had four huge masts to help it make long ocean crossings. It’s mostly steel, which probably explains why so much of it is still visible despite being run aground more than 100 years ago, in 1909. The ship was attempting to enter through the mouth of the Columbia River — an area known for strong waves and swells from the river water colliding with ocean water. Add in low light, strong winds, and a bit of fog, and it’s not surprising that the ship ran aground in its current location. Unfortunately, the weather didn’t subside very quickly, and the Peter Iredale was too far buried in the sand by the time conditions were favorable enough to salvage the ship.

That was bad news for the ship’s owners but great news for visitors, who can see the shipwreck by taking just a quick walk from the park’s parking lot. Go at low tide, and be prepared to wait for a while if you want the beach to yourself for photos — it’s a popular spot.

By the way: the area around the Columbia River is known as the “Graveyard of the Pacific” due to how many ships crashed in the hard-to-navigate waters. In 2022, most of the Columbia River Maritime Museum will be devoted to a huge exhibit on shipwrecks, which should be on view for at least a few years. 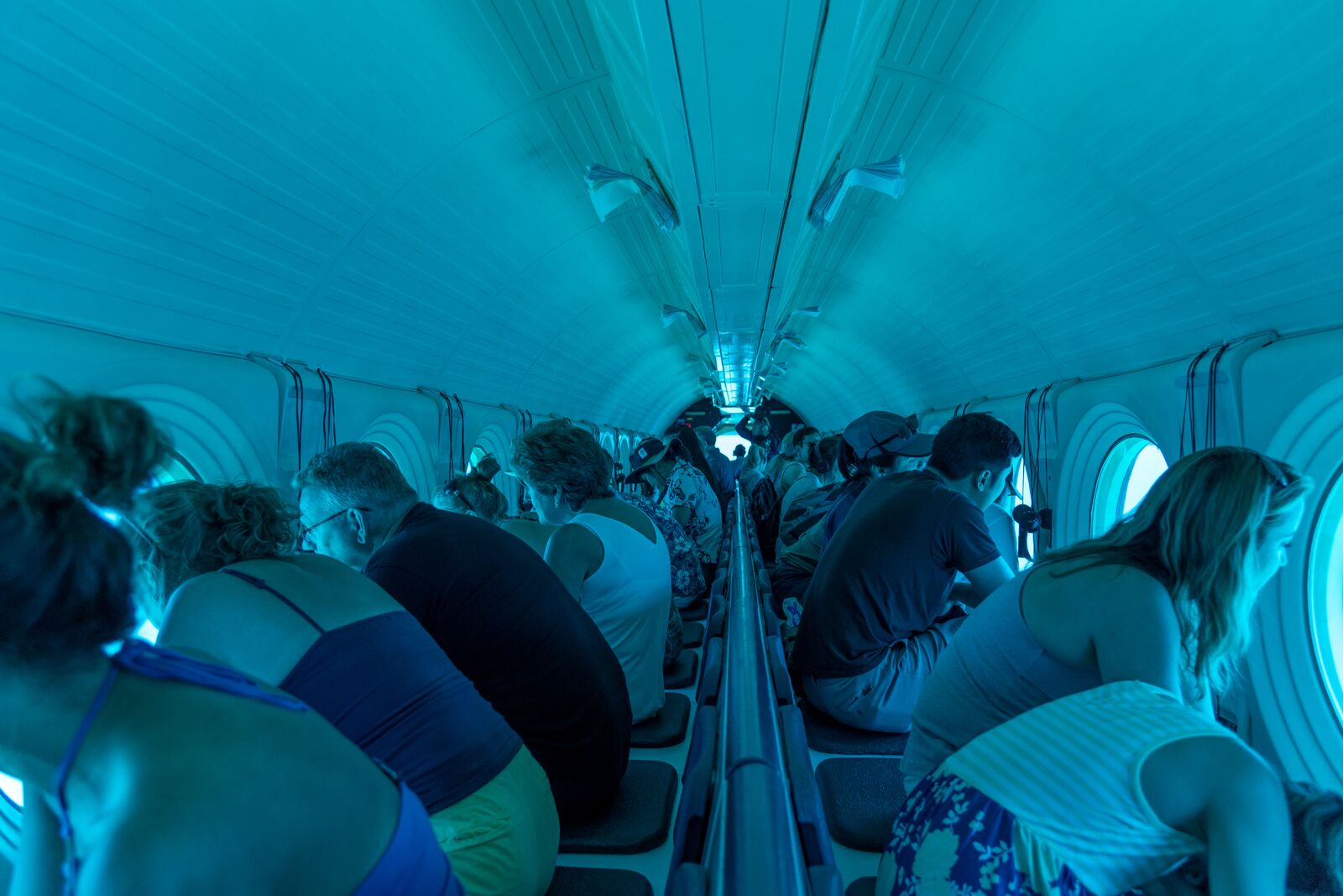 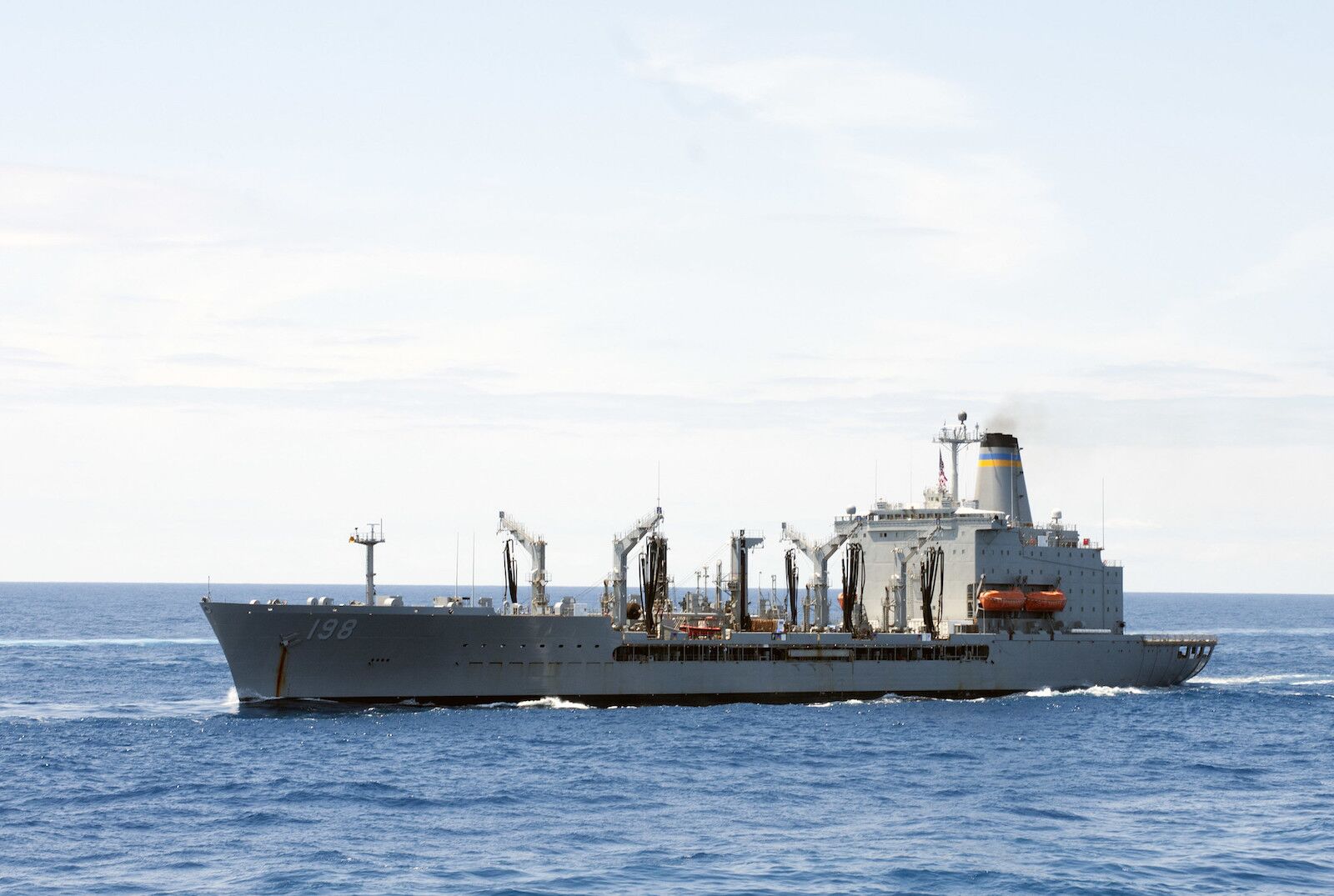 The YO-257 looked similar to this Big Horn Class oil tanker. Photo: US Navy/Public Domain 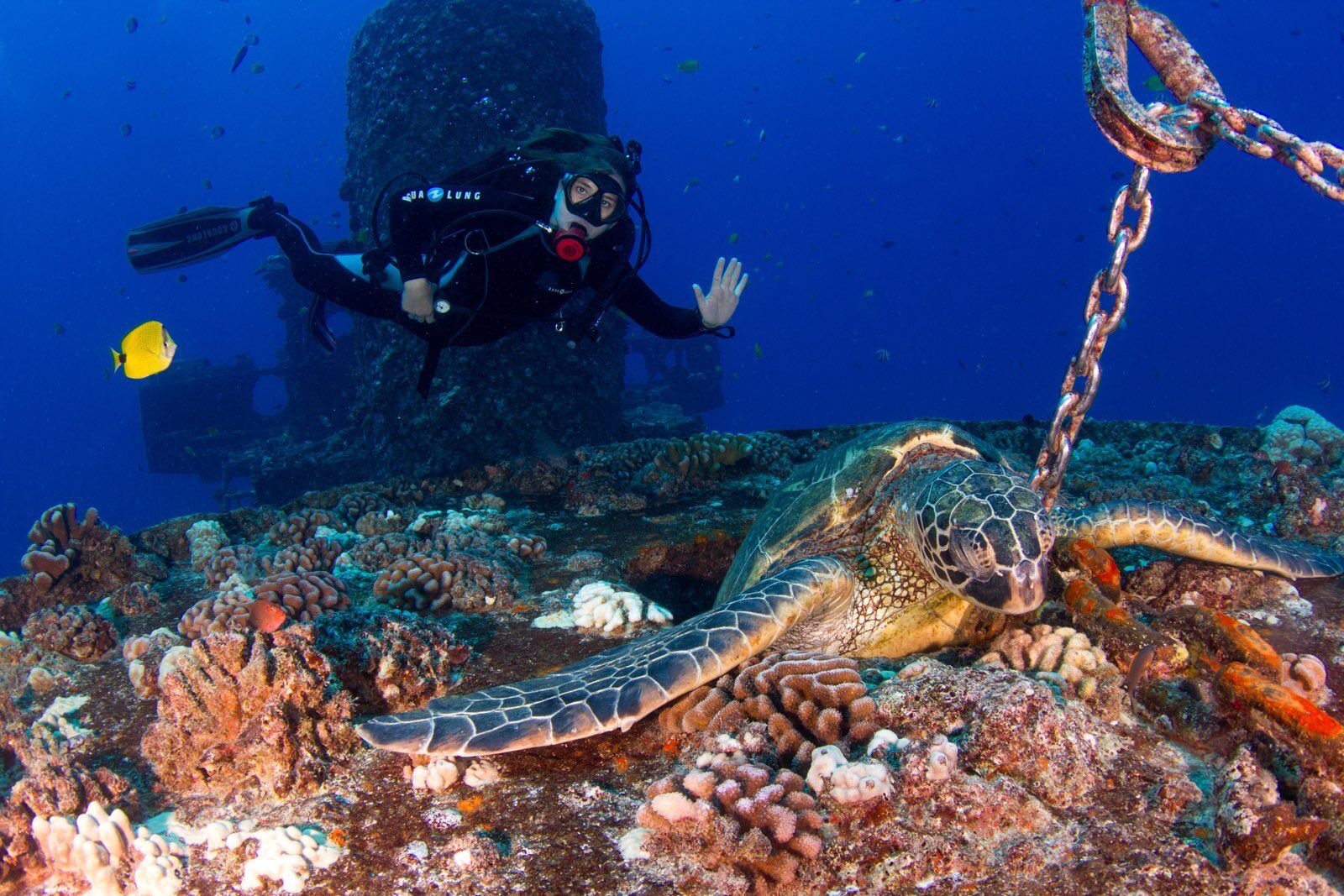 The YO checks a lot of boxes when it comes to shipwrecks. It’s large, fairly intact, and easily accessible even if you don’t dive. Amazingly, you don’t even have to get wet. The YO was sunk intentionally by Atlantis Submarines, a company that runs submarine tours in Waikiki. The YO is a former oiler for the US Navy and is about 175 feet long, sitting about 75 feet deep at its shallowest point and 115 feet at the deepest. It’s a hugely popular site for scuba divers, so don’t be surprised if you see divers on the ship (or, if you’re a diver, don’t be surprised if a submarine comes out of the water and starts circling you). The water visibility is pretty good at an average of 80 feet, though, of course, the deeper you go, the murkier it gets.

The YO served in World War II and the Korean War, but it ended its career in one piece. After being thoroughly cleaned to ensure it wouldn’t pollute the ocean, it was dragged out to its current site and sunk in 1989. In addition to coral and schools of tropical fish, visitors can usually see large sea turtles around the bow. 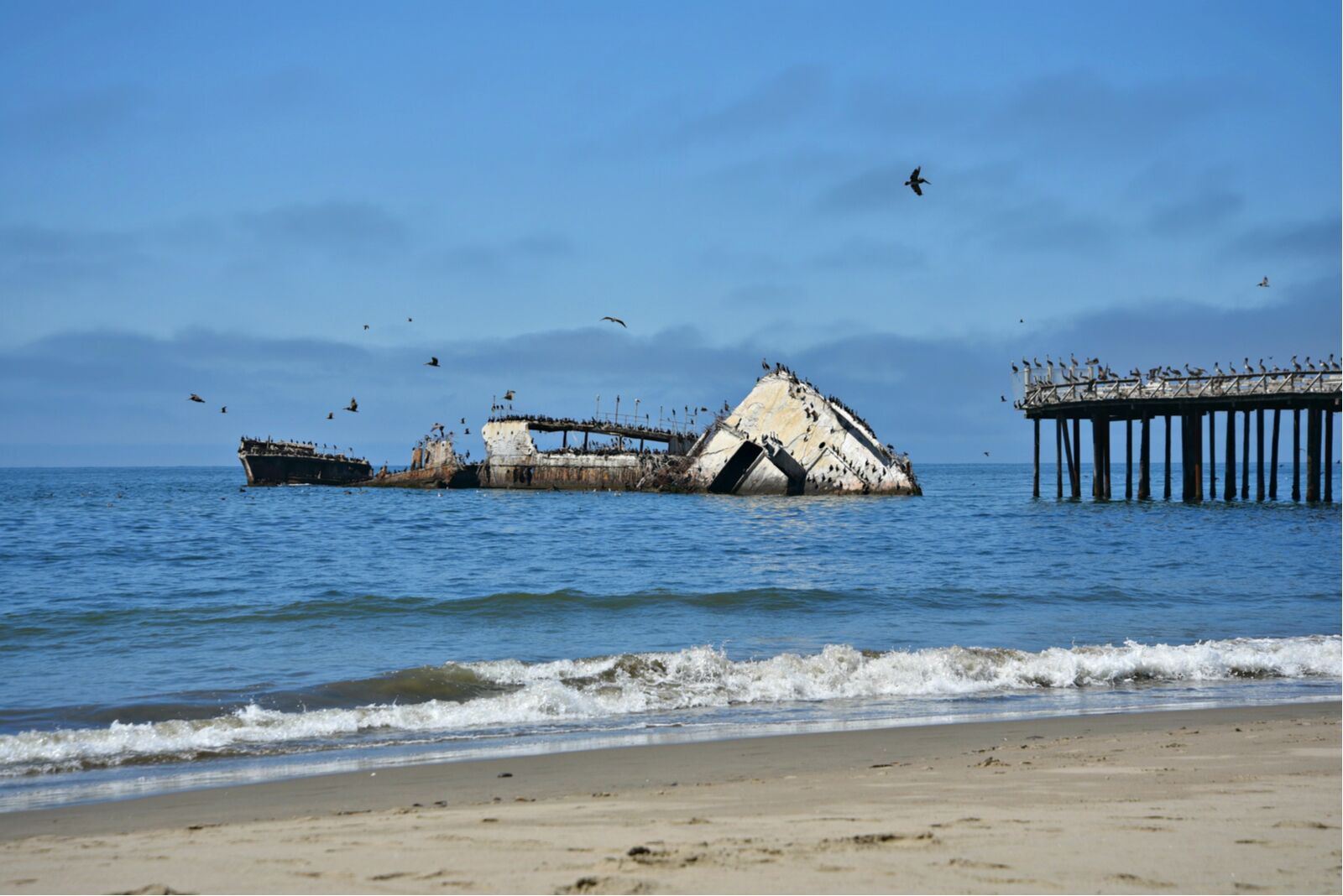 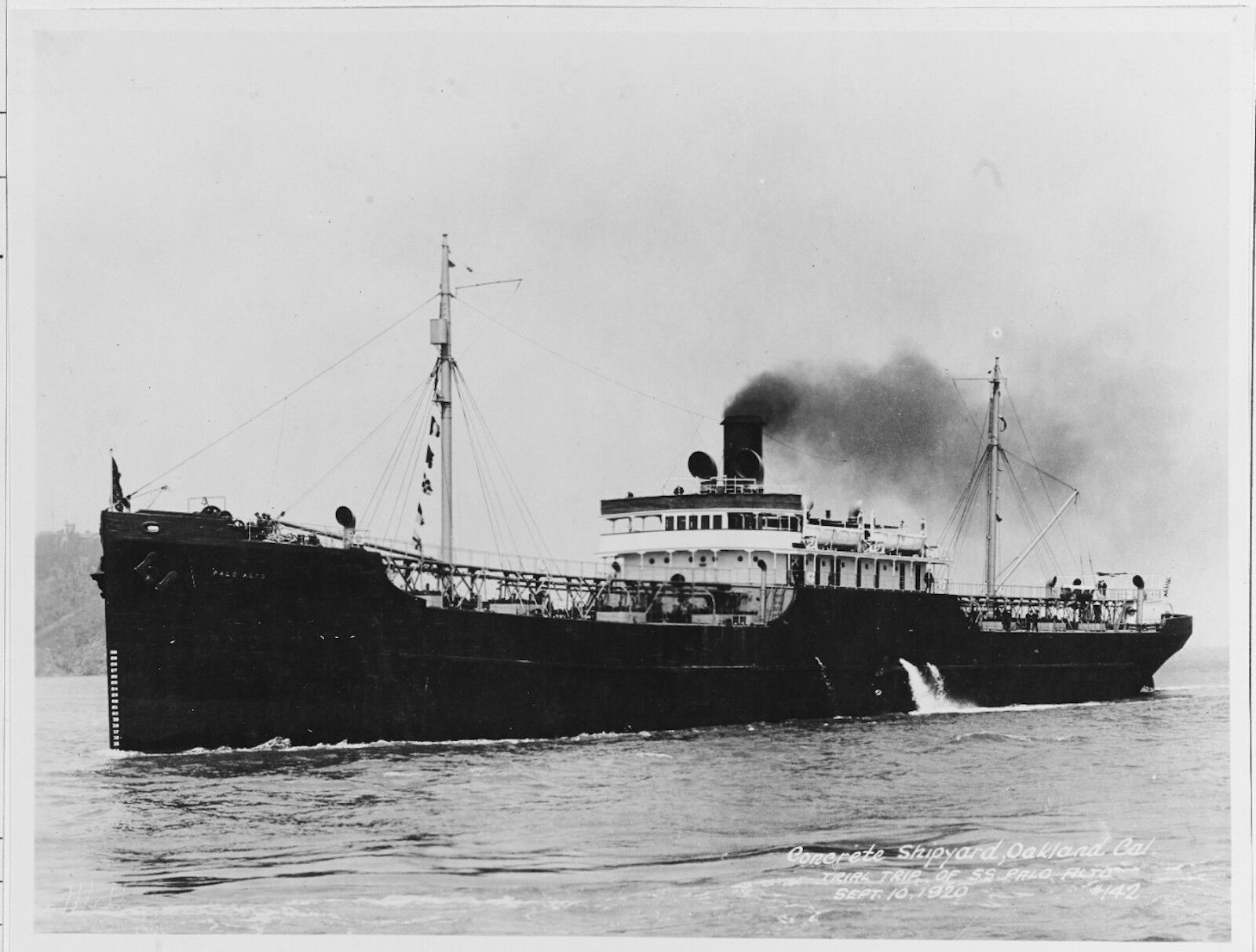 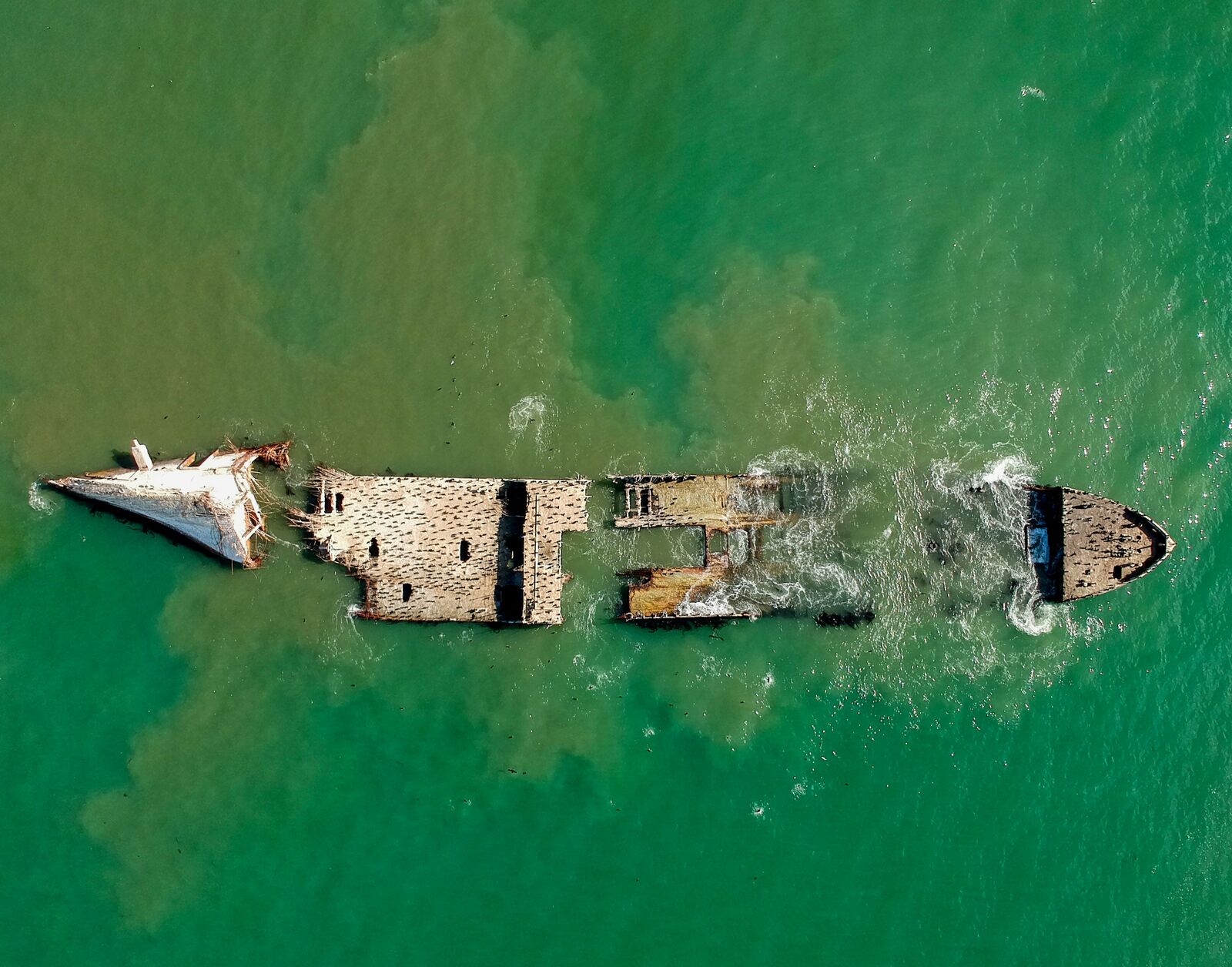 The next time you’re in Santa Cruz relaxing on the beach, you may want to take a closer look at the long pier at the end of Seacliff State Beach. Because the end of the pier isn’t just a prime fishing spot — it’s the site of a 420-foot-long ship built as an oil tanker for WWI. The war actually ended before it was finished, however, and it was quickly sold to a nightlife company, who turned it more or less into the 1920s version of a party ship, complete with bars and a swimming pool. But that company went belly-up during the Great Depression, and the SS Palo Alto just stayed there. Locals used to fish from it until the 1950s when it was closed for safety issues.

Today, the Palo Alto is slowly falling apart due to waves and heavy storms, though it’s still quite visible (but in several pieces). Obviously, you’ll be able to see the ship best at low tide. It’s usually covered in sea birds and it’s not unusual to see sea lions and seals swimming around the ship. The visitors center at Seacliff State Beach has an exhibit on the history of the ship and surrounding marine ecosystem, since the whole area is part of the Monterey Bay National Marine Sanctuary. 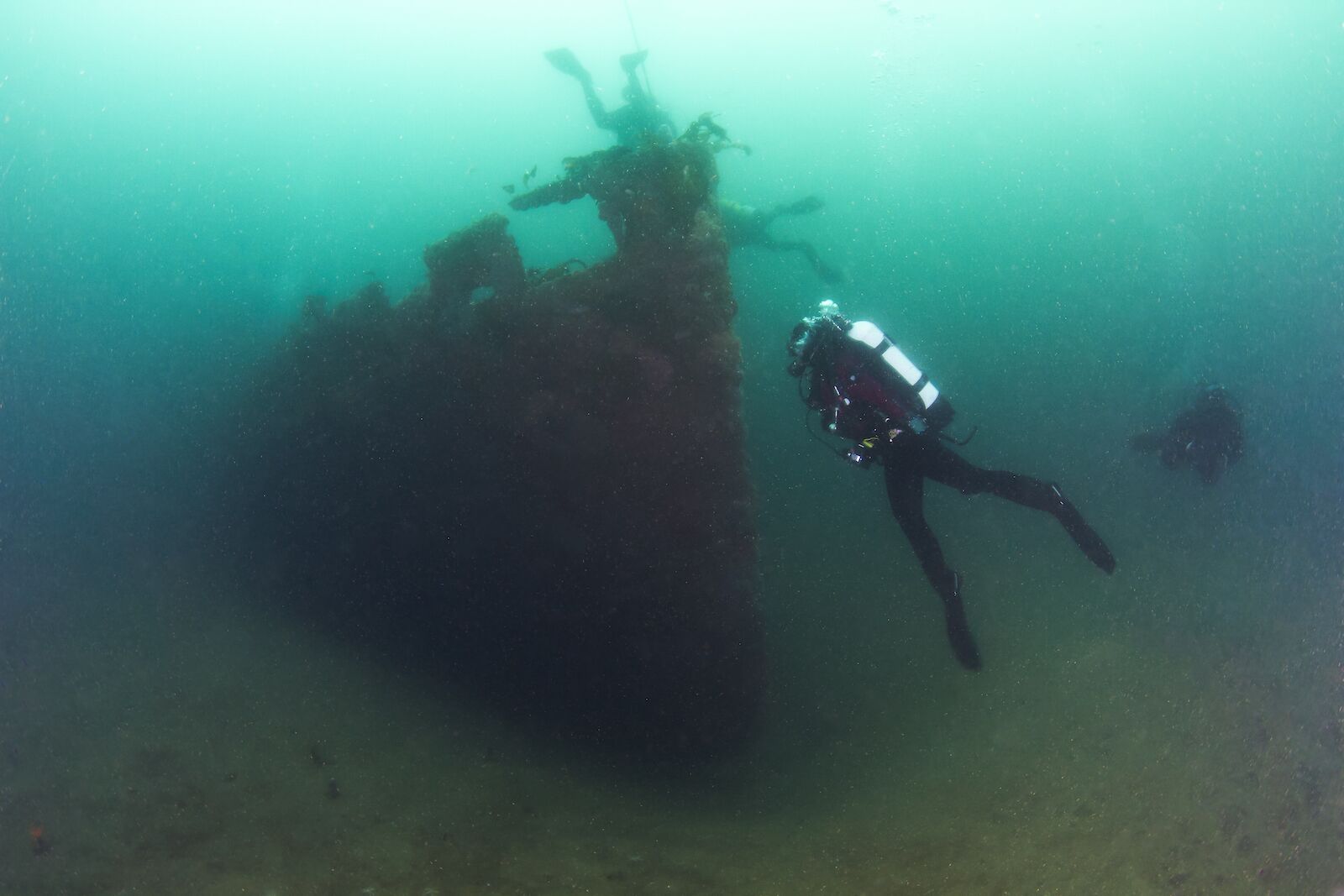 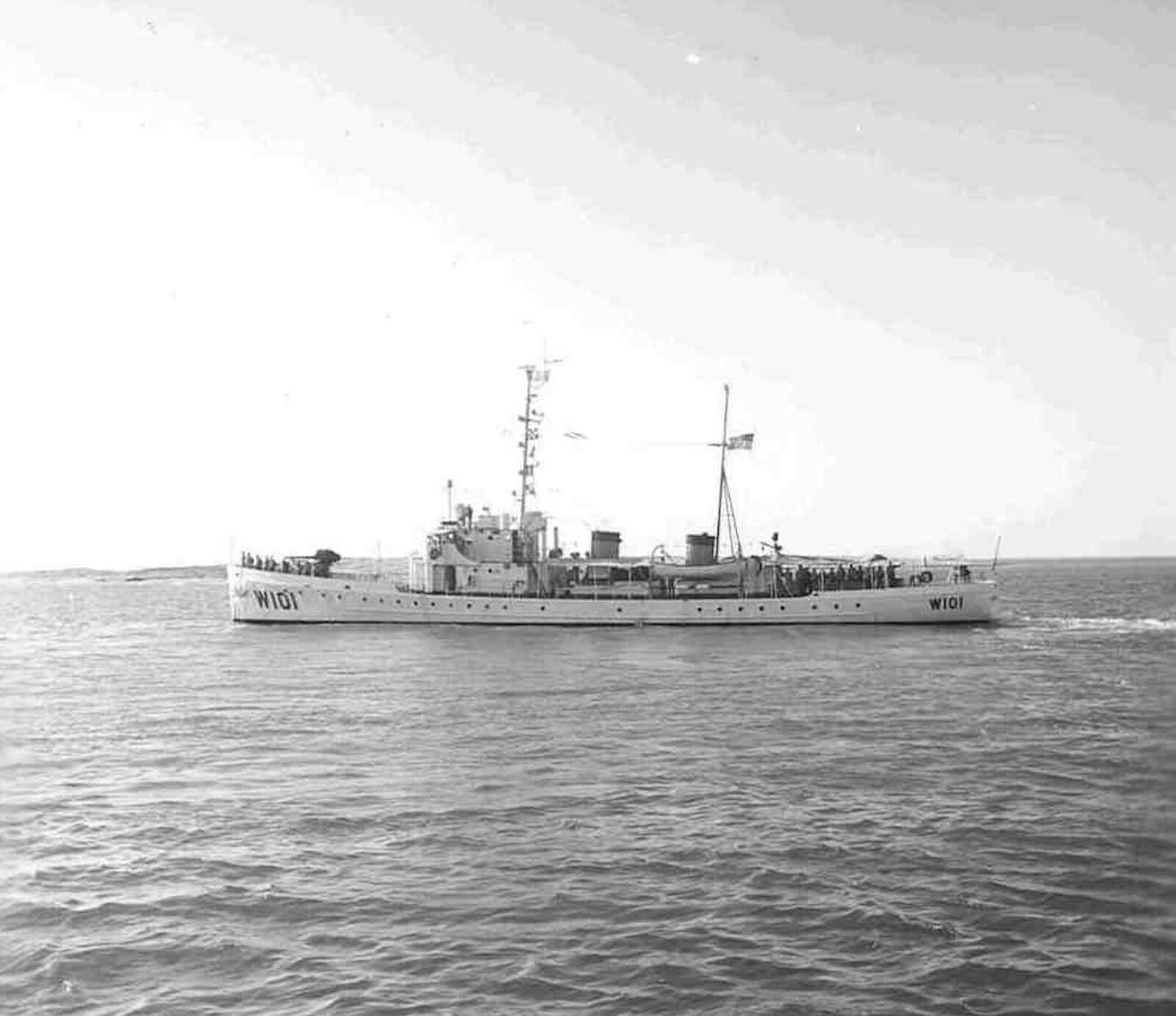 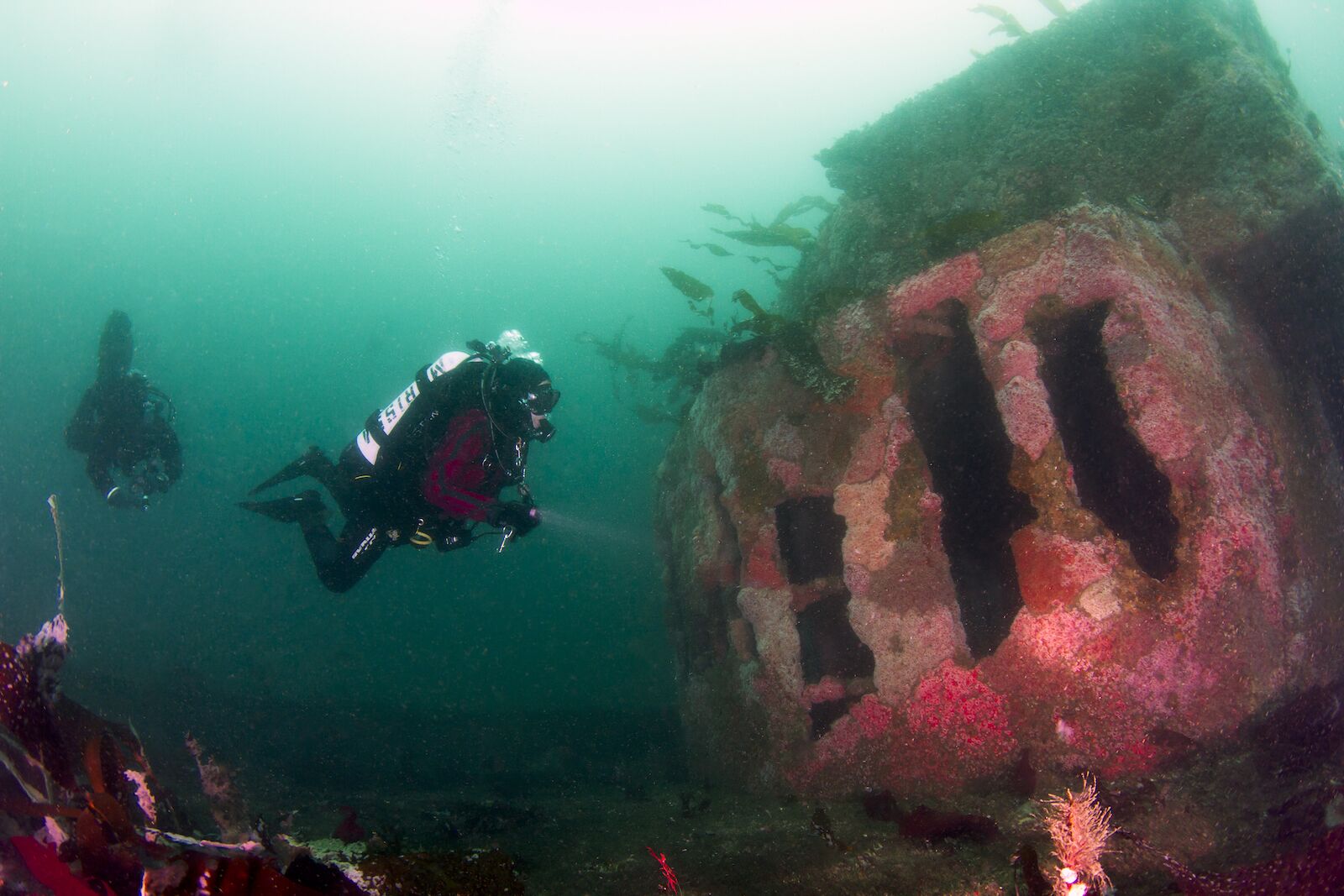 Most people who want to see wrecks in San Diego head to the well-known HMCS Yukon — a fantastic dive — but the less-visited Ruby E is no less impressive. The Ruby E started its life as the USCGC Cyane in 1934. It was built to be long and fast and could travel up to 16 knots to pursue rum runners and other ships trying to smuggle in alcohol during Prohibition. Though Prohibition ended at the end of 1933, the ship continued to chase smugglers trying to avoid taxes until 1937, when it was sent to Alaska for a few years before serving in Japan in WWII. It was decommissioned in 1950 and sold to a privately owned fishing company, then to a company or two in South America, before coming back to San Diego and being renamed The Ruby-E. The owners soon donated it to San Diego’s Wreck Alley and, after it was cleaned, it was sunk in July of 1989.

Ironically, given its history of chasing smugglers, the Ruby-E had secret compartments, presumably used for smuggling drugs in the 1970s and 80s. When they filled with water, it tilted the ship, causing it to sink exceptionally quick and land at a slight angle in its current location.

Today, the Ruby-E sits in water between 65 and 85 feet deep. Because of occasional currents, cold water, and poor visibility, it’s a slightly challenging dive, though advanced certifications aren’t required to stay near the upper parts of the bow. Advanced divers can swim through multiple rooms within the ship. 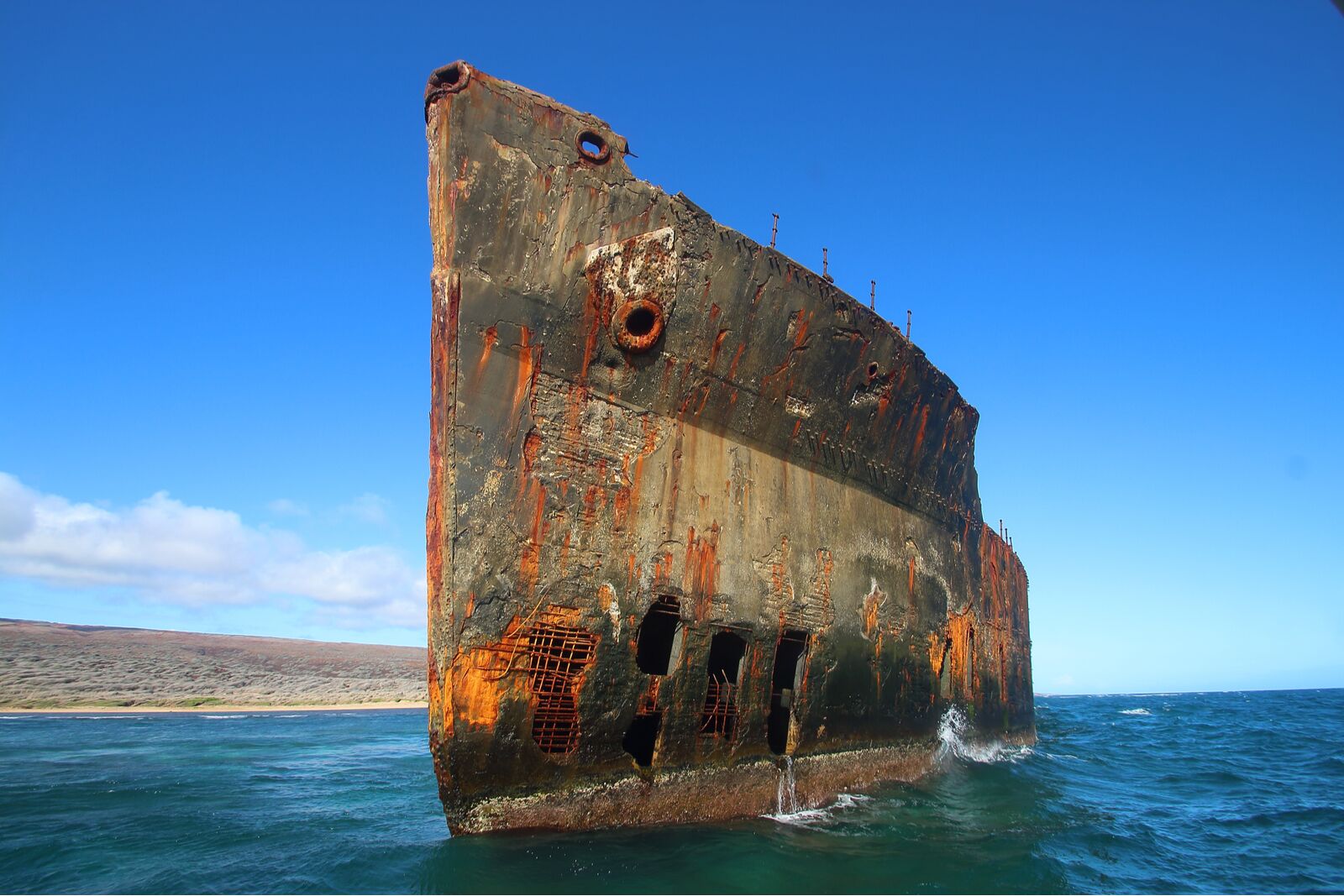 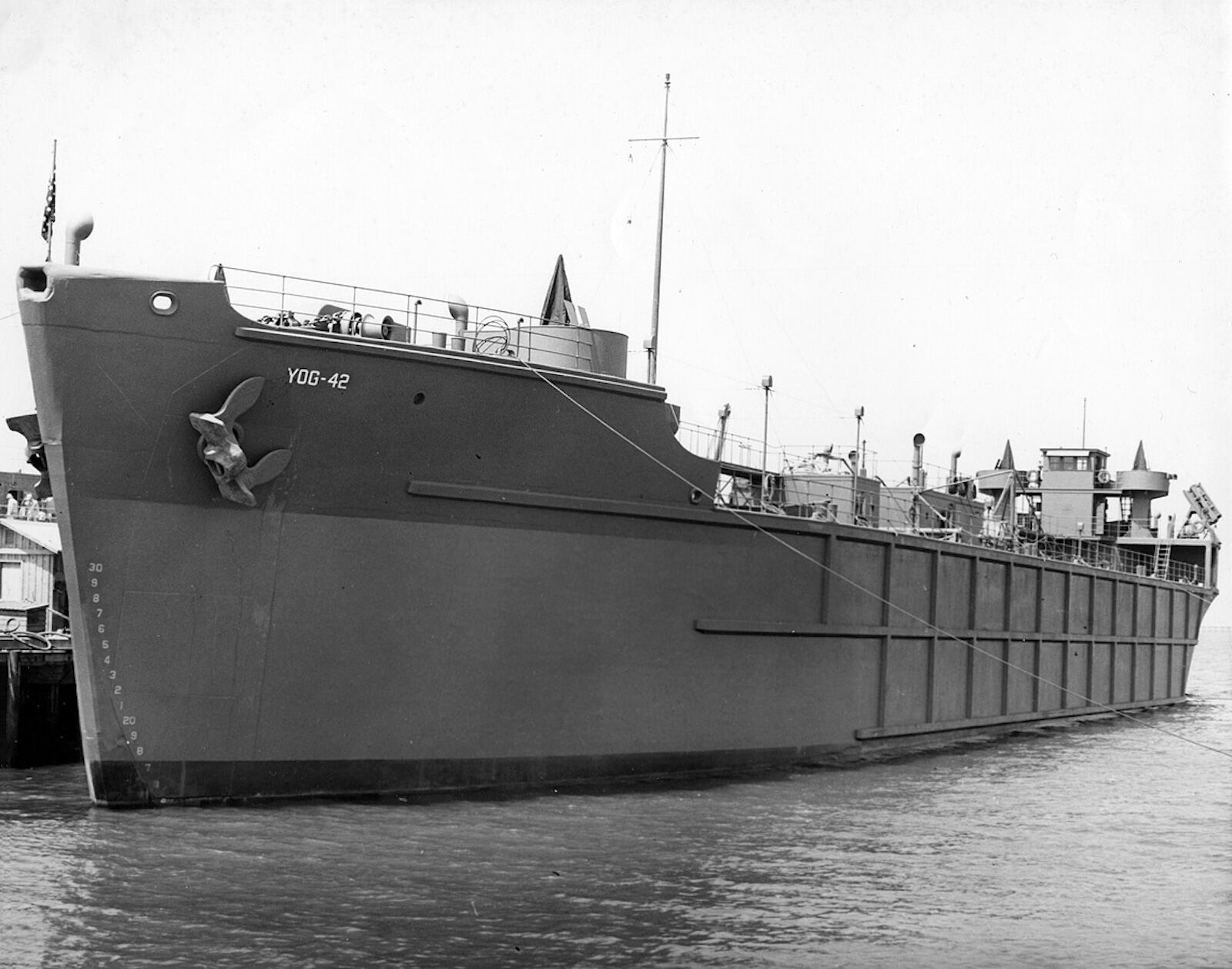 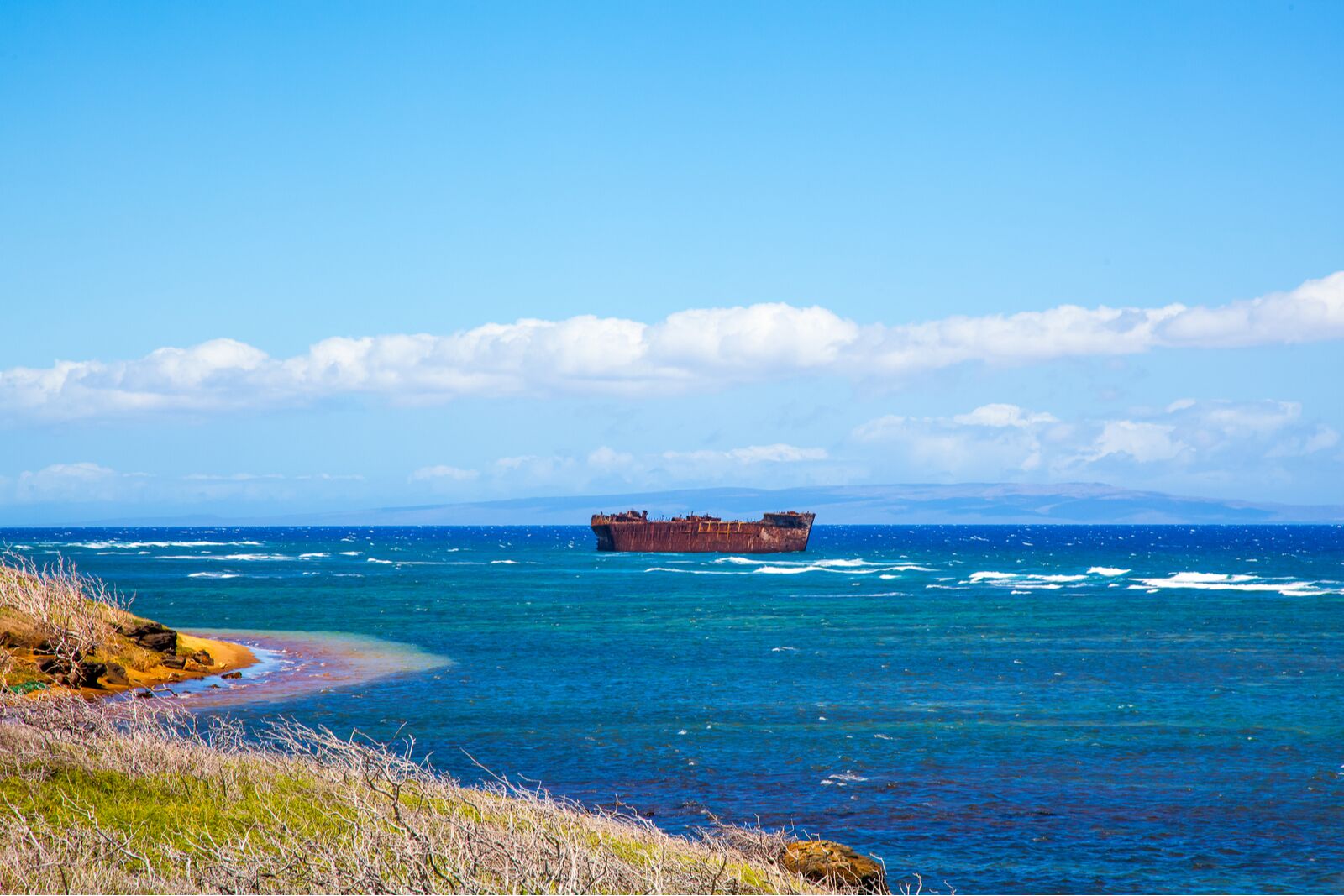 Launched in 1943, the 375-foot-long YOGN-42 served its first years supporting the Allied efforts in WWII, primarily around Japan and Oceania. It served more or less without incident, save for when the ship towing it was struck by a Japanese torpedo– but the YOGN-42 wasn’t damaged. However, it was decommissioned in 1949 for reasons unknown and sunk about a year later in its current location. It looks like a bit like a ghost ship, mostly because it sits several stories above the waterline, giving the impression that it’s still afloat.

If you’re on Lana’i, you can see it if you’re willing to rent an ATV and follow some rough roads out to the approximate location. But the easiest way to see it is to sign up for a snorkel tour that’ll take you out to the impressive shipwreck by boat. Just look for a snorkel tour that goes to Shipwreck Beach, an eight-mile stretch of sand whose offshore reefs have caused the downfall of more than a few ships. The other notable ship along the stretch of beach is the  YO-21, an oil tanker that was a Pearl Harbor on December 7, 1941 — though it’s a good six miles on foot from the YOGN-42. 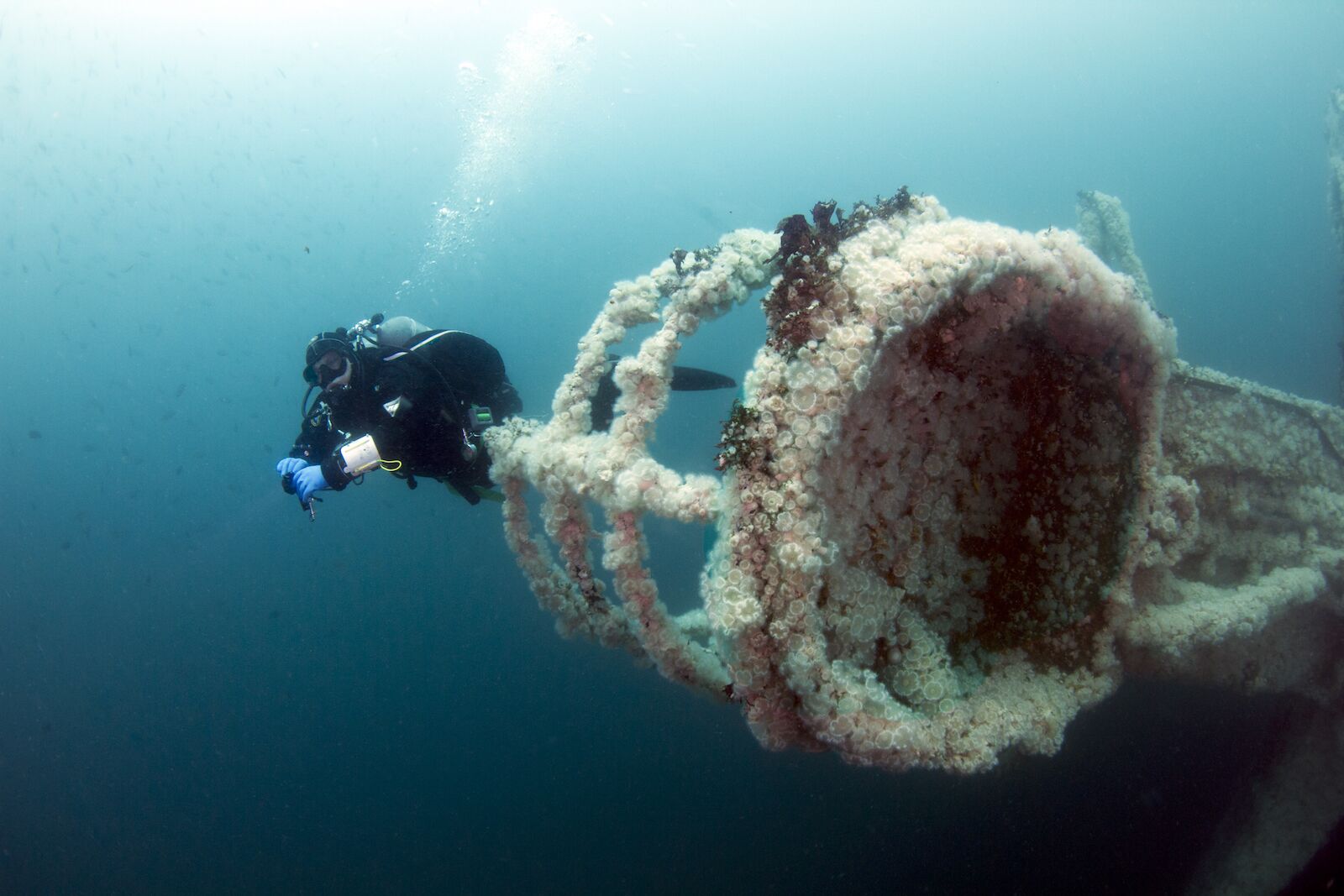 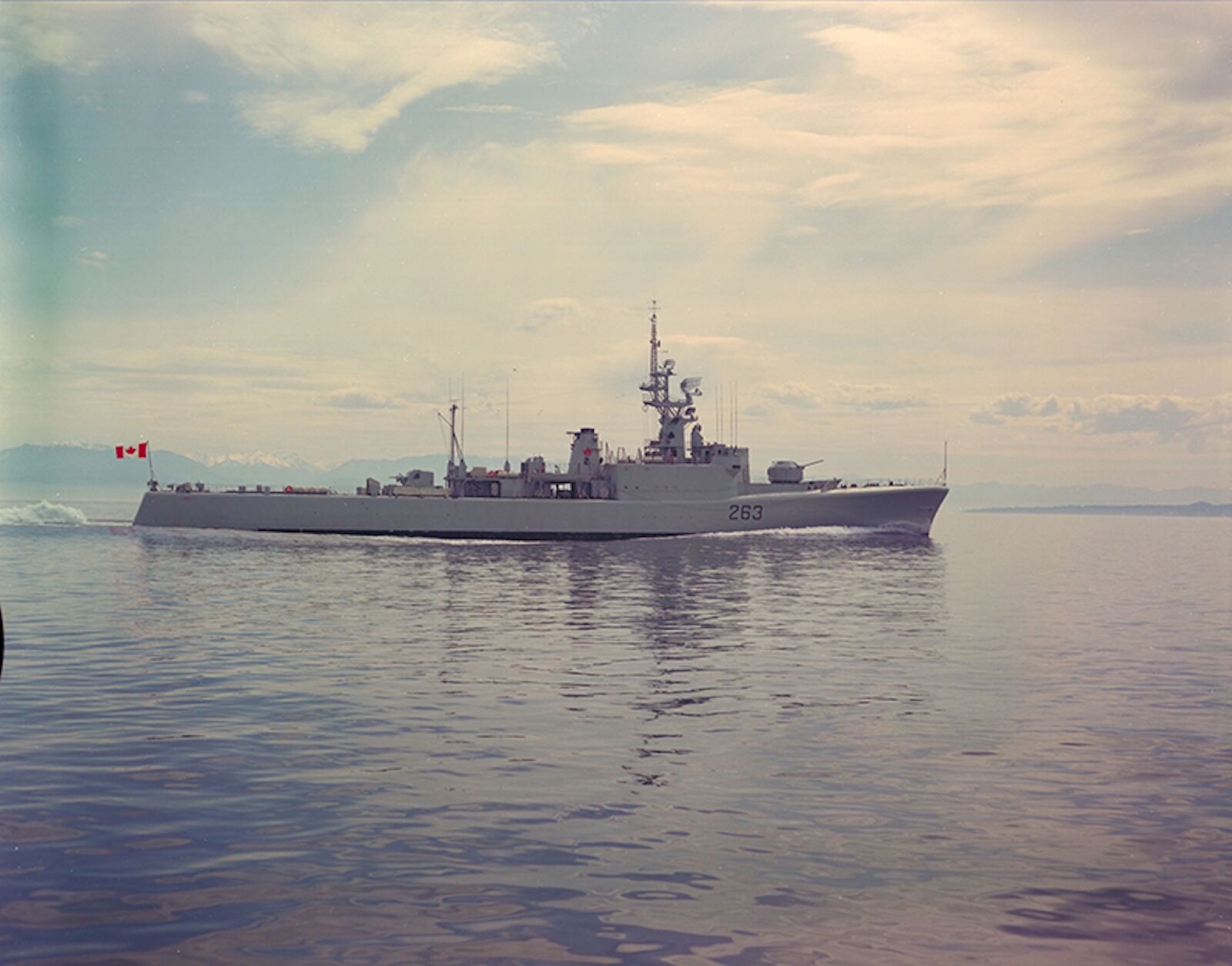 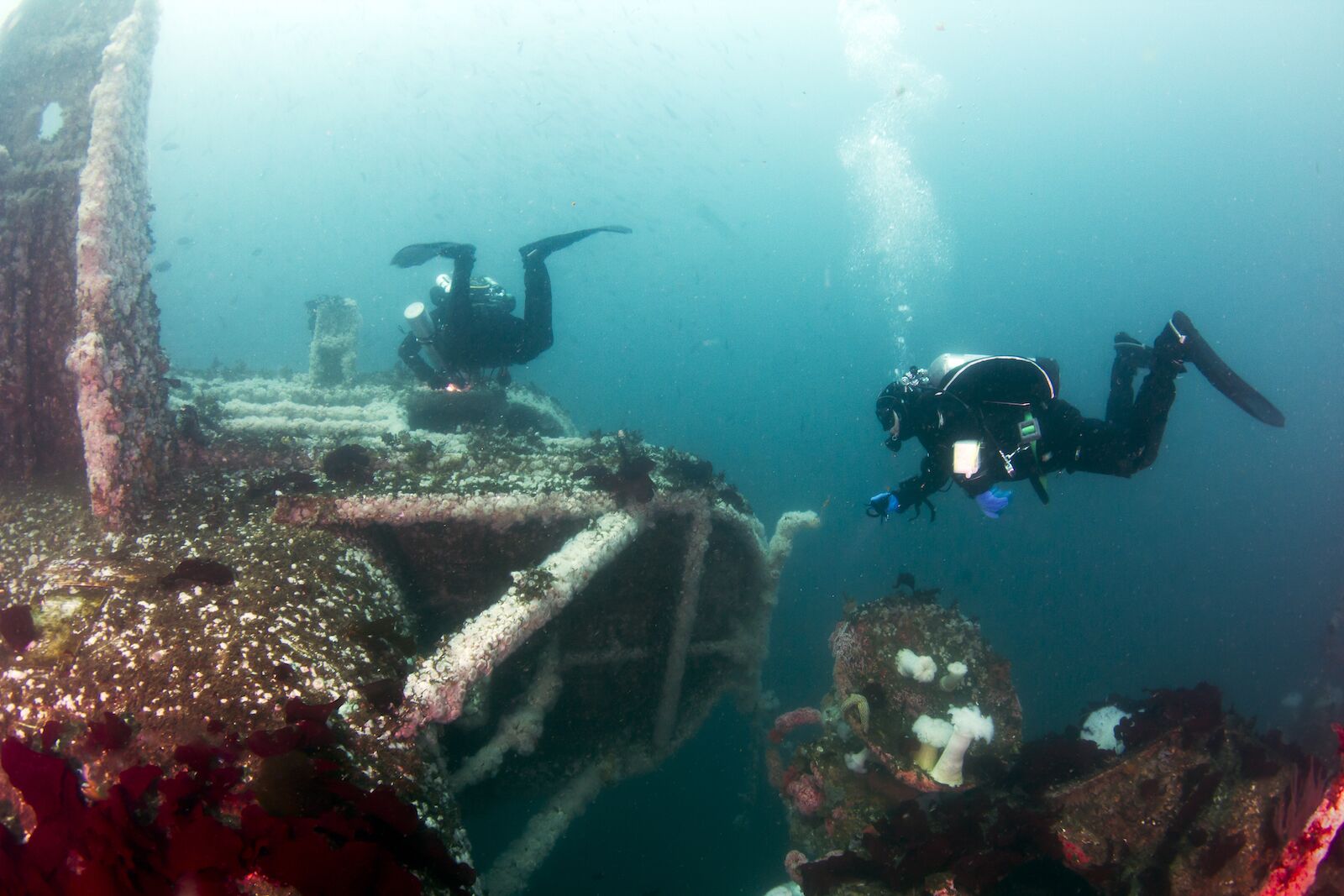 The HMS Yukon is probably the most well-known shipwreck in San Diego’s Wreck Alley. As you may be able to guess from the name, it was a Canadian ship named after the Yukon River. It was built to be a destroyer — a ship that goes on the offense to protect larger gunships during marine warfare. But it didn’t see much combat and only served until 1993. In 2000, a San Diego-based ocean protection organization bought it and cleaned it to sink as an artificial reef. However, the Yukon technically wasn’t intentionally sunk, as it flooded and sank on accident during a storm one day before its scheduled sinking. Unfortunately, that threw the ship’s location off a bit, and the shallowest part of the 366-foot-long naval ship is still at a depth of 60 feet. The bulk of the ship sits between 80 and 100 feet deep.

Combine those depths with San Diego’s cold water, iffy visibility, and not-infrequent ocean surges and currents, and it’s no surprise that visiting the Yukon is for advanced divers only. And entering the ship — which has several levels and dozens of rooms, most of which are pitch black — should be attempted only by very experienced divers familiar with ceilings and directional navigation. 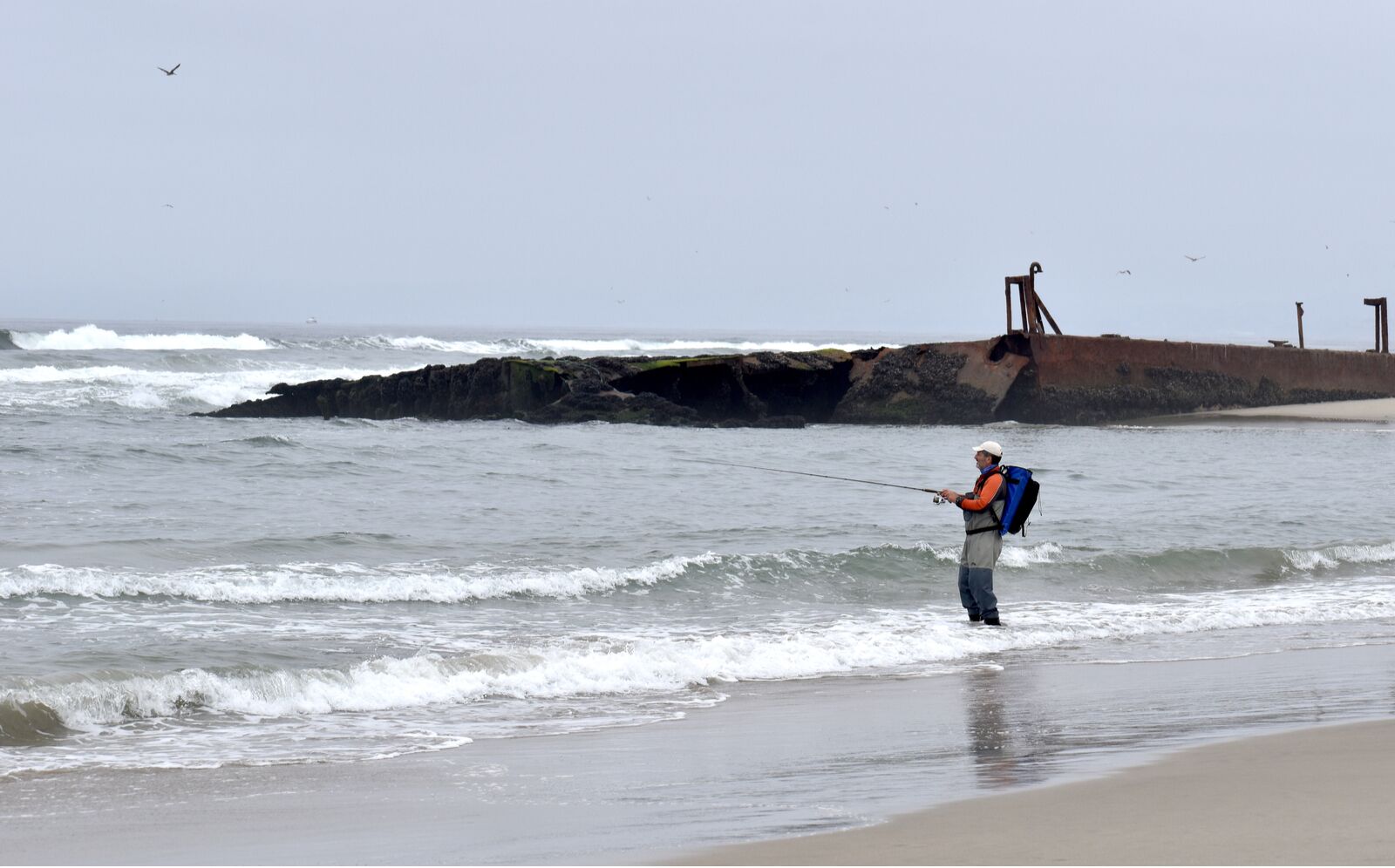 Just south of San Francisco sits a massive barge just off the Salinas River Wildlife Refuge coast, but that’s about the extent of all anyone knows about it. It’s a barge, and it’s there. The hike to see it is about 1.5 miles north of the sanctuary. Most people say it’s been there since the early 1980s, though others say it washed up in large storms in 1995. Other than the fact that it says “Sauce Bros” on the side, it’s anyone’s guess what the ship’s history is.

You can walk to the barge at low tide, though it’s visible to some extent usually all the time, except for when the tide levels are especially high.

Art + Architecture45 Eerie, Creepy, and Often Beautiful Abandoned Places Around the World
Tagged
Beaches and Islands Diving Outdoor
What did you think of this story?
Meh
Good
Awesome