Your uncle’s political rants won’t be avoidable this Thanksgiving. But thanks to modern technology, the other most unpleasant part of Thanksgiving — crowds — can be. The omniscient force known as Google Maps, in collaboration with the Google News Initiative and Polygraph, figured out when malls, movie theaters, roads, and other Thanksgiving hotspots will be the least and most crowded. It also broke it down by city in the country’s 25 largest metros in a fun, interactive chart. Here are the biggest takeaways, and the best time to do everything around Thanksgiving, from leaving your house to buying more booze. 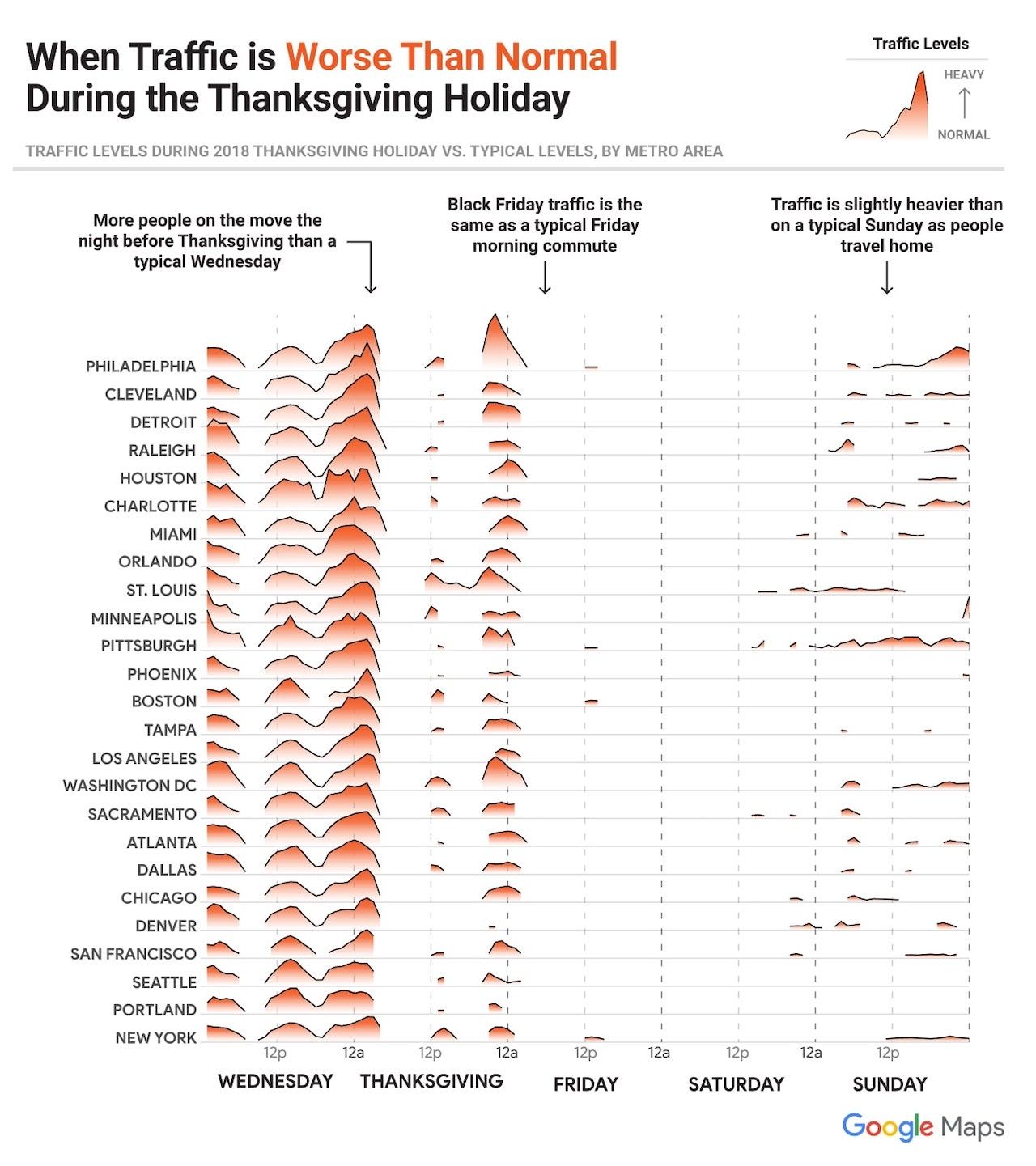 If you’re looking to avoid Thanksgiving traffic, you may want to start developing a taste for Mini Thins. Not surprisingly, the clearest times on the roads are early in the morning, generally between 2:00 AM and 3:00 AM on Wednesday or Thursday. If you think you can safely drive during a time your body wants to be in bed, the highway’s all yours.

Interestingly, which day is less congested depends on the region. Wednesday is easier almost everywhere except the I-85 corridor between Atlanta and Charlotte; the upper Midwest in Chicago, Pittsburgh, and Cleveland; and Dallas and Houston in Texas. Early Thanksgiving morning makes for the easiest driving in those places, as well as in Seattle. 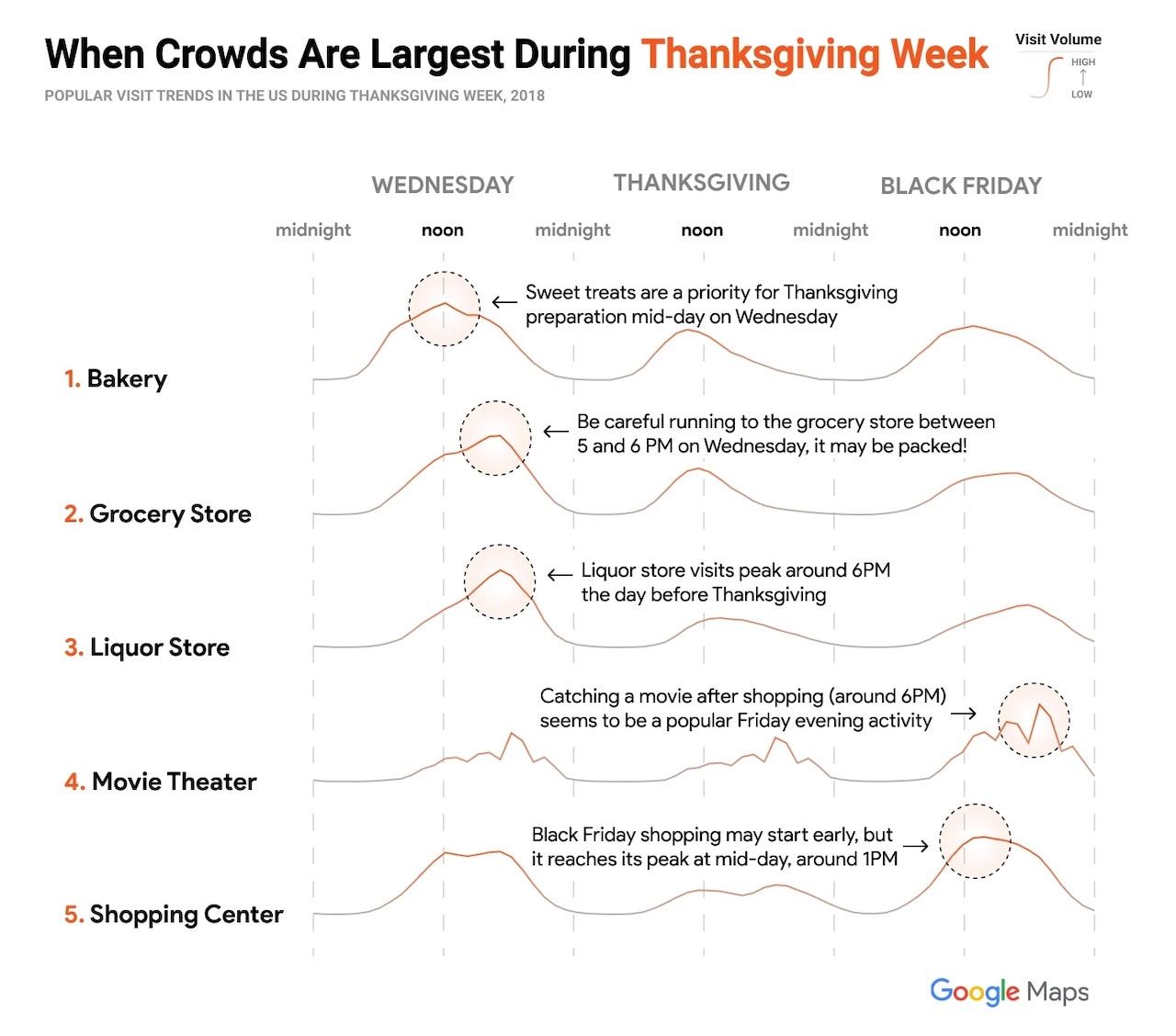 Picking up bread and dessert

The best time to grab all the rolls, cookies, and pumpkin pies from your local bakery? That’ll be at 2:00 PM on Tuesday. That’ll also yield some slightly stale bread by Thursday night, but hey, we all make sacrifices to avoid standing in line. The worst time to grab your baked goods will be 2:00 PM on Wednesday, presumably when everyone realizes they still haven’t bought dessert.

Going to the movies

Perhaps thanks to the NFL and Black Friday, but going to the movies isn’t quite a time-honored Thanksgiving tradition as it is at Christmas. The emptiest theaters you’ll find will be Tuesday at 11:00 AM when you’ll be sharing the theater with all the people desperate to escape their homes to the serenity and relative calm of a pre-noon, weekday showing of Terminator: Dark Fate. That same peace won’t be so easy to achieve later on Friday, however, as the 6:00 PM showings (likely after shopping) will be the most crowded of the weekend.

Stocking up at the liquor store

Tempting as it might be to do your best Leaving Las Vegas and camp out in front of the liquor store before it opens on Wednesday morning, you’re actually better off — both in terms of crowds and societal acceptability — going the night before. Tuesday at 10:00 PM will see the fewest people buying fuel for animated dinner table discussions. Wednesday at 5:00 PM brings the longest lines at the liquor store, which can either be interpreted as kicking off the celebration of a long weekend or preparing to cope with the onslaught of family.

Really, the best time to buy all your non-perishables for Thanksgiving is a month before. But if you have to grab some gluten-free stuffing because your niece just announced she’s allergic to gluten this year, late-night Tuesday is the time to go as crowds are lightest at 9:00 PM. If that same niece waits until 5:00 PM on a Wednesday to tell you she now needs a tofu turkey because she also went vegan, tell her she’s SOL; crowds at the grocery store hit their peak at that time, and salad is a perfectly fine dinner.

If you’re down to knock out your holiday shopping at Walgreens, you may have just hacked Christmas. Thursday at 7:00 AM will see the smallest crowds of the year at shopping centers, which is a bit of a misleading statistic since only Walgreens, CVS, and Scrooge’s House of Misery are actually open Thanksgiving morning. Even the black hearts at Best Buy and Walmart give their employees a chance to grab an early plate before opening after 5:00 PM.

The worst time actually isn’t on Black Friday, but rather Wednesday at 5:00 PM, which is shaping up to be the best hour of the year to not leave your house.

Laugh all you want at the masses pitching tents outside Target, but early morning actually sees the fewest crowds both on the roads and at the mall on Black Friday. Laze around the house and you may as well do your shopping online: By 1:00 PM on Friday, shopping centers and the roads around them will be in full-on chaos. At that point, it’s either dealing with the devil you know versus the devil you don’t.

If your family hasn’t driven you to drink half a bottle of vodka for dinner, you’ll be able to leave right after your food coma. Friday between 2:00 AM and 3:00 AM will have the clearest roads all weekend, save for people trying to get that first spot in line at Target. Boston is the only outlier here, where Sunday at 2:00 AM will be fastest.

Bostonians apparently like to get away from their families as quickly as possible too, as Friday at 3:00 PM will have the busiest roads leaving Beantown. That’s also the case in most other cities with the exceptions of DC, Pittsburgh, New York, Atlanta, Charlotte, and San Francisco, who all like to stick around until Sunday, when 2:00 PM to 4:00 PM makes for the worst driving — especially if this year finds you carpooling with your uncle.

Family TravelThanksgiving Traditions You Can Start This Year, No Matter Where You Are
Tagged
Holidays United States
What did you think of this story?
Meh
Good
Awesome