Gelato is one of Italy’s most famous desserts. Silkier and thicker in texture than ice cream, there’s nothing more satisfying on a hot Italian day than slurping on an indulgent scoop of the stuff. Plus, gelato has less cream and sugar than ice cream, so it at least sounds healthier.

However, not all Italian gelato is created equal. For a taste of the finest artisan gelato in the land, gelato lovers must delve into the heart of the northern Italian region of Emilia Romagna. Here, you’ll find the lively medieval city of Bologna, also known, tantalizingly, as “the fat one.” And for good reason. Bologna is home to more than 100 gelaterias, a gelato museum, and a gelato university. The local Bolognesi will tell you that you can’t go wrong with classic flavors like pistacchio, nocciola, and stracciatella to name a few. Better still, most gelaterie produce their own unique flavor creations, well worth the indulgence of an extra scoop.

Choosing which gelaterias to visit, let alone which flavors to try, can trigger the FOMO in even the most determined of gelato aficionados. The number one thing to avoid is the gelaterias with neon-colored gelato piled high in the window, typically found next to major tourist attractions. Real gelato has far more natural-looking coloring. Thankfully in Bologna, there are far more places offering the real deal than not. We’ve taken the stress out of the gelato headache with our guide to the finest gelaterias in Bologna. 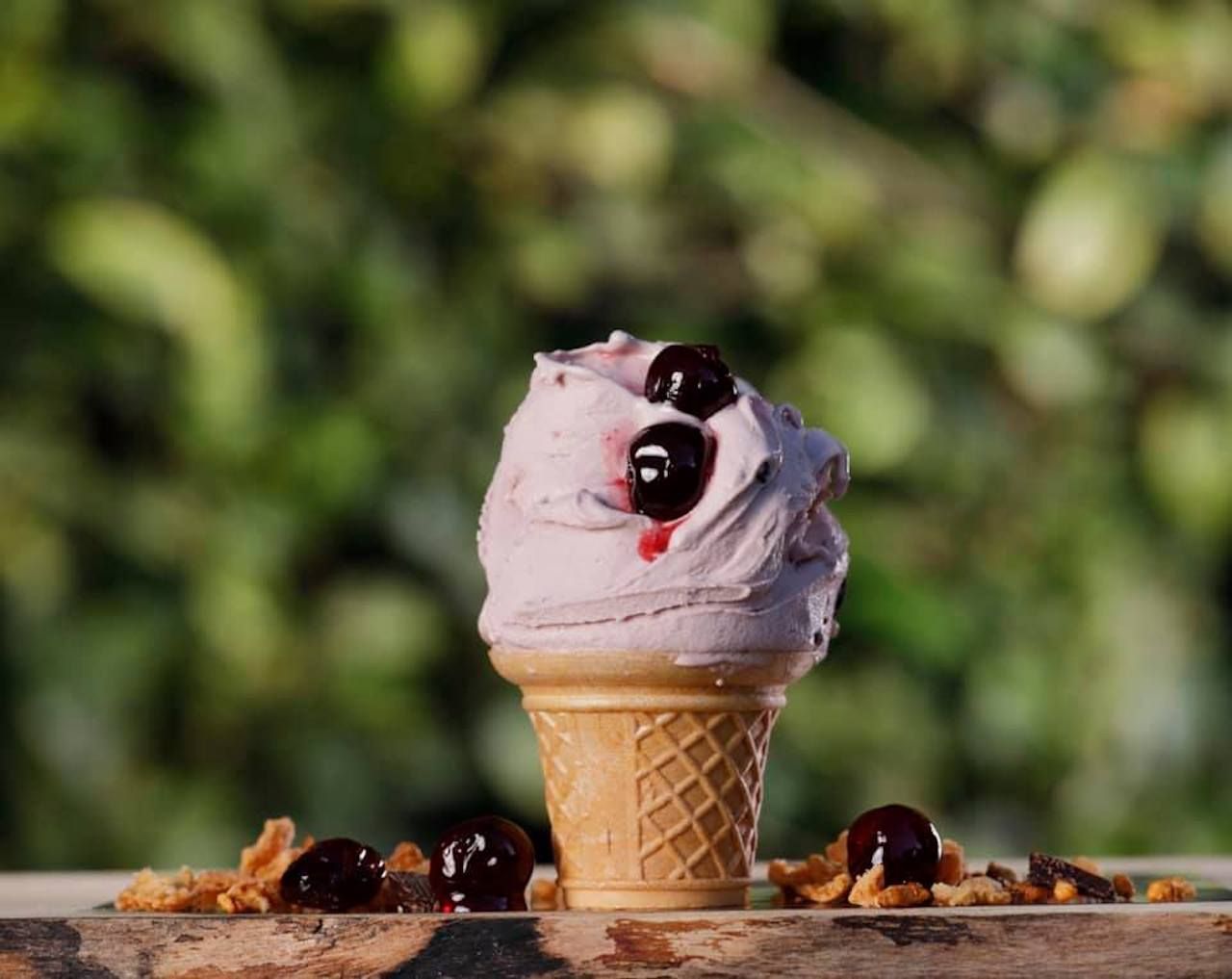 Opening the door to Cremeria Funivia is a heavenly experience. You’re met with the soothing, chic white interior and the smell of happiness. The downside is that this gelateria is often incredibly busy and has a long lines of gelato lovers waiting. Not to worry. The line moves surprisingly fast, and the staff is happy to offer tastings if you find yourself at the counter without a decision.

Unique to Cremeria Funivia is the dreamy lemon peel, ricotta, and biscuit flavor called Cavour. Another favorite is San Luca, a gelato of white chocolate and crispy puffed rice. But the best selection on the menu is the genius Focaccia con Gelato, an indulgent brioche sandwich with three scoops of your choice. Cremeria Funivia is located on the fringe of Piazza Cavour, a tranquil, olive-tree-adorned garden square. Grab a shady spot by the pond, which is perfect for savoring your gelato on a hot day. 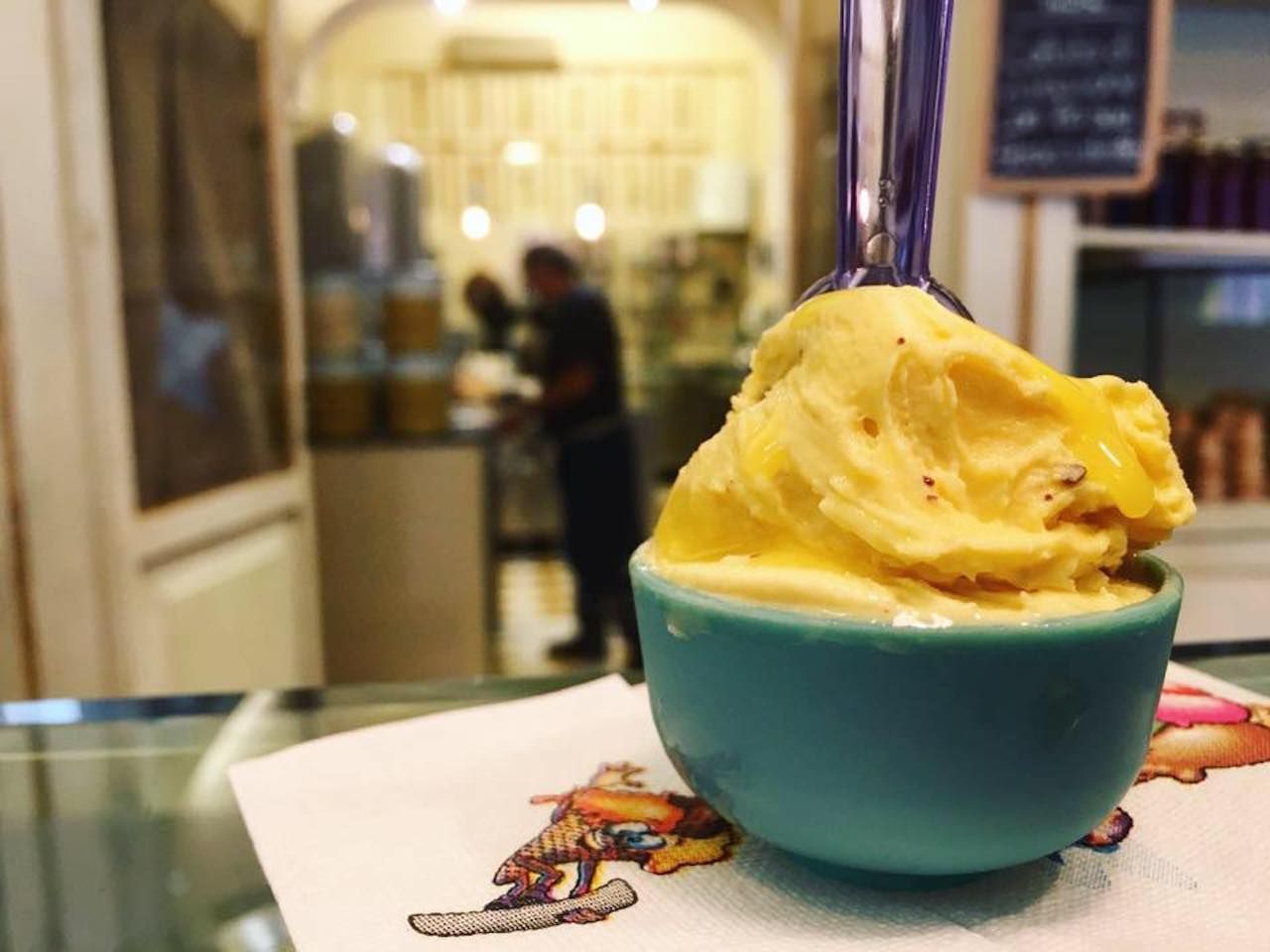 The small and unassuming old-world shopfront of Cremeria Santo Stefano is tucked away under one of Bologna’s many iconic porticos. You’d probably walk past it were it not for the queue winding around the corner. The interior is a delightful throwback to the parlors of yesteryear with checkerboard tiles, old-world fonts, and a rustic interior.

Santo Stefano is considered by some to be one of the best gelaterias not just in Bologna but in the world. The shop makes exceptional traditional flavors but also gets experimental, producing combinations like buffalo camembert with peppers for those with adventurous palates. The must-try gelato here is speculoos, which is chock full of the spiced shortbread cookie taste that will be familiar to cookie butter fans.

Gelateria Gianni for great gelato, no matter where you are 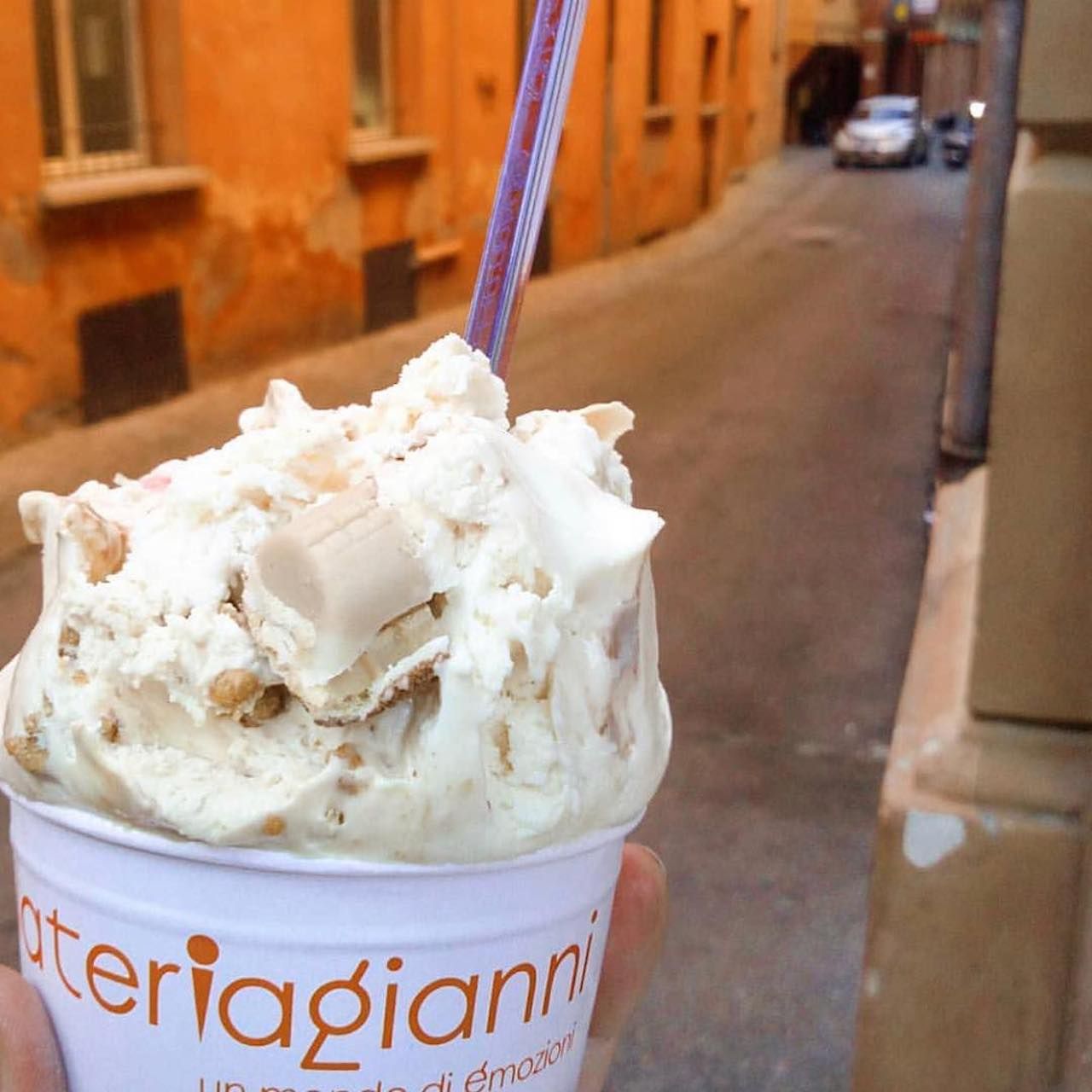 Wander the streets of Bologna and you’ll find numerous Gelateria Gianni shops, meaning you’ll never be far from great gelato. The shops are accommodating to English speakers and provide a translated menu board. This proves helpful for Italian speakers too, as the scintillating gelato names often give little indication of their contents.

The gelato that’ll haunt your dreams is the thrillingly named Samauri, a dangerously rich and creamy concoction of mascarpone, cacao, and silky ricotta. The shop on Via Monte Grappa is conveniently close to the magnificent central square, Piazza Maggiore. It’s a great location to retreat to, Samauri in hand, to perch on the steps and watch the birds and Bolognesi go about their daily lives. 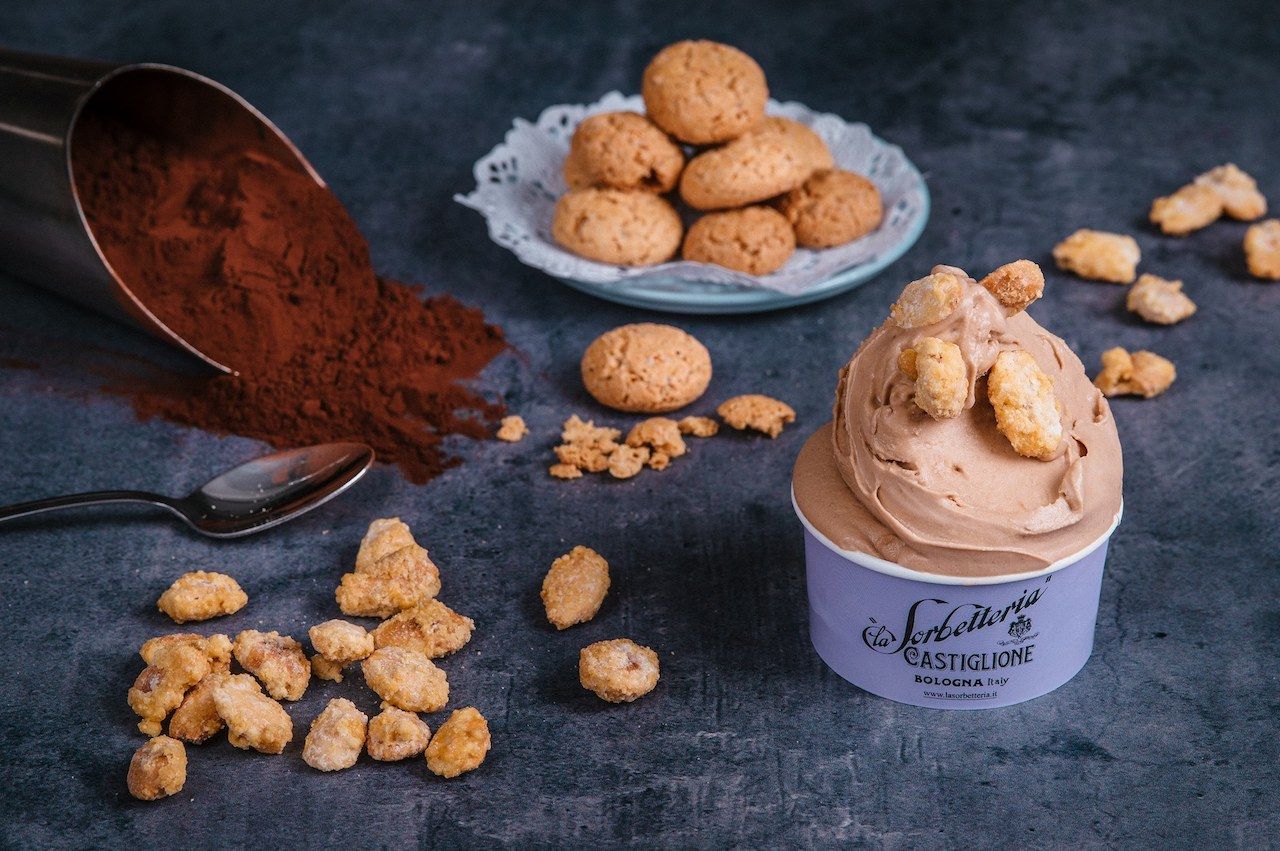 Popular with locals, La Sorbetteria Castiglione has gorgeous old-world parlor vibes and more than a touch of a Willy Wonka atmosphere. Gelato lovers are invited to peep through the glass to watch the magic of gelato creation unfold in the kitchen. This delightful distraction has left many a gelato aficionado unprepared for making their flavor selection upon reaching the front of the queue.

The Dolce Emma flavor is incredibly indulgent. It oozes generously with sweet caramelized figs and is laced with ricotta. Chocolate lovers should try Gianduia, a decadent hazelnut and chocolate concoction that’s reminiscent of Nutella.

Galliera 49 for gelato with an environmental conscience 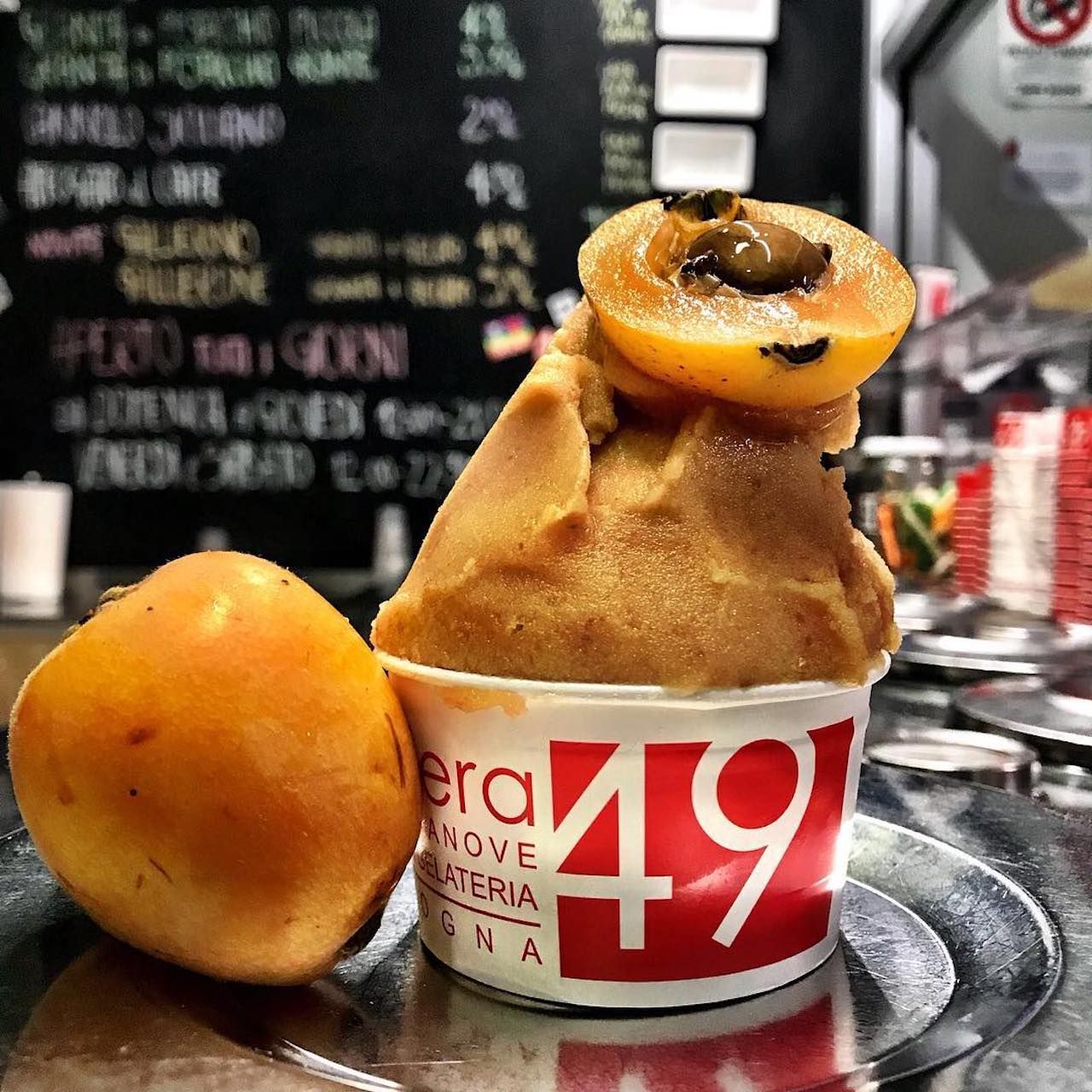 This tiny, street-facing canteen produces gelato from fair trade ingredients and uses sustainably produced, compostable coppettas (cups). There’s no waiting in line at Galliera 49. When it’s busy, you take a number. This is advantageous as it leaves you free to dart restlessly from cabinet to cabinet, trying desperately to choose flavors before placing your order when your number shows on the display.

The perfectly balanced salted caramel (caramello salato) is the flavor to try here. But, if you’re having trouble deciding, you might take advantage of a gelato brioche: another sandwich indulgence allowing you to taste three flavors. Enjoy your gelato ecstasy while wandering around the castle ruins in nearby Parco della Montagnola. 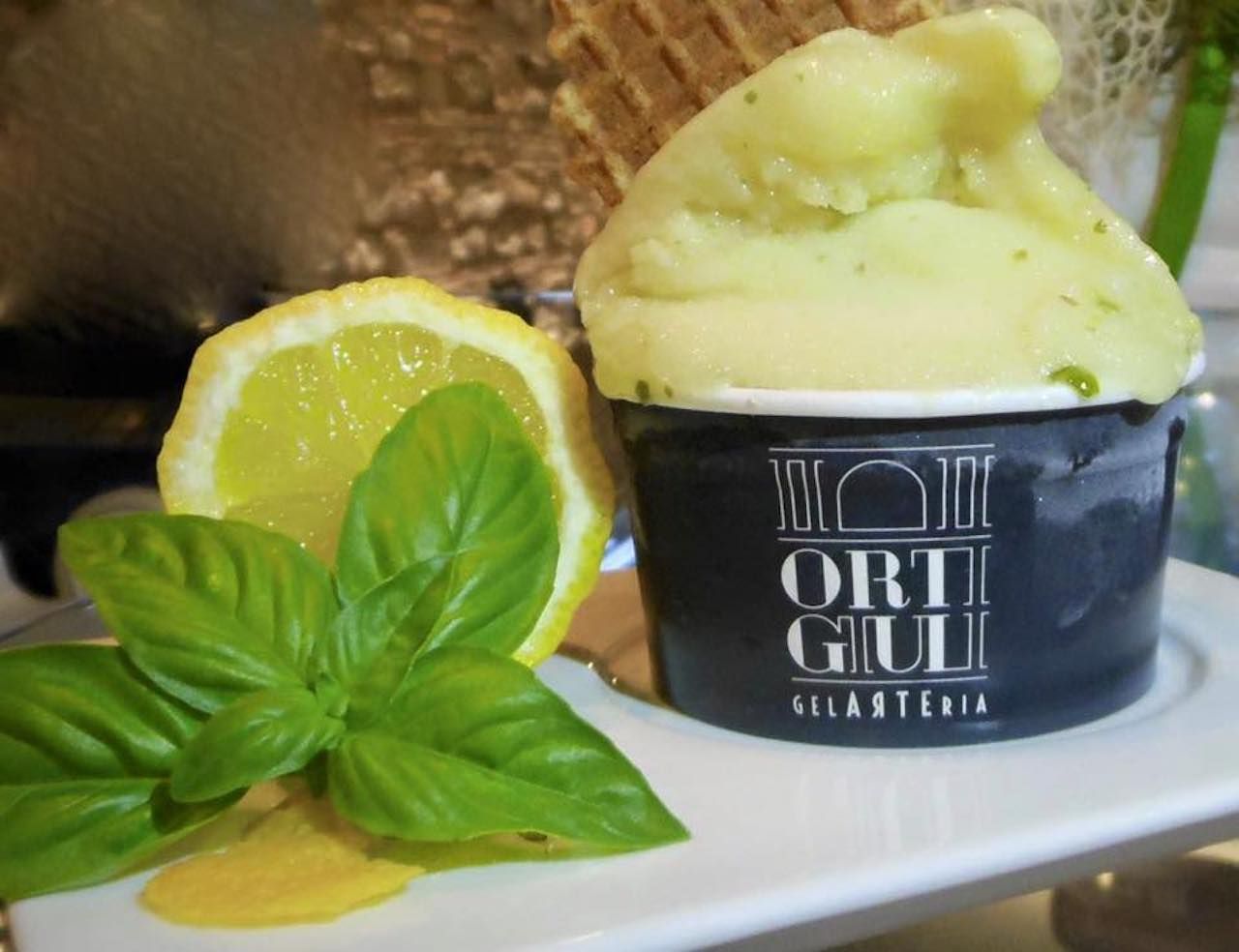 Dairy-intolerant, gluten-free, and vegan dessert lovers won’t want to miss out at Stefino. In fact, the sheer breadth of vegan choices creates a decision-making nightmare for those who are usually faced with none. The plant-based chocolate gelato, cioccolato, is a truly magnificent place to start. Rows of granita and sorbet further expand the dessert possibilities for those with dietary requirements.

Stefino’s approach to gelato is avant-garde — it’s not afraid of imaginative flavor combinations or using unexpected ingredients like wasabi. There’s also more traditional dairy-based flavors not to be missed like pistacchio and nocciola. With organic products and gelato that’s lower in sugar and fat, you could almost argue that Stefino’s gelato is healthy. Another coppetta, anyone?

DessertThe 9 desserts you need to try in Italy that aren’t gelato
Tagged
Dessert
What did you think of this story?
Meh
Good
Awesome

The difference between butter chicken and chicken tikka masala
The truth about artificial vanilla extract (and why you should always splurge for pure)
7 decadent global cheesecake styles you need to try
Denver’s Marijuana Mansion is the most glamorous cannabis experience you can have
What’s the difference between French and Italian bread?

The 7 most warming winter desserts from around the world