Some things in life just shouldn’t be DIY. Complex electrical work, for example, and dental surgery.

Some would say scuba diving falls into that category, too, what with the completely unnatural nature of submerging the human body under 50 feet of ocean for an hour at a time. But if you’re a certified diver with even a modicum of experience, there’s a place in the Caribbean where DIY diving is divine. A place where yellow stones off the highway each mark a new magical undersea world. When diving in Bonaire, all of this is easy to explore with nothing more than some gear, a C-card, and your diving buddy. 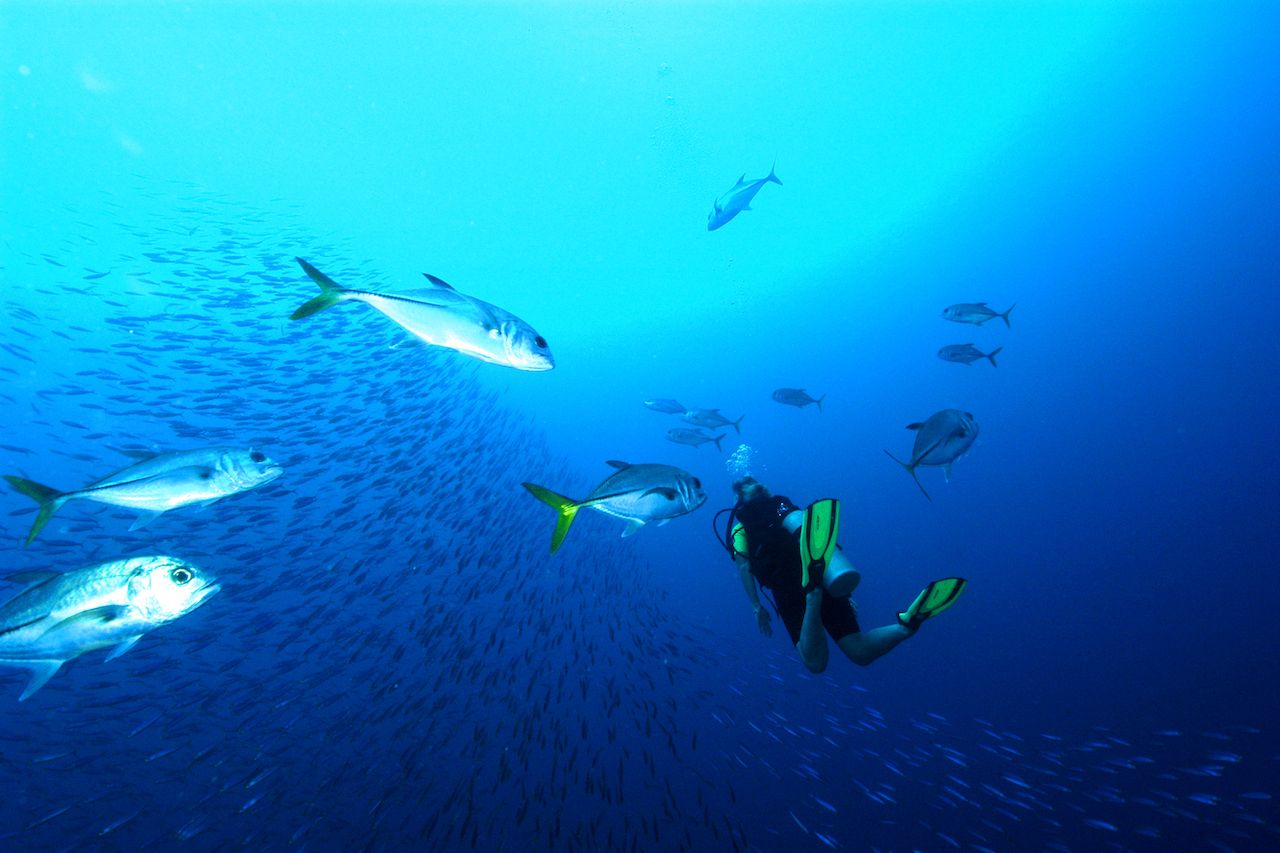 In many dive destinations, you fly to a far flung tropical island, book a dive trip with a local operator, and hope they show you the best sites. It typically involves a boat ride, a guide, or in some cases, a live-aboard vessel. And your experience is nearly always at the mercy of your dive company’s agenda and availability.

But in Bonaire, what you see and when you see it is entirely up to you. That’s because this Dutch Caribbean island smack between Aruba and Curaçao is designed as a shore divers heaven, with plainly marked dive sites, easy dives, and plenty of places to swap out your empty tanks for full ones.

Bonaire is ideally suited for avid divers for a few reasons. First, the reef is pretty easy to navigate, even for those who lose their way underwater easily.

“The reef is pretty much the same all around the island,” the manager at Dive Friends at the Delfins Beach Resort told me as I picked up gear for the week. “The bottom slopes down, then the reef slopes up, then it drops down again. And it’s never that deep, so if you can’t figure out where you are, just pop up to the top, look at the shore, and swim back.” 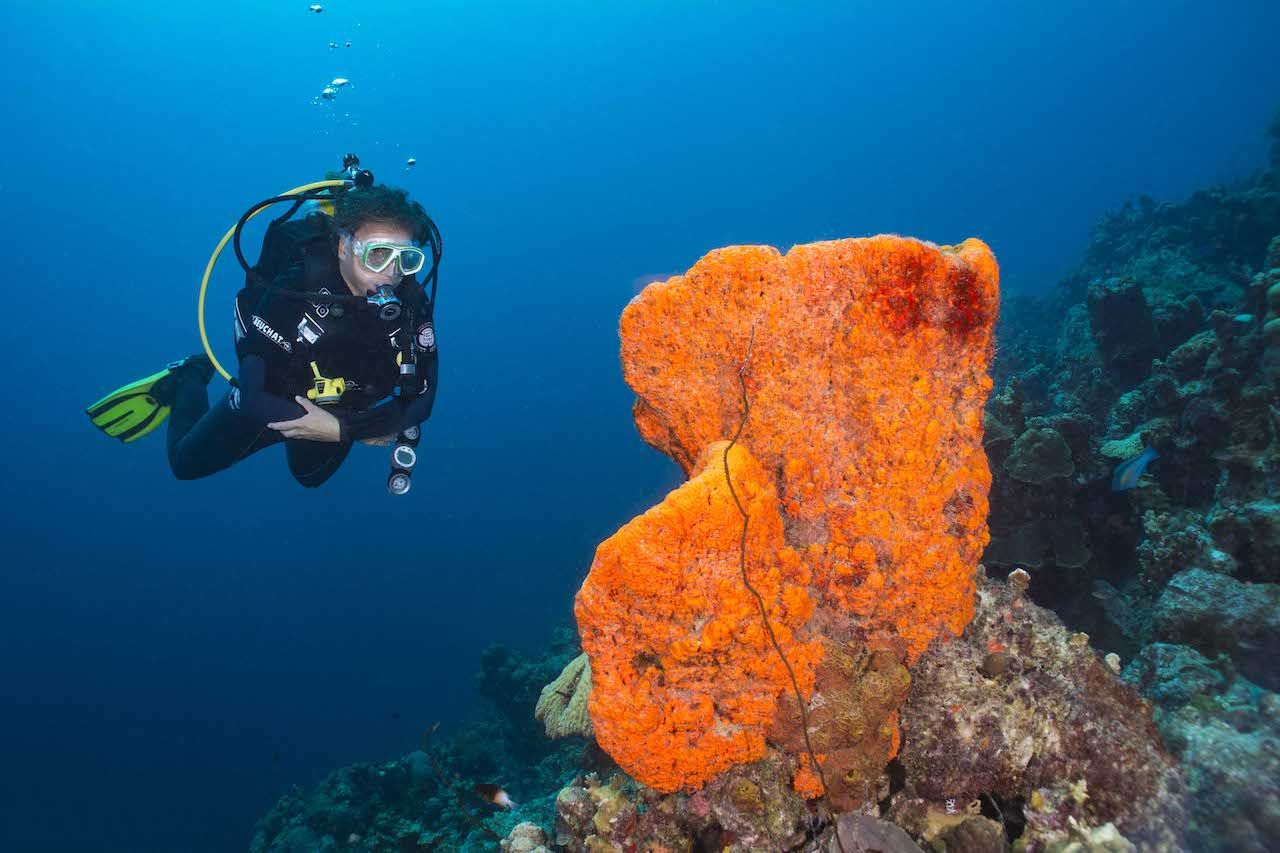 To his point, few dives go much deeper than 50 feet, and most can be experienced at 30 feet or less. Because the reef is also close to shore, you’ll never find yourself an unswimmable distance away.

Bonaire is also specifically designed with independent diving in mind. Dive Friends is among the largest operators on the island, with shops in major resorts like Delfins as well as other freestanding stores in town. Each shop is part of an island-wide tank refill program, where intrepid divers can roll up and trade in their empty tanks for full ones. The whole thing runs about $35 per day, and makes diving without a guide or boat trip simple.

Finally, Bonaire makes it easy to find its dive sites, as each one is marked by a yellow stone on the beach, located just off the main highway. So you can rent a car, load it up with gear and tanks, and traverse the island looking for the best places to dive without much difficulty. Because the dives are shallow, you won’t need long surface intervals, either. So if you like packing your days with as much diving as possible, Bonaire is where you want to be.

Hit the road and experience Bonaire, one gold rock at a time 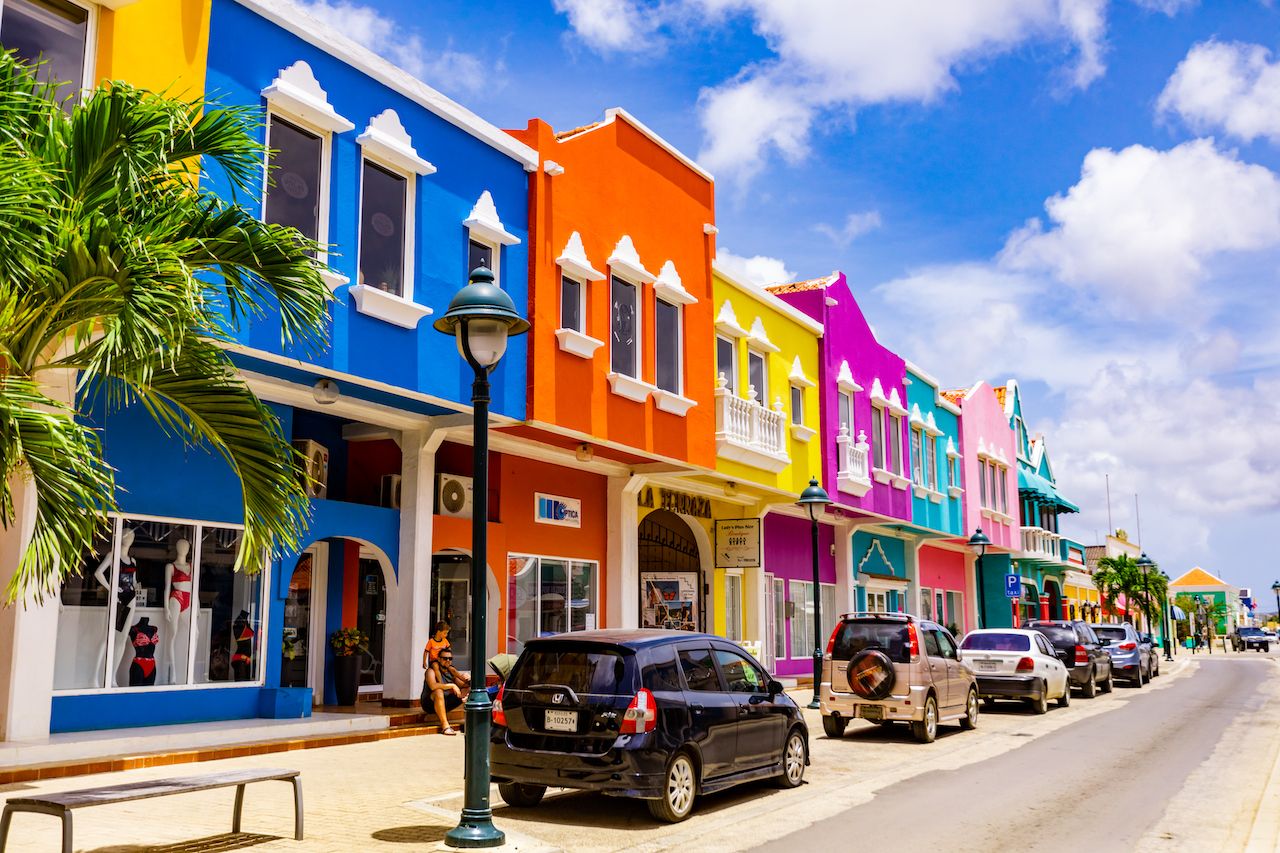 There’s really no right or wrong way to dive Bonaire. Most of the dives sit on the calmer west side of the island, and since visibility is pretty good here whenever you are able to go, you won’t need to hit them in any specific order. But if you’re struggling to figure out where to start, the Salt Pier is as good as anywhere.

Spotting the Salt Pier is pretty easy, as it sits adjacent to a skyline of 50-foot salt mounds. These are Bonaire’s famous salt pyramids that were mined from the island’s salt flats and shipped out from a large industrial pier near the island’s southern end. This pier, which is still fully operational, is also home to the Bonaire’s signature dive.

Starting out just south of the pier, swim out to its far southern end, then drop down about 17 to 20 feet. From there, you’ll swim through the pier’s pylons alongside eels, parrotfish, and the occasional squid. The quantity of marine life here is spectacular, too, as schools are drawn by the cool darkness cast by the pier’s shadows.

After exiting the water, you’ll likely come across another group parked near you, preparing to enter the water, just as I did.

“How’s the viz?” a middle-aged man with a New York accent asked as I unloaded my tank into my car.

“Great! You’re gonna love it!” I said. “Where you guys been today?”

“We were over at Red Slave,” he said. “Saw some turtles over there, I think they’re hanging around all day.” 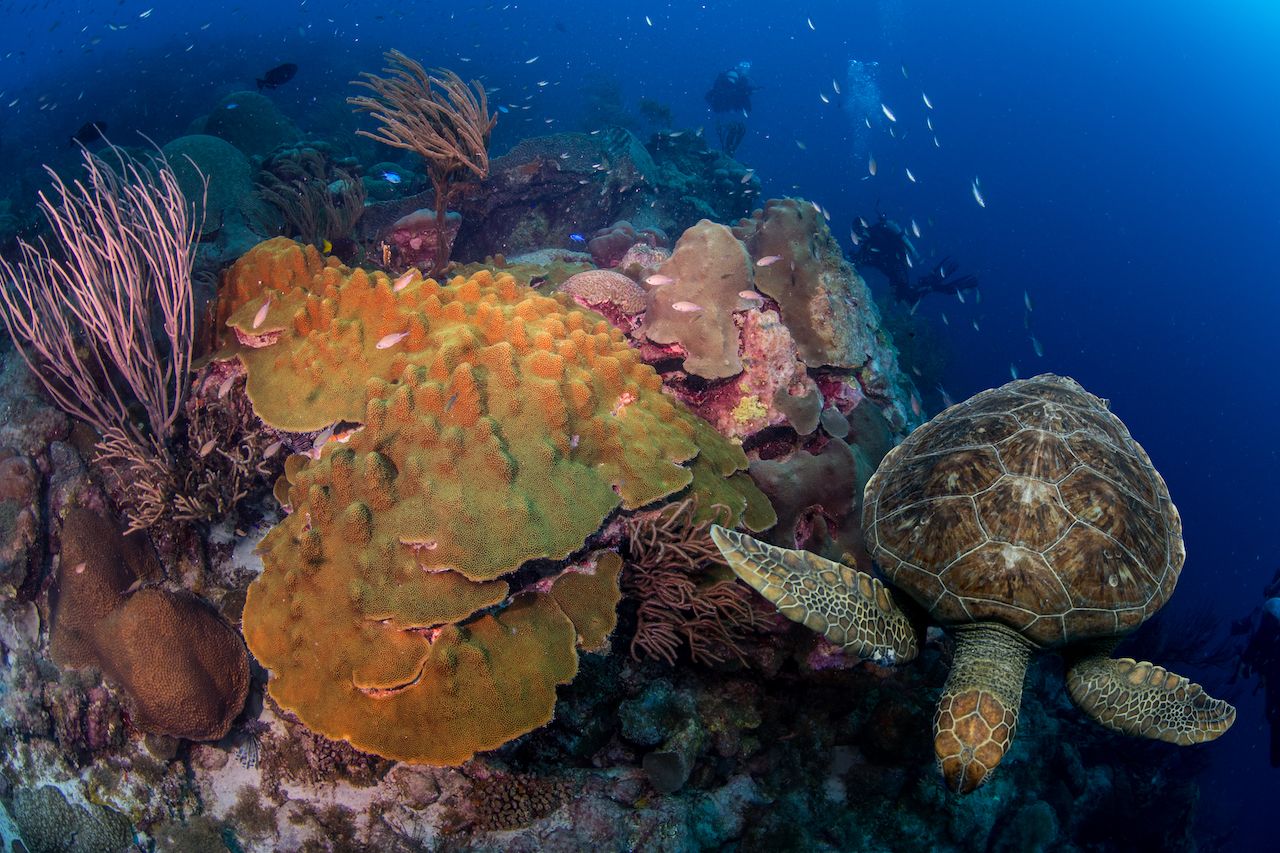 Such is the nature of divers’ camaraderie in Bonaire, similar to what you’d find from backpackers along the Appalachian trail, or hunters in late-fall Nebraska. If you’re diving Bonaire, you’re likely an enthusiast, and because of that you have an instant bond with almost anyone you meet. It’s kind of like a band-themed cruise, but instead of Heart you’re seeing actual barracuda.

From there, myself and the crew I was diving with took the New Yorker’s suggestion and headed to Red Slave, a dive site marked by the concrete huts set right on the shore that gets its name from the fact that the buildings once served as quarters for enslaved people who worked the eighteenth-century salt mines. There were turtles swimming there, along with an abundance of fish similar to what we saw under the Salt Pier.

About five minutes up the road, we stopped at the beach in front of Bonaire’s best wreck dive, the Hilma Hooker. The wreck is bookended by boat moorings less than 100 feet from shore. The dive area ranges from 60 to 100 feet, so it’s best done by more-experienced divers. It’s a fascinating look at how nature takes over once artificial objects are left to its mercy.

Other dive sites include 1,000 Steps, set just outside Washington Slagbaai National Park. While the trip down to the beach is not a full thousand steps long, the 64 stairs down are still a strenuous journey in full dive gear. The payoff is worth it, though, as you’ll finish on one of the most stunning beaches in the Caribbean. Inside the water, you’ll find towering pagodas of star coral near the boat moorings. Among them, sergeant majors, turtles, rays, and the occasional shark are common sightings. Not far from here you can also hit Bari Reef, where more than 300 species of fish have been sighted.

The shore diving capital of the world isn’t limited to shore diving, though. At Klein Bonaire, the small island just off the capital of Kralendijk, you’ll find the highest concentration of marine life in Bonaire. A short, pleasant boat ride takes you to sites like Forest and Monte’s Divi Tree, which boast thick schools of diverse fish and your best chance to spot sea horses.

Bonaire is one of the world’s most affordable dive destinations, too 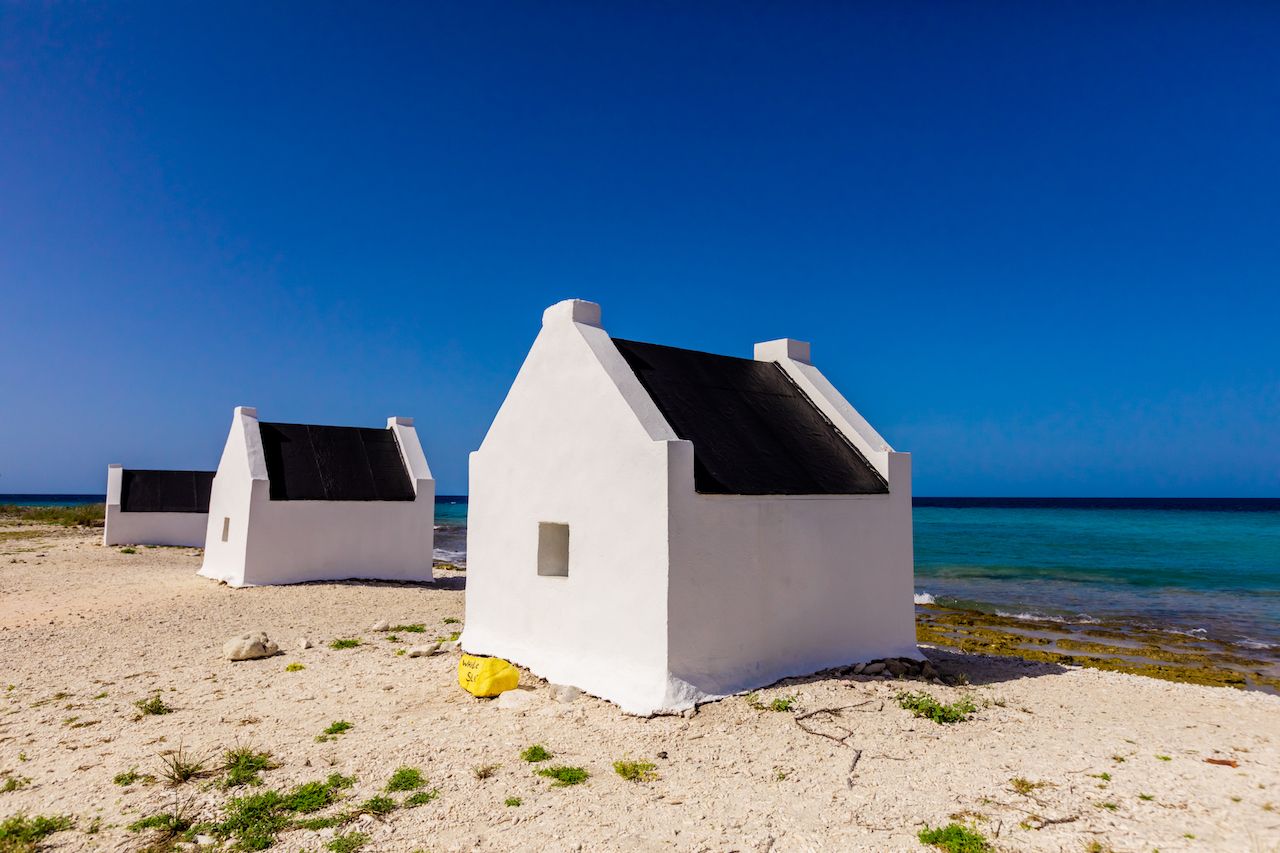 Perhaps the best thing about diving Bonaire is that it can be done (relatively) affordably. Though it’s important to know that the Dutch Caribbean should never be confused with a budget destination. Still, compared to other Caribbean islands where hotel rooms cost $300 a night and a 2-tank dive trip can cost just as much, Bonaire is a downright bargain.

I stayed at the Delfins Beach resort, a 4-star spot with a private beach and dive pier. Here, most rooms are full suites with kitchenettes and separate living rooms. Rates at the time of my visit started at less than $200 a night. Shore diving is free, and if you need to rent gear you can get a full set for $50 a day, or about $250 for a full week. Tanks are $35 a day, and offer air or Nitrox.

Meals weren’t outrageous either, with an average meal for two people on the island running about $80 to $100. Drinks were about the same – scoring a couple of cocktails for $10 wasn’t impossible, and even the island’s top cocktail bar, Tiki & Co., has few creations over $10 a drink.

Before you plan on the solo dive trip of a lifetime, remember diving is never a solo sport. If you’re planning to go by yourself, you’ll either need to meet people to dive with or bring a guide. And this kind of unsupervised diving odyssey should only be undertaken by experienced, certified divers, who know what they’re doing and feel comfortable going down 30 to 40 feet.

Assuming all that holds, Bonaire is going to be the best dive vacation you ever take. From the thousands of fish, to fantastic visibility, to DIY diving at reasonable prices, it’s hands down the best Caribbean island for the avid diver. And even for those who aren’t, it’s a gem where the greatest treasures lie underwater.

Diving9 Underwater Cities Only Scuba Divers Can Explore
Tagged
Diving
What did you think of this story?
Meh
Good
Awesome