K2 is known as the “savage mountain.” At 28,251 feet, this Karakoram peak is the world’s second tallest, behind only Mount Everest, but it is the world’s toughest mountain to climb. The new film Breathtaking: K2 – The World’s Most Dangerous Mountain stars renowned Eddie Bauer alpine climbing guides Adrian Ballinger and Carla Perez, along with photographer Esteban “Topo” Mena, in their attempt to summit the world’s second-highest mountain without supplemental oxygen.

The journey follows the pair through sickness and setbacks, including extreme weather and last-minute negotiations with striking sherpas, putting into vivid detail why K2 is the most dangerous mountain. With fewer people knowing about K2 versus Mount Everest, there’s a lot to learn from this film, particularly for the summit-curious and anyone planning an expedition outside their comfort zone. Here are nine of the most interesting things we took away from the film.

1. More people have been to outer space than have stood on the top of K2.

Fewer than 400 people have reached the summit. Achille Compagnoni and Lino Lacedelli were the first, standing on the peak on July 31, 1954. The expedition featured in Breathtaking: K2 had its own first: Perez became the first woman to summit both K2 and Everest in the same year, and the first from the Americas to summit K2 without supplemental oxygen. Ballinger became the fourth American to do so.

All 14 lie in the Himalaya and Karakoram ranges of Asia, in what is known in the mountaineering world as the “death zone.” These imposing mountain ranges not only form international borders, but they also stand as a nearly impenetrable force of natural power that dwarfs the mountains of every other continent. At 28,251 feat, K2 towers above Denali (20,308’), Aconcagua (22,841’), Mount Elbrus (18,510’), Kilimanjaro (19,341’), and Mount Wilhelm (14,793’), the highest peaks in North America, South America, Europe, Africa, and Oceania, respectively.

3. One person has died attempting to climb K2 for every four who reach the summit and live to tell the tale

K2 has the second-highest fatality rate of all 8,000-meter peaks, behind only Annapurna. Eighty-six people have died attempting to summit the mountain. A fateful expedition in 2008 took the lives of 11 climbers in a single day. Nearly all expeditions to the summit happen in spring or summer — as the winter high is around -15 degrees Fahrenheit and both wind and snow conditions can be extremely dangerous. 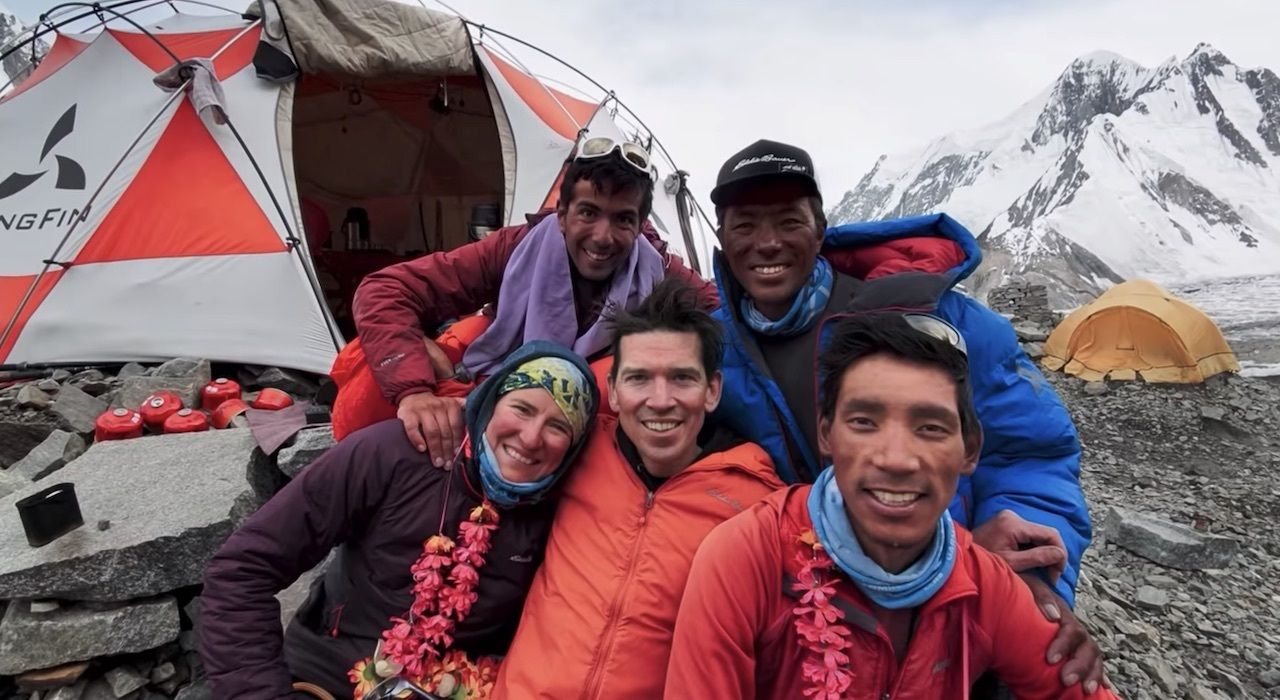 4. Months-long climbing expeditions can be derailed in minutes, often just shy of the summit.

Conditions near the summit aren’t known until they’re reached, and only then can a final decision be made — in the climbing film Meru, for example, mountaineers Conrad Anker and Jimmy Chin pull the plug on their first summit attempt of the 21,850-foot Meru peak with the goal in sight, having to return years later to finally reach the summit. Breathtaking highlights a successful expedition that almost wasn’t. As both Ballinger and Perez battled stomach illness, the weather above them roared to the point that nearly all other expeditions touring during that time turned back. By waiting an extra night before the final summit push, Ballinger and Perez saved the fate of their mission.

5. Your success is based as much on your crew as yourself.

A climbing crew is only as strong as its weakest member. Professional mountaineers like Ballinger and Perez vet potential climbing partners thoroughly before ever inviting them on a serious expedition like K2. While attempting to negotiate with a crew of sherpas to carry their gear, the team learns that the sherpas have gone on strike due to poor treatment by the previous group they worked with. It took a long negotiation — the promise of an excellent tip at the end of the trip — to convince the crew to change their minds. If the sherpas had said no, the mission wouldn’t have been able to proceed.

The same is true of Ballinger and Perez. If the stomach illness that plagued either had progressed to a point where one couldn’t continue, the other would have been forced to pull the plug on the mission.

Even when thought up by only one or two people, monumental feats like this are a team effort. When trust is the most valuable commodity one can offer, each person’s life is in the hands of their teammates. 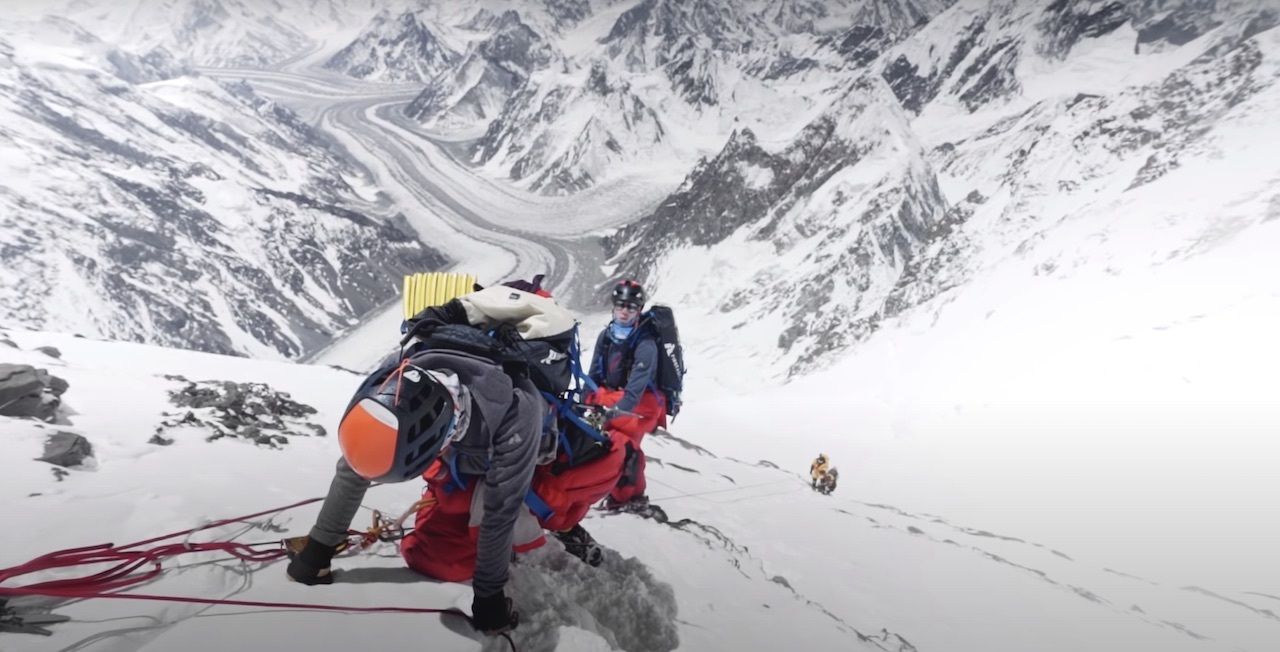 The crew had planned to rest for a week at base camp to prepare. But Mother Nature had other plans. A disturbing weather report from their meteorologists showed only a four-day window to reach the summit and return, or else they’d have come all this way for nothing.

“I’ve told myself that failure’s okay, and that we all fail and we all keep taking these small steps towards success,” Ballinger says as the crew weighs whether or not to pull the plug due to weather, after already making base camp. “Hopefully it comes, and even when it doesn’t, the experiences are really, really powerful.”

The group pulled it together, with Ballinger resting an extra day at base camp before pushing to Camp 3. They spent five hours under a massive overhang, crossed dangerous seracs on the glacier, and passed through a high-risk avalanche field in what would ultimately be a successful push to the summit.

7. The most important factor in mountaineering is being able to listen to the mountain.

As Ballinger says in the film, mountaineers must “go until the mountain tells me I can’t go anymore.” Ask any experienced mountaineer and they’re sure to agree — you can plan a climbing expedition to the “T,” but the mountain has the final say on whether or not a summit push is successful. This K2 expedition was more fortunate. Exasperated and nearly out of breath near the top, Ballinger exclaims, “Sure enough, it’s been wind-hammered, lots of ice showing now, it’s got plenty of exposure to ice falls. But it’s feeling pretty darn OK.”

The Tibetan prayer flags fluttered in the wind as Ballinger, Perez, and the crew approached the summit. The feeling of accomplishment is visible on the faces of the entire crew as they stand atop K2. Ballinger is near tears. They had overcome seracs, avalanche danger, sickness, and extreme weather.

“Trying not to cry,” he says. “I can’t believe it. We’re on the summit of the second tallest mountain in the world. 8,611 meters. K2! Unbelievable. Ninety-five percent of people went home, and now we’re on top alone on this perfect summit day.”

9. The journey isn’t over at the summit.

The crew celebrates their successful summit push at the top, basking in near-breathless revelry. Ballinger notes, however, that they still have to get down before the real celebration can begin back at basecamp. And while the most dangerous part had been conquered, the crew still had to maintain focus and not let their guard down until safely reaching base camp.

HikingHow To Summit a Mountain That Doesn’t Have a Trail
Tagged
Climbing Documentaries Movies
What did you think of this story?
Meh
Good
Awesome