Immigration is so important in Argentina that the preamble of the country’s constitution, written in 1853, states the law foundations “for all people who desire to inhabit Argentina.” Multiple waves of migrants have arrived in the country since Juan Díaz de Solís docked at Río de la Plata in 1516. Many, if not most, have come through the country’s most important port in Buenos Aires.

It was between the late 19th and early 20th centuries when most European migrants came to the city, escaping economic hardships and eventually, World War I and II. Enough Italian and Spanish immigrants fled to Argentina that they came to form nearly 30 percent of the country’s entire population. This is why many Argentinians have European ancestors. The language, food, and customs are proof of this.

The flexible immigration laws, as well as free public education and healthcare, that remain to this day presented an appealing choice not only for Spanish and Italians but also for Asians, other Europeans, and fellow Latin Americans looking for a new bright future. Buenos Aires became a major hub for cultural diversity and to get to know the real Buenos Aires, you can’t miss its multicultural collectivities. Here are some of the most prominent ones you need to experience.

Chinese immigrants built one of South America’s most lively Chinatowns. 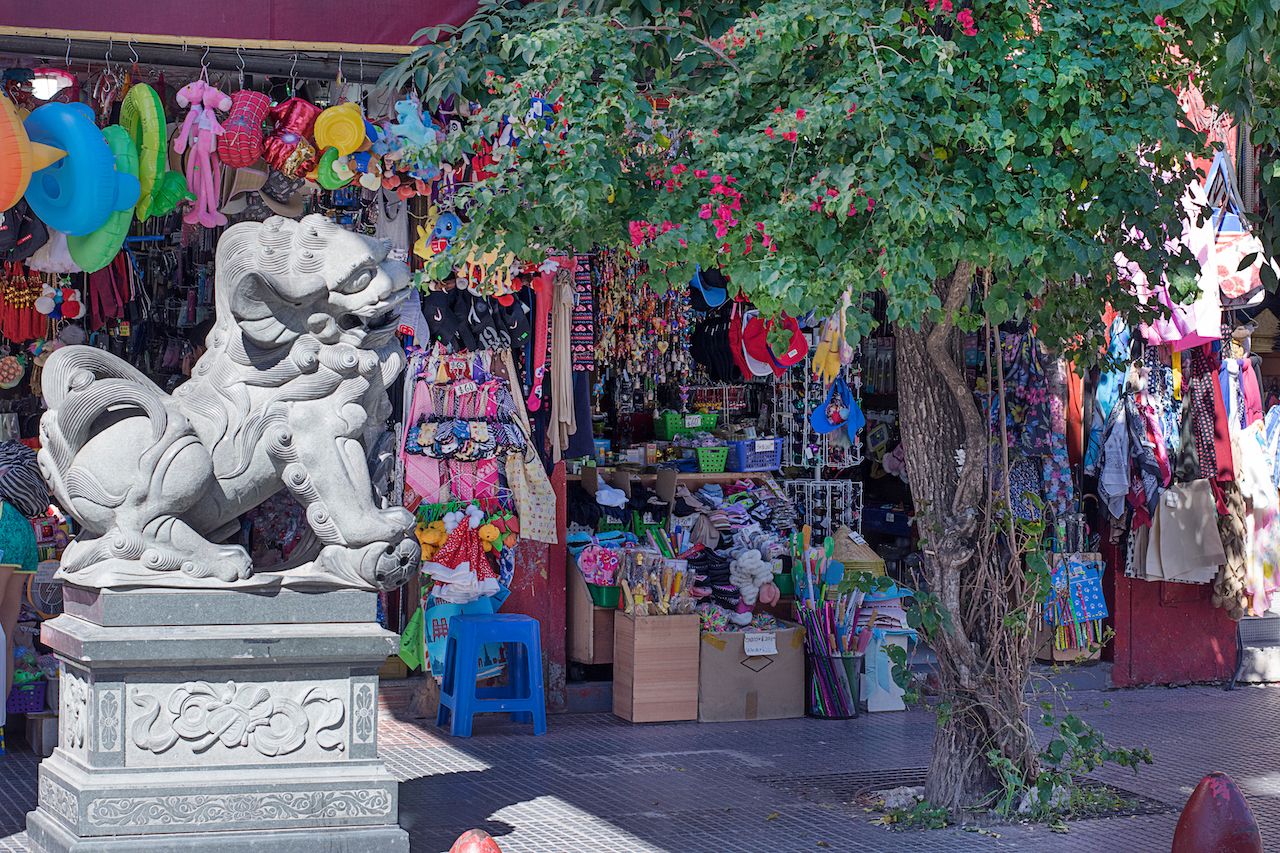 Chinese migration to Argentina started in the early 19th century and continued in waves throughout the ensuing decades, and they settled widely throughout Buenos Aires. They immediately made their presence known, opening supermarkets in nearly every neighborhood that became the go-to place for daily grocery shopping for most residents. It is said that there is one Chinese supermarket every three blocks in Buenos Aires, and you’d be hard pressed to disprove this theory.

Although Chinese people often live near their own supermarkets and not in a specific part of the town, a thriving Chinatown has grown in the Belgrano neighborhood, near the Colegiales and Palermo neighborhoods, lined with shops, a diverse collection of restaurants, and markets where you can find imported goods and food that are hard to find elsewhere in the city. You could easily spend hours in Chinatown buying fun, cheap trinkets while eating delicious snacks out of the hole-in-the-wall shops, and if you go, be sure to stop at either Todos Contentos for dim sum or Cantina Chinatown for incredible chop suey.

Strolling through Little Korea makes for a great afternoon. 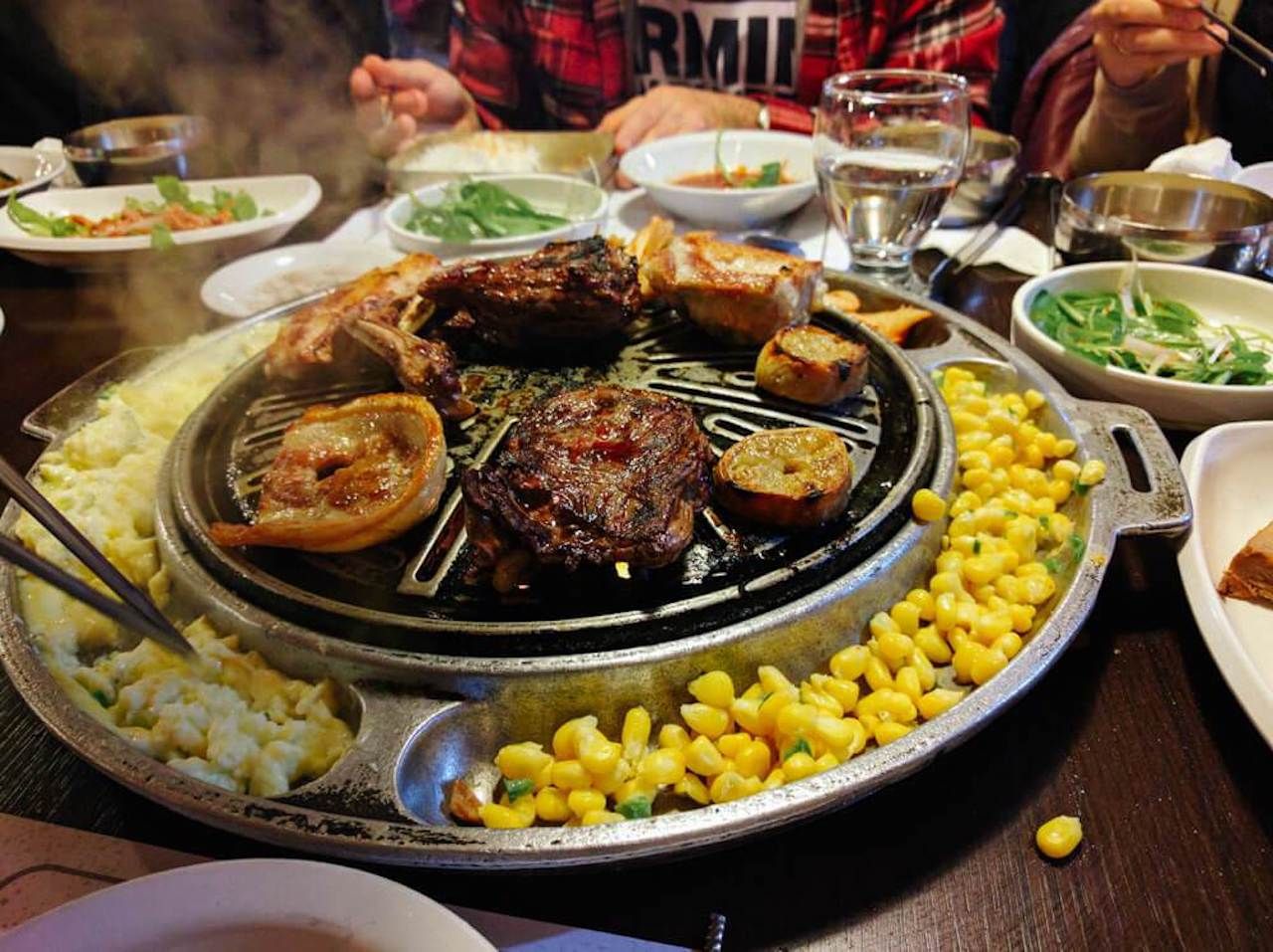 Located in the Bajo Flores neighborhood, Buenos Aires’ Little Korea gathers much of the Korean collectivity that started arriving in the country from the mid-1960s until the ‘90s. Little Korea, also known as Baekgu — which means “109” because of the bus that used to go through there — is a three-block stretch that goes all the way through Carabobo Street as it turns into Corea Street between Eva Perón Avenue and Castañares Avenue. It’s like nowhere else in the city. Street signs are written in Korean, markets hawk solely Korean goods, and opportunities for an impromptu afternoon karaoke session abound. You’ll find both Christian churches and Buddhist temples, though the area is not the safest part of town so visit during the day, where you can make a lunch reservation at Una Canción Coreana or drink coffee with some Korean sweets at Pan Moa. You can also take a taxi to grab some dinner at a Korean barbecue at Restaurante Yugane.

Japanese collectivity runs throughout the city. 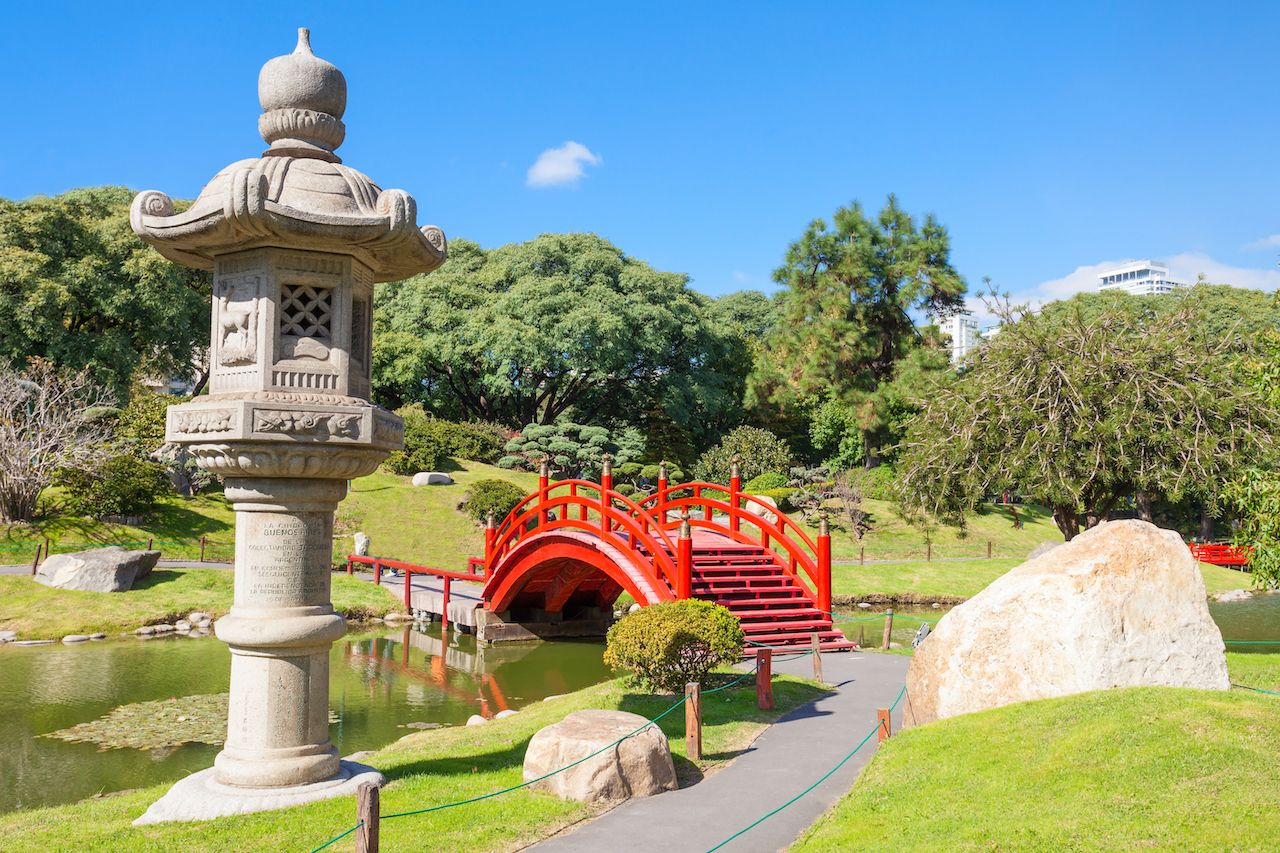 Between 1920 and 1970 the Japanese arrived in Argentina and started working mainly in the agricultural fields in the countryside. In Buenos Aires, many opened dry-cleaning shops and nowadays, many of these dry-cleaning places are closing down as new generations of Japanese-Argentinians turn to gastronomy. You can see this playing out in real-time throughout town — in the newly opened restaurant Tintorería Yafuso, which translates to “Dry Cleaner Yafuso,” for instance. This dry cleaner in the Villa Crespo neighborhood was in operation for more than 30 years by the Yafuso family. When they closed it down, Fabian, the family’s son, decided to open a restaurant built around authentic Japanese food served in a setting where you can still see the remains of the dry-cleaning equipment. Located just outside Palermo and San Telmo, this tiny restaurant serves only 20 people per night in two shifts. Make sure you have a reservation in advance as it can be hard to find a table.

Although the Japanese are not settled in a specific part of town, many restaurants and cultural centers flourished around the National Congress. The most impressive sample of Japanese culture in Buenos Aires can be found in the Japanese Garden. Created as a testimony to the friendship between the two countries and to mark the first visit of the Japanese imperial family, it was erected in 1967 and is considered one of the biggest Japanese gardens outside of Japan. It’s a unique respite in the heart of a massive city and has become the typical place for a Sunday family stroll for locals and tourists alike. The garden is home to different activities such as cosplay competitions, martial arts performances, and origami and painting workshops.

Argentina is home to the largest Bolivian population outside of Bolivia. 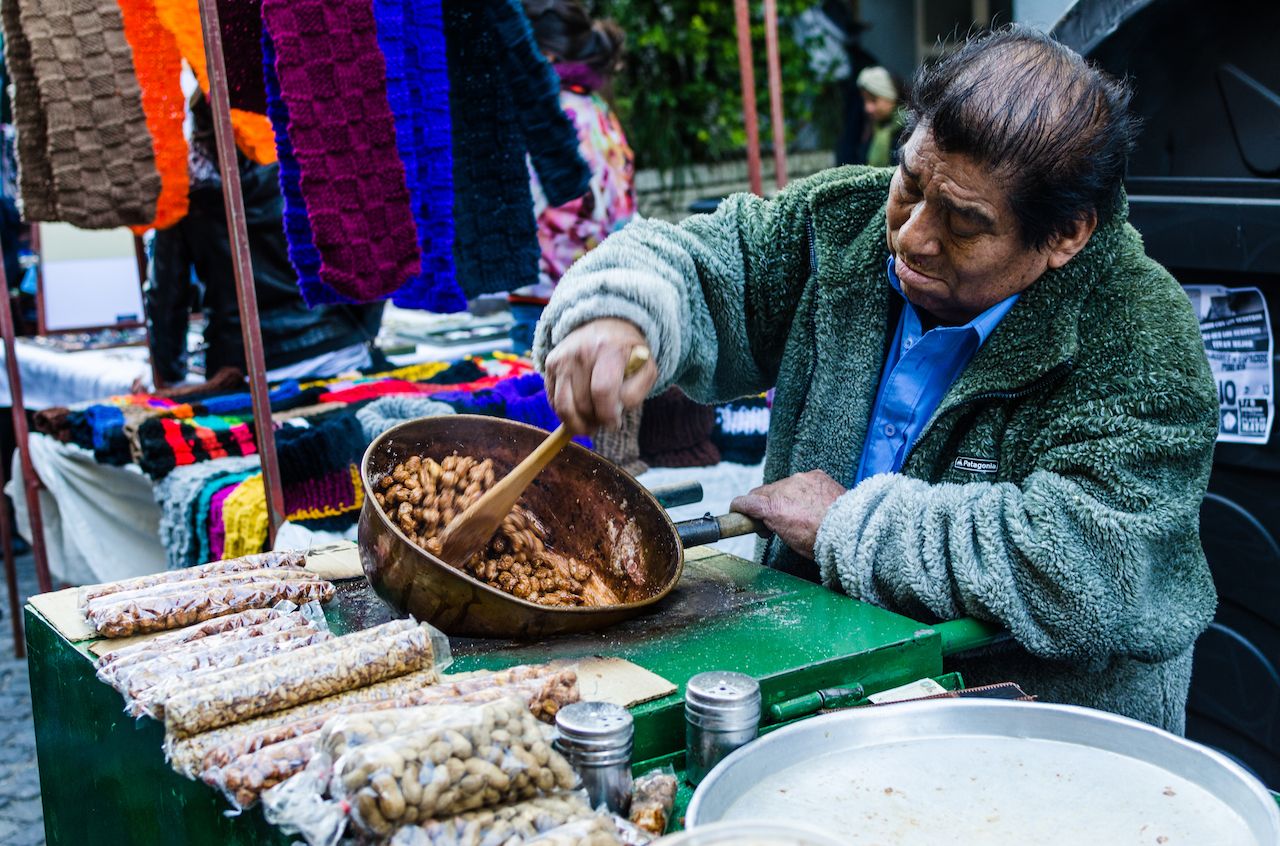 Bolivian migration to Argentina has existed from colonial times but has grown steadily since the 1940s. The largest Bolivian community in the world outside of Bolivia is now located in Argentina, settled in both the north of the country as well as in Buenos Aires — primarily in Liniers, the neighborhood where the daily Bolivian market takes place.

There used to be people on the street hawking their goods, but due to strict government regulations, vendors are now housed in small shops, one next to the other, where they sell crafts, delicious fruits, vegetables, and spices that you won’t find anywhere else in town. Treat yourself with a salteña — a juicy, spicy Bolivian empanada — while ambling along the colorful streets. It’s open every day from around 9:00 AM to 7:00 PM, although weekdays in the morning are best if you want to avoid the weekend crowds. Located in the west of the city, the market is off the beaten track but you can get there by the Sarmiento train line or many buses such as the 34 and 166 from the so-called Palermo Hollywood. 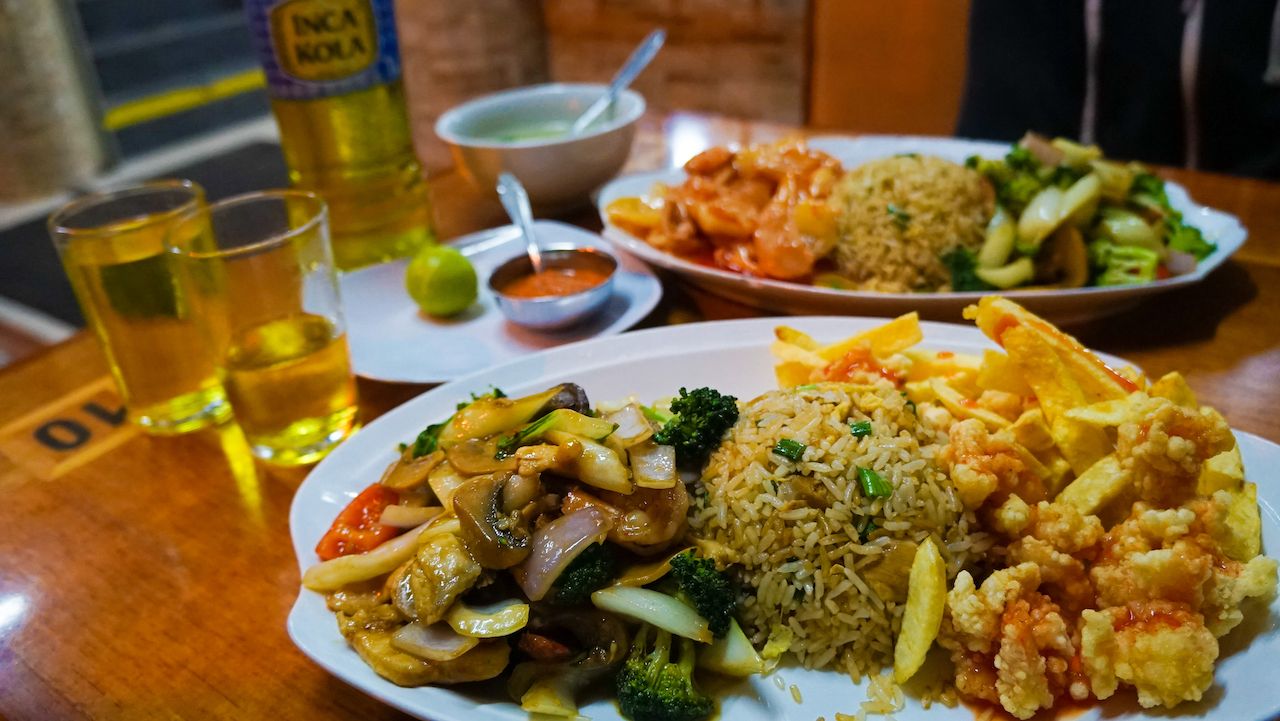 Peruvian migration to Argentina was practically nonexistent before the 1980s but grew rapidly during the following decades. Now, Peruvians make up the fourth-largest immigrant population in the country. Most Peruvians are located in Balvanera neighborhood, and many have opened restaurants that now are the go-to place if you are looking for some delicious ceviche or ají de gallina. You can even find spots to eat “Chifa” food, a fusion of Cantonese and Peruvian food that is tough to find outside of South America. Lung Fung and Chifa Man San are great places where you can taste the merging of these two culinary cultures. 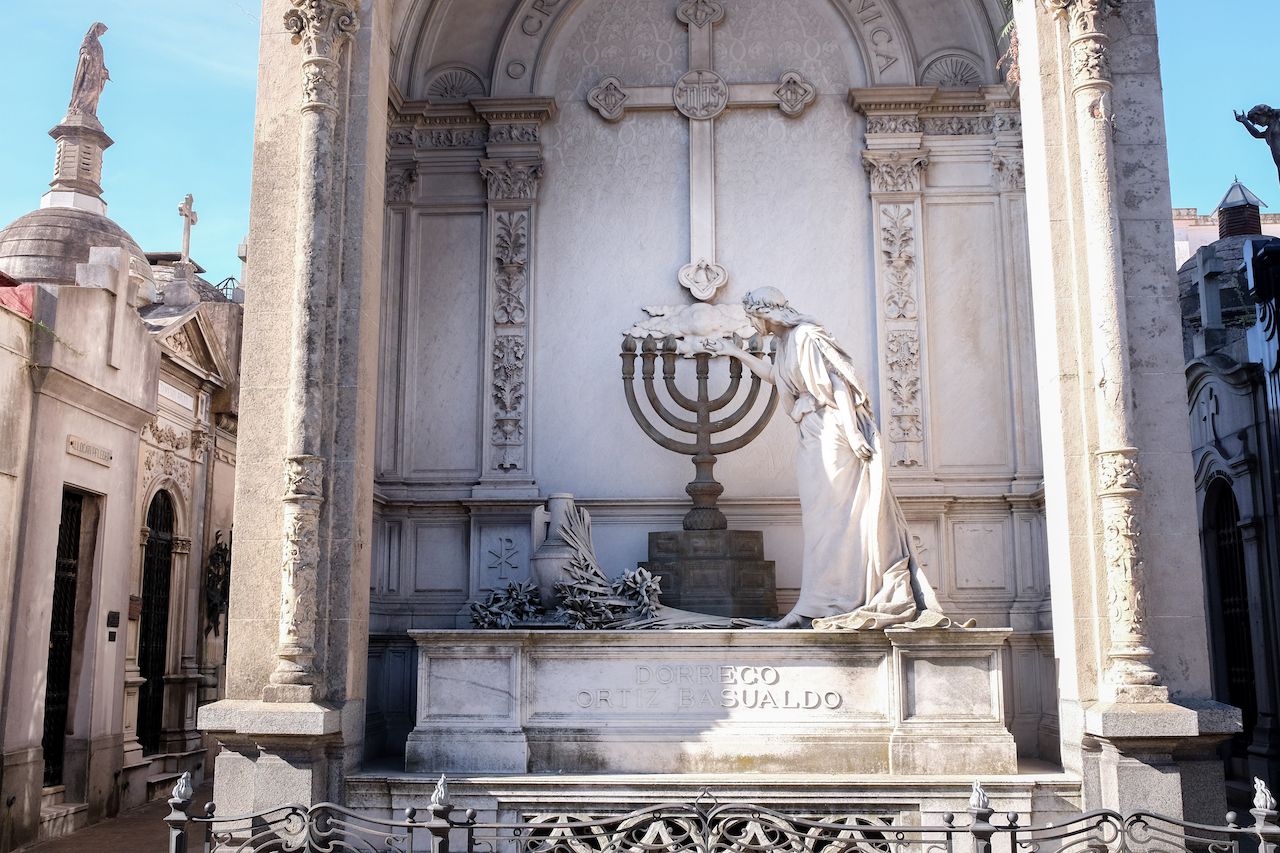 Balvanera, along with Villa Crespo, housed Buenos Aires’ Jewish community ever since they began arriving in the 1850s. Between 1889-1914, 1920-1930, and 1930-1948, migration waves accelerated until the city had the largest Jewish community in Latin America. Nowadays, about 250,000 Jews live in Argentina, and 80 percent live in urban areas. In both neighborhoods, you can find Jewish schools, restaurants, and temples, the most important of which is the Synagogue of the Israelite Argentine Congregation close to the city center. This was the first synagogue in Buenos Aires; its construction began in 1897 and took 35 years to complete. The incredible building merits a visit as it also houses the Jewish Museum of Buenos Aires.

You can dine for a good cause with the Armenian community. 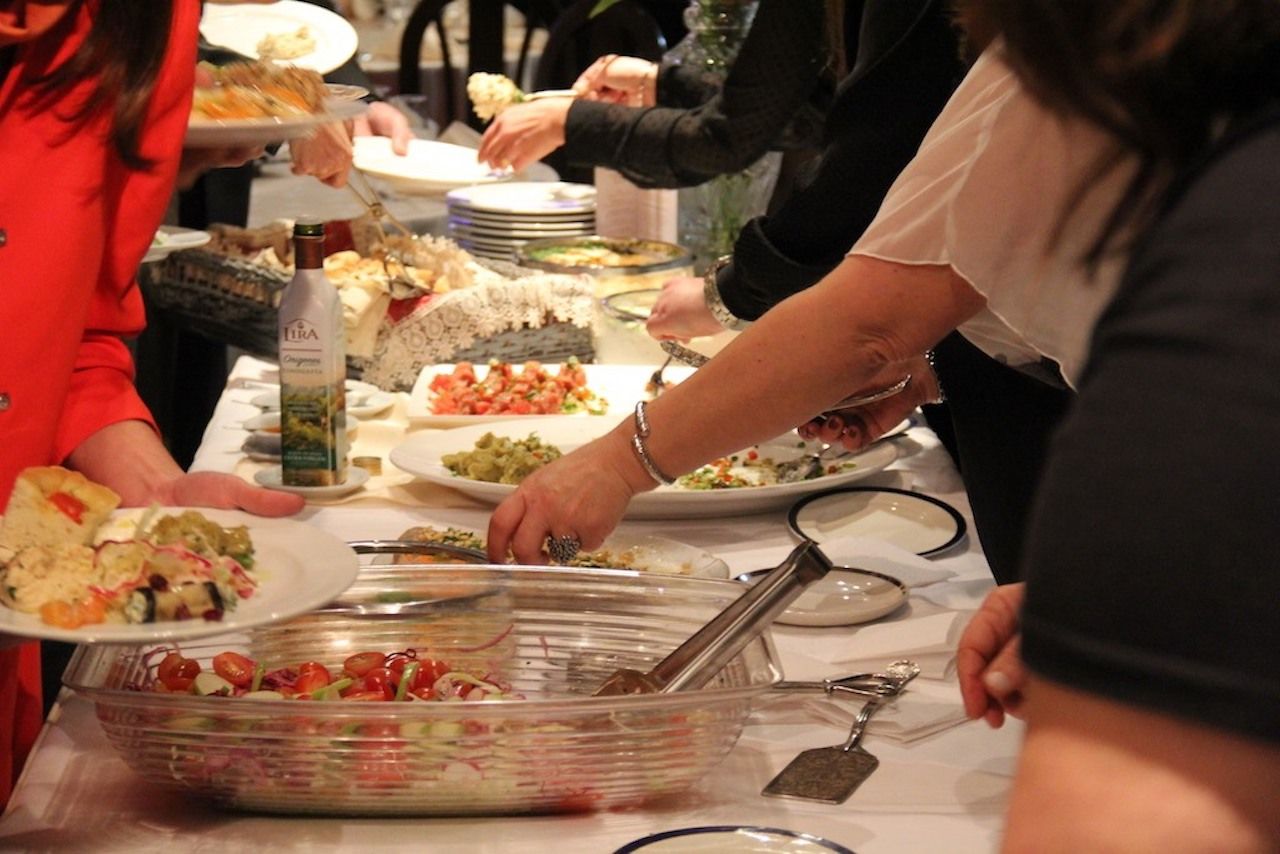 Armenians arrived in Buenos Aires largely in the first two decades of the 19th century and took root in the Palermo neighborhood. A short walk through Armenia Street will show you schools, cultural centers, and beautiful churches, such as the St. Gregory the Illuminator Cathedral, that are worth a visit. Many Armenian restaurants can be found in the area, the most important ones being Sarkis, with the best falafel you will ever taste, and inside UGAB (Unión General Armenia de Beneficencia). This Armenian school houses a restaurant where you’ll be waited on by the teenage students and cooked for by their parents. The money raised here is used by the graduates to go on a trip to Armenia, an operation taking place since 1979. Make sure you are there at 10:00 PM — that is when the students also dance to typical Armenian music for the diners.