In Cappadocia, Turkiye, (formerly spelled “Turkey”), hot air ballooning is only the beginning.

As you gaze out from the basket of your hot air balloon, you’ll witness the first rays of light touch Cappadocia’s distant hills. It soon illuminates canyons, canonical spires, and sprawling orchards. At one point, you may gasp at the sudden realization that you’re in the sky. For as captivating as is the view, equally magical is the sensation. Or, rather, the lack of it.

The myriad colorful balloons that launch from Göreme Valley do so in the predawn darkness. At this early hour, the wind is usually light, and currents that rise from the ground, called thermals, are rare. Your engine-less balloon, pushed upwards by occasional blasts of the burner, will drift along with whatever gentle drafts there are – so you won’t feel wind nor much movement. Only the landscape pulling away from you belies the stillness.

After your Cappadocia hot-air balloon ride, you’ll be ready for a Turkish morning meal, the best breakfast in the world. For the rest of your day, the options are abundant – from exploring caves and riding horses to skiing on a volcano. Here’s what you absolutely must do in Cappadocia. They’re worth the early wake-up call. Note that most of these activities start in and around Göreme, the main tourist town in the region of Cappadocia.

Cappadocia hot-air ballooning: the perfect start to your day 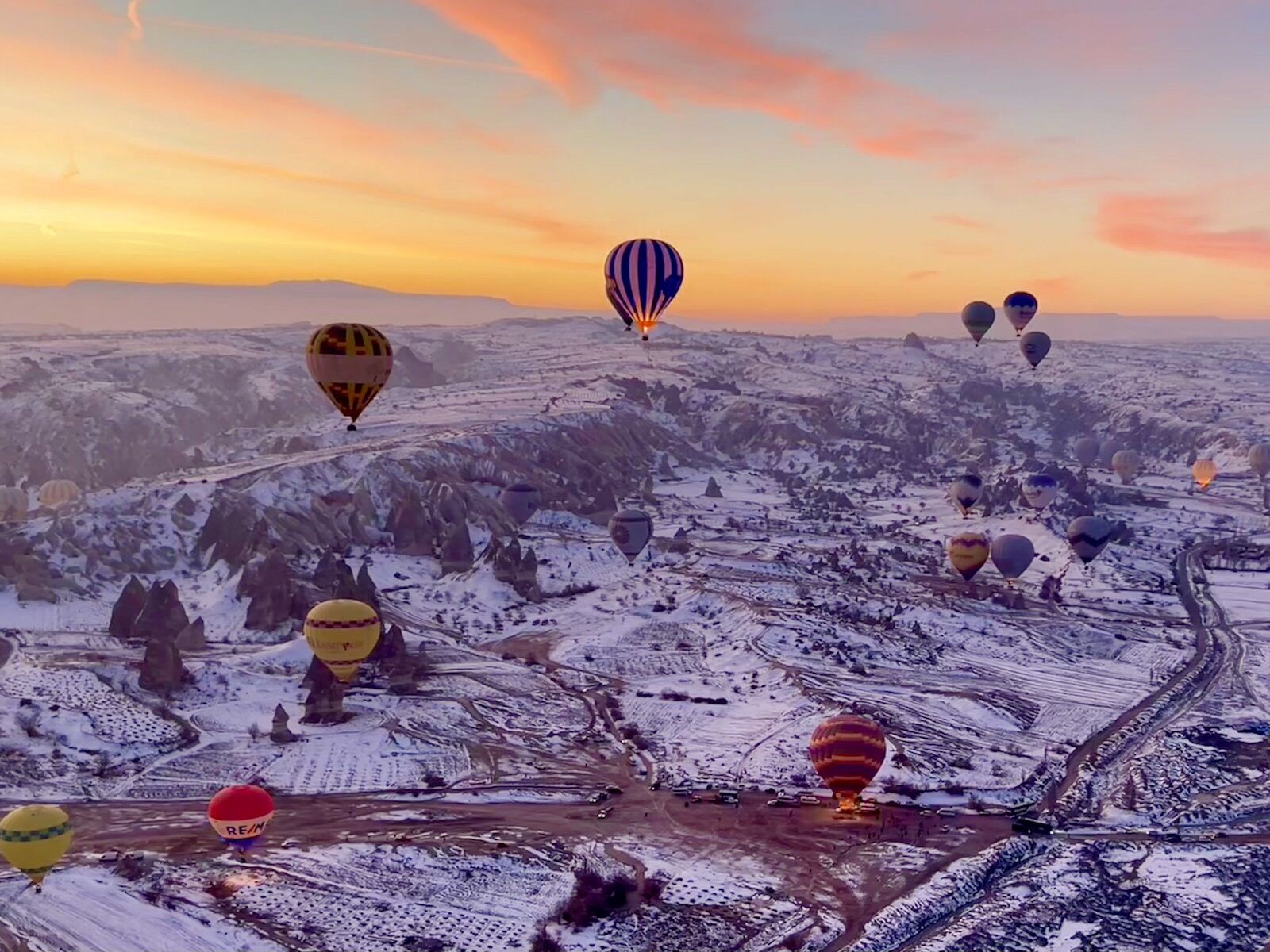 This winter, an hour-long Cappadocia hot-air balloon flight over the snow-covered landscape cost less than $75 per person with SkyWay Balloon. Although the sky was clear, I was glad for my thick jacket and layers that kept me warm in the icy temperatures. Only my fingers, ungloved to photograph the land’s unusual contours, needed some post-flight thawing.

As the sun crested the horizon, my attention was diverted inward by two happy passengers: a Turkish couple bathed in a golden glow. He had just quietly proposed, the precious ring still in his hand. I turned back to admire the sun-dappled view to give them some privacy, never getting over the beauty of the frosty vista or the dozens of bright hot air balloons around us.

It was only on the descent that something seemed oddly amiss as it looked like we were headed for a grove of apricot trees, their mid-winter branches looking ready to stab our basket and puncture our balloon.

But as we dropped ever lower, a man moved between the trees, grabbed the bulky rope tossed down by the pilot’s assistant, and began to pull us in the direction of a waiting truck. He was sweating and tugging as our pilot added bursts of the burner to keep us from touching down. Eventually, we did make it to our desired landing point – the back of a truck – though our basket did almost tip over before straightening out into a resting spot.

Most hot air balloon baskets hold a maximum of 12 people, including the pilot. You meet early — usually an hour before sunrise — to travel to the take-off site. After about 20 minutes of prep, you’ll be ready to lift off. Flights are available year-round and only canceled in case of inclement weather. 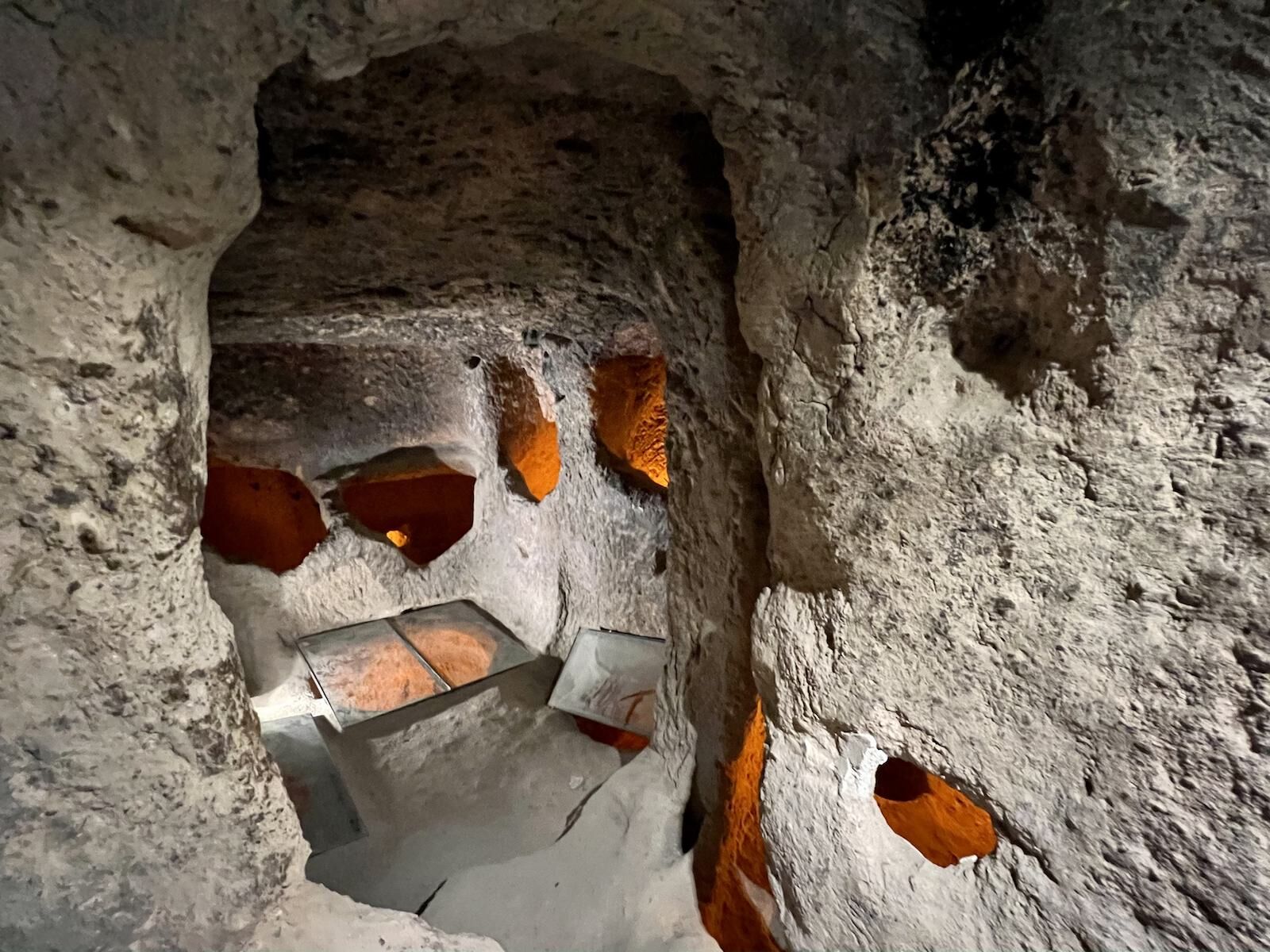 As exciting as it is to ascend high above the ground, in Cappadocia, it’s also a thrill to go below it. The landscape has two types of history to study – both geological and anthropological – and it’s fascinating to learn both.

Millions of years ago, a series of volcanic eruptions spewed layer upon layer of ash onto the land, which compacts into a tan-colored rock called tuff. That tuff was covered by a layer of basalt (formed from lava, not ash). Eventually, wind, weather, and cycles of water flow eroded away the softer tuff but not the basalt, which left fascinating tower-like formations in the landscape. They’re called “fairy chimneys” and are Dr. Seuss-esque towers dotting the region’s surroundings.

Fast forward to the sixth century, when Christians in the area were persecuted by various armies and invaders from countries to its east. The soft rock was an asset for keeping them safe as they were able to use metal tools to carve underground caverns by hand. It didn’t take long for the caverns to resemble entire subterranean cities.

You can see this at Kaymakli Underground City, complete with small rooms for storing livestock, making wine, storing food, sleeping, meeting, and praying. There are also plenty of airways connecting to the surface and passages leading downward to the aquifers. The city reaches eight floors below the earth, but visitors can only explore four – but it’s enough to leave you stunned by the sheer extent of the city’s reach. The city is about 30 minutes by car from Göreme. If you arrive without a guide, you’ll be able to hire one outside the entrance. Signage is very light, so you’ll want to go with a guide to understand what you’re looking at.

The underground dens were temporary, and Christians could practice above ground in times of peace. A place to see some of these ancient monasteries carved out of rock above ground is the Göreme Open-Air Museum. It’s in a canyon that served as a monastery and is dotted with ancient chapels, some several rooms large. It’s a serene place to spend two hours walking and admiring the view. Inside the ancient churches, you’ll find pastel-toned frescoes still painted on the domed ceilings and walls. 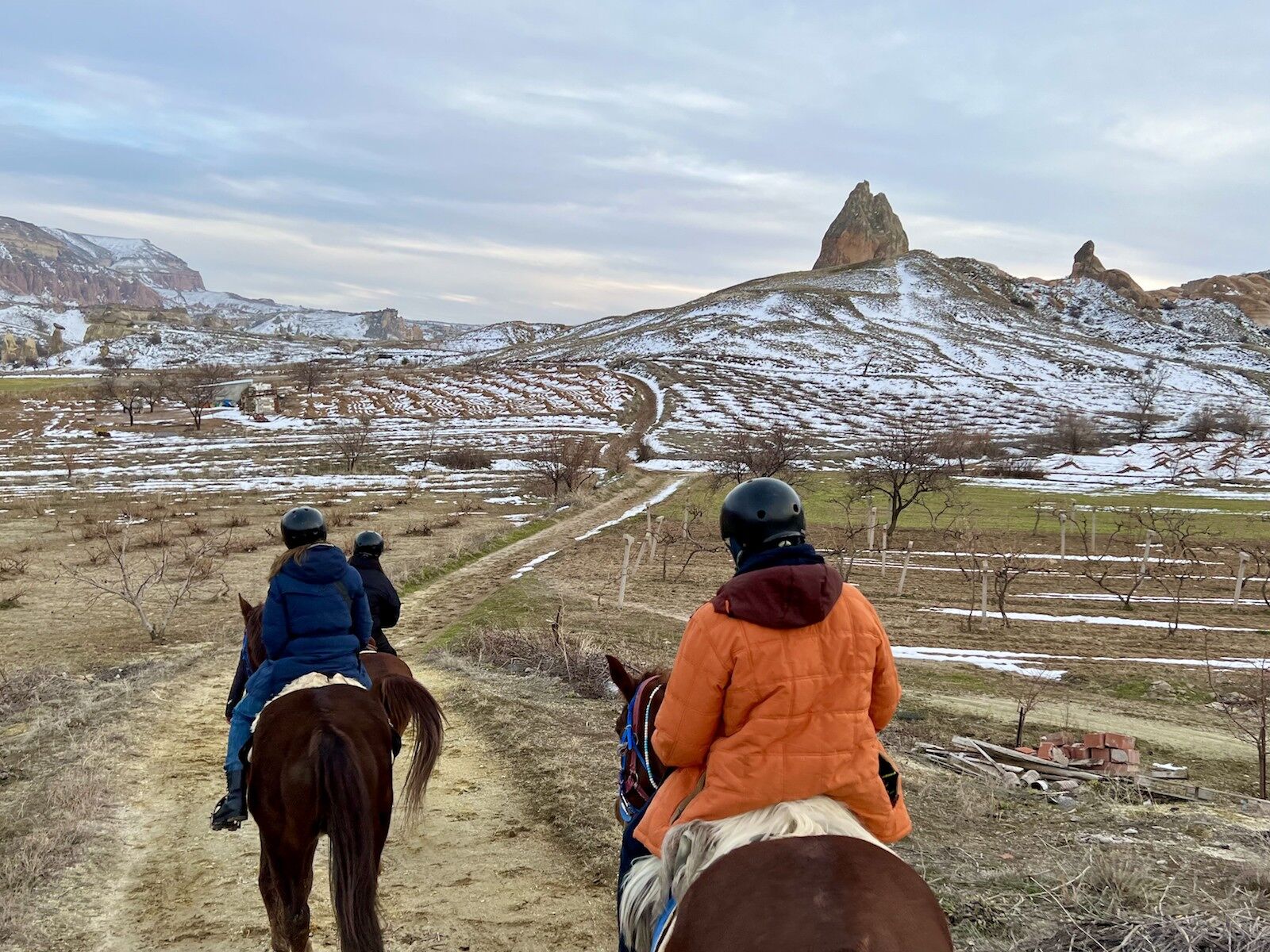 While Cappadocia hot air ballooning happens at dawn, going for a horseback ride is a good late afternoon activity. Novice horse riders will appreciate the one-hour loop offered by Cappadocia Horse Tours in an open area near Göreme, where you can enjoy the peaceful view and bond with your horse – mine was named Bella, and once she and I got used to one another, it was a great way to unwind before dinner. For a longer excursion, consider the two-hour sunset tour from Moonlight Horse Ranch. It takes you past a monastery and an old Greek village, but the highlight is riding to Rose Valley to see the changing colors during sunset. 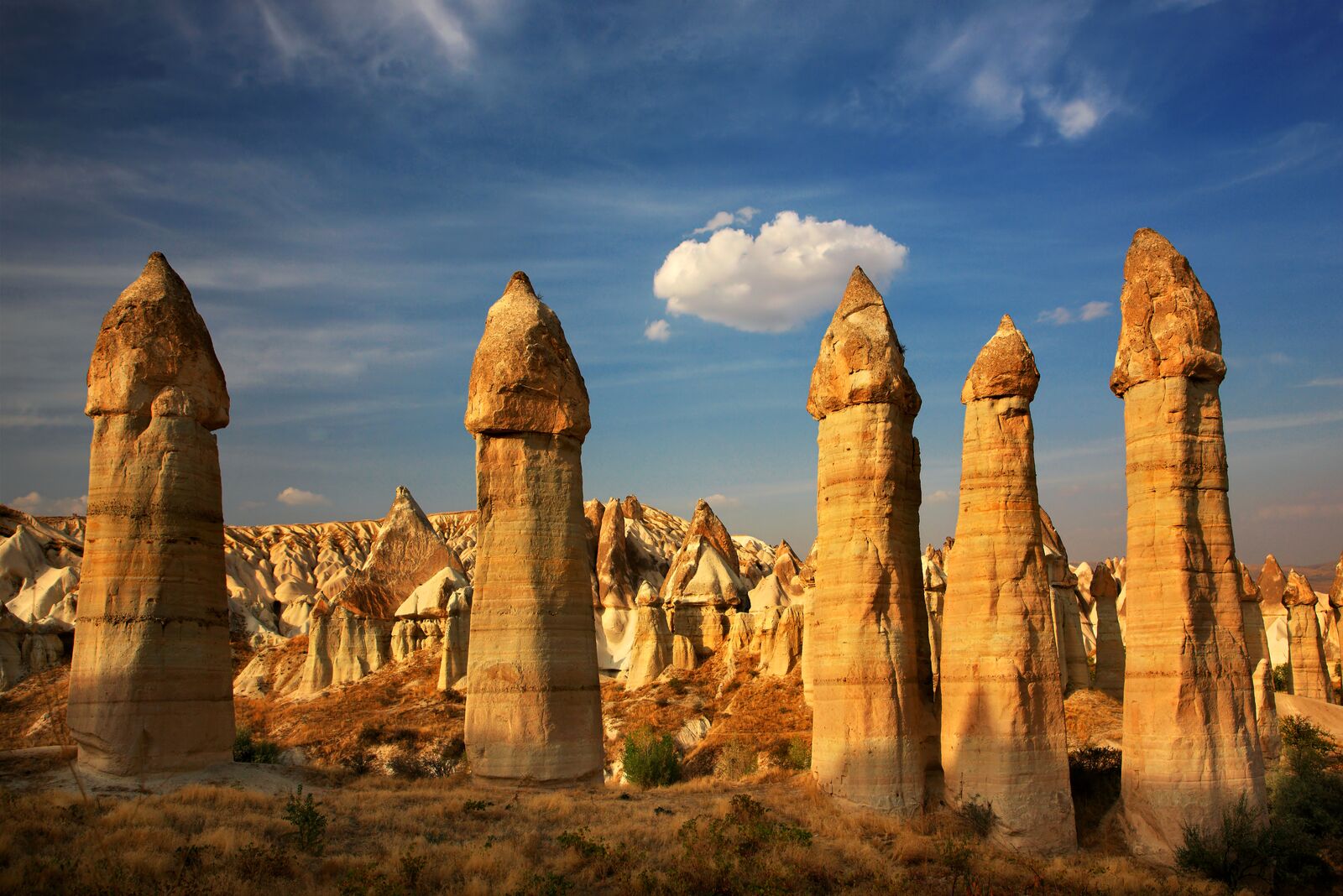 Beyond the whimsically named Pigeon, Red, Rose, and Love Valleys, the Cappadocia area is also home to the Meskendir, Zelve, and Zemi valleys, to name a few. Each has natural formations so varied and beautiful that it’s worth spending time on two feet to get a closer look. You’ll need to rent a car or go with a guided tour as the trailheads are a bit outside the city.

If you don’t take the popular sunset horseback ride through the Rose Valley, opt instead to hike the loop from Rose Valley to Red Valley and back. The rock’s surreal shapes become more intriguing as their colors morph near sunset.

For a longer hike, take the 7.5-mile loop passing through Pigeon Valley to Love Valley, then back to Göreme. While you don’t need to get up close to the formations figure out why “Love Valley” is so named, it’s worth doing the full hike to see the region’s spectacular topography.

To get a sense of how big an area these caves cover, explore the Ihlara Valley, about an hour’s drive away from Göreme. The valley is in a canyon 10 miles long and 100 feet deep that served as a monastery for a thousand years leading up to the 13th century. You’ll find thousands of homes and dozens of churches carved into the rocks, as well as the trailhead for the Ihlara Valley Trail. It’s about 6.5 miles round-trip and parallels the canyon’s Melendiz River. 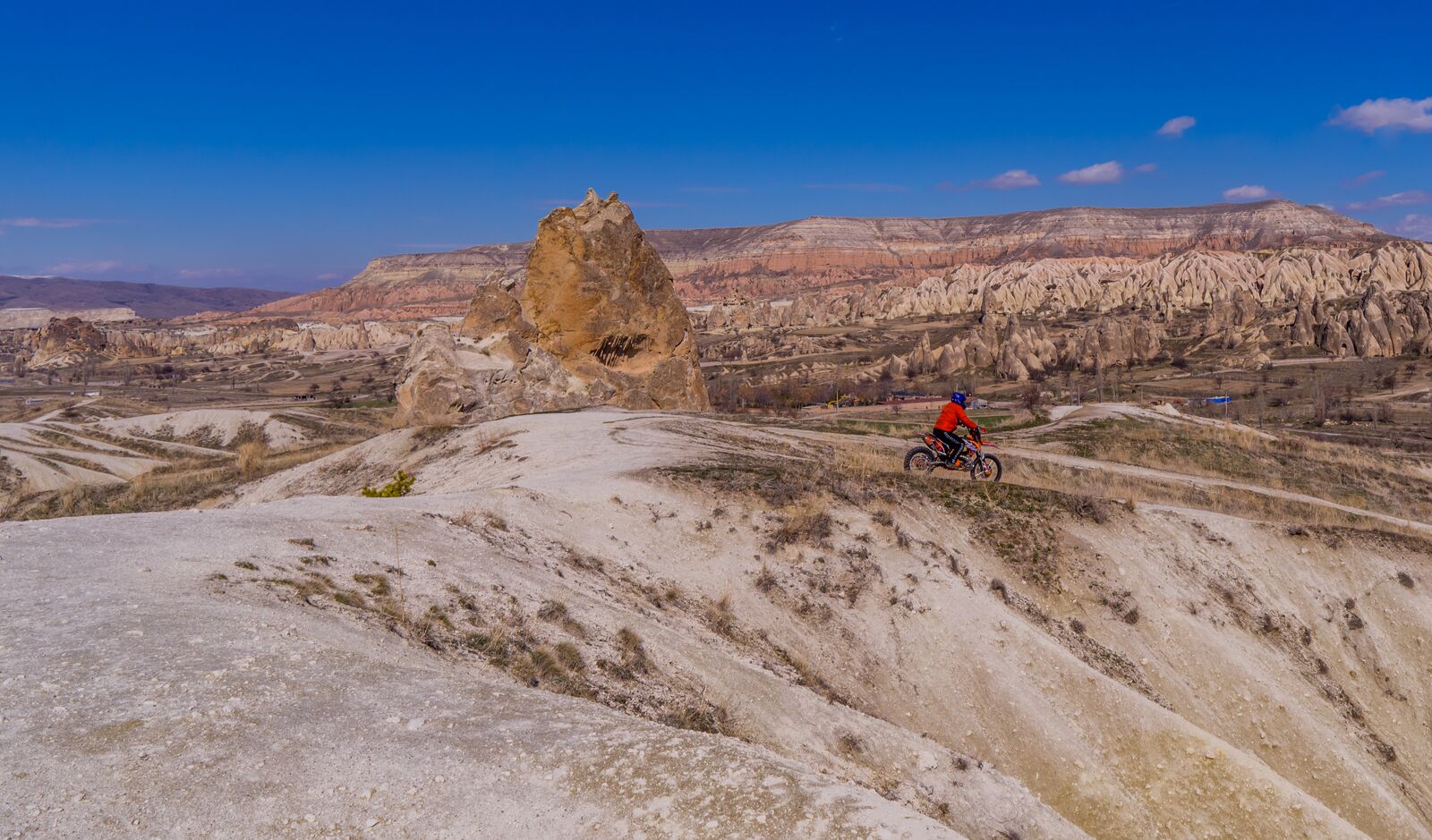 Cappadocia’s undulating terrain is also perfect for mountain biking. You can take single- or multi-day mountain biking tours with companies like Mountain Biking in Cappadocia, which offers everything from family tours and moderate rides through the Göreme Valley to 20-mile singletrack rides and multi-day trips. Tours start at $80 per person for a group of four people. You can also head out on your own; Mountain Biking Cappadocia and other providers rent bikes for about $45 per day. 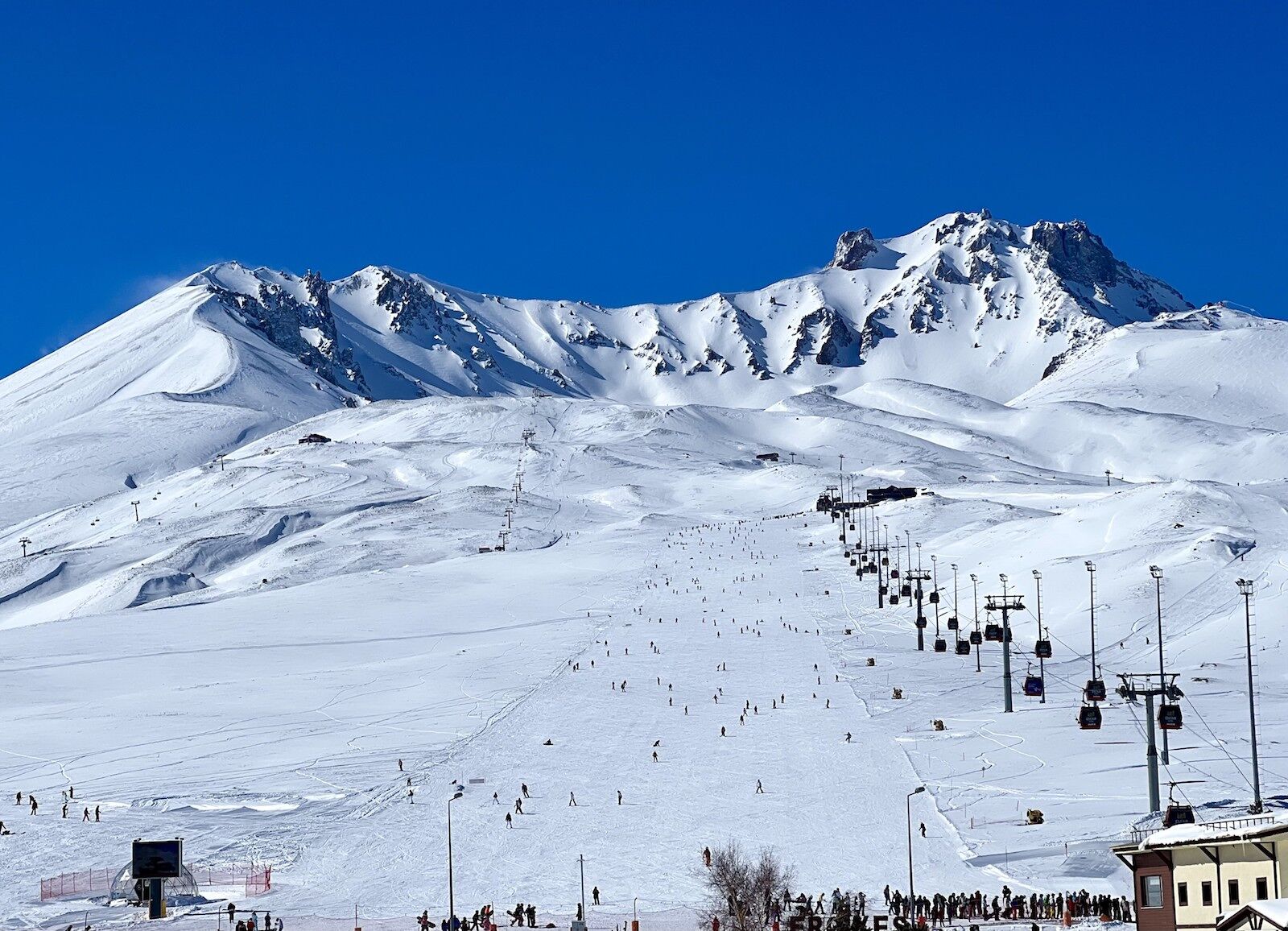 While the Cappadocia that most travelers think of is centered around Göreme, the entire region is much larger.

The Roman province of Cappadocia included the area’s tallest peak, Mt. Ericyes. It’s a dormant volcano that would be even taller than its current 12,850-foot height had it not lost its top when it last erupted 9,000 years ago.

Today, that volcano is home to one of Turkiye’s biggest ski areas, Erciyes Ski Resort. It expanded from a single chairlift 11 years ago to a resort with four base areas, 18 lifts, hotels, restaurants, and ski rental facilities. It’s an unexpected mix of modernity and local quirks; guests can take high-tech and high-speed lifts to the top before buying hot regional sausages grilled outdoors.

Another quirk is how tickets are sold: by the ride. A scanner at the bottom marks each time you get on the chairlift. But a 30-ride pass only costs 210 Turkish Lira, or about $15. Considering that the chairlifts go a long way up, you’d have to ski pretty hard to manage that many rides in a day.

Advanced skiers and snowboarders will want to jump on the Ottoman, the uppermost lift on the mountain. It whisks you to an elevation of 10,997 feet and feels almost as high as a Cappacodia hot air balloon ride. It drops skiers at the foot of Mt. Erciyes’s sheer, rocky crest, but judging from the festive crowd at the top, skiing back down isn’t the only draw. On a sunny Saturday in February, the snowy area was full of revelers taking selfies, drinking hot tea from thermoses, and even tossing back Jägermeister straight from the bottle.

Despite how tempting the mountain-top party is, you’ll want to get in at least a few laps. I stayed on the groomers, as they don’t control for avalanches at Erciyes. But the side terrain just off the groomers offered up some of the driest, fluffiest snow I’ve ever made turns on.

Just another great sensation in Cappadocia.

This article originally published in October 2011 and was updates with all new activities, links and information in March 2022.