No calendar day unites the world in revelry like New Year’s Eve. Whether you hunt down a fireworks-filled extravaganza you’ll remember forever or a booze-fueled bash you’re destined to forget, partiers across the globe tend to keep the festivities going way past midnight. A select few have even figured out how to ring in the new year twice. All it takes is a little (time) travel.

In recent years, private jet companies have hacked the International Date Line to offer New Year’s Eve packages that let celebrants wind down the clock on opposite ends of the earth — if they have a few hundred grand lying around. Luckily, there are easier, and cheaper, ways for partiers to use the time change to their hedonistic advantage. Here’s where to go to pull off a dual New Year’s Eve without blowing the next few decades’ worth of rent in one night. 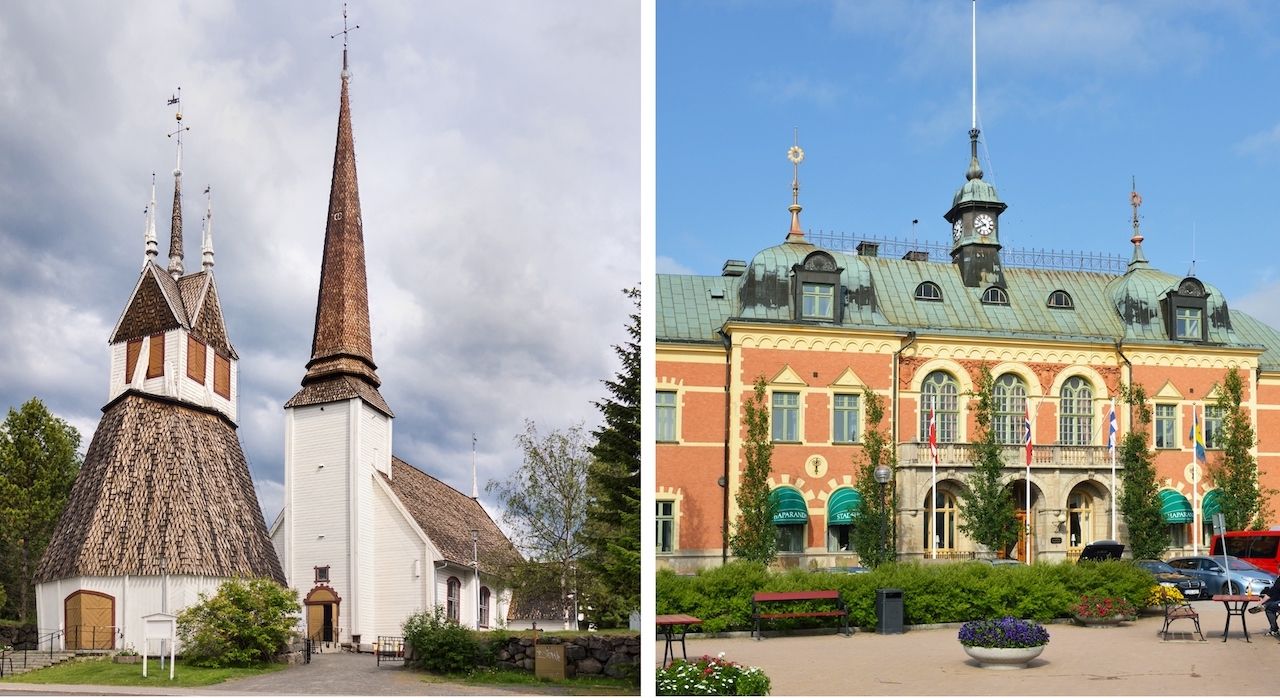 Neighboring towns Tornio, Finland, and Haparanda, Sweden, sit on either end of the Torne River, which not only draws a line between the Scandanavian nations but also their respective time zones: Sweden observes Central European Standard Time while Finland follows Eastern European Standard Time. Locals are used to border-hopping, and there’s even a golf course near Haparanda that entices visitors with the prospect of golfing in two time zones, but the best use of the divide rolls around every December 31. Start your festivities with fireworks in Tornio, then stroll across the river and double down on the Swedish side. Way up north in Lapland, where the sister cities are located, you might even catch glimpses of the northern lights that’ll put the still-spectacular, man-made light shows to shame.

2. New Zealand and the Cook Islands 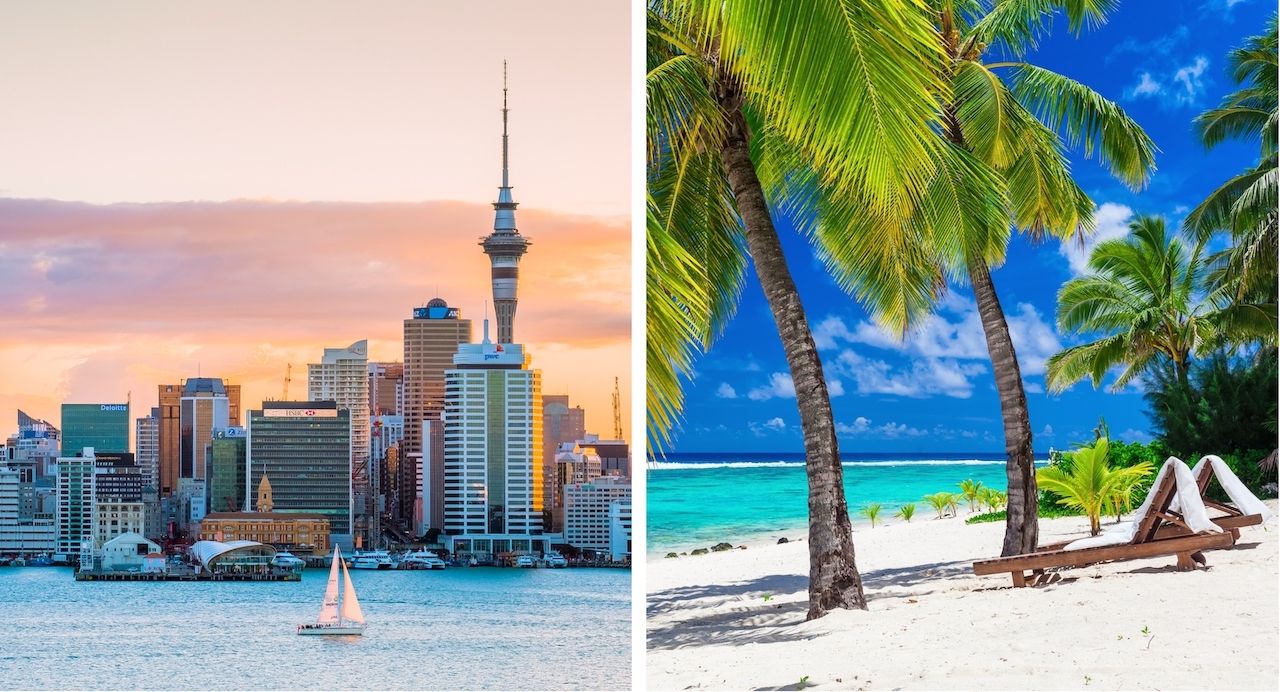 New Zealand is among the first places on Earth to welcome the new year. The Cook Islands, just a few hours away by plane, is one of the last. Depending on the time of year, the South Pacific nation is either 22 or 23 hours behind New Zealand, giving party hounds plenty of time to cross the International Date Line and celebrate in both Auckland and Rarotonga.

Auckland’s a wild place to party on New Year’s Eve regardless, with parties thrown throughout the Central Business District and one of the best fireworks displays anywhere in New Zealand. Catch the show from the Sky Tower overlooking the harbor, but don’t party too hard: You’ve got a flight to catch. An early morning trip from Auckland on January 1 will land you in Rarotonga, the largest and liveliest of the Cook Islands, around midday on December 31. There, expect beachside parties at the main resorts and some of the bigger bars on the island. Muri Beach is your best bet for a big blowout. Bars may close by midnight or 1:00 AM due to the local liquor laws, but we doubt you’ll be complaining about bedtime the second time around. 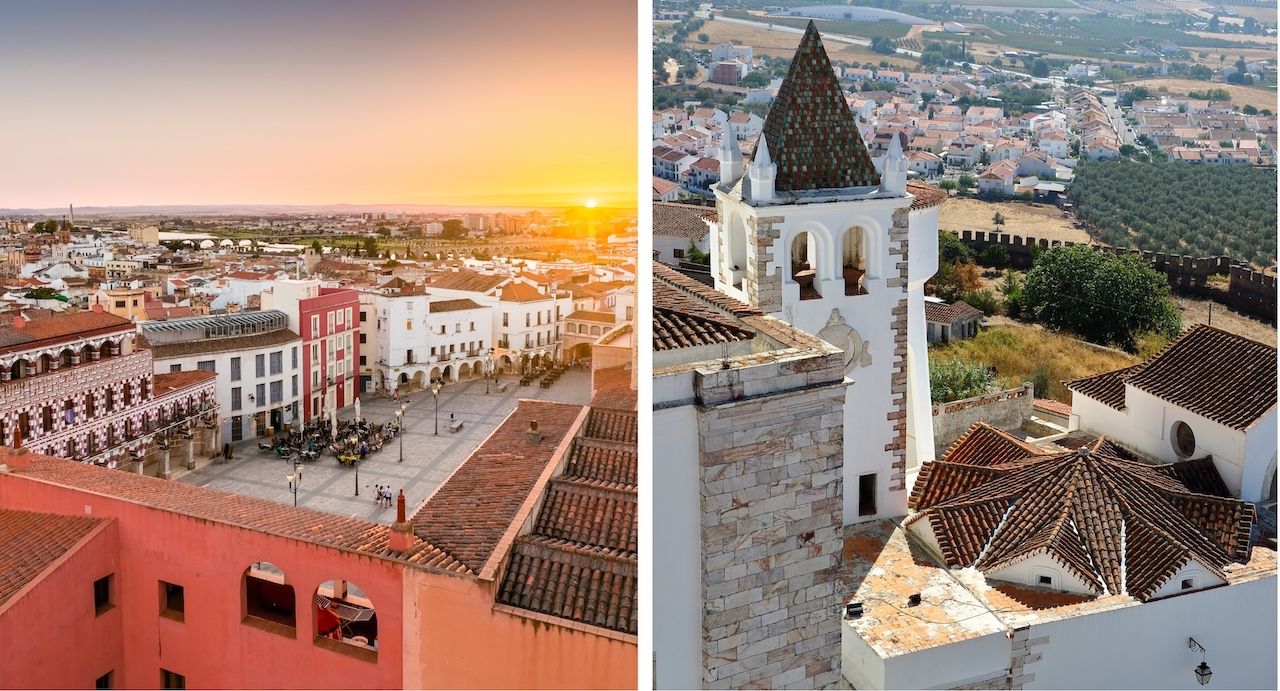 Spain and Portugal share the Iberian Peninsula, lending to similarities in everything from topography to cuisine near the border. What the two countries don’t share are the same hours, with mainland Portugal observing Western European Time and mainland Spain observing Central European Time. To do New Year’s Eve Iberian style, count down the clock in Badajoz, Spain, then head west to Portugal’s Alentejo region, a traveler favorite for food, wine, and outdoor adventures. Estremoz is roughly 45 minutes across the border by car, so you have just enough time to hop over and see how the party compares in the Portuguese city. Along with countryside scenery and white-marble architecture dating back to the Middle Ages, you’ll find a whole new crew of partiers to toast with when the clock strikes midnight. Again. 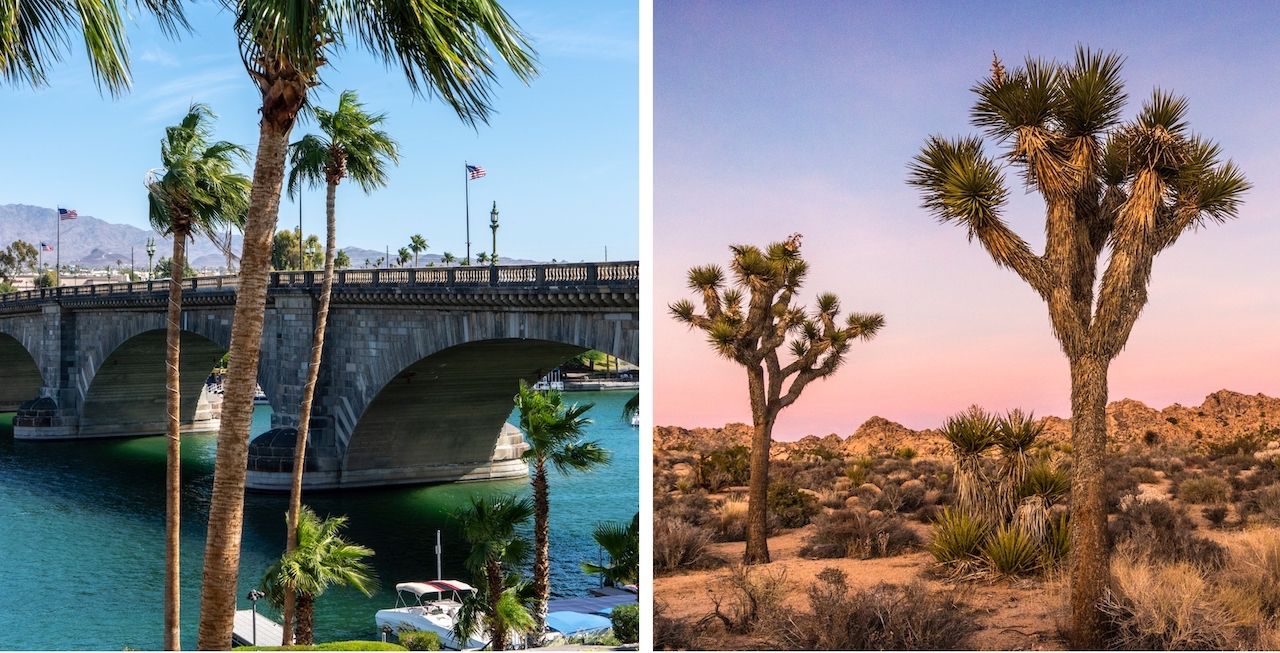 Needles, California, probably isn’t the West Coast destination you’ve been dying to see, but come December 31, it’s one of the coolest places to be in the Golden State. If you’re coming from Arizona, that is. Kick off the evening in Lake Havasu City on the Colorado River, a small but scenic city whose claim to fame is the London Bridge, the same structure that once spanned the Thames. A handful of local establishments and hotels, notably the London Bridge Resort, throw annual New Year’s Eve bashes, ending with fireworks over the water. Roughly 45 minutes across the river, Route 66 stop Needles will also have a fireworks display, but is best-known for opening into Mojave National Preserve, which may not lend itself to the wildest parties on the planet but makes up for it with views. 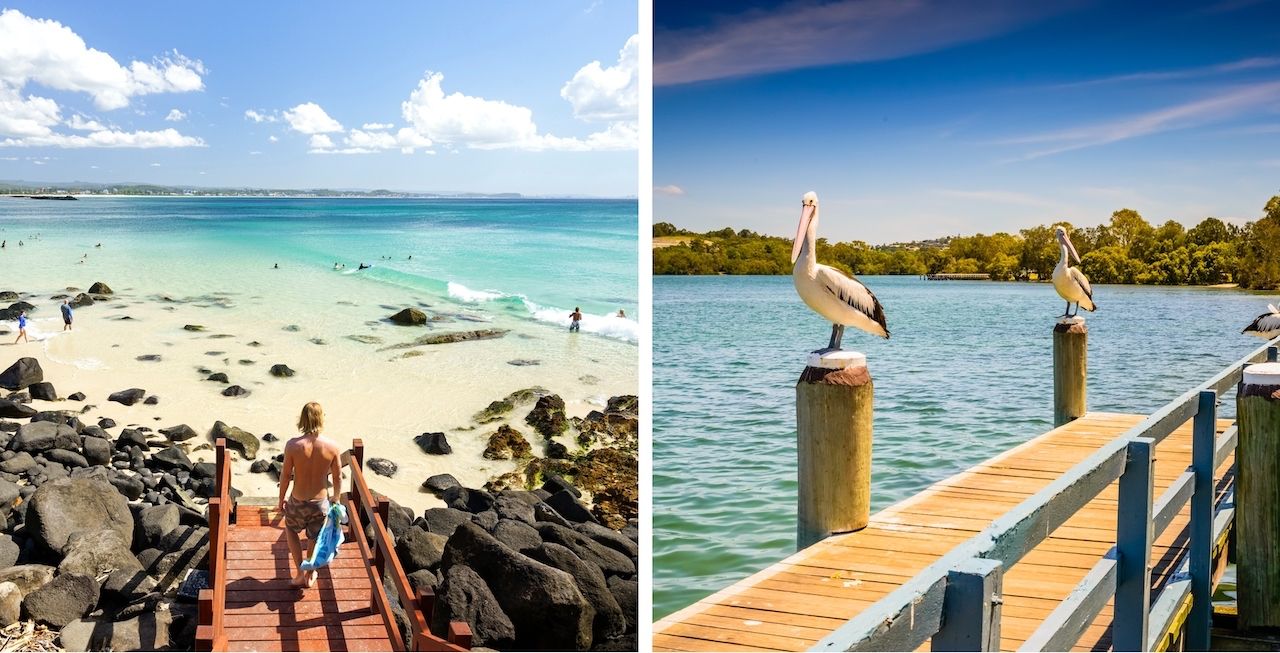 Australia’s big. Big enough to be classified as both a country and a continent, and big enough to be represented by three to five time zones depending on the time of year. Because New South Wales, the state that plays host to Sydney, observes Daylight Savings Time and Queensland, the state directly north, does not, the border between them sees twice the NYE action.

About an hour south of Brisbane, the capital of Queensland, sister towns Coolangatta and Tweed Heads across the NSW border celebrate together, making Australia’s party-famous Gold Coast an excellent choice for New Year’s Eve. To attend both parties, hit Tweed Heads first, then hop across Boundary Street to Coolangatta. Both towns are laid-back, surfy, and relatively suburban, but like everywhere on the coast, they know how to have a good time. For the bigger fireworks show of the double-dipped affair, make sure to find your way to Jack Evans Boat Harbour when you’re celebrating in Tweed Heads. 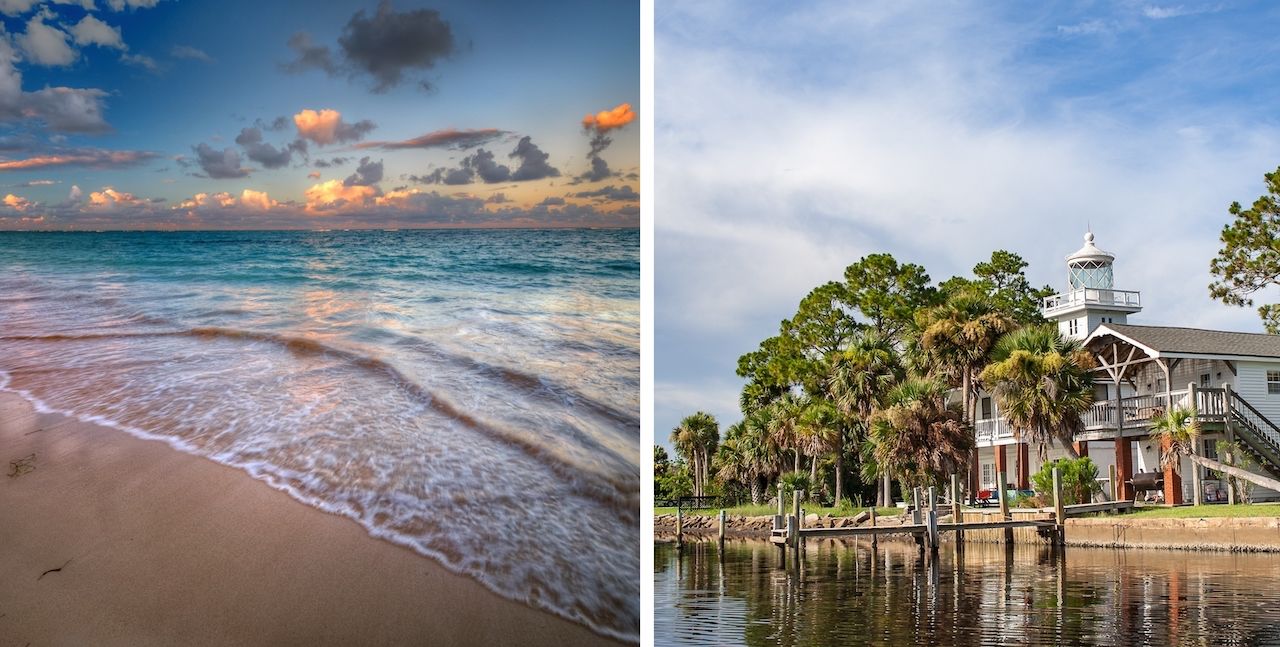 Florida’s Panhandle is split between Central and Eastern Standard Time, with the seafront towns of Port St. Joe and Mexico Beach located just five minutes from one another on either side. In the past, the two towns have staged a joint New Year’s Eve party called Celebrate Twice, complete with a daytime scavenger hunt, a double dose of fireworks, and a free trolley to shuttle revelers between the two time zones until 2:00 or 3:00 AM, depending on which side you’re on. Though this year’s festivities have been canceled in the wake of Hurricane Michael, it’s an event worth marking on your calendar for a later date, not only to see the Forgotten Coast in good spirits and enjoy twice the NYE festivities, but also to put your tourism dollars to good use.

LanguagesHow to say ‘cheers’ and ‘Happy New Year’ in 30 countries
Tagged
Holidays Trip Planning
What did you think of this story?
Meh
Good
Awesome